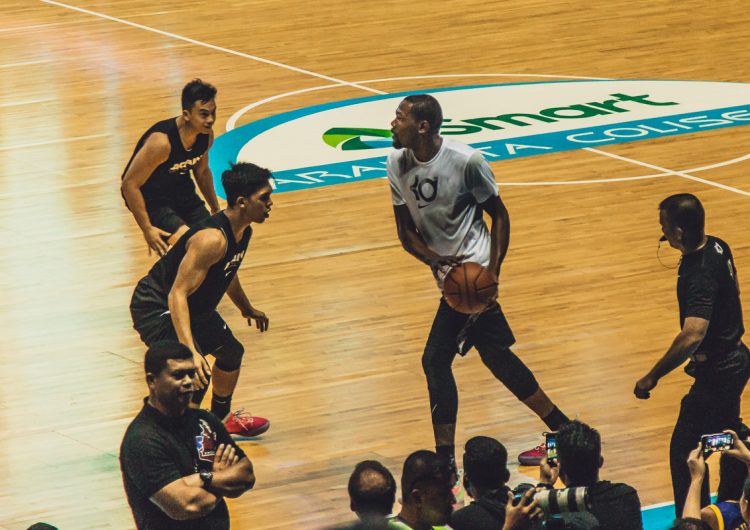 It was a normal day at work. It was quarter to 11 and I was just about to head to the bathroom after setting my stuff on my desk. On the way there I saw my boss along the hallway and she ecstatically approached me and said, “Hey Gab! I have a gift for you.” It was my birth month but I still wasn’t expecting any gifts from anyone.

She asked me if I wanted to cover KD’s press conference and game this Sunday. Immediately I was ecstatic. Yes, yes, a thousand times to seeing an NBA star in the flesh. And after that brief moment of pure joy I felt…sad. And then a bit pissed.

Something suddenly felt off. I was so happy scrolling through my Facebook feed until I saw KD’s game 3 dagger in this year’s NBA finals. My God, the heartbreak suddenly went back. I suddenly remembered that I fucking hate KD and the rest of the Golden State Warriors. 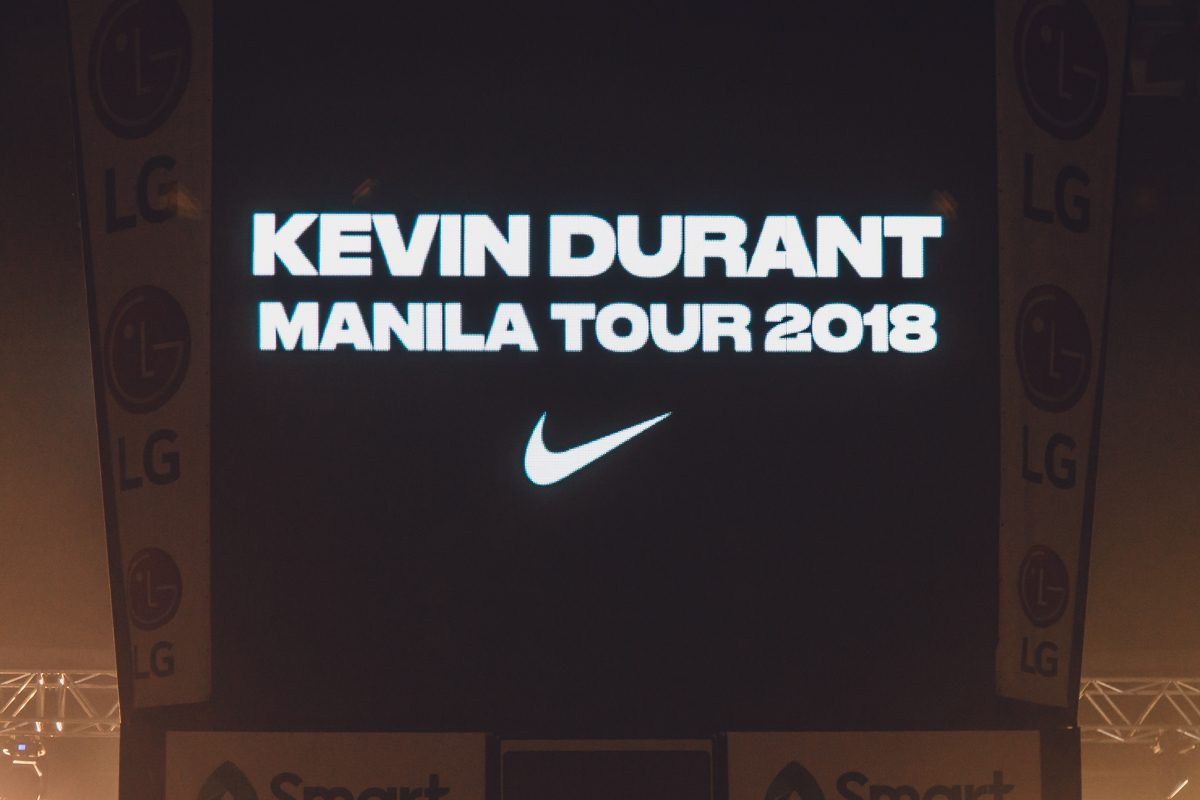 In case you didn’t know, I’m a diehard LeBron fan. If you scroll through images showcasing LeBron’s achievements in pages like Bleacher Report, ESPN, and what not, I’m what LeBron haters would call a Bronsexual. I’m the type of dude who loves to talk trash with his haters and if you argue with me, I would unleash hell on you if you didn’t love LeBron. I would argue with anyone, at any time, at any place on why he’s the Greatest of All Time. It was all fun for me and my fellow Bronsexuals during the whole Eastern Conference. I was literally losing my shit in the office every morning that there was a Cavs playoff game and even though I tried to be discrete about it, keeping my cultist type of fan-boying at bay was very challenging.

Sadly, after watching Toronto turn into LeBronto and laughing at noisy Celtics fans for taking another L, June came and it still hurts to remember the suffering I’ve felt from watching all four games of the finals. Despite losing to the anaconda—err I mean KD (and JR Smith)—LeBron had a great run at this year’s playoffs so at least I had something to be proud of. So I was like okay, maybe next year.

So I really didn’t know what to feel when my boss gave me the tickets. I’m like, “Damn, I used to love you KD but you just really had to ruin the NBA by joining the Warriors. So screw you (but I still wanna see you ball in person).”

While I was waiting for the days to pass, I was constantly on Twitter to see what was up with the NBA. Trades were happening left and right and big names were signing pretty big contracts, though the one thing I was happy about the most was that LeBron finally left a freaking awful Cavs team to sign with the Lakers. I was like fuck yes!! LeBron’s finally going to get some help and for sure stars would love to team up with him to beat the Warriors. Sadly, no one joined him but you haven’t heard the worst part yet: Boogie Cousins joined the Warriors.

Just when I thought that people were gonna team up with LeBron, my heart broke once again because I knew that I had to prepare for LeBron to lose again. I didn’t know my hatred for the Warriors turned into a numb feeling so now it’s kind of weird that I feel nothing and now I don’t know if I should be scared or what.

When Sunday finally came I promised myself I was gonna be unbiased as possible while covering, and as you can all see through the article, I failed and I don’t regret it one bit. When I got to the venue, damn the setup was amazing. It was like I was in a museum/shrine built for KD made by KD himself. His new shoe, the KD11, were displayed on a pedestal like it was an ancient artifact and there were multiple paintings of himself in different styles that were hung everywhere. When we were finally allowed to enter the conference room, the bleacher setup for the audience was pretty cool so I have to admit that I got pretty hyped for Kevin.

While I was preparing to take down notes, everyone suddenly started to become noisy. I dropped everything and glanced at the area they were looking at. They saw a black dude in a Golden State jersey walking towards the stage, and people were starting to cheer and take out their phones.

Turns out it wasn’t him. LMAO.

Disgusted, dumbfounded, and ultimately starstruck so I was like, “Yeah, I’ll give my Warriors-hating self a day off and just be in the moment to appreciate KD’s prescence.” During his interview with Nico Ramos, he was a pretty nice and humble dude so it wasn’t really hard to like him. It was all smiles for me until Nico asked him about what he was doing for the summer. He told everyone that he’s just trying to relax now and just take some days off but then he really had to say that, “It’s a great feeling enter into the summer knowing that you’re the best team in the world.” 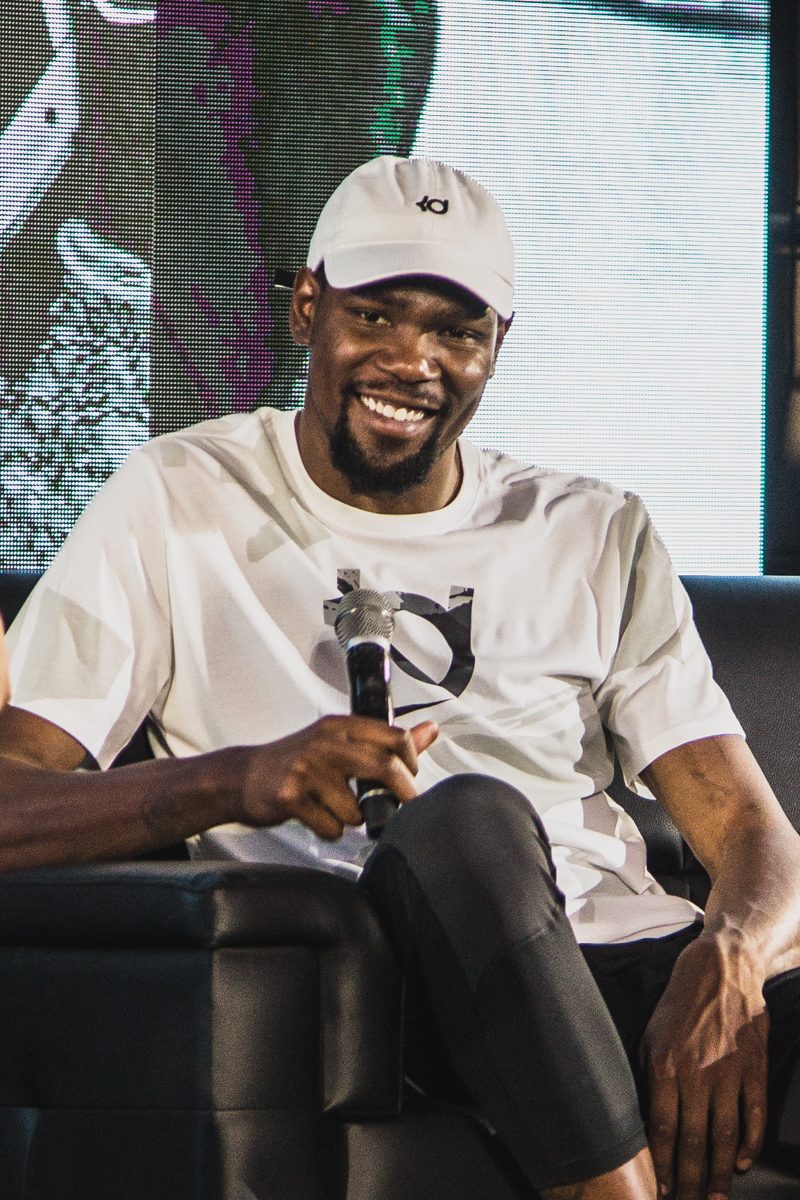 It was all rage from that point on. While he was continuously conversing with Nico, from the moment he said that “best team in the world” nonsense, I went mentally haywire. Fuck you KD, you didn’t have to rub it in.

Once the interview ended, everyone in the press conference immediately went to the Big Dome to watch his exhibition game with some of the best players in Philippine collegiate basketball.

Still in a state of disgust, I was expecting to watch KD as a Lebronsexual alone. While scanning through the crowd I found some friends of mine in the same area who hate KD as much as I did, though I have to admit it was kind of ironic of us to hate KD yet still watch him play.
Back to KD hater mode, I was so happy to see more haters than fans at the area we were at so watching him became a bit more bearable.

When he came to the arena, people were chanting “Russell Westbrook” and “OKC” so I tried to stay civil and not join, but as you all know I failed again. Ah, to return to the base hunger of talking trash. It feels good. 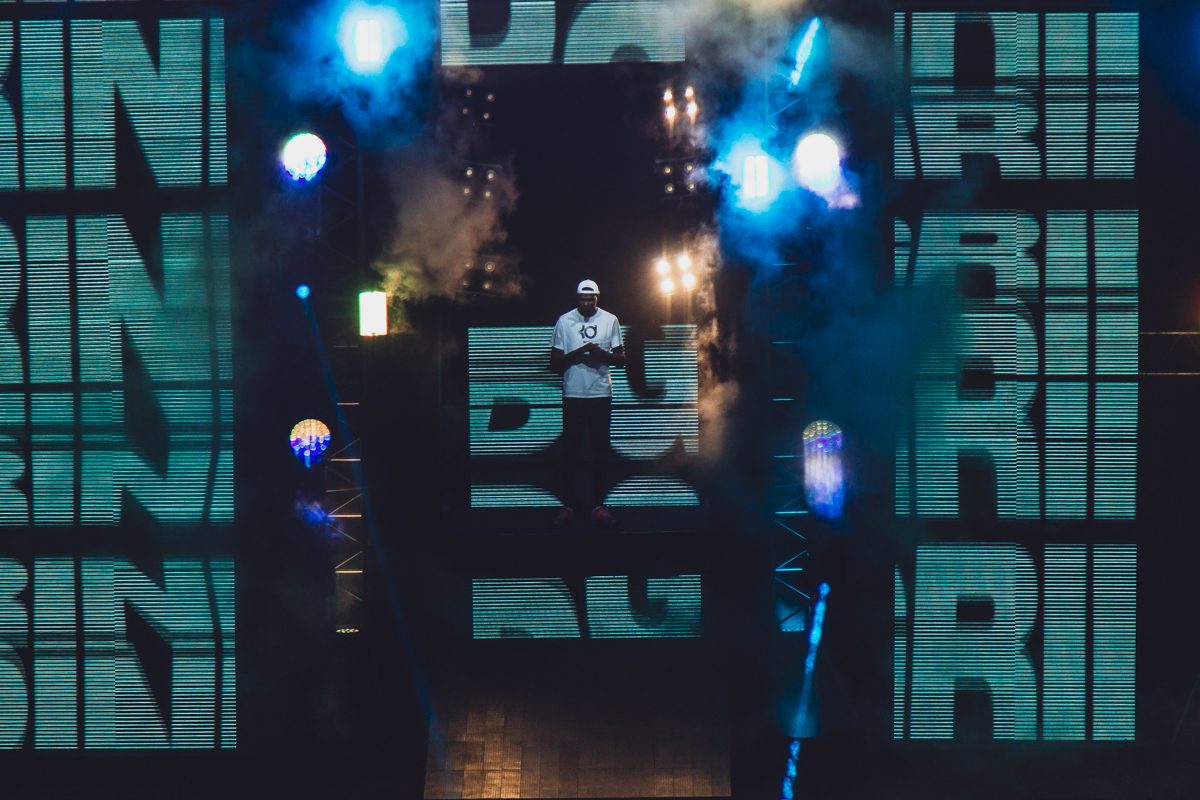 Boom Gonzales and MC Pao were hyping everyone up and the moment Araneta was getting wild, Boom had to kill the fun by asking everyone, “DO YOU WANNA SEE KD WIN 3 STRAIGHT TITLES?!” Half of the crowd said no while the other half said yes so everyone didn’t really understand what was going on at that moment.

When the game finally started, he was pretty chill the whole time not playing defense and all. Is he going to be like this for the whole game? I’ve seen pickup games from my barangay league that were more exciting.

Suddenly, in the middle of the first half, the opposing team committed a turnover and he went for a breakaway slam. I admit it was good to witness that in person.

Back to the game, you really couldn’t deny his skill man. It was like watching a demigod fooling around with mere mortals. Despite his effortless dunks and insane handles, everyone was getting frustrated because he couldn’t make shots that he was making all season. I mean come on, despite the fact that its an exhibition game, fans and haters too came to see him play and yet there we were, watching people score on him and miss shots that he makes all day.
Exhibition game or not, Kobe and LeBron wouldn’t have allowed that to happen. Come on! I don’t have a box score or any stats but man if I estimated correctly it feels like he missed more than half of the shots he’s attempted. 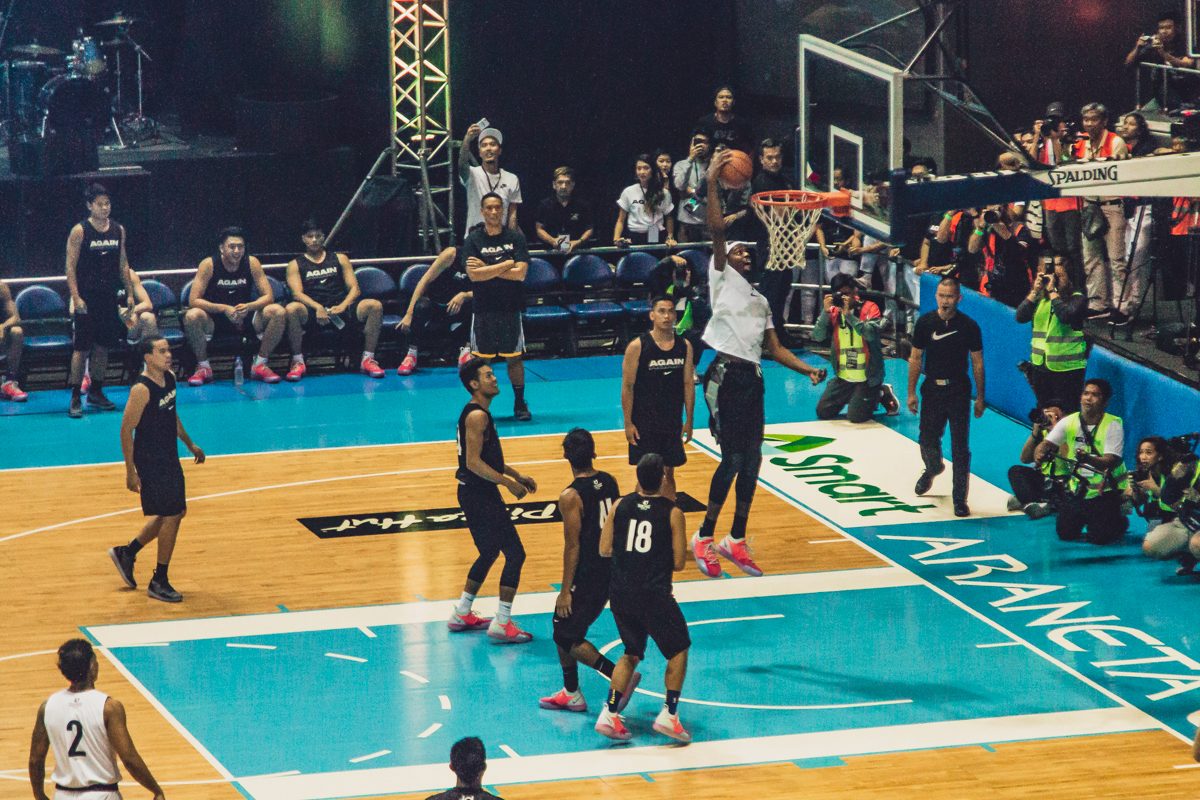 Or does he think we’re not worth the 100% he gives his other games? Was he like this throughout his Asia tour? Or was he just being a dick? I’d like to think the latter, because that’s how you are with people who stand in the way of your heroes; they’re instantly cast as the villains.

People were starting to get disappointed. It’s Kevin fucking Durant: two-time champion, two-time finals MVP, league MVP, and multiple time scoring leader. You don’t come and watch him and not expect him to put up a show! He made a couple of tough 3s which gave everyone hope that he was just taking it easy on the first few minutes of the game. Now here we are last few minutes of the game, the opposing team was leading by 3. Ball in his hands, 3 2 1, puts a shot up… It’s way off! So yeah I just watched KD lose! Don’t get me wrong it’s a different story if he went all out but still he lost! For a minute I was thinking, man if he played like this the whole season, ‘Bron could win another championship. But of course that can only happen in a perfect world come on now I’ll be realistic this time. 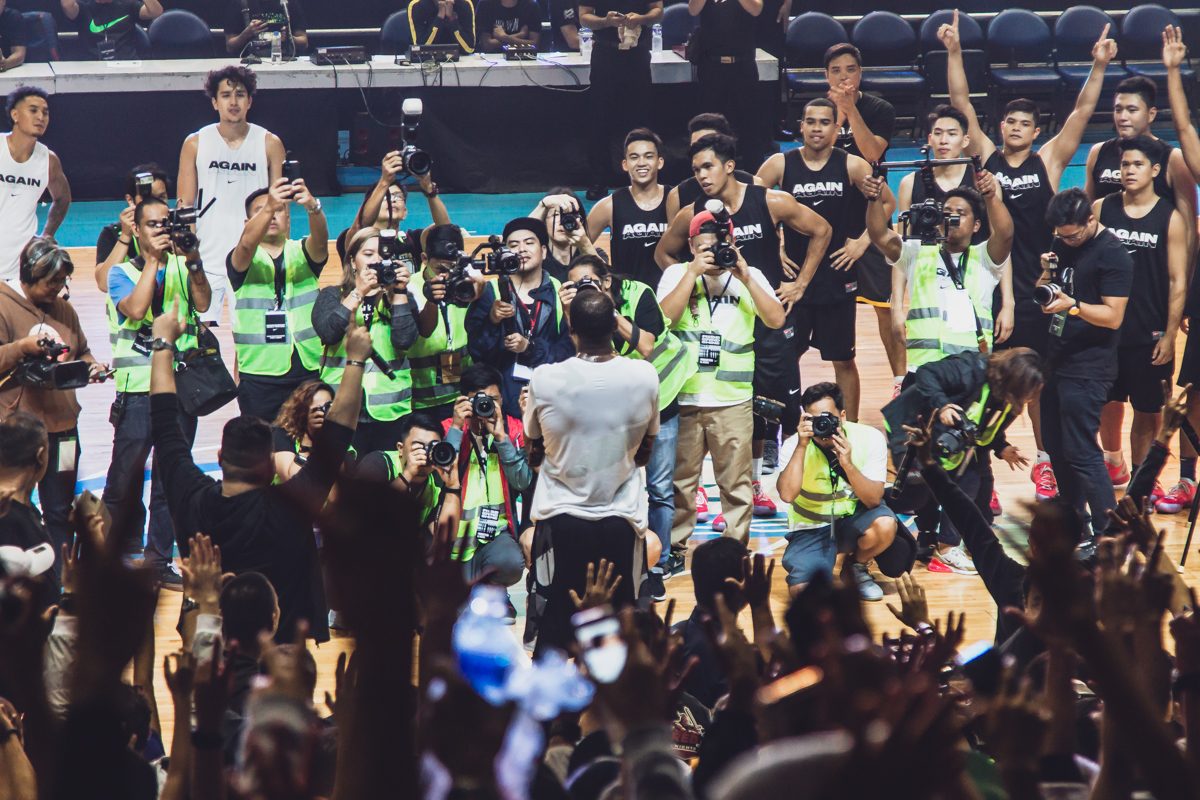 Once the game ended, it was all smiles as he went around to give fans some free basketballs. After a quick photo-op with the whole Araneta crowd, everyone had mixed feelings. Some were glad to just watch him, while others weren’t too satisfied with his performance. Setting all biases aside, everyone was expecting a blowout or some show stopping highlights, but hey you can’t have a good game every day. It just goes to show that KD’s human and despite the fact that I will always root against him as long as he is with the Warriors, I gotta appreciate how good he is.

I went into Araneta a KD and Warrior hater, and I left Araneta still a KD and Warrior hater. But now I gotta say, I appreciate him more and I’m thankful I got to watch an all-time great like him play. Shout out to my bosses Lex and Nina for giving me the chance the cover one of the athletes I despise the most! See you next season KD! Hate and love you (when you leave the Warriors) always!