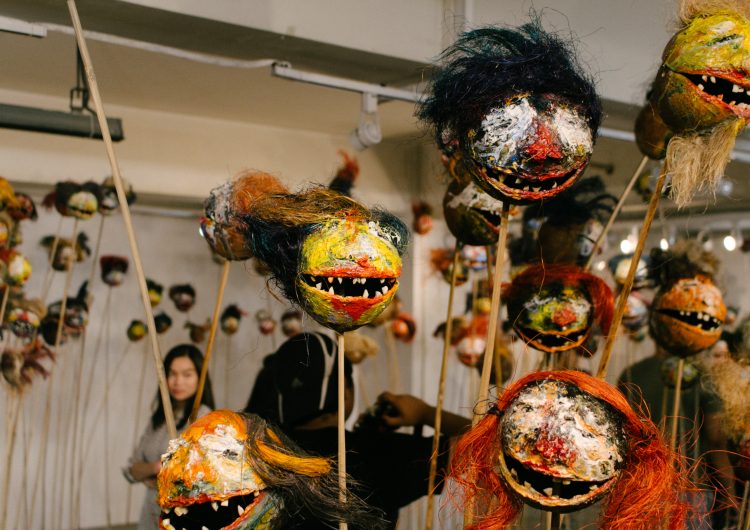 “Art should comfort the disturbed and disturb the comfortable.” Cesar Cruz said those words in one of his poems in 1997.  In the current, his words still stand true. To some, it has become the measure of the effect of artists’ work on their viewers. A standard of success at times, even.

On the second day of Art Fair Philippines 2019, we asked random attendees on the latter part of the famous line. In our path to art appreciation, we acknowledge the fact that we can love an artwork even if it doesn’t necessarily make us happy, excited, or bring us to momentary peace. Sometimes, the ones that authentically move us are those that tug a painful heart string,  keep us awake, or just make us effortlessly uncomfortable. After all, that’s way better than feeling nothing at all.

Is it the artist’s intention? Is the art’s message meant to be dark? We have yet to find out.

21/40 by Herman Nitsch
“I guess it’s in the photography section, there was a man lying down and his guts were like,  it was a big butchery area. I felt cool, but at the same time, I was like, “woah.” It was surprisingly very graphic. His guts were open. It’s kind of morbid but you’re gonna say, “Oh, it’s interesting.”” -Mm Vasquez, entrepreneur

Tiffany La Fuente’s works
“The artwork of Tiffany La Fuente, one of our exhibiting artists here [at Vinyl on Vinyl]. Her art is very sexually-charged. You have to look at it for more than a minute to really know what’s going on. It makes me uncomfortable in a way that it’s sexual but you don’t really know if it is or isn’t. But I still really enjoy her artwork.” -Bianca Ortigas, graphic artist

Neal Oshima’s works
“There was this exhibit with plastic insects. I personally don’t like insects but it’s interesting because it made it approachable with the plastic use. Natuwa lang ako because it’s something that I don’t like turned into art. It’s something interesting for me.” -Ryle Ugarte, student

“I guess the way it was presented kasi; may sound, ‘yung sound kasi it adds to the visual impact of the artwork. Kasi you’d see Inferno, Purgatoryo, and Paradiso side by side as well. So you know, it’s kind of dark. Actually, it’s not kind of dark; it is dark.” -Erwin Canlas, photographer

“The one with the eyes on the wall with teeth, and they were aggressively scathing. I loved it. I really enjoyed it. It was all black, there was a really dark room. There’s three walls apart. It was great. It was amazing.” -Punziella, artist

Khalil: “This one [Inferno Purgatoryo Paradiso by Ian Fabro]. We just got out of the Ian Fabro exhibit. It’s a really nice piece.”

Gabbi: “Super. I was telling him na I have to go out na kasi it creeps me out na. It’s disturbing in a good way.”

Khalil: “But I guess that’s the effect of the whole thing. Ganda. Galing.” [cont.]

Everything, Everywhere, Everyone by Olivia D’aboville

Khalil: “I was also fascinated by the corals by Olivia [D’aboville]. It was a nice piece too. -Khalil Ramos and Gabbi Garcia, actors

“I forgot the name but he’s the same guy who did the one last year with all the churches. There were bodies at the entrance [of the exhibit room]. -Gaby Novenario, writer

“‘Yung mga coconut heads, and each has a different face. Then when you look very carefully, their teeth look like real human teeth. So I questioned myself, “oh my god, are these real teeth?”” -Kleona Amoyo, writer

We love, love, love coming-of-age films. They often talk about the complexities of...

Here’s another bummer to join the mix: After Wanderland, UNKNWN.Fiesta and a bunch...