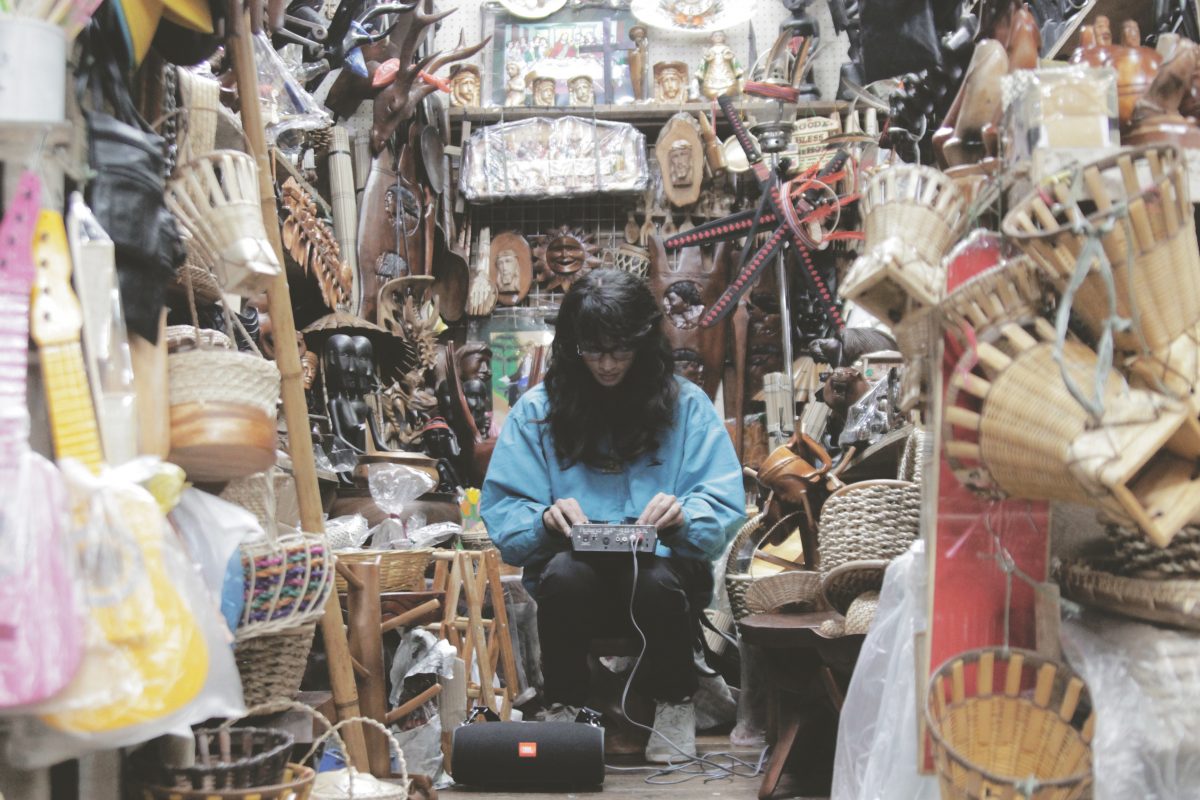 There’s a chance you’ve seen some dude resting his back on a telephone pole, his hands playing around knobs and buttons. And you can hear music. No, it’s not like some kind of EDM festival where the music shakes the ground and the people are close to the stage. There’s no stage and the ground is just fine, and the people are passers-by, doing their daily routine. The music is ambient but it’s distinct enough to stop you on your tracks. Chances are you’ve seen one of the live performances of Jett Ilagan, a.k.a. Escuri.

The music Escuri makes is as eclectic as what you might expect from that kind of title. I met Escuri a few days ago at a gig with other local artists. But I knew of him a few weeks back from the videos he posted of the live performances. Not soon after, Similarobjects also released a video where he played music out in the outdoors of Finland. It’s curious to look at music performances interacting with the environment, how it can interrupt routine and become an experience in itself.

I talked to Escuri himself about his live performances, his encounters with security guards, and his upcoming release.

I’ll ask straight up: What’s the reason behind your live performances out in the open, from Laguna all the way to Baguio?
This is a bit personal. When I started performing as Escuri I always thirst at performing at bars during gigs, but recently after a performance at a big event I had a deep realization that I’ve been performing at the same setting, with the same people who do my craft, the same audience (I’m not saying that I’m abandoning performing at bars and the same venues, though.) I started to ask myself…how about the common people who don’t have any idea that this kind of genre exists?

Can you tell me about how you did it?
Actually before doing the public performance stuff, I considered other things to explore other than performing music. I guess what I do for now is to study and explore the effect of sound to the environment and how it merges to the noise and natural sound. I also considered the effect of impromptu public performance in the eye of strangers and lastly how these settings affect my performance. I became excited and invested sa portable speaker and external mic to document the sound. I recently released an EP entitled ORBIT21 and used it as a platform to do the project. That’s why I toured from South to North.

Do you know other people doing this thing? Or have already done it?
Actually, no one. I also asked other people if they know someone so that I can collaborate with them, but sadly no one.I am pertaining to performing electronic music in public, but I’m certain that there are a lot of musicians (singers and instrumentalists) who perform outside.

Do you have a link to ORBIT21 so I can have a listen?
I haven’t released it online yet, but it’s a coincidence that the title of the EP is ORBIT21, and I also orbit in different areas while performing. It’s nice when things are going with your ideas. ORBIT21 is a collaborative work with 5 foreign artists from London, The Netherlands, Texas, & California.

how did you get the collaborators?
I knew them on Soundcloud, they’ve been good friends and inspirations since I started producing music. It’s the time when we didn’t have any followers and likes in our tracks, but eventually tides change and you can see them progress. They started to gain an audience and developed their own sound. I’m so happy to meet them and they are my driving force to continue my craft, and that inspired me to produce ORBIT21. 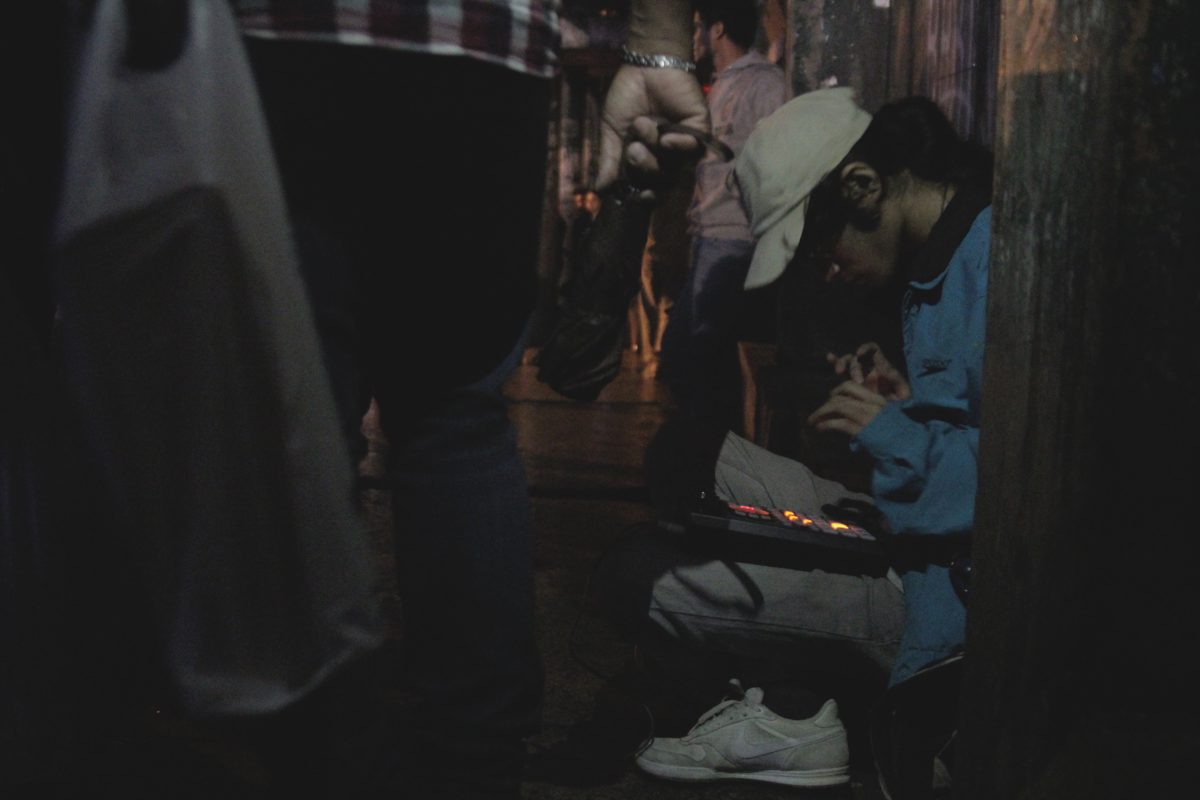 Going back to playing music outside, who do you think is the audience? Have there been any times where someone passing by has interacted with you?
I barely notice their reactions specially during the performance, but there are some people who wait for me to finish and ask what I did. Some take photos. There are also interaction with guards who restricted me from playing. I have a lot of stories to tell regarding the audiences. I guess what interesting about these public perfomance is that your audience is very diverse and always changing depending on the venue.

Tell me your favorite stories.
I performed sa underpass of Makati and I was restricted by guards, then I changed the venue to a nearby condo residence. After the performance, I noticed that may guards nanaman so I hurriedly packed my stuff, then while packing this group of guards gave me a thumbs up with a smile. Nakaka praning yung guards minsan, but unpredictable din sila. I also performed sa UP College of Fine Arts, I just brought out my stuff and started playing, [it was] very overwhelming lang, kasi after one track I heard them clapping, which is my first time to hear during a tour.

What genre do you classify your music?
I really don’t know! I love to explore different genres and merge them to create a different flavor, but I’m so fascinated with mathrock and experimental music. If you will hear my tracks and unreleased works you may somehow notice a signature of mathrock in it.

Are you part of any collective?
Yeah, i’m so blessed and proud to be part of Pixel and Buwan Buwan collective. Being part of their family opened a lot of doors to different knowledge and ideas regarding music and professional life.

What’s your process when you make music?
I have a lot of different approach in producing, but most of the time I create a track and when I feel like it’s time to stop, I stop. Then I create a new track, then after a while I check those unfinished tracks and add or remove different elements. It’s really a cycle until I feel contented.

What are your comments about Similarobjects’ video?
We have discussed this kind practice before, in fact before starting my journey he is one of the people who I told about my plans. It happened that he is also interested in this kind of stuff. That’s why I’m glad to see that he also performed at a different setting (at sa foreign country pa!)

Should people perform outside more?
I guess, it’s a hard question to answer at the moment.  It’s really exciting to explore public performance.

What do you want the audience to feel when they hear you playing out in the open? What message do you want to send?
We hear different sounds everyday: cars, trains, people chatting. We walk on the same road on our way to home, we wait on our drawing class outside the classroom on the same spot at the same time, we buy stuff at the same market and get used to this routine. We are used to hearing and seeing these things. By playing these passers-by euphoric music, I want to bring them to a different dimension, I want to suddenly change their routine, what their used to, and I also want them to feel the happiness I feel when I perform my music.

For our May-June 2017 issue, we interviewed six different personalities in an attempt...

Can you believe it’s been three years since “The 20/20 Experience” dropped? Okay, it’s gonna be...