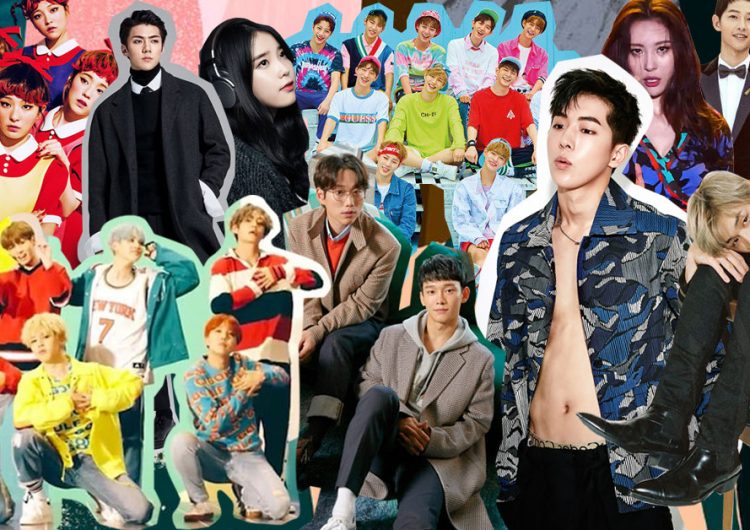 While we’re already at the first week of 2018, we want to bid a proper goodbye to Korean pop culture in 2017. It’s definitely had a lot of its ups and downs (including actor Kim Woo Bin’s diagnosis and Big Bang’s TOP’s overdose), and we’re here to settle the best of 2017’s trendsetters and newsmakers. We’ve got BTS, EXO, Twice, and more on the list, as well as a small farewell and tribute to SHINee’s Kim Jonghyun.

We all knew K-pop was already global thanks to second generation pioneers like Big Bang, Super Junior, Girls Generation, 2NE1, and DBSK. But BTS has broken down even more international barriers through actually performing at the 2017 American Music Awards (shitty camera work for that number, but you’ll get there, America) as well as guesting on popular talk shows in the US, such as Jimmy Kimmel and Ellen. Recently, BTS leader RM even collaborated with American pop punk band Fall Out Boy. Until now, the K-pop group continues to break international records and is in the running to becoming one of the biggest bands in Hallyu history.

2. The Produce 101 effect and the rise of Wanna One

The second season of idol survival show Produce 101 aired in April 2017 and was met with even more success than the first series. Lots of scandals and so-called ‘evil edits’ here and there, but anyone who’s finished the show can admit that it was extremely fun to watch (and seriously, which K-pop fan wasn’t singing “Nayana” over and over). 11 members of boy group Wanna One were chosen by ‘national producers,’ with the band turning into 2017’s biggest rookie idols. Not only did this result in the wildest achievements for a rookie group (there’s literally too many of them to mention; see everything here), but it also resulted in the production of more idol survival shows such as The Unit and MixNine.

But who could forget the year’s trendiest idol ever—Kang Daniel. This guy’s popularity is no fucking joke. The Wanna One member and overall Produce 101 season 2 winner rose to fame in such a brief time that he was named the second most influential man in South Korea, next to their newly elected president, of course. Daniel has graced numerous magazine covers throughout the year and has been topping advertising/brand reputation lists in the second half of 2017. Hell, his face was all over New York City’s Time Square for his 21st birthday in December. The so-called ‘Kang Daniel phenomenon’ is real and it’s really only just begun.

Actor Nam Joo Hyuk got bigger after Weightlifting Fairy Kim Bok-joo aired, stealing hearts not only in Korea but all over the globe as well. While his other drama, The Bride of the Water God, didn’t do as well than his previous one, the hype around him continued to persist, especially right here in the Philippines. Filipinos went nuts when local brand Penshoppe announced the prominent K-actor as the clothing company’s newest face. Now, when’s he coming back for another fan meet? I mean, his BFF Ji Soo is coming over next month already.

A lot of female idols have come out with solid releases in the year, but none of them surprised as much as solo artist Sunmi, earning herself a spot as one of K-pop’s queens (watch out, Hyuna). The former Wonder Girls member’s summer comeback “Gashina” was a hit both in Korea and abroad. Though it didn’t win as much on music shows and year-end countdowns, the song topped a number of charts all over the globe and virtually everyone in Korea as well as every international K-pop fan knew the iconic dance. Let’s not forget when she switched the parts of her male and female backup dancers too.

Girl groups have come for blood this 2017. SNSD makes a much-awaited comeback. BLACKPINK’s “As If It’s Your Last” was stuck in everyone’s heads during the beginning of the year. Twice continued to go strong after their hits “Signal” (for which they won a MAMA award for Song of the Year) and “Likey.” Red Velvet’s “Red Flavor” was a massive summer hit and “Peek-a-Boo” takes a strike at the patriarchy. Other girl groups such as GFRIEND, Gugudan, EXID, and more produced comebacks that pretty much made the entire 2017.

IU was on the down low back in 2016, save for her internationally popular drama Scarlet Heart: Ryeo. Musically, she wasn’t really that active following her controversial lyrics in her 2015 song “Zeze.” But 2017 marked the year of IU’s musical comeback. Her track “Palette” (with Big Bang’s G-Dragon) was named one of the songs that took Korea by storm, and her album of the same (which she served as primary lyricist and producer) named received critical acclaim. IU also won Best Female Artist at the 2017 MAMAs as well as the Melon Music Awards’ Album of the Year prize, where she broke the four-year streak of only men claiming the award. Her success speaks eons for herself and it’s more than safe to say that this bitch is going places and she’s still K-pop’s number 1 darling.

8. This year’s musical collabs are spot on

We’ve already mentioned BTS’ RM and Fall Out Boy. BTS was also known for their track “MIC Drop” that featured DJ Steve Aoki. R&B artist DEAN collaborated with international singer Syd. EXO’s Chen had a song with K-indie suit 10cm and another with Dynamic Duo. There’s also Kris Wu (who bowed out of K-pop after that whole lawsuit with SM Entertainment but whatever, I guess), who came out with a track with Travis Scott. We’re hoping for more inter-genre and international collaborations that will shake 2018 even more than 2017 did.

The list of couples that were in the spotlight this year is far too long for us to remember each one on it, but some of the most famous ones were Nam Joo Hyuk and Lee Sung Kyung (who broke up not long after news of their relationship came out), former SISTAR member Bora and Feeldog, Seo In Guk and Park Bo Ram, and of course, surprise newlyweds Song Joong Ki and Song Hye Kyo. The Song-Song couple made every K-drama fan’s OTP dreams come true and was the biggest celebrity wedding this year.

EXO’s hit track “Kokobop” was far from the only thing they were highly recognized for this 2017. They were also applauded for their sense of style, most prominently members Oh Sehun and Park Chanyeol. Sehun garnered attention after making an appearance (a best-dressed one, at that) at a Louis Vuitton fashion show while all eyes were on Chanyeol (who stole the spotlight from model Gigi Hadid) during Tommy Hilfiger’s Fall 2017 launch. The rest of the group were also lauded for wearing beloved fashion brands and recognized for their individual styles.

While we don’t want to end this story on a sad note, it’s only right and proper to pay respect and tribute to SHINee’s Kim Jonghyun, who passed away in early December. SHINee was considered part of second generation K-pop, who brought the genre on a more global scale in the late 2000s. Member Jonghyun himself was praised by fans and colleagues in the K-pop for being a talented producer, artist, and songwriter. Many remain in mourning for the untimely passing of the idol, with a large number of groups and soloists in the industry wearing all black during 2017’s year-end song festivals. We remember Jonghyun for his light, love for his members, family, friends, and fans, his inspiring talent, and his fierce bravery in standing up for mental health awareness and LGBTQ issues.

We all know that December is a month filled with friends, fun, and...

By Kathrina Crisostomo I’ve never had an experience that has ever come close...