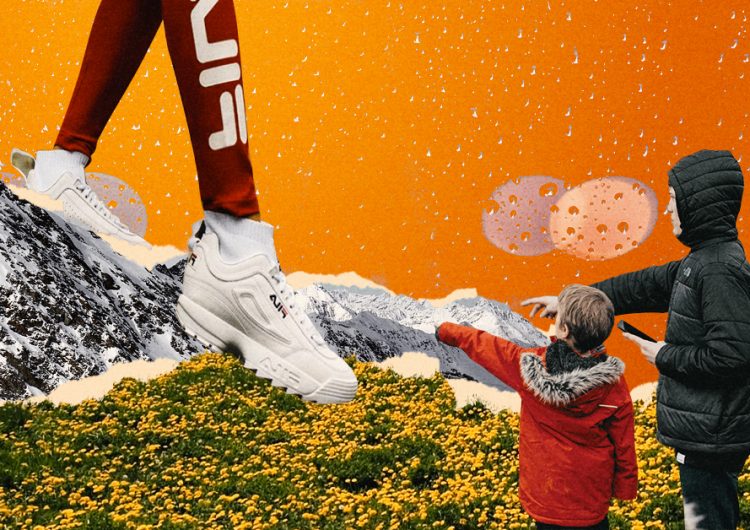 This story is not about FILA Disruptors, the whitest, chunkiest shoes you can get in shopping malls near you this December of 2018. This is not about how, in the latter months of 2018, the surge of the 1990’s silhouette has peaked, and with FILA Disruptors emerging victorious as the go-to shoe for their intended target markets, you can see these shoes not only on the feet of passerby, but also on the displays of many sneaker stores. This story is now about how, just as something “goes mainstream,” there will be a force that will treat this popularity with disdain. This time it is in the form of derision, of invisibility, of ignorance towards this newfound affinity for the shoe.

An IG story I saw

Here is a list of things I can reach: a glass of water with two melting ice cubes and two slices of lemon given to me by Louise when she heard I had been coughing for two weeks; a Klean Kanteen that does not belong to me; a tin can labelled “Brownies” from Bryan’s mother; an opened box of small chocolates, also from Louise; a pair of scissors; a pair of Suicoke knock-offs; small plastic; earphones; a thousand-peso bill. Nothing is out of place. Sometimes things are in natural disorder despite what other people think.

When I give gifts, I write down what’s on my head, most likely an apology or a haphazard thank you, and tack it on the gift unsure if it’s going to stick or not. I never give the gift personally unless it is my last resort. I would rather leave it on the desk, on the bed of their room, or through their P.O. box. Sometimes, I would not even wrap the gift. I would tuck it under a book, or have it arranged neatly in their room as if it was always there.

Here is a list of things I can reach: a glass of water with two melting ice cubes and two slices of lemon given to me by Louise when she heard I had been coughing for two weeks; a Klean Kanteen that does not belong to me; a tin can labelled “Brownies” from Bryan’s mother; an opened box of small chocolates, also from Louise; a pair of scissors; a pair of Suicoke knock-offs; small plastic; earphones; a thousand-peso bill. Nothing is out of place.

A person opening a gift I gave them in front of me is one of the last things I want to see, ever. Each unwrapped gift is a promise. A promise the giftee tells themselves each payday after paying their bills and maybe setting aside some of their cash for savings. They tell themselves what they’re going to get the moment they have enough money for me. When I hear my friends talk about what they aim to get, what they sincerely want to have, I can see them travel through time to the moment they knew they wanted that certain something. It is a face of supreme joy, that fades as quickly as it has revealed itself. It is a ghost that lingers and rests on their shoulders and backs until they get what they want. This is why people slouch.

Here’s all I want this Christmas:

The rules of visual merchandising dictate that in a store, particularly a boutique, everything is arranged intentionally. That nothing is out of place. That attention is warranted and that the job is done when you pause or take a look. Everything is arranged for you. Elements that are contrary to these principles spell resistance. Each path is supposedly the path of least resistance. Each path aims to be a frictionless surface.

I am the consumer. I want to blend in.

Writing a feminist flick? Learn the ways in this exclusive workshop

At last, a screenwriting workshop for underrepresented folk ℅ Women in Film x...