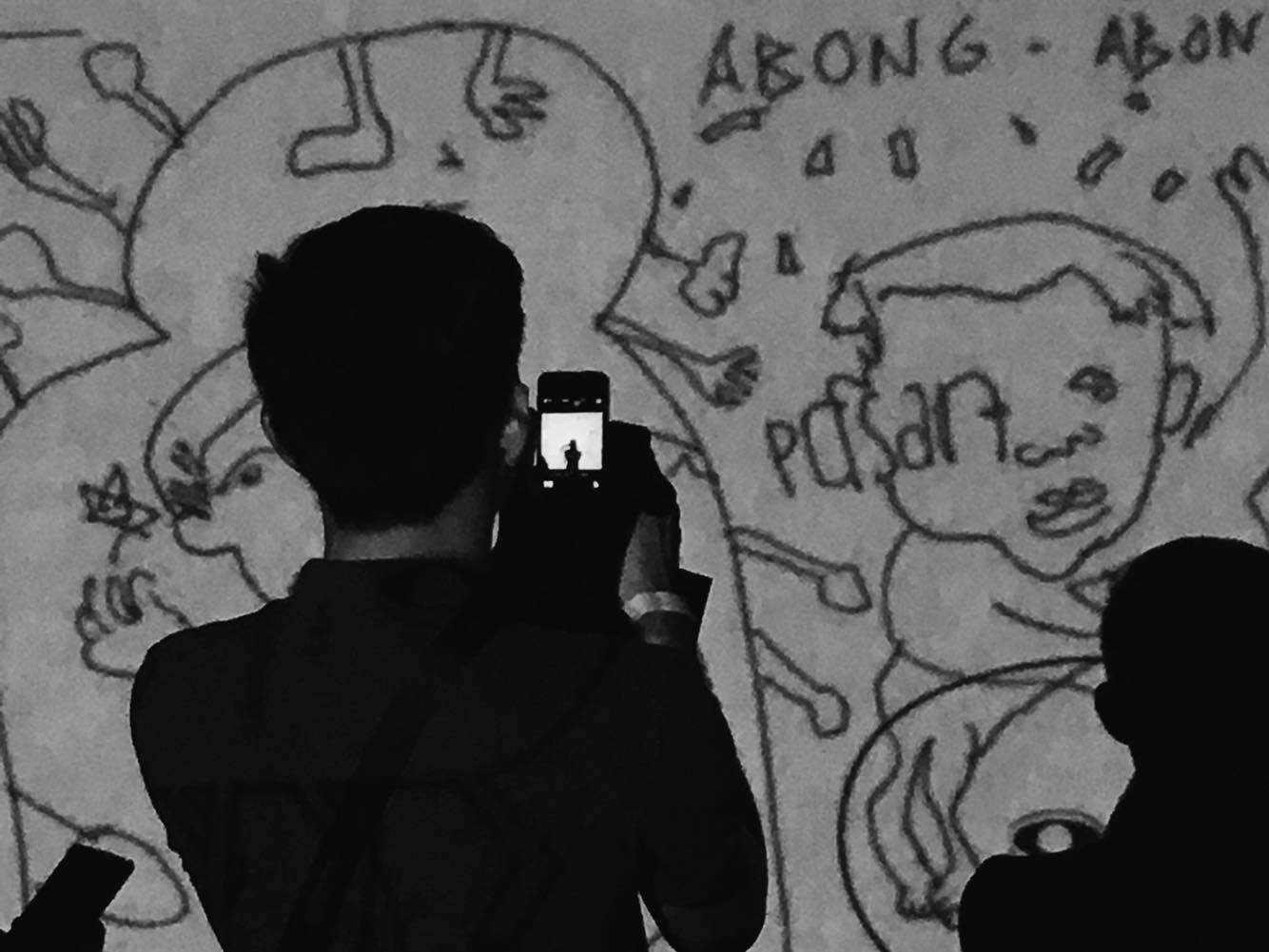 I don’t have the numbers, but I think the most-Instagrammed photo from this year’s art fair was the selfie.

I noticed it 10 minutes after entering: All these people, phones and DSLRs in hand, taking photos of the many, many works of art. But moreso someone else standing in front of an art piece, taking a photo of themselves beside or in front the art. After one or two or three photos, he or she would move on to the next piece they would consider picture-worthy. Probably for the ‘gram. You can check for yourself though the hashtag #ArtFairPH or by looking for photos by location. Let’s just say a lot of people took photos with the works of art.

I don’t find any problem with that, though. It’s the way they consume art. This photography-inclined culture speaks more about the culture of art appreciation.

I went to the Art Fair last Saturday with a friend. I made sound by holding hands at the WSK exhibit, I drew at Dex Fernandez’s exhibit, and I paced back and forth at all the different works of art. I walked up two flights of stairs to a sadly drenched and windy rooftop. I didn’t get to go to any talks.

But I did try to see all the art.

Because if you’re one of the 30,000 people expected to visit the fair, you would know the situation when you enter: lots of works of art and a lot of people trying to take a look at each and every one. You would already figure by the line to the elevators at The Link. And you would already figure with the phones and DSLRs in their hands as they aim to take pictures. It’s really a sight. When you take a step back and turn your head to the whole room, on every corner, people were taking photos.

When I was there, I felt a little bit anxious.  I don’t know how to appreciate or enjoy art without having the sense of urgency to move on to the next piece. Should I get a glass of wine, point to a piece, and talk about its merits? Or should I take a photo? The last thing I want in appreciating art is a set of shoulds and shouldn’ts. Don’t tell me how I should appreciate art!

Of course, there’s etiquette. I see posts of artists and photographers disgruntled at how the art mounted on the walls and sitting on the desks and tables become a mere backdrop. I heard that the lines were so long one night that people weren’t able to come in. I also heard a story of a piece knocked to the ground because someone bumped into it. And I actually saw people touching the canvas of an art piece.

I can’t claim that all these stories are true but the possibilities can’t be discounted. Works of art most probably mean the most to the artist who made them. The thought of your work of art rendered into a simple backdrop for a photo must be disheartening. And for it to fall to the ground? That’s heartbreaking.

It’s fatigue, really, for both the guest and the artist. This rhythmic swaying of people going around the galleries. These exhibitors trying to keep people in line without scaring them. These artists roaming around, probably incognito, looking at how people react to their art. This aura of non-belonging and performing in what appears to now be a social event.

After Art Fair, many works of art will go their separate ways and will end up in different spaces. Many of the pieces will be sold to private owners. The space will return to becoming a car park. The art fair may be the last time all these works of art may be found in one roof. I get why people are taking photos. They see this as an opportune time to immortalize the moment of having to experience that art. Including themselves in the picture is just validation. Childish Gambino was right when he said “but we don’t take pictures, when you’re rich you just see it again” on that Sway In The Morning freestyle. It’s true, isn’t it? The difference between the poor and the rich is a big part in how accessible art is, when it shouldn’t be that way.

When you think about it, was already an art fair before the actual Art Fair because of the “10 Days of Art Fair” project. In fact, I think they had the right idea: Installations and exhibits right in the smack middle of the city, without any walls. I hope those exhibits find permanent fixtures out in the open. God knows how art should be available to the public. I think art should be more readily available that way.

And art really is everywhere depending on your perspective. The idea that works of art should be housed in clean white walls does well to maintain the quality of the pieces, but it’s time to reconsider letting art out to breathe. Not that it hasn’t been done or that it’s a novel idea, but alternative spaces — spaces where art can disrupt, if not thrive — should be considered to reach everyone.The interest is already there. More and more people are visiting Art Fair Philippines if the Instagram posts and the expected guests over the years would be believed.

But what’s the next step in creating a culture of art appreciation? Where will the people go after? How can people appreciate art when experiencing it becomes an exclusive, yearly event? 250 pesos isn’t really pocket money for a lot of people.

I don’t think there is a proper way of enjoying or consuming art. There is something wrong with messing with the art, disrespecting the art by touching it and caring about it just for how pretty it is. But then I think about the many, many young people like me who came by for a few hours or half a day and they take all these pictures of the works of art and maybe themselves with the work of art. And then they go home and they post the pictures on social media with matching hashtags and their friends and family sees it. And maybe his or her parents see it and they talk about what he or she saw on the same day.

And that’s how the conversation starts. But can we not end it there?

SHAREWarning: This article might contain spoilers.  Note: This story was written before the...