Avid fans of the hit sci-fi show, Doctor Who have been patiently waiting for the reveal of the 13th Doctor ever since current Doctor, Peter Capaldi, announced his departure from the show last December. 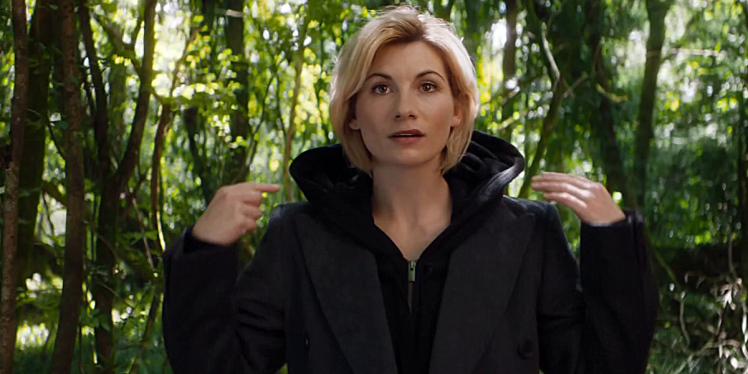 Unsuspecting fans were then rewarded when the reveal was announced on BBC One right after Roger Federer took home his eighth Wimbledon title. The short clip showed a hooded figure walking through the woods; the figure then extends a hand where a key materializes on his/her palm. The camera pans up, the hood is removed, and we come face to face with the 13th Doctor—Jodie Whittaker, who confidently walks over to her TARDIS.

Whittaker will be the first-ever woman since the show aired in 1963 to play the role of the famous time travelling Doctor in the blue box. This is a pretty big deal, so tell all your friends, your family, share this post, because history has just been made.

Jodie Whittaker, 35, is an English actress from Yorkshire who is best known for her roles on Broadchurch as Beth Latimer, The Smoke as Trish Tooley, and on an episode of Black Mirror, “Entire History of You.”

“I’m beyond excited to begin this epic journey—with Chris [Chibnall] and with every Whovian on this plant. It’s more than an honor to play the Doctor. It means remembering everyone I used to be, while stepping forward to embrace everything the Doctor stands for: hope. I can’t wait,” Whittaker says to BBC.

While she will be taking on the 13th incarnation of the Doctor, she won’t be the only one regenerating. Steven Moffat, writer and executive producer of the show for nearly a decade, will be stepping down after Peter Capaldi’s final episode on Christmas. He will be replaced by Chris Chibnall, creator of Broadchurch, who has also worked on episodes of the Doctor Who spin-off, Torchwood.

Chibnall says that he always wanted the 13th Doctor to be a woman adding that Whittaker’s audition blew them all away. “Jodie is an in-demand, funny, inspiring, super-smart force of nature and will bring loads of wit, strength, and warmth to the role,” he says, “The 13th Doctor is on her way.”

Fans have already expressed their approval and excitement for the first-ever female Doctor.

We hope that this breakthrough for Jodie Whittaker is just the first among many breakthroughs for women in the TV industry. After all, a woman can eliminate an entire race of Daleks, pull a planet out of a black hole, know which buttons to press and levers to pull to make the TARDIS fly, just as well as a man can.
“It feels completely overwhelming, as a feminist, as a woman, as an actor, as a human, as someone who wants to continually push themselves and challenge themselves, and not be boxed in by what you’re told you can’t be. It feels incredible,” she adds.

This is your time to shine, Jodie. Go kill it out there.

SHAREAre you excited for Samantha Lee’s Billie and Emma coming back to cinemas...

Going back to journaling might help our pandemic blues

SHAREThis pandemic can be traumatic for a lot of us. This disruption to...