Kian Lloyd Delos Santos had just closed shop for the night when police in plainclothes shot him dead in what they say was a legitimate police operation. According to police, Kian ran when he saw the officers approaching. He pulled out a gun and opened fire at the cops, who retaliated. Police say Kian was a drug runner. But witnesses that night say Kian was unarmed, and was beaten badly. “Tama na po! Tama na po! May test pa ako bukas!” (Stop! Stop! I still have a test tomorrow!), he was heard pleading. Security footage then saw Kian being dragged away by police to a dark lot. “Ito ang baril, iputok mo tapos tumakbo ka” (Take this gun, fire it and run), a witness overhead the police. He was then executed. Kian’s father Saldy cries that Kian was not involved in drugs. He was not on the drug watchlist. He sold candy to pay for his studies. He dreamed of becoming a cop. Kian’s mother Lorenza mentions how her son was hooked on the crime drama series ‘Narcos’. Tasked to do a school drama on the show, Kian told his classmates he didn’t want to play Pablo Escobar. He instead wanted to play agent Steve Murphy or Javier Peña—one of the good guys. At age 17, Kian’s life ends—and there is absolutely nothing we can do to bring Kian and countless others back to life. It is all too late. The streets will forever be tainted with the blood of our loved ones—and more blood will spill if we remain silent. Lorenza weeps idly next to the coffin of her son. “My voice has run out. I want to shout. I want to shout for justice for my son.” Be their voice. Photo by Ezra Acayan @ezra_acayan #everydayimpunity #humanrights #killings #drugwar #impunity #police #justiceforkian

Mellow Fellow – “my world” – Jazzie Robinson‘s my music for the weekend, but this song in particular is a real bop. Felt perfect when I was listening to this in the bus going up Marcos Highway on the way to Baguio. Good for these rainy mornings too.

“Paradise” by MNEK – I love MNEK and I’m so happy he took his upbeat, danceable sound into a darker and more sensual place. The production on this track is amazing and MNEK’s vocals sound like an absolute dream. It’s everything this R&B lover wanted. Now I can’t wait for an album release.

Patay na si Hesus – I only got to watch three movies from Pista ng Pelikulang Pilipino and I was thoroughly disappointed with the first two I saw. Patay na si Hesus on the other hand, was far from a disappointment. It was a beautiful family drama-comedy that shows that the journey itself matters more than the destination. It made me laugh and cry and feel for all the characters in the movie–even their dog, ironically named Hudas. Jaclyn Jose yet again proved her phenomenal talent as an actress in this film. If there’s one movie you cannot miss this PPP, it’s Patay na si Hesus!

Atypical – To be honest, I really started watching this one because I missed seeing Keir Gilchrist act. The last one I’ve seen him on was at It’s Kind of a Funny Story alongside Emma Roberts. But this new series from Netflix is actually a nice show to watch. It has so much innocence in it and in times like this, we really need all the lightness and innocence in life that we can get. 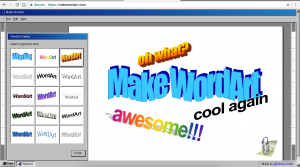 MakeWordArt.Com – Out of the blue, I tried checking the Microsoft Word on my laptop and to my horror, the WordArt “art” that I used to use before when I was in grade school were not there anymore. So I tried searching “make wordart online” and MakeWordArt.Com popped out. It’s from the same makers of the Stranger Things text generator and it takes you to an interface that’ll remind you of Windows 98. It even has the paperclip character (that i sadly forgot the name) that helps you out!!! Now don’t be surprised if you see some WordArt happening on Scoutmag.ph any time soon. Hahaha.

Fresh Cut, New Blood curated by Gary-Ross Patrana – On until September 3 at MO_Space, this exhibit curated by artist and collagist Gary-Ross is probably the coolest thing I’ve seen in a while. He basically gathered artists who work with collage: Jan Balguin, Dina Gadia, Jacob Lindo, Carina Santos, and Jel Suarez, and asked them to create seven different pieces each given a specific medium like “3. Make a collage only from two sources (maybe two magazine pages, two materials, two photographs. etc) and put them side by side.

don’t smile at me EP by Billie Eilish – You probably know L.A. indie pop artist Billie from her song “Ocean Eyes,” but what you might not know is that she’s only 15 years old. 15 years old, and she’s released this perfect eight-tracked EP. There aren’t enough crying emojis to explain how I feel about this EP, but let me say this: my favorite song is “idontwannabeyouanymore.”

Elevator to Uranus by Jeona Zoleta – If you love contemporary art and tell me you don’t know who Jeona is, then I don’t what kind of art you’ve been looking at. Ongoing at Project 20 until I’m not sure when, alongside a group exhibit curated by Jigger Cruz titled WITHDRAWAL SYNDROME, this exhibit is all you need to see this week.

SHAREWe know you’ve been saving up your holiday coin courtesy of your ninongs...