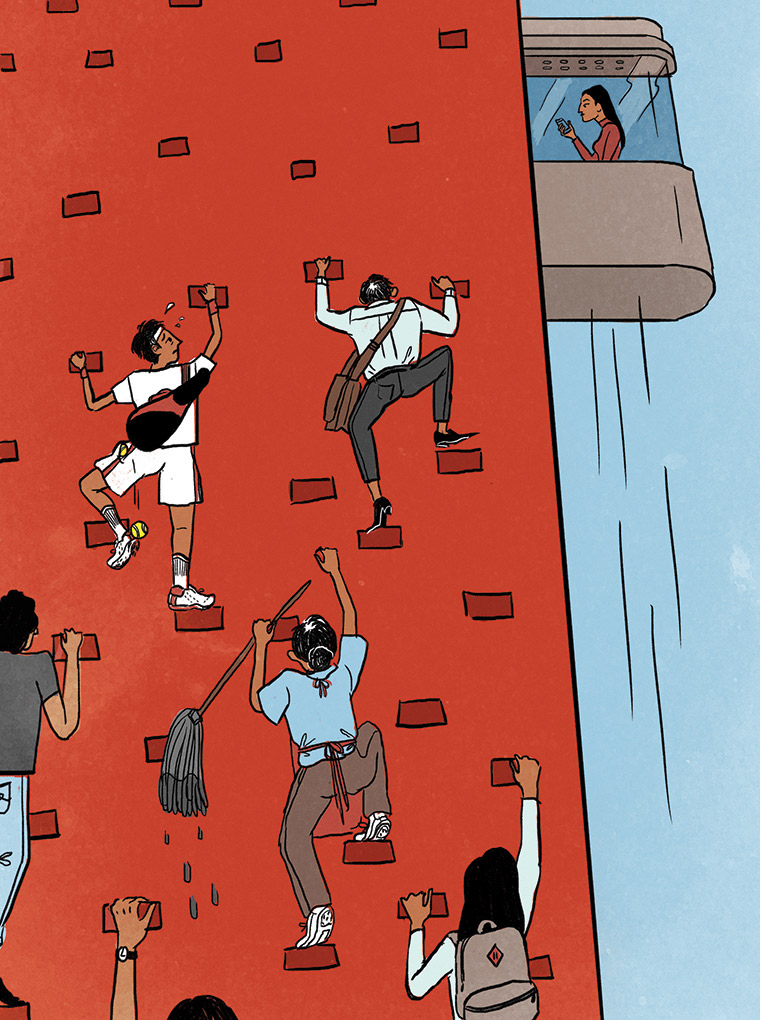 It was my mom who insisted that I try tennis. She was always of the firm opinion that, with a little bit of hard work, you could earn a living, achieve goals, and acquire skills. According to her, anything was possible when you clocked in enough hours.

I didn’t particularly want to learn tennis, or any sport for that matter. But the idea that industriousness was the route to success resounded in my tiny ears. I bought every word of it. I believed that to turn any kind of heady, farfetched dream into reality, hard work was not only crucial, but also sufficient. I thought it was all I needed. I also wanted to make my mom happy.

I didn’t particularly want to learn tennis, or any sport for that matter. But the idea that industriousness was the route to success resounded in my tiny ears. I bought every word of it.

So I did the hours, tied my ill-fitting, borrowed tennis shoes five days a week until my sessions ended and I was still missing all of my serves. On our last day, my coach patted me on the head, and, gesturing to my belly that had sunk from months of plunking around without grace on his court, said, “The exercise did you good.”

The consolation didn’t help my tiny 12-year-old ego. My crash and burn run-in with tennis after rigorous sessions of sweaty, chafed toiling had yielded no results, and I was left wondering: what gives?

I had bought into the allure of hard work for many reasons, the least of them being that mom knows best. Working hard can seem rather glamorous, especially when it’s packaged as the foolproof key to success. Just pound out the hours for everything, from learning a sport to landing a dream job, and it will all work out fine. There lies the paradox: success can be easy, just work as hard as you can.

Just pound out the hours for everything, from learning a sport to landing a dream job, and it will all work out fine. There lies the paradox: success can be easy, just work as hard as you can.

Behind all this was a sense of natural justice. Hard work bears fruit that measures up to the crucial investment. You get what you give, and balance is restored. Tennis lessons, and the swooping, heedless reality of life outside the court gave this flimsy notion a little more shape.

Those tennis classes were just the beginning of what would become a falling out with the virtue of industry. I started failing to get work published. I slept through alarm clocks and failed to make it to classes. The growing off-court expectations of my mom and many others surrounding me were left unmet despite my best efforts.

I’d always known that hard work wasn’t something to be taken lightly. So I poured in the hours, and then some. I found ways, decisively, inexplicably, to make the work hard. It seems my mind hadn’t grown much since its days on the tennis court, because I genuinely thought this was going to work.

I wanted to land jobs and create compelling stories. I wanted to be excellent, so I fought tooth and nail to get there. I suffered for it, thinking that my blind hard work was the way to earn my stripes. Late nights were spent unnecessarily grinding away on projects that could have been finished by noon. This was the one-way ticket that would entitle me to my  dreams.

Other times, I was finding myself on the confusing converse. It started with the little things: a test aced despite menial preparation, a haphazard tweet gaining some clout. There were times when success came without the least bit of effort, and it made no sense. Triumph was only supposed to come after the long hours, the blistered feet, the smoked out midnight oil.

There were times when success came without the least bit of effort, and it made no sense.

I kept running into strange luck, and it was more often on the side of others. I started to grow spiteful about other people’s lot in life. I resented the casual success of one classmate, the old money of another, and the way that they ambled on about their days without a care in the world.

The bitter cherry on top of all this confusion was Mocha Uson’s appointment as a major public official. This wasn’t by way of luck, and it certainly wasn’t a fruit of hard work. The President had spoken, and what he said was that he owed her. I was being told, rather explicitly, that a little kickback was really all I needed.

The bitter cherry on top of all this confusion was Mocha Uson’s appointment as a major public official. This wasn’t by way of luck, and it certainly wasn’t a fruit of hard work.

I had never wanted to slack off as much as I did when I found out that Mocha Uson was going to serve as Assistant Secretary to the Presidential Communications arm of our government. The situation was far from trivial, too heartbreaking to let pass. I had always felt entitled to some form of recompense for giving my all, and this was why I felt upset at seeing others succeed.

But Uson’s gratuitous entry into our government was beyond any petty resentment. Unlike that of my friends, it wasn’t a success story that simply moved at a different pace from mine. It wasn’t a story to twist in my favor. Mocha Uson’s seat in the government was an affront to the value of hard work, and to everything else that I held dear: honesty, discourse, decency. There was no way to co-opt her success for my little pity party. It showed me that, more than my own success, there are ills I’m better off concerning myself  with.

Mocha Uson’s seat in the government was an affront to the value of hard work, and to everything else that I held dear: honesty, discourse, decency.

Mocha Uson’s appointment sits right in the middle of our government’s palm—the same palm that’s out to feed its friends. Padrino remains the alarming truth of our political climate, no matter what the weather of different administrations brings. This culture of patronism is glazed with virtues that should be forthcoming. Distant cousins become colleagues as a show of loyalty. Friends become cronies for gratitude. It seems there’s room for just about every principle, except merit. What of qualifications? What of hard-earned merit? And most crucially, what of all the late nights, what of hard work?

For all the late hours, the sleep I gave up and everyone else I knew, I was owed squat. The same was true for all the other people that I began to resent. Whether or not we worked hard said little about whether or not we would learn the sport like we’d hoped.

Which raises the question: Why work hard? In these trying times more than ever, it takes more than hard work to make it. After factoring in luck, politics, and bad shoes, industriousness should still fit in the equation, but maybe not the same way I had thought, and definitely not as  neatly.

Success isn’t easy, and whoever figured that out must have been a portly 12-year-old. In such an unstable, self-patronizing playing field, hard work can seem like fool’s gold. I have to proceed with vigor because it’s the one thing I can do. Though slandering tricks remain seated in the hallowed halls of our government, my bitterness just ends up keeping them in place. It disarms me and makes me useless. It allows those in power to isolate power further.

As disillusioned as I’ve grown about the efficacy of a few hard hours of work, it remains the only thing I can do. It’s the last resort in a losing battle. There’s no changing the luck of the draw and the rotten pillars of politics.

But there’s hope yet for the systems of our country, the country I thought I was ready to give up on. I need to keep at it, or at least pick up where I left off. The tennis shoes are waiting.

This story has been published in our July-August 2017 issue and has been edited for web.