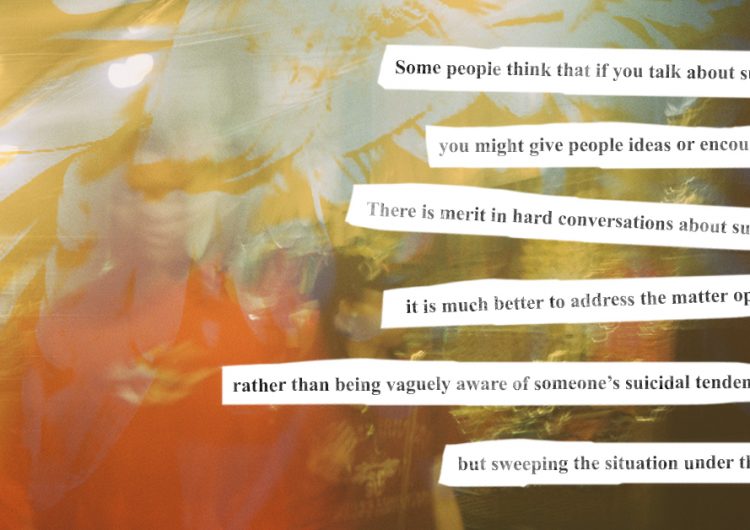 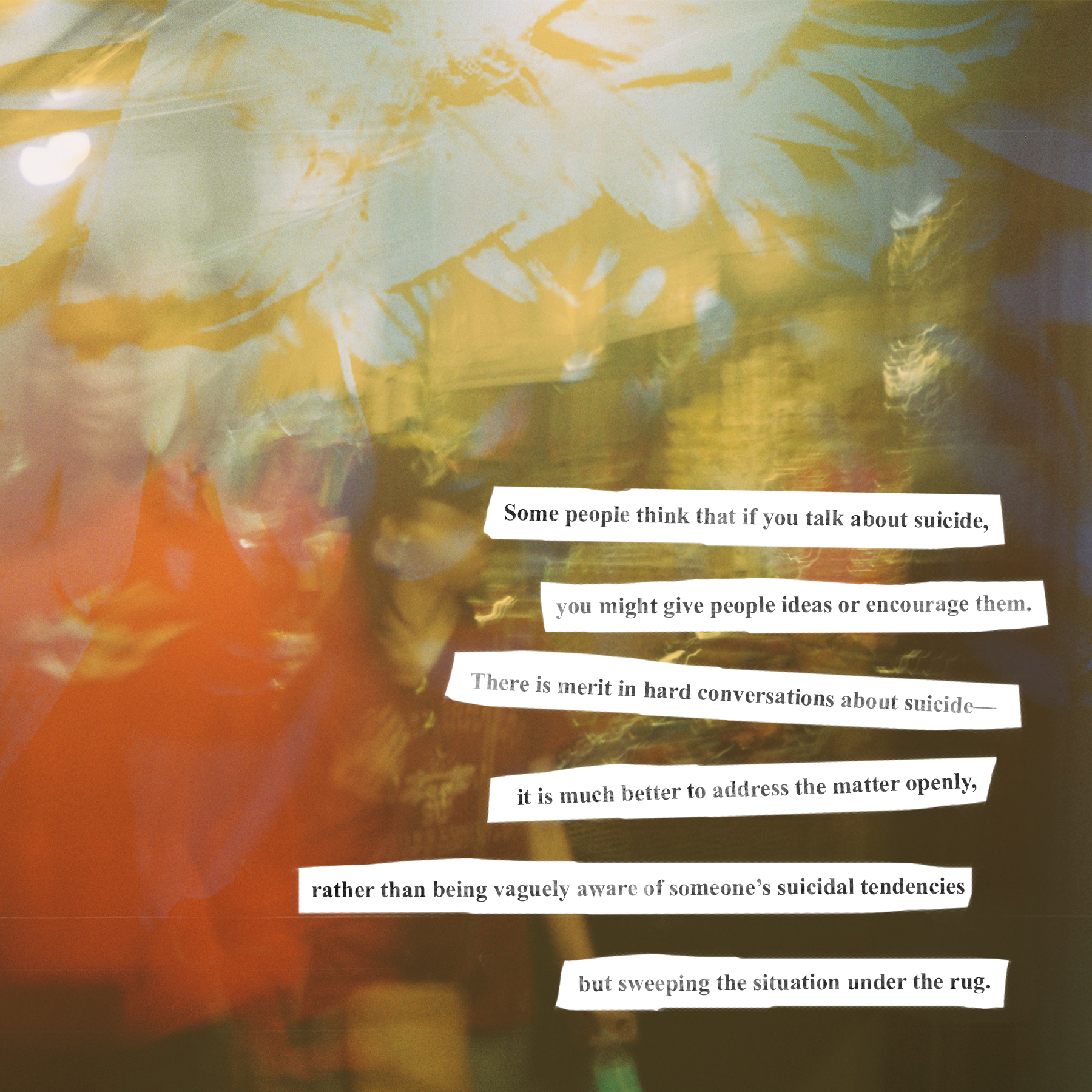 I was checking how one of my latest Scout articles was doing when I chanced upon a comment that got me thinking. The article’s point was to provide cute self-care reminders, and amidst the friends affectionately tagging each other was a snide remark: “@wow thanks I’m cured.” While I normally choose not to engage in shade from strangers, I saw their point—mental health awareness can be too gimmicky, too fluffy, and this has compelled me to approach this mental health article a little differently.

This Suicide Prevention week, we need to have a no frills, honest talk on suicide, and I hope that this inspires people to engage in discourse. This is coming from a standpoint of someone who is both (a) an active mental health advocate, working on becoming a mental health professional someday, and (b) a person with mental health needs, who experiences suicidal urges and ideation as a result of depression and anxiety.

Suicide is such a sensitive and controversial topic. Do we still need to talk about it?

I’ve heard that in order to reduce stigma, we need to show the mental health success stories only—the stories of resilience in which we overcome suicidal ideation and ultimately become better people.

But what of the reports of suicide or suicide attempts that make us feel so powerless? What of the daily struggles that people go through, unsung tragedies in their own right? What of the stigma that surrounds suicide, manifesting itself in cancerous comment sections and unsolicited remarks from judgmental “friends,” relatives and coworkers?

Some people think that if you talk about suicide, you might give people ideas or encourage them. There is merit in hard conversations about suicide—it is much better to address the matter openly, rather than being vaguely aware of someone’s suicidal tendencies but sweeping the situation under the rug.

[pull_quote]There is merit in hard conversations about suicide—it is much better to address the matter openly, rather than being vaguely aware of someone’s suicidal tendencies but sweeping the situation under the rug.[/pull_quote]

There are cases in which we really shouldn’t engage the topic of suicide, such as when people politicize it (e.g. “This person committed suicide because we need [insert political agenda here]!”), or when an abusive person waves suicide as a threat or power tactic in a relationship. In those cases, be mindful of the difference between agendas and avoid. Be the better person.

How do we even begin to navigate such a tricky topic?

Suicide is a highly sensitive, context-dependent matter to talk about—I can’t offer advice applicable to everyone, but there is a world of difference when talking about it academically, as part of the media, or to someone who may be considering it as an option.

Words carry so much weight—you need come from a place of empathy, non-judgment, and objectivity, so choose them carefully. Beyondblue.org recommends that we stop using stigmatizing terms like “committed suicide,” “successful suicide,” “failed attempt at suicide” and opt for “died by suicide,” “ended their life” and “attempt to end their life.”

Tact is essential: for instance, it’s tasteless to talk about the details of a suicide, especially with someone still affected by it. Again, watch what you say–assumptions that underpin your statements may do so much more harm than good, however well-meaning you may be (e.g. Value judgments: “that’s wrong”; Making it about religion: “Aren’t you afraid of being condemned?”).

What do we do about suicide jokes?

Over the years, I’ve heard so many offhand comments that pertain to suicide, often played off as “jokes,” but mostly directed to oneself: Pakamatay na, f*** my life, I want 2 die, kill me now, end me. There’s also been a rise in popularity of depression-related memes like me_irl (self-deprecating) and even 2meirl4meirl (me_irl on steroids, which means self-deprecating to the point of suicidal ideation).

The context is now lost to me, but at some point in senior high school, a teacher of ours told us that when you joke about killing yourself, it means that a part of you really wants to do it. I noticed an increased usage of “I want to die” “kill me now” right after that lecture—or at least, that’s when I noticed how often my classmates said it.

To say that everyone who jokes about suicide is suicidal is a bit of an overestimation, but I think that that teacher was trying to say it’s much better to have a false positive than leave the topic unaddressed—especially if you hear someone joke about it repeatedly, or play it off as a “half jk.” We joke in order to make light of situations, and it’s entirely possible that a suicidal person may be trying to see the humor in a situation where there would otherwise be none.

Suicide is no laughing matter, and it may help to give even the most flippant remarks some attention. Even just a simple “rooting for you” or “seriously though, I’m here for you ah” might help validate otherwise hidden cries for help, or even make someone’s day.

I like my life and don’t see the appeal of suicide. Why do people want to commit suicide anyway?

Speaking from a personal standpoint, there are times when you stop seeing the point in your endeavors, goals and even your entire life. Suicidality often comes from stressors and emotional turmoil—just like physical pain, it takes a toll on you, and the default reaction is to just. Want. To. Make. It. Stop. The fact that it’s in your mind doesn’t make it any less real, because it affects the way you perceive the world.

I figure I’m far from alone in feeling this—I’ve lurked several online support groups and empathized with many posts. There’s a common theme of people who feel isolated or stuck in their respective situations, with not so great support systems that don’t acknowledge there’s a problem to begin with—they’re “too sensitive,” they should “lighten up,” they’re “just self-harming again, how predictable.”

I am suicidal and I don’t know what to do.

Thank you for holding on until today, and for recognizing that it’s a problem rather than a solution. Please, please contact a mental health professional so you can set up an emergency appointment, or try to call a crisis line (although I’ve been hearing mixed opinions and reviews for the latter). We have a constantly updated list here on Silakbo PH.

Even if you don’t have any/much prior knowledge on mental healthcare, educating yourself can help you assume a more objective stance on what you’re thinking and feeling—you’ll be able to know which thoughts are just lies peddled to you by, say, the depression or the anxiety. You’ll also be able to know which healthier coping mechanisms work best for you.

A good support system is also key! You also need to tell trusted people, so that you have people to be accountable to. The mere presence of certain people in my life have kept the demons at bay for me.

This sounds cliché as hell, but a little introspection might help you find your “whys” again. Apart from my background and good support system, I hold on because I refuse to let my mental health advocacy story end on a sad note. I still have plans to become a professional and help those who go through the same thing.

I’m not a mental health professional. How do I stage an intervention when someone I know is suicidal?

I am by no means a mental health professional at this point, but the thing is, very few people who are forced to deal with suicide have training in mental health interventions or even psychology.

If someone you know is starting to worry you with suicidal symptoms, you’re already on the right track for just being there and letting them know you’re worried in the first place. Validate what they feel as real, and do as little harm as possible when talking to them. Again, tact and empathy are key.

Gently direct them towards mental healthcare resources, read up on their condition(s) if they’re diagnosed, or what they could possibly be going through. It’s important not to diagnose them yourself, though—you can leave that up to the professionals.

Generally, just be a good support system to them. As many Suicide Prevention events as there are this month, mental healthcare and education start with the immediate social network and environment. Isolation, unsupportiveness and inadequate access to mental health resources are insidious and can be disastrous.

But if someone outright tells you they are going to kill themselves, don’t pull any stops—call them, the people close to them, or the organization/institution/company they belong to. Go to wherever they are. Do what you can to stop them. Don’t treat this sort of warning as a “joke” or “false alarm.”

Buying from Save San Roque’s “Zinebang Gabi” doesn’t only support your local fave...