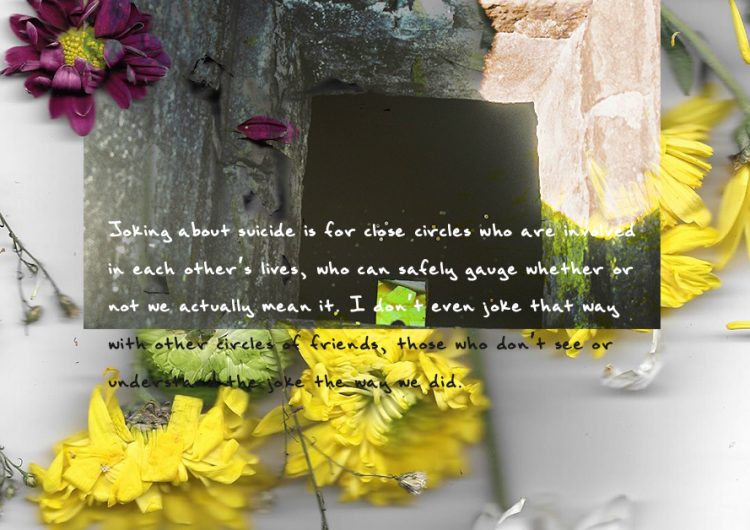 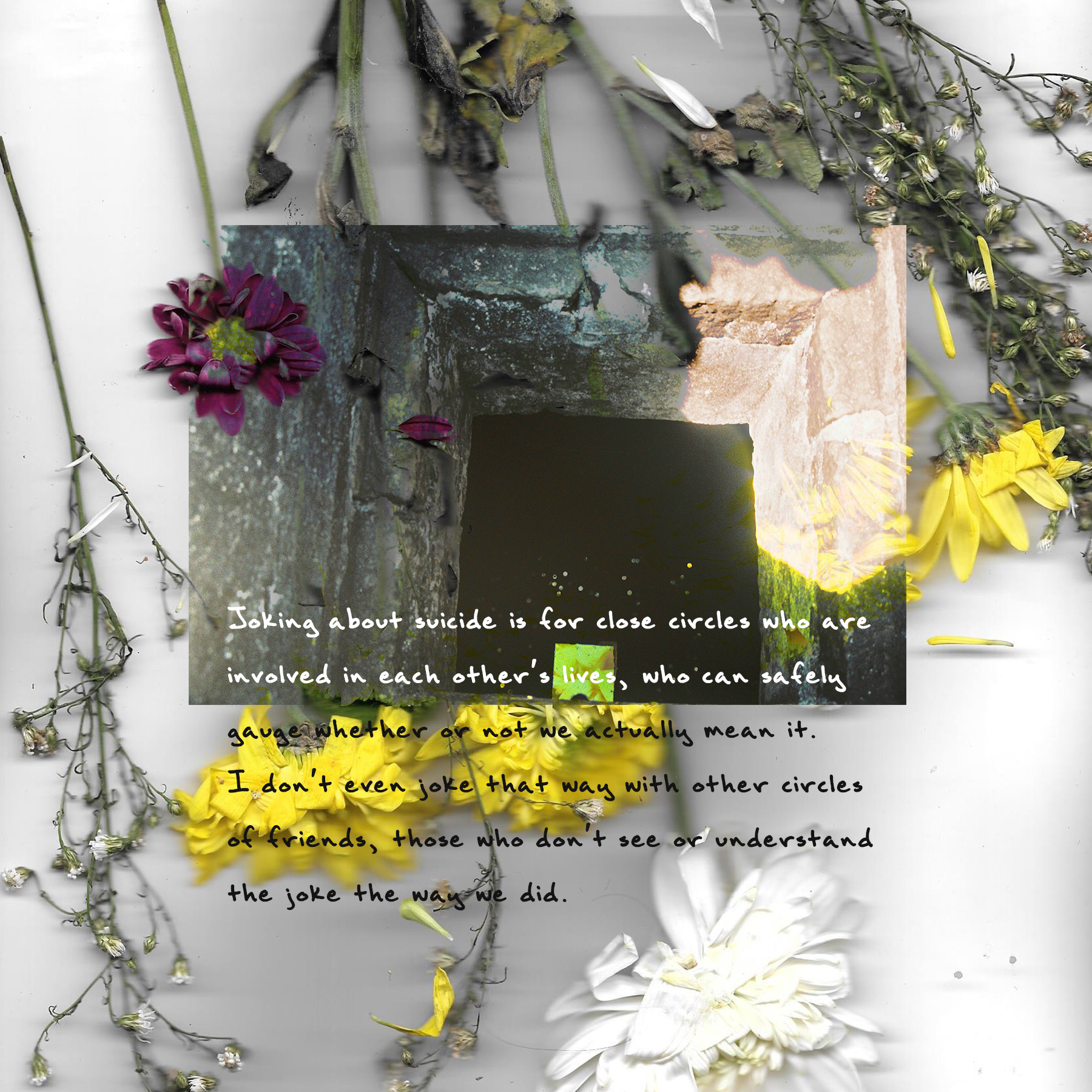 “Can I die now?” my officemate sighs, after finishing one batch of work. “Don’t,” I tell her sternly. “Don’t you dare do it without me. We made a pact.”

My friends and I joke about suicide, but we don’t actually mean it. Not really.

On a scale of one to ten, ten being “I’m actually going to kill myself tonight,” we’re a five. There’s a yearning to die, but not to purposefully do it. If a bus hit us this afternoon, it wouldn’t be so bad. It’s a terrible inside joke, but we do it because we share the perspective of the appeal.

The appeal is an escape from the pains and burdens of our stress and, for some of us, our depression. Being bipolar-depressed, suicidal thoughts pay me regular visits like relatives or long-distance friends. I’ve learned to ignore them, or to call for help when they get too invasive and tempting.

The farthest I’d gone was to take too many prescription pills; not of a craving to die, but to taunt death the way it was taunting me. Just in case something bad would happen, I left my boyfriend a message of what I had done. He did the right thing by assuming the threat was real and immediately calling my sister.

Joking about suicide is for close circles who are involved in each other’s lives, who can safely gauge whether or not we actually mean it. I don’t even joke that way with other circles of friends, those who don’t see or understand the joke the way we did.

When I jest about it at work, at a job they know I love, they’ll only incite the inside joke about our pact. Had I said it two weeks earlier, while launching the most stressful event of my life, they would have taken me aside and maybe called my doctor. Especially since my overdose episode had just happened the previous week. We don’t even dare make jokes about that because we knew that one was serious.

I accidentally kidded with an acquaintance and fellow mental health advocate, “The work is done. I can die now.” She immediately yelled, “No!”

We had another colleague with clinical depression once. He would make the same joke but we knew he meant it just a little more than we did. Unlike us, he just didn’t want to open up about what really hurt. We knew he was coping through humor in a way that we didn’t need to because we opened up to each other.

We tolerated his jokes by saying, “same,” just to not alienate his feelings, but we continued to assess his situation and make a back-up plan just in case things got real. We tried to end each joking session on a serious note by talking about our actual emotional state. Both to measure the context, and to temper the suicidal thoughts we knew he was truly experiencing.

If a stranger makes a suicidal comment, assume it’s real. If they make a suicidal joke, ask them if they mean it.

No matter how we soften the blow by expressing it differently, like “us2 q n mmtay haha,” suicide jokes by suicidal people are often coming from a truly dark place. And suicidal jokes by people who aren’t suicidal normalize the thought for those of us who are.

Even a darker, more serious portrayal like in 13 Reasons Why caused so much damage by giving people with depression “someone relatable” and therefore encouraging alarming rates of suicide. How much more could a joke do?

I have depression, but I also have a solid support system. I can only imagine how, without them, suicide jokes from strangers would be “comforting” because there would be this false idea of “I’m not the only one thinking about killing themselves, and if I pushed through with it, I wouldn’t be the only one to do it.” The thought of someone out there feeling this way hurts me.

If a stranger makes a suicidal comment, assume it’s real. If they make a suicidal joke, ask them if they mean it. If they do, get them help; if they don’t, ask them not to joke about it. We can normalize the discussion of suicide without normalizing its appeal—through humor or otherwise.