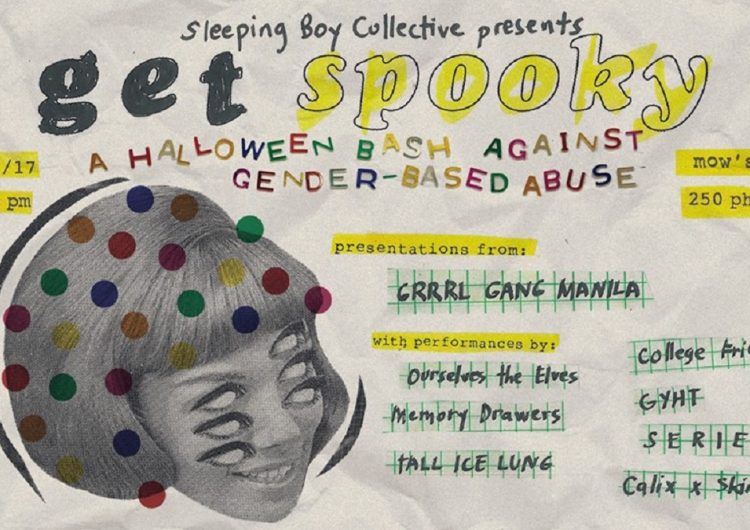 Halloween is still seven days away, but if there’s one thing we know for sure it’s never too early to get started with the spooky festivities. From gigs, to art and drag shows, we’re listing down 13 of our picks for Halloween parties to go to this year starting today. Now, all you’ve got to do is get your costumes ready.

If dressing in drag is you’re thing then head on down to Nectar Nightclub from 10pm onwards for a Halloween-themed Drag Cartel, where they will crown October’s kween. The theme is aswang or ghost so come in your ghostliest outfit.

College kids hangout spot bar Walrus is throwing their own Halloween party from 6pm-10pm, where they will be serving drink-all-you-can Strawberry Fields, Cuckookachoo, and Rum Coke for P300 while playing sweet tunes by The Beat Project Manila. Rules: No costume, no entry.

30 plus DJs including LUSTBASS, LikeAnimals, and The Diegos are all heading down to the three stages of bar slash club XX XX, from 9pm onwards for their special Halloween party. Come dressed in your scariest outfit.

From 8pm onwards bar and mini-gallery Today x Future is throwing their annual Halloween party with DJs like Samantha Nicole, A.I. Hoseki, and Major Chi. This year’s theme is “Art,” so come in as an artist, an artwork, or an art-inspired costume.

Happening at 19east from 5pm onwards, this P300 music fest features Autotelic, Ben&Ben, Run Dorothy, IV OF SPADES, Carousel Casualties, Sud, and more requires you to come in costume (including the bands). Come before 7pm for P200 entrance.

As its event name suggests, this Halloween party at Z Hostel from 8pm onwards is a Game of Thones-themed party. Come as characters like Arya Stark, Jon Snow, Ygritte, or maybe get creative and come as a GoT dish?

The Curator, Taco Vengo!, Boiler Room, Damiana, and Belle & Dragon are all coming together for this strictly villains only halloween party held at Belle & Dragon from 7pm onwards. FYI: No heroes allowed.

Get Spooky: A Halloween Bash Against Gender-Based Abuse

The Sleeping Boy Collective x Grrrl Gang Manila is scaring away sexual predators at this Halloween benefit bash against gender-based abuse at Mow’s from 8pm onwards for P250. Come in your fiercest costume and catch speakers and bands.

Looking for a witch friendly party? Head on down to Dulo for this ‘80s club kid, dark wave, and East Berlin-inspired Halloween party from 9pm onwards. Bringing in artists like Jellyfish Kisses, Multiverse, and Manila Animal, it’s surely to be an electrifying night.

SHAREJust a couple of days after a controversial oath-taking, the Duterte Youth is...

Scorpio season, we’re ready for you