It’s really, really hard to miss the boys of IV OF SPADES the moment they enter a room. Clad in color-coordinated, ’70s-inspired outfits (bandanas, round sunglasses, turtlenecks, checkered blazers—you know, the works), Zild Benitez, Badjao de Castro, Blaster Silonga, and Unique Salonga all look like they exited a time machine from four decades ago and found themselves right smack in the middle of the 2010s. Unsurprisingly, their funky, falsetto-filled songs match their entire getup. A week after releasing their chart-topping track Hey Barbara, IV OF SPADES dropped by our office building for an Inq!Pop session livestreamed online.

“I love the new song,” I immediately tell bassist Zild after their set. He smiles with gratitude and points to the rest of the members.

“Thanks, our lolas love it too,” he answers, laughing. “We’re lolo and lola-approved!”

Once you place a vintage-influenced band into the modern era, there’s no denying that grandparents, titos, and titas everywhere are bound to fall in love with them. But do the kids love these guys just as much?

In an era where both millennials and Gen Z-ers obsess over vinyl, analog photography, old cartoons, and retro aesthetics, IV OF SPADES couldn’t have entered the game at a better time. Playing at this year’s Scout Music Fest, the band emerged as the crowd’s surprise favorite performer, impressing both audiences and veteran musicians alike. Though some may easily dismiss them as an eccentric and manufactured pop band, the inevitable rise of IV OF SPADES is here and they’ve only just gotten started. 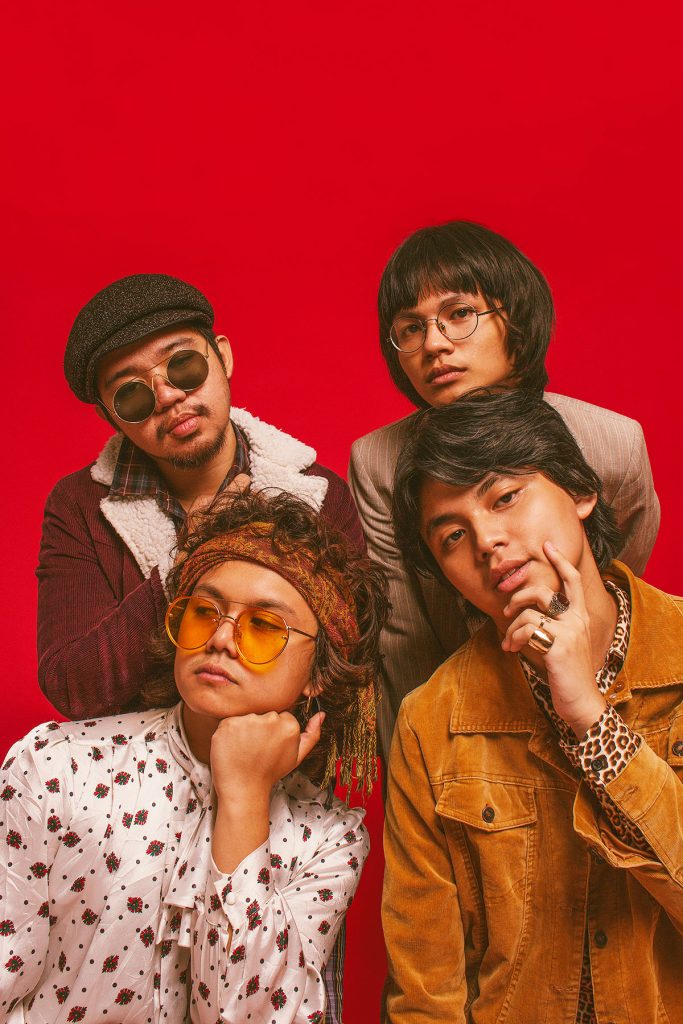 Like most struggling bands in the local music industry, the four-piece group was far from kicking off with a bang. IV OF SPADES formed in 2014 when their manager, Allan Silonga, was on a search for band members who could collaborate with his son Blaster, who would become the quartet’s lead guitarist. A musician himself who knew many people in the scene, Allan eventually tapped his friends’ sons who were around Blaster’s age—Zild (bass) and Badjao (drums)—to join the group. Unique came in as lead vocalist and rhythm guitarist not so long after the members remembered that he was already writing his own music.

IV OF SPADES’ first major shot at breaking out into the scene as a band was at Wanderband in 2015. They played their first-ever released song Ilaw Sa Daan, only to be beat out by Oh, Flamingo! to perform in the following year’s Wanderland Music and Arts Festival. This forced the band into a slump for a brief period. Zild says, “After Wanderband, we kind of stopped, because it was really sad for us, with vulnerable hearts, trying to pursue music. For six months, we weren’t writing our own songs. When we played at Scout Music Fest, we were just really surprised that people actually liked who we are while we were being ourselves. It was like, wow, people actually like us now?”

In between, Zild and Blaster joined Eat Bulaga’s Music Hero, an eight month-long televised competition among musicians with talent for various instruments. Both competed using their bass and electric guitar respectively, with Blaster eventually coming out as winner and taking home the P500,000 prize—which would help fund the band’s future productions. Zild then figured that they couldn’t stay dormant and directionless forever and shared his ideas for rebranding IV OF SPADES. 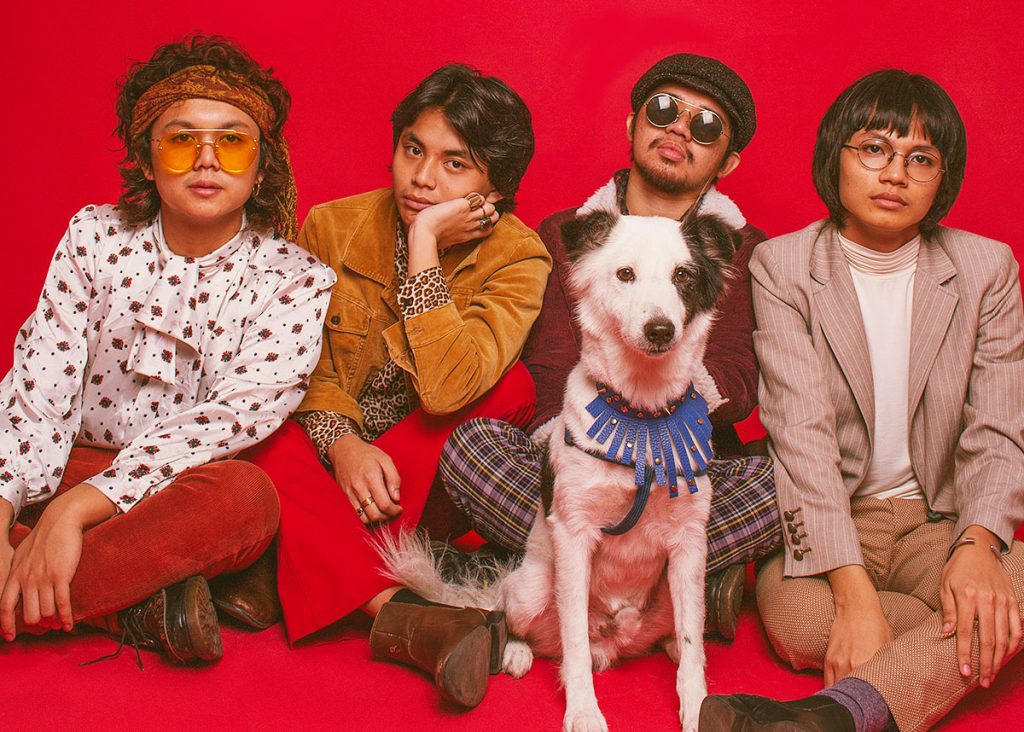 When Hey Barbara was released, accompanied by a bright and visually striking music video, it paved way for the band to gain more and more traction online. Music-wise, their funk and disco tracks are easy to dance to, thanks to upbeat melodies and contagiously catchy bass and guitar riffs—though the band claims that it wasn’t their initial intention to sonically mirror the ’70s.

Outside of their music, what makes IV OF SPADES quite literally stand out from other bands is their commitment to style and branding, as well as each member’s meticulous attention to detail. You’re probably never going to watch a gig of theirs where they aren’t all dressed in a similar fashion. In the age of Instagram and YouTube, music is turning out to be not just a listening experience, but a visual one as well. “We’re not just doing music, we’re also making art. And we’re trying to communicate to people through art. So we want to visualize what they’re hearing. This is what we look like. The way we play our music—this is how you should portray it in your mind. We’re just dictating what we want them to see and feel. And we’re really just experimenting along the way. We’re definitely taking it seriously, but at the same time, we’re being natural about it. Maybe after two years we’d be a different type of band,” elaborates Zild. 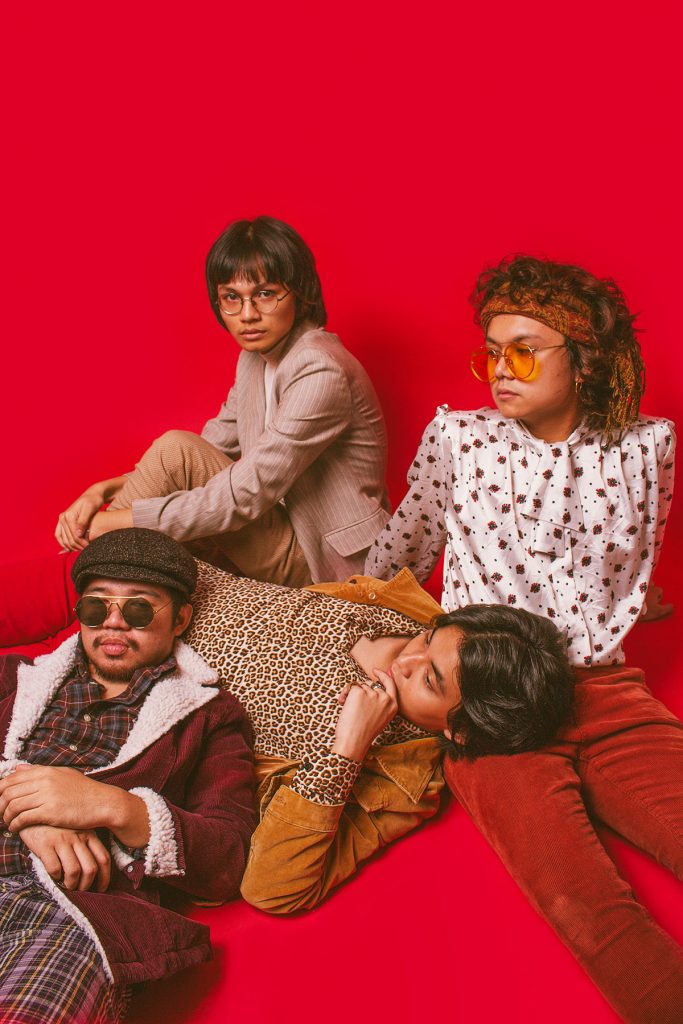 For a group that clashed and underwent an identity crisis in the beginning (they even changed their band name to Ecclesia for approximately two weeks), chemistry and songwriting come easy to IV OF SPADES, with various roles shared among members.

“Unique would be the baby. Badjao solves things because I have a lot of ideas scattering everywhere, so he’s always trying to organize our thoughts. He’s the one who goes like, ‘Okay, let’s be realistic…’ I’m the impulsive person who keeps on trying new things and ideas—the perfectionist! Sometimes, that’d be the root of some tension in the studio. But [Unique] is the most committed one! He’d just write the songs and be on time always. Blaster is…” Zild trails off and sighs.

“A funny guy,” Unique chimes in as he chuckles.

Zild tries to compose himself in between laughs. “[Blaster] is the apple among the oranges. He’s a different guy! His humor is just out of this world. He’s not from the earth. I mean, he knits and alters his own clothes sometimes. He’s our hairstylist, too. He’s from another world, I’m telling you!”

It’s moments of laughter like this that remind people that despite IV OF SPADES being a Warner Music-signed band prepping for an album release in the first half of 2018, they’re still a bunch of kids who, with no better way to put it, just genuinely love the art of performing and making music.

“We’re not just doing music, we’re also making art. And we’re trying to communicate to people through art. So we want to visualize what they’re hearing. This is what we look like. The way we play our music—this is how you should portray it in your mind. We’re just dictating what we want them to see and feel. And we’re really just experimenting along the way. We’re definitely taking it seriously, but at the same time, we’re being natural about it. Maybe after two years we’d be a different type of band.”

“You know, we used to be called Chop Suey,” says Zild. “Imagine 14- and 15-year-olds trying to be cool, trying to be rockstars! Then we realized, you know what? This is not us! And here we are now—the dorky band IV OF SPADES!”

Nearing the end of the interview, I’m down to my last question with Unique and Zild, while Blaster and Badjao are still stuck in Quezon City rush-hour traffic. Future plans? I ask.

“Ano? Future plan ng IV OF SPADES?” Blaster’s voice replies with earnest confusion. The room bursts into more laughter when he responds like a high school student being asked a math question on the spot. “Paanong future plan?”

“That’s a little blurry for now, but I believe in this guy if he says it!” adds Zild. “I guess we want to represent Manila and show that we have quality music. There’s a sense of culture in the Philippines that the world should hear. That’s our goal.”

At their gig at Social House before the photo shoot, members of veteran band Cheats compliment IV OF SPADES on their music and knack for performing. By the time they’re back at the office and in front of the camera (with styling by themselves, of course, with some help from Blaster), each member poses so naturally you’d think these 17- to 20-year-olds had been doing this all their lives. Perhaps Zild’s—or who knows, maybe even Blaster’s—vision for IV OF SPADES isn’t so impossible after all.

SHAREWe described boomers before through one meme: old man yells at cloud from...

Ultimately, this SC decision sets this precedent to honor just about anyone we...