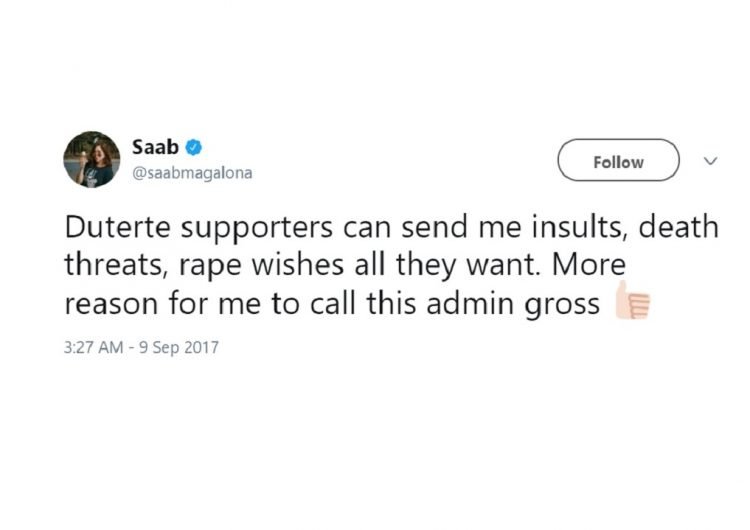 Cheats singer and daughter of the late legendary rapper Francis Magalona, Saab Magalona has always been vocal about her disdain towards the current administration run by President Rodrigo Duterte. Taking to her Twitter @saabmagalona to voice out her concerns about the extant war on drugs, a tweet she made last week criticizing the misleading statement of Philippine National Police Director Chief Ronald “Bato” Dela Rosa has sparked a Twitter war.

Her tweet above was what began it all. In her tweet, she calls out Bato for his puzzling statement: “Walang sinabi si Presidente sa akin na pumatay kayo nang pumatay” (The President has never ordered me to kill), despite previous headlines in multiple media sites stating that he was ordered to kill any opposing suspects. In reaction to this tweet, Duterte supporters were quick to refute, saying that Duterte may have been misquoted by media itself. Thus sparking a heated online debate between Duterte supporters and Saab, in which Saab ended up calling out the whole thing “kadiri.”

I mean, shall we ignore the other headlines?! Lahat nalang joke. Kadiri

Since then, netizens have gone on to chip in with their own two cents on the matter.

@makoy91 oh darling, his spoken words might be quoted wrongly by wicked media.?

Have you been living under a rock? These statements were captured on video and broadcast on primetime news. Symbolism na naman? Misquoted? pic.twitter.com/gQ1WCVawbD

Now, eight days after the tweet in question, Saab still stands by her original tweet. Unfazed by the “insults, death threats, rape wishes,” she once again tweets that she finds the current admin “gross.”

Duterte supporters can send me insults, death threats, rape wishes all they want. More reason for me to call this admin gross ??

Good on you Saab! We urge other social media influencers to stand their ground and continue to voice out their opinions.

For this year’s Halloween, it would be just me, my laptop, and these...

SHAREHulyen has mastered the art of happy sad in her art. In a...