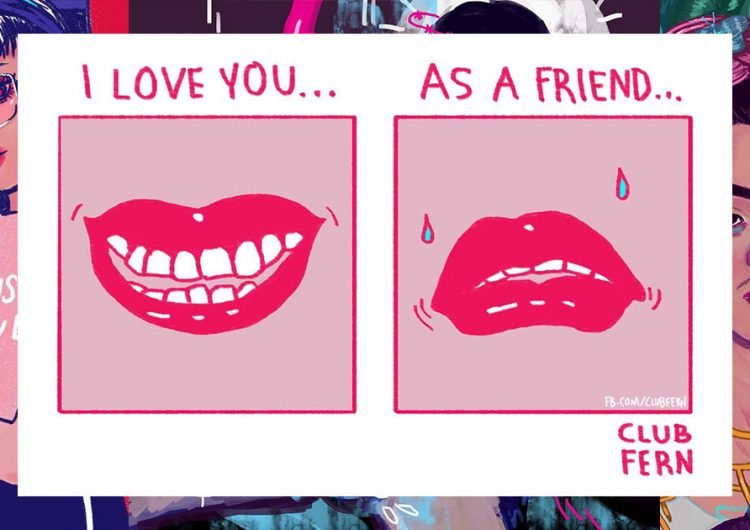 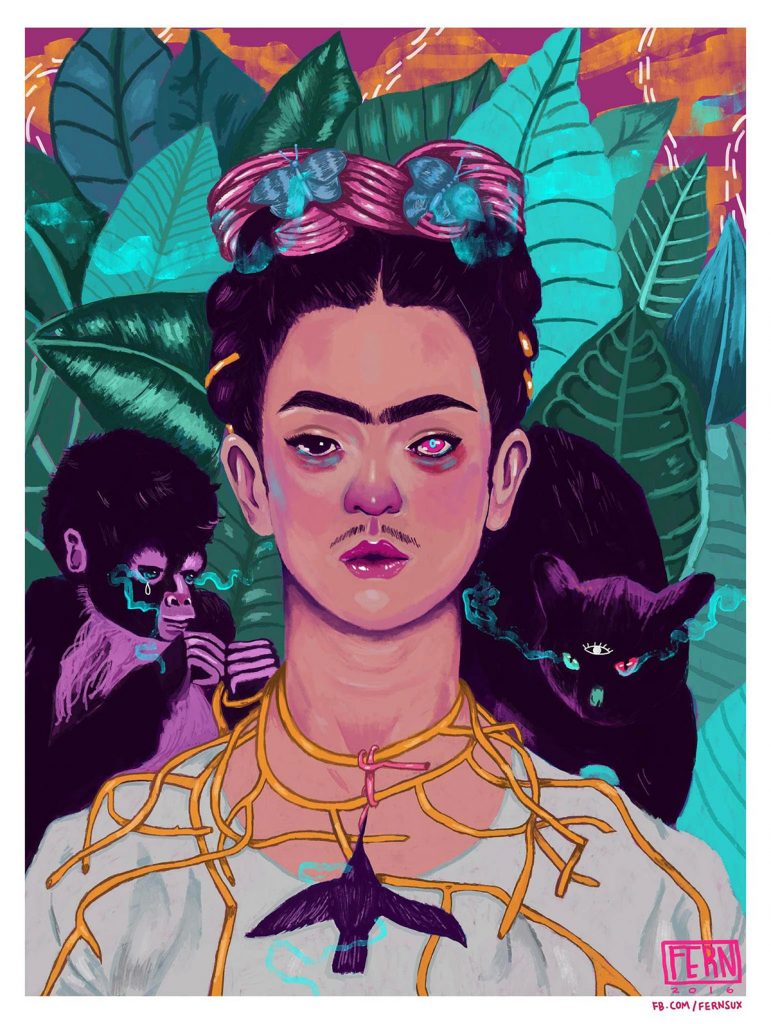 Meeting an internet personality in real life can be a very strange experience. Part of us might feel like we’ve come to know the photographers, artists, and bloggers we follow on social media. We get a peek into their day-to-days through Snapchat and Instagram Stories. We get to hear them rant or rave about both the biggest and smallest things through Twitter.

It’s even more surreal to actually show up at their door and spend a day with them. All of a sudden, you’re about to come face to face with the real deal, and you wonder if they’ll turn out to be different from what you thought they’d be. Today, I find myself at a house with Fern, also known as CLUB FERN, artist and prominent internet personality.

Fern made her way to internet stardom via her comics, which she started posting on a dedicated Facebook page just a year ago in 2016. Her work has a distinctive palette that primarily features deep shades of purple, magenta, and cyan. If you’re scrolling through your feed, it’s pretty easy to stop to take a look at her work if you come across it, simply by virtue of how strong the colors come across. It isn’t even just that the colors simply pop out of their frames. The play of cool and warm shades also feels inviting and strangely familiar. 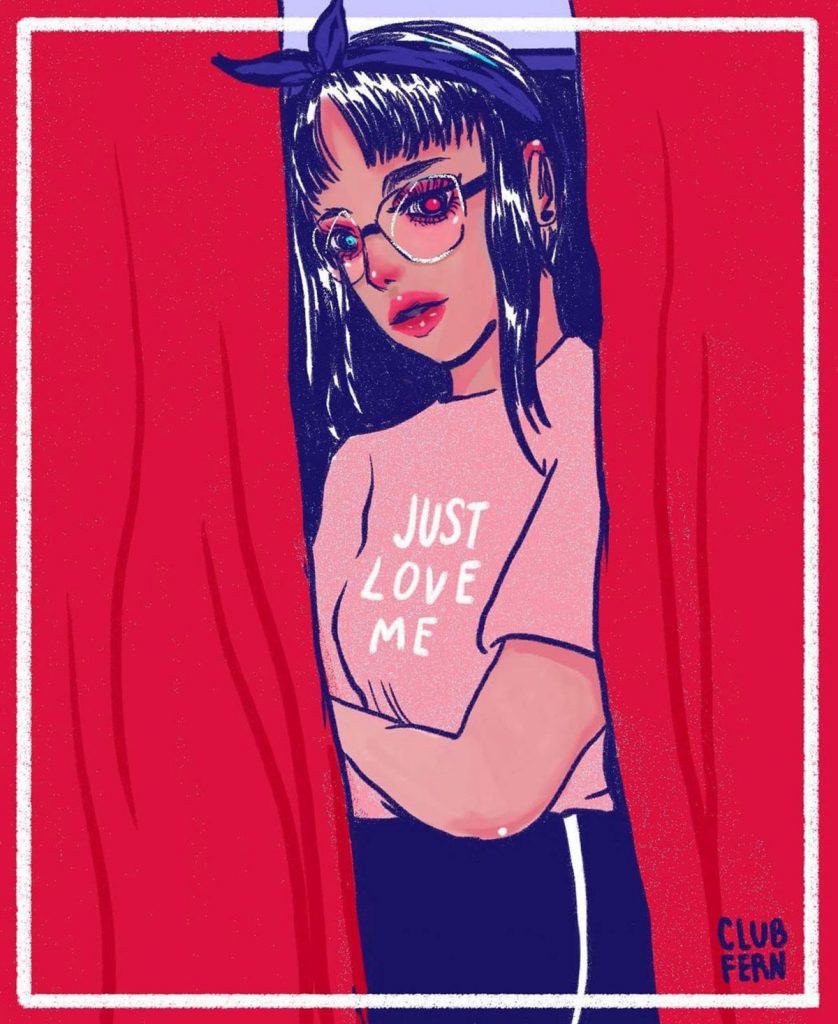 Her comics come in the form of quick and visceral doodles that are as immediate as the topics they touch upon, namely the things that people of our generation feel, experience, and joke about, with a few pinches of pop culture references here and there. Fern’s pieces range from a redo of the Morton Salt girl with the words “Stop being so salty,” plastered on the side to a girl telling her friend she won’t leave an unhappy relationship because she doesn’t want to die alone. Sometimes they are as simple as single images put beside such taglines as “Stressed backwards is desserts,” “Destroy mean boys,” and “I belong deeply to myself.” She presents them through lenses of both laugh-out-loud, self-deprecating humor and unabashed, vulnerable sincerity.

Fern is as colorful in real life as she is on the internet and the usual means by which she interacts with the rest of the world (text, IM, or video chat). One of Fern’s half-joke, half-serious goals was to be the first hit in a Google search of the word “Fern.” As of time of writing, the first results are still photos of greenery. But changing her branding from just Fern to CLUB FERN helped with that. And so searching CLUB FERN puts Fern’s Kingdom Plantae page up top and photos of actual ferns down to the fourth result. “I really like the plant, plus it stems from my actual last name. Think of it as a shortcut. If I told you my last name, I wouldn’t sound cool anymore.” 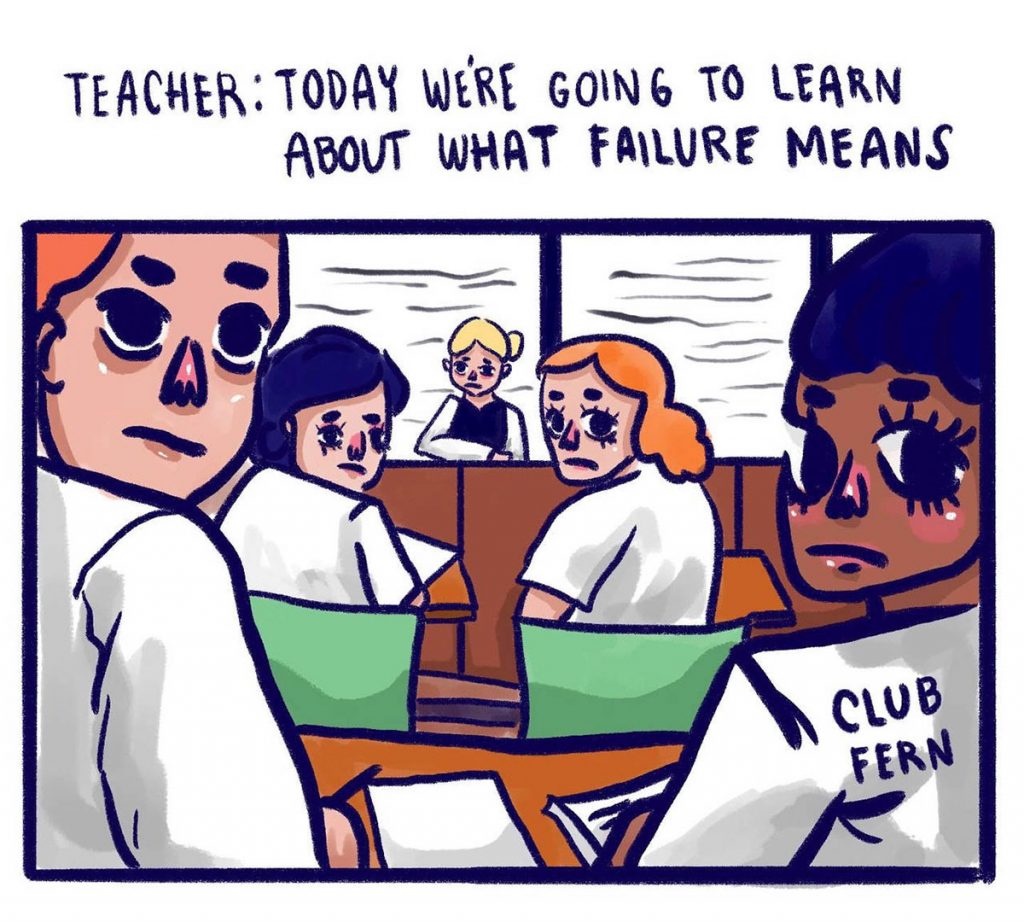 Like a lot of artists, Fern started drawing as a kid, citing a Japanese show she saw on Animax as inspiration. Later on, her sphere of influence would expand to include something pretty central these days. “I think a big inspiration to my art is basically shit I see on the internet,” she says. “Memes and anything with neon bright colors make me want to get up and doodle. I’m also very into Renaissance and pop. The way portraits are done makes me feel so nice and I like mixing these two together. Klimt, Van Gogh, Kawasaki, and Jean are big influences to me. I love pop music, too.”

The internet was easily the third participant in our conversation, as we’d often go to it to show each other photos, videos, and extra information. And the internet is the very ground that Fern founded her Kingdom Plantae empire of a Facebook page on. “I practically live in it. Basically, one morning I asked my boyfriend if I should put my art on my page, and he encouraged me to do that. I was scared because I was afraid I wasn’t going to get anywhere. I never realized I would reach so many people.” “So many people” means a whopping 81,215 likes, with anywhere between 500 to 13,000 reactions per post. 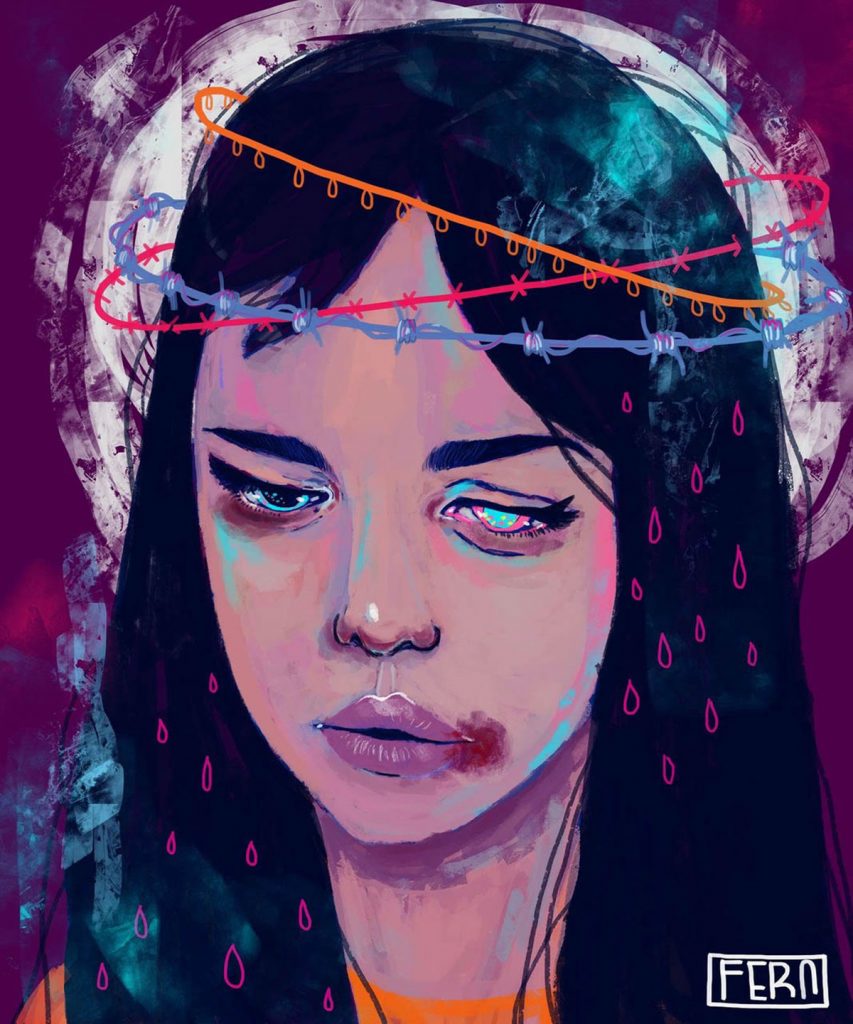 The numbers make a lot of sense—Fern’s art is deeply relatable. She puts out drawings and comics that talk about what it’s like to live and feel in this day and age. Her work sheds light on the kind of multi-layered emotional overtones and undertones that fill the lines between the text messages we send and other everyday matters. Whether it be about something as light as trying to get a free frap from your favorite coffee shop, to feeling pathetic over being constantly seenzoned by a crush, or coping with the pain of emotional abuse, she gets it, and you can see it in her art, regardless of where you are in the world.

And a good chunk of her fan base—her work has inspired fan art, letters, and even makeup looks—is actually halfway across the globe. “Whenever I write something in Filipino on my page, people get surprised and ask me if I’m from here. Second to the US, [my fans] are scattered all around the world. I think that’s amazing.”

That’s a lot of love from those who relate to her work—work that can get vulnerable. And vulnerable work tends to get quiet responses from an audience who feels the very emotions that they see in a painting. Putting up art that talks about matters people prefer to deal with in private takes some guts.

Despite differences in culture and custom, language barriers, and international barriers, Fern’s reach is easily a testament to just how much people around the world still have in common, whether it’s a rehash of the latest meme, the joy one feels over little things, or even something as ancient as love.

As grateful she is for how far the internet has brought her, one thing she still hopes for is to be known here in her home country. “I love the art scene here. I love the artists here. I used to be an assistant to Romeo Lee a few years ago. I also love Yeo Kaa and her work! I’m hoping to expand my art here soon.” 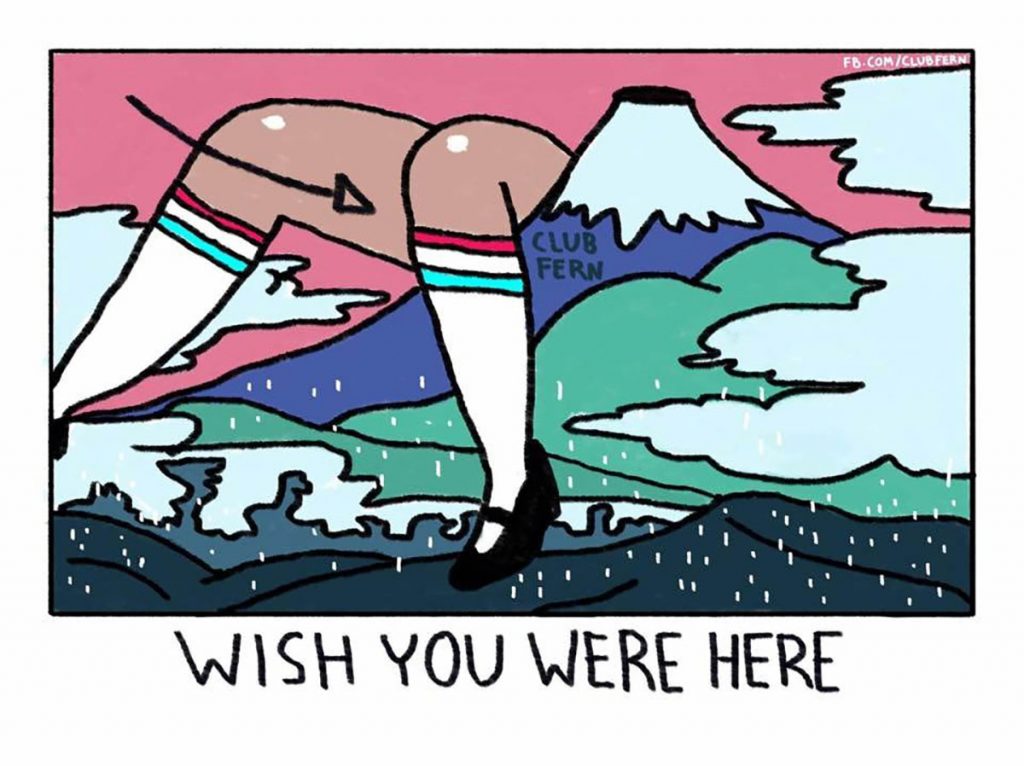 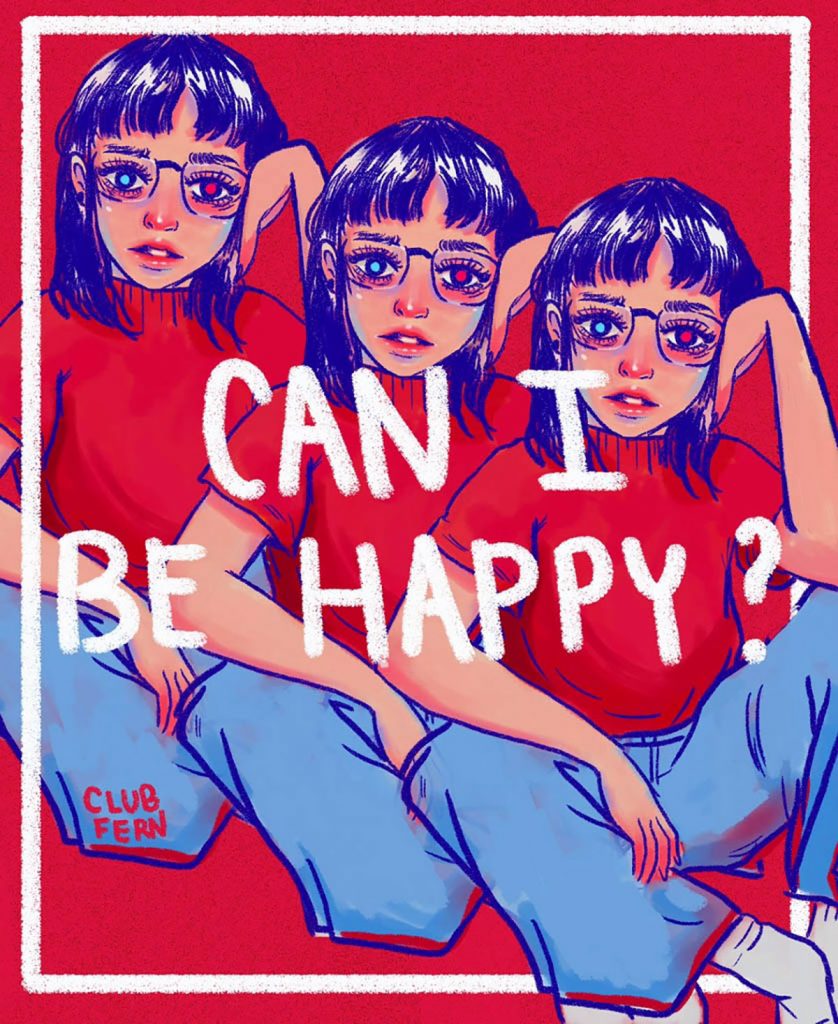