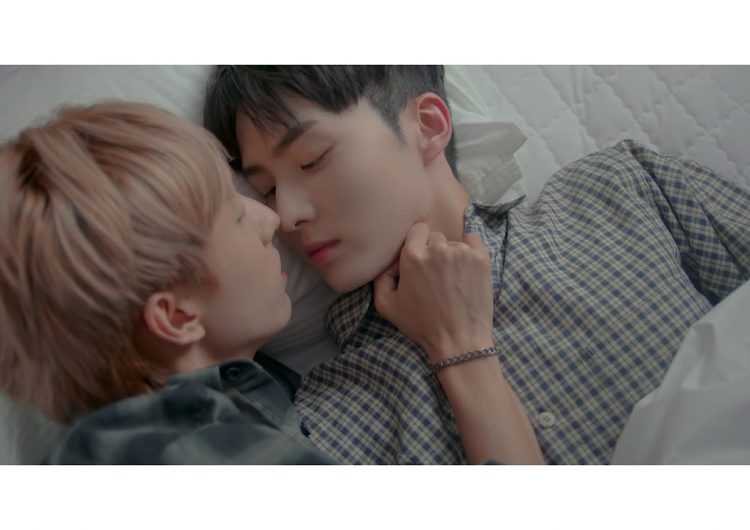 On January 22, rookie K-pop idol Holland debuted with the R&B ballad “Neverland” and caused major buzz in the Korean music industry as well as international social media. Aside from coming out as openly gay, Holland’s single itself resonates with the LGBT community, speaking of a young boy’s feelings of wanting to escape discrimination, to somewhere he can be himself and love freely. Pair that up with a sweet music video that portrays him in a romance with another man, and it even showcases an onscreen kiss between them.

While Holland himself was met with praise and acclaim for his monumental debut, there was of course, the inevitable hate that came along with it. Multiple comments on K-culture news websites questioned the need to emphasize Holland’s sexuality–why make a big deal of the fact that he’s gay when you don’t see news of straight idols? Other (pettier) netizens talked about his talent and that they ‘won’t give him special treatment’ because of his homosexuality (I mean, okay, but literally no one was asking to give him ‘special treatment’? Can’t you just sit back and enjoy the music and message he’s trying to share just like how you are with other K-pop releases?).

Alright, listen up before I go ahead and flip a goddamn table. Here’s why Holland’s debut and the public announcement of his sexuality are so important and significant to not just the LGBT community, but Korean society in general as well.

Unlike other Asian countries like Thailand and even the Philippines, being LGBT in Korea is still widely frowned upon–which is pretty fucking hilarious since K-pop fanservice is all about skinship, crossdressing, and member-on-member shipping and yet, people remain to be extremely closed-minded about actual homosexuality and seeing real gay or transgender couples out on the streets (also funny because if you’ve visited Korea at least once in your life, you can see how big of a thing straight PDA is there, matching outfits and all that).

In Korean pop culture, you barely have any accurate or respectable representations of a real LGBT person in Korean dramas. Should there be a homosexual or bisexual character on a Korean show, they’re usually treated as jokes or gags. A recent case in point: Kim Won Hae’s portrayal of a gay man on the popular drama Strong Woman Do Bong Soon, where his attraction to leading man Ahn Min Hyuk (Park Hyung Sik) becomes one of the series’ running jokes.

In the K-pop industry itself, many idols such as f(x)’s Amber, 2PM’s Jo Kwon, BTS’ Suga, Super Junior’s Kim Heechul, are openly supportive of LGBT rights and are even considered as LGBT icons within the community. Amber herself has stood up against critics who put her under fire regarding the way she dresses and presents herself, which as most K-pop fans know, isn’t the conventional feminine idol you see on TV. However, neither have been blatant about their actual sexual preferences, with some even speaking about it in vague terms, denying rumors, or saying nothing at all.

Now, this is where Holland comes in—who couldn’t have debuted at a better and more progressive time. It’s a big step towards normalizing LGBT in Korea, providing authentic representation in Korean mainstream media, and cultivating a more open-minded generation.

For sure, I am in no place to dictate anyone’s sexuality, but let’s get real here–as much as y’all love your oppas, unnies, noonas, and hyungs and want them for yourselves, there’s no way in hell that all K-pop idols are straight. I’m pretty sure there are a handful of them who identify as LGBT, but just can’t come out with it in the open because of how widely unacceptable it is in Korea. Celebrities who have actually come out as LGBT in the past, like Hong Seok Cheon, have gotten fired from their jobs or gotten excessive hate. One Korean model who came out even resorted to suicide after being criticized for going public with his homosexuality.

Now, this is where Holland comes in—who couldn’t have debuted at a better and more progressive time. People can say all the shit they want about him—that he has no talent, that everything is just a PR stunt, that he shouldn’t have highlighted his sexuality, whatever. None of all that erases the fact that this was an incredibly brave debut which made K-pop history. It’s a big step towards normalizing LGBT in Korea, providing authentic representation in Korean mainstream media, and cultivating a more open-minded generation. Children will see a man falling in love with another man on the “Neverland” music video, and will grow up thinking it’s okay. Young teenagers who identify as LGBT and aspire to be idols will no longer have that fear that they can’t express who they really are, because of the example Holland has set. And maybe, just maybe, this will inspire current LGBT idols still in the closet to finally come out.

The possibilities after Holland’s “Neverland” are endless and we’re well on our way to proving that love truly wins.

In the meantime, keep stepping over all the naysayers and go ahead and support Holland and the rest of the LGBT idols that will come after him.

Ha.Mu’s new diffusion line Müü.Hȧȧ is all about playful uniforms

Ha.Mu designers launched a diffusion called Müü.Hȧȧ and it’s all about uniforms with...