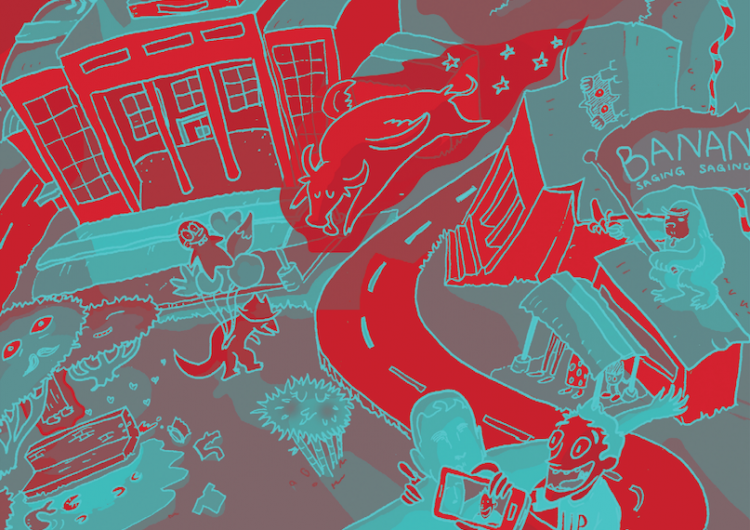 You expect a nice homecoming when you show up back in college after moving on into the real world. The young folk recognize you and excitedly greet you, as you track down still studying buddies—of course they cut class to have a snack at your favorite eating spot because, hey, you’re back!—then a favorite professor will show up and you proceed to talk as mature, working equals, which is pretty rad and mature. You leave and you’re filled with a sense of achievement because 1) you managed not to become a total bum post grad, and 2) now everyone knows it and they look up to you as a shining beacon of millennial achievement. Having the total opposite occur is a nightmare, filling you with existential dread or perhaps moderately aging you at best. I would know because it happened to me.

During my last visit to my alma mater, I didn’t see anyone I know. Considering all the people you meet and keep during the best years of your life, not spotting a single one is pretty tragic. No moldy old professors. No overstaying students who flaunted the maximum residency rule by constantly shifting courses. No vaguely remembered faces from the freshman batch of nameless org applicants circa grad year. And, most tellingly, no hallowed human institutions like the building janitor or security guard. Even the buildings look different. If you cut me open in that moment, you would have seen my human tree rings rapidly multiplying.

I’ve neglected to mention the fact that I dropped by at 10:00 pm on the Saturday after Christmas. Off timing even for the transient population of bikers and joggers who normally populate the university during the oddest hours and holidays. Obviously, I wasn’t going to see anyone. I was just there because the roads were wide open and my friend felt like a drive.

Three years of absence from the academe doesn’t seem like much on the grand timeline that is the post-college existence, but it’s really easy to forget the glory days when you’re grinding out the daily 9 to 5. Prior to that night, I hadn’t seen any need to come back for the better part of two years. Seeing my campus in its most basic form reaffirmed that I was over it. College had nothing left for me to come back to anymore. My friends had all finally graduated. My favorite professors had stopped teaching. Oh, and they closed down my favorite spot in the cafeteria.

In the crisp evening air of that unusually chilly December, I initially felt like a visitor sneaking in through the backdoor while nobody was looking. If I had come by at a more humane hour, it would have felt the same—crowded, sure, but just as empty where it really counts. I’d just be judging the little shits that make up the present student body while silently, maybe even desperately, hoping to see someone I do actually know. Fact: the young ones will never be as cool as us. I’ve conceded that my college is for the next generation now. There’s no need for a good old professor to awkwardly accommodate me if I wander by. I will simply give a little smize of acknowledgement in the background, preferably while they are imparting wisdom (or bullshit!) to some young grasshopper, and slip away like a ghost before they can react. I was never a favorite student of his anyway! We’d only engage in superficial pleasantries before the conversation grinds to a halt! If I really wanted to make any sort of meaningful comeback, then I would have to slide on over to alumni affairs to sponsor a bench or piece of sidewalk or whatever and have my name sat on, stepped on, and vandalized until it rubbed off.

Why do people like coming back then? When are we supposed to totally let go? Why are tenth, twentieth, even fiftieth reunions a thing? (By then more than half your batch is buried in the dirt, and the rest are rushing to join them.) And, most importantly, why did I feel so home at home despite all my doubts?

Though I genuinely felt that I had nothing to come back to, I felt like I belonged to this empty place. Belong is a strong word, but I didn’t feel like an outsider, unlike going back to a former workplace, an ex’s house, or even the place of a friend you regrettably no longer get along with. It wasn’t weird. I didn’t have to explain my being there (“I’m just getting my things…” with matching forlorn expression) to anyone, including myself. If some security pulled us over, two random dudes driving around in the middle of the night, and asked us what the hell we were doing, I could say we’re visiting alumni, and everything would be all right. Probably.

Nabokov once said one is always at home in one’s past. Presumably Vlad felt this way because he didn’t grow up in some gulag, but he’s got a good point. I may have been physically present in my campus, but what I was really visiting were all my old memories of it. Where I liked to eat, where I hung out, where I went to sleep in between classes, where I locked myself out of my car on a rainy day, where I aced a class, where I looked for my final grade and discovered I had failed, where I got rejected, and where I marched off stage, diploma proudly in hand, and my beaming parents triumphantly declaring: “No more allowance!” (I then unrolled my diploma and discovered it was a glorified IOU: “Congratulations! Claim your actual diploma next month!”) The entire place can burn down to the ground tomorrow, but I’ll never forget the experiences. Unless I was trapped in the building or something.

If you’re not like me—and by that I mean still in pursuit of higher education—the point of all this… is not to think about any of this? Not yet at least. Don’t to stupid things because you have to bank them good memories. (Do them just because.) There is merit in just embracing everything college throws at you. Nostalgia is terrible because it paralyzes you for hours while you reminisce, but it’s also great because everything—bad times, even the most mundane of memories—become magical when viewed through its sepia tone lenses. Unlike pirating an old video game or movie you loved and discovering how terrible it actually was, there is no way to go back to college and ruin it for yourself.

SHAREBy Coleen Ramos There’s no mistaking that our country is obsessed with hugot....