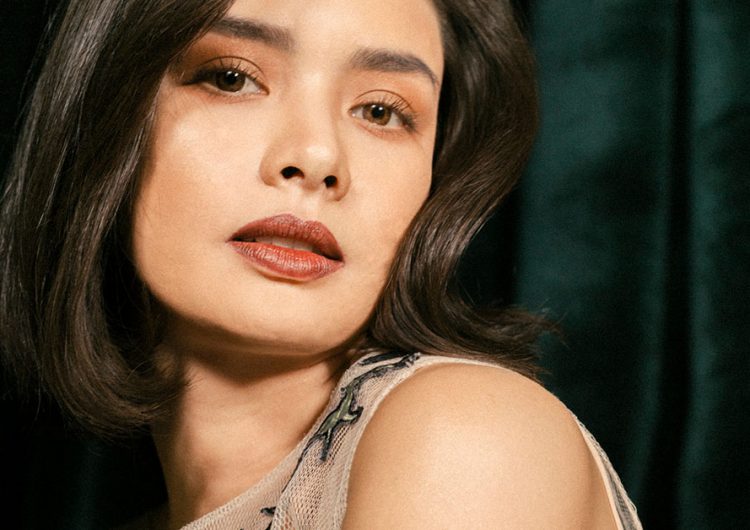 “She doesn’t do interviews in person.”

They’re words no writer likes to hear, yet this was the publicist’s edict handed down from Erich Gonzales’s team soon after I’d arrived at the set of her Scout cover shoot. Less than a minute later, though, so fast I almost got whiplash, a new directive was given: she was actually ready to be interviewed, like, right now.

Perhaps the initial directive was the by-product of the actress’ 13-year-old showbiz career. Now 27, Erich had her start in the entertainment scene at age 14 via the talent search show Star Circle Quest and has since spent nearly half of her life under the glare of the spotlight. It couldn’t have been easy growing up in an industry where a young actress could only have so much control over what gets spun and said about her; maybe the “no face-to-face interview” policy was set in place as a form of protection.

Yet Erich, in person, is direct and cordial, with an easy laugh and the knowledge of the right words to convey what she means without revealing too much—a total pro who knows how to run the show with equal parts discretion and authenticity.

For example, when asked what attracted her to be part of Siargao, the Paul Soriano-directed movie that starred her and Jericho Rosales, Erich cites the resonance she felt with her character Laura. “She’s a vlogger who wants to find herself and do some soul-searching—like an  Eat, Pray, Love type of thing. I was offered to play her at a perfect time, because I had also wanted to do the same thing: some sort of rebuilding and re-creating myself.” The remark sounds simple enough—the kind of existential crisis most people go through in their 20s—until Erich later on reflects on what she took away from the past year: “Marami akong lessons na babaunin from 2017. I learned that it’s okay to prioritize myself, that it’s not wrong to love myself more. Before, I’d think of everyone else first, but I realized last year how short life is to keep doing that all the time. Putting myself first—I learned that a bit late, but at least I know better now.” A keen observer of local showbiz would connect her words with Erich’s breakup with actor Daniel Matsunaga early last year, which resulted in a mini-saga that played out on social media. And while both parties have kept mum about the reasons for the split, Erich’s reflection seems to be an effort to counter rumors regarding the issue without directly addressing it and accidentally reviving a fire that has long died out.

And Siargao did provide her the space and escape she needed, along with the necessary push to remind her of her inner grit. “The film has me surfing in the first scene, so I had to learn it fast. On my first day on Siargao, on my first try, I was able to catch a wave, so I guess my sense of balance is okay—tsamba!” she recalls.  “But I knew I have it in me to take risks. I’m not afraid to take chances and just jump in right away. Wala nang, ‘Naku, baka ganyan…’”

She did have her hesitations, though, when it came to saying yes to Tanduay’s long-standing proposal to become their calendar girl. “Too much risk ba ’yung Tanduay?” she laughs. “They’ve been asking me for so long to model for them, but every time, I’d tell them I wasn’t ready yet.”

However, when they came wooing again last year, Erich felt it synced well with the other projects she was already working on. Aside from Siargao, there’s also the suspense thriller We Will Not Die Tonight, where she plays a stuntwoman facing a life-or-death situation; the latter is a production that reunites her with frequent collaborator, director Richard Somes, and will also credit her for the first time as a producer. “For that movie, I was required to gain muscles because I had to do all my action scenes; I had no stunt double. I really had to be strong physically, so with Siargao pa, the workout had to be done double-time, triple-time,” she reveals.

“And that’s when Tanduay approached again, so I thought, ‘Yeah, I think I’m ready for it now.’ I’m not getting any younger, I’m at the right age, so I said, ‘Let’s do it.’ But I asked if I could have a say in the creative process, and they were okay with that. It became a collaboration, and I’m happy with the outcome. The photos weren’t just about being sexy; they’re about being strong. And bold.”

The project is perhaps the most visual marker of the kind of creative independence and control that Erich wants to pursue more in her career. Though a product of a studio-based talent search, she never really took the same track that most other artists her age and with her same showbiz beginnings did, as her filmography features a mix of mainstream projects, mostly under her home studio, and a lot of smaller independent ones. “I like trying to learn new things, especially those I haven’t done before, so my projects, especially recently, have been out of the box. I like working on indie films because I feel freer to express myself in them; there are no limits, unlike in mainstream movies where there tends to be a formula [to making them].”

Independent projects also provide her the opportunity to flex her other artistic muscles that cannot be tapped simply by acting onscreen. The script for We Will Not Die Tonight, for example, was presented to her by Somes, who felt that the story was too big for any big production house to want to take on. “So I read it, and it’s a super interesting story of survival that plays out all in one night. The title says it all: ‘We will not die tonight.’ Ayun na siya talaga, so there’s a lot of running and action scenes.” Her interest piqued, Erich decided to sign up as both the producer and the lead actress, and she soon found herself quite involved in the work that goes on behind the camera. “I’m really part of the whole production process, even in the editing and the scoring of the scenes. Pumapapel talaga, pa-involved, haha!” Set for release this year, We Will Not Die Tonight will be the first movie produced under her new production company EG Films, and Erich is excited to do more in the future. “If there are more opportunities for me to produce movies, why not? Kahit hindi ako ’yung artista, as long as I believe in the story, I’ll go for it.”

Storytelling and the work it involves have kept Erich excited about acting for the past 14 years. “Importante sa ’kin na naniniwala ako sa isang project, that I can put my heart and soul into it. Otherwise, why do it?” What she isn’t keen about are the other aspects of her job: mainly, the socializing and especially the small talk that she finds excruciating. “Hindi ko talaga kaya ’yun,” she admits. “Sometimes, I don’t get invited to parties anymore kasi alam ng organizers hindi naman ako pupunta, haha! Or when I do, I’ll just say hi to people and then I’ll head home early. Hindi talaga ako pala labas.”

Whatever free time she has, Erich prefers to spend it reading or tending to her home garden—“I grow roses, lettuce, anything I can”—or adding to her arsenal of short stories and poetry. “Someday, I’ll share them—when I have the courage already! They’re super personal kasi so I’m keeping them to myself for now. Maybe I’ll turn some of my poems into songs.” She also focuses on her various businesses and buy-and-sell ventures when not busy with acting commitments. “I’ve always been the responsible type. Even though I’m the youngest in the family, I’m like the ate. And my life is an open book anyway. I’m from Davao, I came from nothing—as in walang wala, so alam ko ang pakiramdam ng parehong meron at wala. That makes me really value hard work. So instead of buying designer bags, I invest my money instead.”

With 2017 a full one for her, both emotionally and creatively, Erich has nothing but excitement for the new year ahead, especially since on top of We Will Not Die Tonight, she has a new teleserye with ABS-CBN titled The Blood Sisters, which will have her playing triplets. “I look forward to a year that’s more productive and rewarding. There are so many things coming out in 2018 and it’s overwhelming, but I’m just embracing everything.” Lest people forget and think it’s all been handed to her, though, she’s quick to remind the public what she has put in to make things happen, and that her work may speak for her better than anything she might say.

“I’ve learned that it’s not enough to watch out for opportunities; sometimes, I have to create them. That’s why most times, I don’t overthink the things I want to do. Instead of being sikat, I’d rather be known for just going in and doing the work.”

We’re all here for the merciless fact-checking and receipt-pulling, but remember to hold...