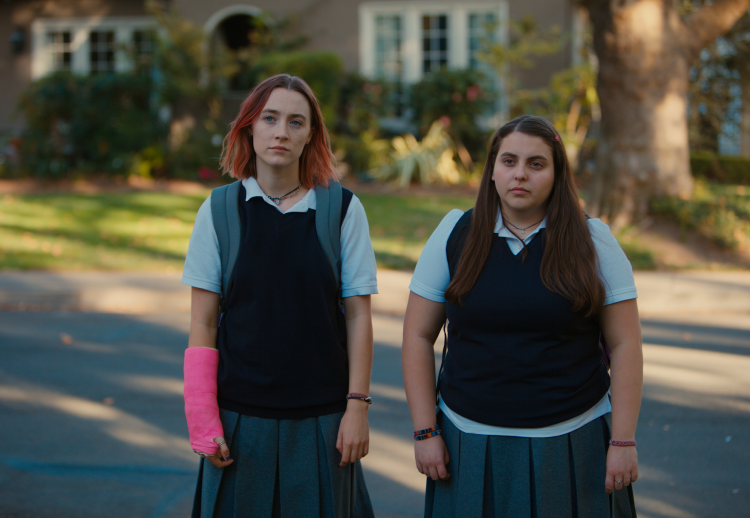 After literal months and months of waiting, Lady Bird is finally set to hit Philippine theaters next week on February 28. If you’ve watched it through other *cough*illegal*cough* methods, you already know how great it is as a coming-of-age movie and now it’s time to support it in the cinema. If you haven’t, then believe me when I say that this is the film every lost teenager and millennial needs right now.

Don’t know what to expect? Here’s why you can’t miss Lady Bird when it shows here.

Okay, so I am aware that most of the cast are in their 20s, and while they aren’t as age-appropriate for their characters, we love that Saoirse Ronan didn’t cover up her face acne for the role. She actually looks like a regular awkward teenager with blemishes and unprofessionally dyed hair. Lady Bird’s hilarious best friend, Julie, played by Beanie Feldstein, is on the heavier side, while Lucas Hedges gives us endearing Juno-era Michael Cera vibes.

The entire movie doesn’t just focus on Lady Bird’s coming-of-age, but also her strained yet close relationship with her mother. It is the main relationship that the film revolves around, with Greta Gerwig mentioning in an interview that everyone’s first loves will always be their mother. You’ll want to hug your mom after this.

We know you’re still not over internet boyfriend Timothée Chalamet’s performance in the critically acclaimed Call Me By Your Name. Now it’s time to see him act again (in a slightly more annoying role) alongside fellow Oscar-nominated actress Saoirse Ronan. These two are a talented powerhouse pair with fantastic chemistry onscreen. We ship.

Once you watch this movie, you’ll probably be putting Dave Matthews Band’s “Crash Into Me” and Justin Timberlake’s “Cry Me a River” on repeat–both 90s and early 2000s bops that director Greta Gerwig fought for to include in her film. If you’re a millennial on the older side, the music will definitely give you big bouts of nostalgia.

5. The script and direction are A+

This is not the cheesy, overdramatic teenage film we’re all so used to watching while growing up. What makes Lady Bird so great is that it’s so close to reality. The script is filled with things teenagers would actually say and heartfelt scenarios rooted in subtlety. It hits home. Feels guaranteed. Greta Gerwig is bomb and we can’t wait to see the new work she has lined up for the future.

Crochet away. We talk to four artists on the art of crochet and...