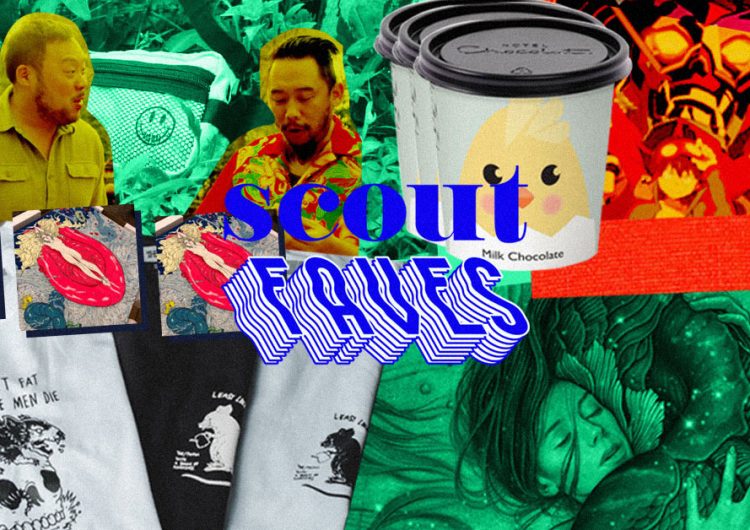 NOBODY POP UP STORE – I fuck with the guys from NOBODY pretty hard, and their collaboration with THE/TWPM is not just a milestone for them, it’s also another display about why I like them so much. The THE Store at Cubao Expo was redesigned and outfitted with stocks of the NOBODY x THE/TWPH collaborative merch, and I accidentally stumbled into their launch last Saturday. Aside from NOBODY’s distinct yet malleable brand identity, the community they’re part of just feels so fresh in the best way possible. They have no airs. I felt nervous entering the store but after a few minutes I felt all chummy with these supposedly bunch of nobodies. Feels great.

UGLY DELICIOUS – Okay, I haven’t watched this show and it wasn’t really under my radar, but after a recommendation from a friend in a Messenger group, I feel like I know what I’m watching t̶o̶n̶i̶g̶h̶t̶ this weekend. Based on the trailer, it’s a series about the stories of dishes around the world from knowledgeable, “real” people who aren’t afraid of censoring themselves without sounding too profanity-laced as an angry Hell’s Kitchen Gordon Ramsay. Okay, that sounded pretty vague. Just watch the trailer.

The Shape of Water – This Guillermo Del Toro piece was absolutely magical. Despite its strange themes, I love how it centered on the philosophical concept of the Other as well as deep human connections. Del Toro deserved that Golden Globe for Best Director.

Hotel Chocolat Tiddly Pot – Man, this entire month was total shit for me, much especially the last week. It’s like hell was really out to get me. But thankfully, Lex brought home this cute cup of chocolate drops from England’s Hotel Chocolat. They actually taste like any regular good chocolate, but I just really love the packaging. It’s bound to put a smile on anyone’s face. Best part is that there’s a different animal design for every flavor.

BASTARD Belt Bag – Finally have the perfect yellow belt bag that I’ll be beating up because of how much I’ll be using it. The compartments are perfect for all my things. Always love belt bags and how practical they are to my daily commute.

Gurren Kagann – Been seeing the characters of this show while I was growing up. I don’t know why I only decided to go and watch it now. I sure was missing out! I love the art and animation style and character design partnered with a good story and pretty entertaining humor. As expected because the makers are the same people who made Kill la kill. I’m hooked.

Prime Meridian: Vinyl on Vinyl x Mizuma Gallery — Vinyl on Vinyl has always been one of my go-to art spaces because of their eclectic shows and pop culture-centered themes. This month until April, they’re collaborating with Japan/Singapore’s Mizuma Gallery for this new exhibit, showcasing works by various Asian artists from Jakarta, Japan, Manila, and more.

Contagious: Why Things Catch On by Jonah Berger — Picked this up at the Big Bad Wolf Book Sale last week. It’s such an interesting take on how and why content goes viral. Chockfull of ideas for advertising products, with anecdotes about promotions that work and didn’t work. Can’t remember the last time I breezed through a “business” book this quick. Would recommend!

SHAREBy Nico Pascual Image: Design Boom and Greenpeace The residents in the Arctic...

SHAREIs it a cliché to have Filipino pride right now? Yes and no....