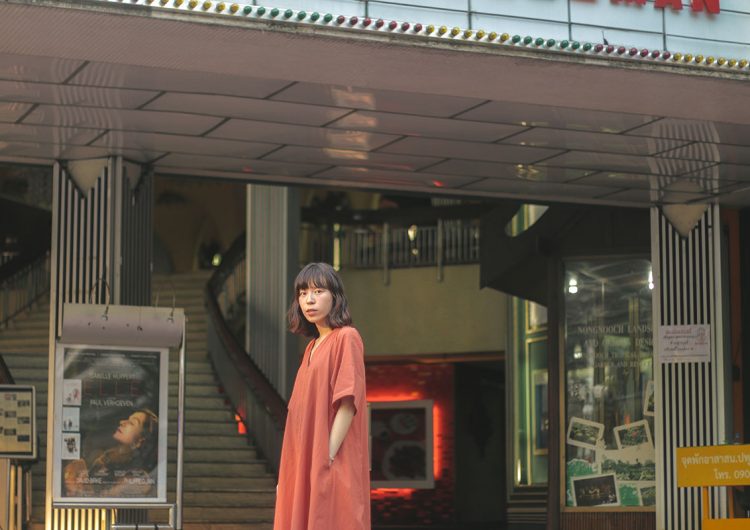 It was in 2015 when I first learned about June Patcha Poonpiriya. I don’t know how it happened, but I’ve been invested in Thai pop culture for so long. After bingeing on teenage series Hormones, I somehow stumbled upon Nawapol Thamrongrattanarit’s 2013 coming-of-age film Mary is Happy, Mary is Happy. The film was based on 410 tweets of a certain @maryonly. In the film, June plays Mary and takes the viewers on an adventure with her best friend in their last school year. With support from the Venice Biennale and Gucci, the film premiered at the prestigious Venice Film Festival.

It’s a refreshing and artistic take on what might have been an ordinary story about two best friends. Since then, the film has left a mark on me. In fact, it’s so moving that I always introduce my friends to Thai cinema with this film. Two years later, I find myself walking right beside her as if it were a scene culled from some Thai coming-of-age film or maybe just a hazy dream.

“Do you ever get stopped for a picture when you walk here?” I ask upon noticing a few heads turning as we walk along the streets of Siam Square. It’s already late in the afternoon and we are almost swallowed by a crowd of school boys and girls. “Yeah, there are times. I always go here after school,” she says. “But I don’t think I’m that famous.”

There could be some truth to it, but there is more to June than sheer fame.

On our way to the historic Scala Theater (June chose the location herself), June recommends various restaurants here and there. Then, she tells me to visit Siam Center. An entire floor of the said mall, she says, showcases clothes by young local designers. By the way she speaks of it, June seems well-versed in Thailand’s fashion scene.

June’s fondness for fashion led her to take up a fashion degree at Chulalongkorn University. She attributes this interest to her mother. “I grew up with piles of clothes,” she says. “As a girl, I enjoyed dressing myself.” Her affair with fashion further materialized when she took extra classes before entering college.

Some of June’s fashion sketches for school.

June proved that she’s more than just a dreamer when she established her own business.

“I’m sorry. That’s such a lame name,” she says as she explains her Instagram-based clothing shop called J.C. The abbreviation stands for her name, June, and for her friend’s name, Cake.

A few of the items available at June’s co-owned online store, J.C.

“At first, we just wanted to make clothes that we wanted to wear but can’t find anywhere else. But then we decided that maybe other girls feel the same as we do, too. We were like, ‘We’re fashion students! We can do this!’ So, we bought fabrics, we decided on the silhouettes, and we looked for tailors. We would model and shoot the clothes ourselves and post them on Instagram. Now, it’s been around for like three or four years. And each piece still sells really quick.”

Gloc, a quaint retail concept store June co-owns, has also opened just recently. The lifestyle shop offers a mélange of delightful fashion, beauty, and other things. “I really want to have my own company. You know, people like to do start-up businesses right now. I’m one of those people,” June says.

Despite her apparent fascination in fashion, June admits that she enjoys illustration and graphic design more. Eager to build her portfolio then, she even served as her team’s creative director when they joined—and eventually won—a contest under NYLON Thailand.

Her team’s entry for NYLON Thailand’s “Your Own Private Issue” contest, where she served as the creative director. Their shoots feature Bad Genius’ lead actress, Aokbab Chutimon Cheungcharoensukying.

“I like drawing portraits, especially female ones,” she says. June has always been drawn to the complexity and diversity that the human face can express. And she admits, “I see my own emotions in those portraits, too.”

It overwhelms and amazes me how June can do so much despite her busy schedule as an actress. But in truth, June had to overcome her fair share of inhibitions and self-doubt. “After Mary is Happy, Mary is Happy, I realized that I can’t plan everything in my life. I just have to go with the flow. I felt like I was this entirely different person, but I do feel more relaxed,” she says.

Late last year, she appeared in another one Ter Nawapol’s films, Die Tomorrow, together with a star-studded Thai cast. Her comeback to the big screen after a break, Die Tomorrow has been making waves in Thai cinema when it came out.

Watching June onscreen is enough to amaze me, but being in her presence in her homeland, the Land of the Free, is stupefying. Thailand has always been independent unlike her colonized neighbors. This is what June embodies: a free spirit. And perhaps, this is also what drives her versatility.

“Honestly, just do whatever you want. You don’t have to listen to people who say you have to set your mind on one thing, and proceed straight to that and only that. It’s your life! If you want to do many things, that’s okay. You just have to do everything you want to do as long as it’s not tiring you out. And as long as you’re happy do that! You don’t know what’s going to happen next. If you enjoy doing anything or everything, just go for it.”

As our interview comes to an end, I realize that, though I’ve seen much of Thailand in popular culture, I’m still a stranger in this foreign land. “Where should an artsy traveler go to?” I ask. “Oh, you should check out Thailand Creative and Design Center. They have it in Chiang Mai, too.”

Feelin’ a bit blue this new year? At least we have these

SHAREDysmenorrhea SUCKS. To all my fellow peeps with a uterus, you know how...