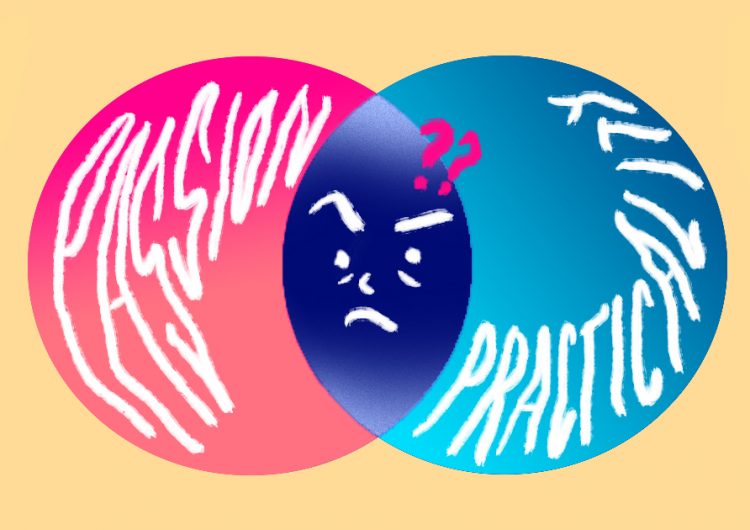 You’re reading this because of the following scenarios:

First, you’re almost done with high school and college excites the shit out of you. Yet there’s this creeping anxiety at the back of your head whispering a long debate on whether you should pursue your passion and go into art school and whatnot, or take something practical to ensure “success” and please your parents.

Second, you’re done with college and you did pursue your passion, but society complains that artists starve yet they refuse to grant you your right to get paid an ample amount. They bargain, or ask for a “friendly discount,” because uhh, “Art shouldn’t be expensive right?”

Third, you fell for the myth that pursuing passion means not earning well so you went the other direction. However, there is no contentment in the amount of money you earn, or handwork you spew, because it’s not what your heart wants. You question and question whether you should quit your job and do something worthwhile, even though this means steering far from what you studied or initially chased.

Lastly, you’re just curious, or probably looking for flaws in this article because you’re sad and have nothing else better to do.

Anyway, I’ve been in the same situation, and am still probably here. Contemplating keeps me up some nights, and let me share some of my realizations through this unsolicited advice. Here are some things you should (probably) consider when deciding where to side on this long debate between pursuing passion or choosing practicality:

Here’s something they don’t tell you when you read up on this issue: passions change. When I was nine years old, I always believed myself to be an illustrator someday. I pursued this until I was in high school, because I was too scared of words. I felt as if everyone can be a better writer, because anyone can type anyway, right? Although during cold nights and fluctuating teenage sentiments, I made poems and kept a journal for myself.

It was only until college when I started writing comfortably in my papers, and my professors saw potential. They encouraged me to make a blog (which never happened), and I assessed my happiness in my chosen course. Eventually, just before graduating, I did what was dreaded: I shifted. I knew I wanted to touch people through my words, and doing so gave me a kind of contentment indescribable. As of the moment, I call myself a writer, because it technically is my job. However, after years of being one, this question sometimes digs my brain: If I die in a freak accident today, do I die with a smile?

My point is tattoos are more permanent than passion. The same way people grow up and old, they get exposed to different, probably weird, things which may snatch one’s interests in a fleet. Two words of advice: keep exploring.

When they do change, shifting is okay

You’re out there doing what you think your heart wants you to, and then one day, you just don’t feel right. Don’t panic, this is completely normal. Shifting, whether this means courses in school or life, is completely okay. If you think you were born for one thing and one thing only, then that’s sad. Most people, if not all, have wavering interests. No, it’s not an identity crisis, nor are you experiencing depersonalisation.

It’s simple: people are complex, and life is not a nursery rhyme. If you’re here pondering on what to do, then you’re dealing with a good problem. Thank your god that you’re a dynamic character rather than a flat one, and if your life were a movie, it won’t be directed by Michael Bay.

Now what do you do? This is where it becomes trickier. Another thing advice columns don’t take into consideration when you google this topic is privilege. In this whole spectacle, parents or elders often get branded as the opposing force. However, consider where they’re coming from. Were they the ones who put up the livelihood, which makes you afford what you can today? Thank them, respect that. Although you cannot berate them for how they see the need to pursue practicality, it doesn’t mean you should also see it this way.

Do it to change the perception on the local art scene. Pursue it for the sake of artists who cannot.

If you have the privilege to go after something you want, do it for a cause. Do it to change the perception on the local art scene. Pursue it for the sake of artists who cannot. Let people know that creativity is not for free, and is the root of all innovations, because when machines take over, creativity is what’s left for humans.

If you don’t have the privilege to straight up pursue passion, then be patient and don’t let inspiration die. Truth is there’s the race card, the class card, and different kinds of discrimination that establish bias and snatch opportunity. It is almost impossible to drop everything and chase the sunset. However, keep creating in your spare time. Thinking of new ideas is free. There will come a time where your passion becomes practical. With the growing movement to reestablish the value of humanities in society, hand-in-hand, we’ll get there.

Lastly, it all boils down to success. However, this dreaded word does not necessarily mean graduating, earning a huge amount of money, and building a family. Success is not linear, although capitalist industries make you want to believe so, because they need workers who are content with three meals per day.

Don’t fall into the trap of establishing a strict correlation between success, money, and fame.

Success may mean an entirely different thing: it can be as simple as living in the suburbs and making art everyday, it can mean being the voice of those snatched off of one, or it can be the contentment from immersing one’s self in different cultures and subcultures. Don’t fall into the trap of establishing a strict correlation between success, money, and fame. Take this pressure off your shoulders, because they are boulders that are meant to bring you down unless you’re part of the 1%. While it is undeniable that you need money to feed yourself and pay the bills, this shouldn’t be the cliché measure of worth, contentment, and happiness.

SHARENike is in the business of making old favorites better this year. After...

SHAREGet ready, Studio Ghibli fans. 2020 is still your year with a new...