You can say the socio-political climate in the Philippines can only be described as FUBAR’D (F—ked Up Beyond Recognition.) Just by scrolling through your newsfeed or listening to your lunchtime news makes this clear as day. We don’t flinch over the words poverty and death. The same goes for fake news turning fiction to fact. Circumstances right now are so absurd that Dean Colin Marcial’s Manila Death Squad might as well be our reality.

“By the time we screened a rough cut in May 2016, he was elected by a landslide, triggering a wave of violence that easily outpaced the Marcos dictatorship within the first year.”

Streaming worldwide this June 25, Manila Death Squad stars Sid Lucero (Apocalypse Child) and Annicka Dolonius (Ang Nawawala). It’s the real state of the nation laced in truth rather than empty political promises  “This film is based on stories my grandfather told me about the Davao Death Squad — a fearsome collection of vigilantes employed to wipe out crime under then-Mayor Rodrigo Duterte’s watch,” the press notes of Marcial read.

“It was almost speculative fiction, 15 minutes into the future, but by the time we screened a rough cut in May 2016, he was elected by a landslide, triggering a wave of violence that easily outpaced the Marcos dictatorship within the first year.”

With its neon and epilepsy-inducing visuals, it tells a tale of another night in the streets of Manila. It narrates a night in a beer garden where a female journalist and a leader of a vigilante group cross paths for a chance of an exposé. It has been praised by IndieWire for being an “electric love letter to Tarantino.”

Manila Death Squad is the hanging question over every Filipino’s heads that we seem to ignore.

But Tarantino’s violence aims to entertain, like when they shot Marvin on the face in Pulp Fiction or when The Bride from Kill Bill ripped her rapist’s flesh from his lips. The violence in Marcial’s film was more of a punch in the gut than a comedic punchline.

A weird fact about living in Manila is the omen that singing Frank Sinatra’s “My Way” in karaoke bars bring. Hence, the “My Way” killings article in Wikipedia. The narrative starts with that same song, but with Flying Ipis’ Deng Garcia on the mic. What followed after a great cover was political speculations over King’s Cup, murderers calling murders as a civic duty, and an update on the nation’s body count. Just another night in the city of a “thug president” as its leader. 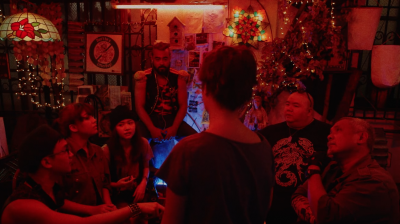 Manila Death Squad leans more on haunting than entertaining. Supposedly, it depends on how much the war on drugs or rather the war on the poor has affected you. The B-movie approach in visuals nudges for a chuckle while the narrative begs you to wake up.

Manila Death Squad is the hanging question over every Filipino’s heads that we seem to ignore. The question of human rights and where does everyone stand. The death squad knows that we are aware. We are past awareness. What we do after is the real question in the film’s electric neon lights.

Remove the colorful neon and loud punk outfits, what you’ll get is a possible news story 15 seconds from now.

Lord knows that we don’t need an actual death squad in the city to come further to fruition. What the nation needs right now though is the film that depicts that possibility. Manila Death Squad deserves more than a nod for their Tarantino-esque tone.

The grittiness and the straightforward message is the nation’s wake up jolt trapped in celluloid. Remove the colorful neon and loud punk outfits, what you’ll get is a possible news story 15 seconds from now. The same story we see in our feeds and in headlines. But that’s exactly what Marcial’s film wants you to see: this has to stop being the same old story.

Want to watch this short film? Head onto their Facebook page for their June 25 worldwide streaming.

SHAREOne of the biggest modern concerns of our society is the lack of...