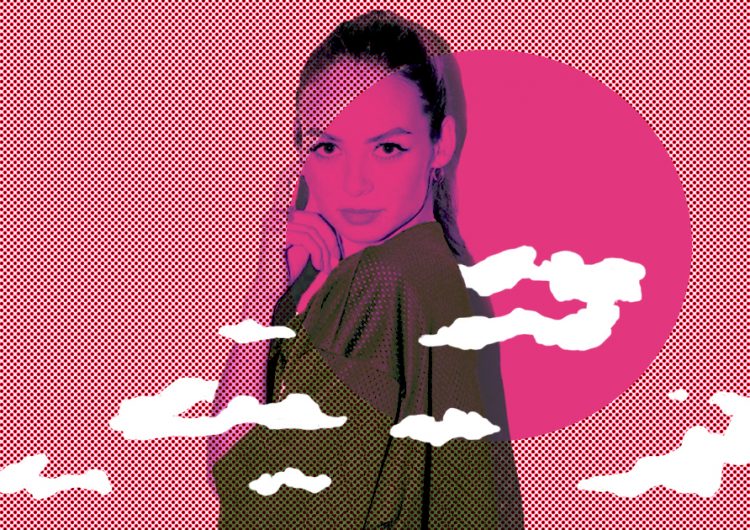 For someone in her early 20’s, Emily Oberg has a pretty stacked resume: editorial producer at Complex for three years, creative lead for KITH’s women’s line for one, and now owner of her own lifestyle brand, Sporty & Rich. Her personal Instagram is full of mirror selfies and candids (selfies get her the most likes, she says), so how does she get the time to be a full-time owner while practicing her own consultancy? How does she do it? And how does she do it without seemingly breaking a sweat?

A conversation with her leads to the answer: there’s no division between what her passion and her day job. Whether she’s talking about sneakers (“The The first sneaker I bought were these Nike SB Taxi cab lows,”) her brand (“It represents good design and quality things and minimalist and simplicity,” or her visit to the Philippines (“I think it’s nice to come back here and be more in touched with my roots. Im really close to my filipino side more than my white side,”) she proves that she’s just who she is online as much as she is in real life. For some, that may not be a compliment, but Emily Oberg has achieved a rare transition: from picturesque-influencer to a creative tour de force.

Here in Manila in time for Oxygen’s latest collection  #COEDbyOXYGEN, we sat down with Emily for a short group interview. Here are some excerpts:

The streetwear industry is mostly dominated by men. How did you break through that?
Well, when i went to Complex, i was one of the only girls there. I was the only girl on the video team that we started. It was me and a few other of my friends who are my best friends now.

But it wasn’t so hard because i feel like there wasn’t so many girls in it, they were kind of more accepting and wanted more girls to be involved and a girls point of view. And then I just started to cover more female-centric topics and then obviously at Kith, I really extended their woman’s division. It’s been pretty easy. people always say that it’s hard being a woman in this male-dominated world but its actually been pretty nice for me.

With streetwear becoming more inclusive, allowing people of color and women to be part of the “scene,” where do you see streetwear going in the coming years?
We’re at a point where streetwear is so massive and its on such a big scale. When i was first getting into it, nobody was in the industry, maybe a few other people.

I’m from a small city so there were only a few other people who were into it. its very special but now there’s like Louis Vuitton then there’s all these brands doing streetwear and I think it’s good.

I think it will come back to the roots though. We’re seeing so many young people start their own street brands and i think We’ll continue to see streetwear in the luxury space, which is nice, but i think some people think that it isn’t authentic to what streetwear started in. So i think there will be kind of a balance. it’s like the smaller ones away from the luxury and the other ones collaborating into that world.

You said a lot of young people are starting their own streetwear brands and it’s very diverse but because you have a certain authority over knowing what really is the core of streetwear, in your perspective, what makes a certain brand pop?
Well, i think the brands that do the best are the ones that have a vision and a meaning. I always like to say that the “why” is so important with what you do. If it doesnt answer “why” then it doesn’t mean anything. So I think if people want to start a brand to make money or to say they have a cool brand, I think it wont work. But if you have a foundation, the values behind it, and the reason why you’re doing it, then it will be successful.

How has your style evolved since getting involved in the streetwear community?
At first, I was a big tomboy because there were only two women’s brands when i was first getting involved with streetwear but now there’s so many. It’s nice to cater to women a little bit more so i think my style has changed and got a bit more girly because there’s more options available and that workout clothes and athletic wear are becoming something you just wear everyday, that’s definitely inspired my style as well.

What did you take away from working for KITH?
At first it was my dream job and I was so excited to go there.  It was a great experience. I’ve definitely learned how to manage people and be a good boss and how to treat people well.

In a couple year’s time, do you think there will still be a necessity for streetwear to have a divide between men’s and women’s wear or will it be more acceptable?
I think its important to have female-oriented lines and to have a division. Sometimes it’s nice that everyone can wear the same thing but I think sometimes girls want to dress a certain way and there are certain clothes that can make them feel this way. I do feel like this is important because from the beginning women wore men’s stuff anyway and especially with streetwear, it just makes sense to say that it is gender neutral.

Jeff: I agree with her. we are no longer limited to a girl just wearing girl clothes. like what emily has been saying earlier, women can wear mens’ clothes and so on. I guess we’re at a time wherein theres more liberation and freedom when it comes to expressing ourselves and in a way, it also taps into gender neutrality but I guess this is a more formal approach.

What else can we expect from Oxygen and Emily?
Emily: I’m definitely working on the magazine and the clothing line and expand it to more products and i want to work more on the environment and helping animals. finding a way to do what i already do and turn it into something that can help these industries

I heard you’re a fan of Jerry Seinfeld and Larry David. What’s your favorite Seinfeld episode?
That’s a good question! I do love the “Soup Nazi” episode.

SHAREJust like any breakup, letting go of carbs can be difficult. However, if...

SHAREAs with any leaked album, the early (and unofficial) release of Tyler, the...