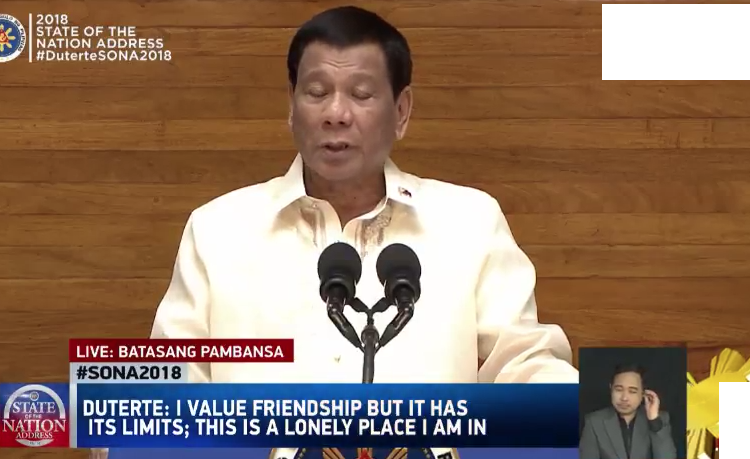 SONA is a source of drama and intrigue. Is it the fact that Bb. Joyce Bernal directed it this year? Maybe our feisty, feeling too legit to quit president is an unstoppable source of drama. Let’s face it, this nation is a Black Mirror episode that got shelved quickly for being too disturbing. We watch our dystopian future unfold in front of us today.

This is not to say that we’re staying put. There’s a responsibility within the youth. Whether it’s going to Anti-SONA protests or by the power of a hashtag, we keep it clear to the nation that we’re aware. Keep the bias commentary on the PR website of the Malacañang Palace. Here are reaction tweets from this year’s SONA that are serving better shade than any low-pressure area can.

15. Digong and Arroyo: This is not a love story

We’re filing this in for the Academy’s consideration. If this doesn’t get a MMFF nomination, the system is even more broken than we thought. This is Philippine Cinema at its finest.

14. The only ounce of truth in this SONA

"You will puke with what's happening to this country" – Pres. Dutertes SONA 2018

For once, I agree with you Pres. Duterte

This is the real tea right here. Thank you, Mr. President. When are you going to swallow it though?

A line up that no gig nor a country deserves. Is there a way to cancel our RSVP to this?

12. Louder for the people at the back

But isn’t this real for almost every government department? Let’s be real. Here’s to you, LTFRB.

"WE WILL NOT WAIVE OUR INTERESTS IN THE WEST PHILIPPINE SEA"

Our governor is incredibly brave for standing up for us. Mao Zedong will be proud.

Another one has been added, still from this year’s SONA. pic.twitter.com/Oi49OlYa6F

Umbridge is back at Hogwarts. Wizards and witches, beware.

Who needs House of Cards when you have real life suspense, action, front stabbing (not back stabbing btw) at the Lower House? #SONA2018

We’re going to rake millions in these just like the Philippine government always had.

10.  A screencap when we need to draw the line

Here’s our president teaching us the value of the word “no.”

8. Our government trying to give a f—

The best thing Bb. Joyce Bernal has done today – focusing those GOVERNMENT EMPLOYEES who are using phones, SLEEPING amd NOT LISTENING TO WHAT THE PRESIDENT is SAYING. Y'all DO NOT DESERVE OUR VOTES ANYMORE. #SONA2018

Tito Sotto should’ve had a chalkboard with “noisy/standing/very good” written on it. How hard is it to keep awake for 42 minutes though?

7. Better than any MLM

Let’s be honest, Duterte is the abusive boyfriend this country needs to shut down and report to Gabriela real quick.

We hated the prequels, but man does it represent our current political landscape.

5. Our president’s losing it

Is he not calling himself out or not?

I miss the SONAs where we see some graphs that show the actual state of the nation. Who wrote this speech. WTF #SONA2018

And yet, we are 95% sick of it. Show us more facts and not empty promises.

To be honest, I do not like how Duterte’s speech was written.

It’s not inspiring. It’s not unifying. And worst of all, hindi ko gets.

Ang gulo talaga from start to finish. At least there’s one thing that this administration is consistent about. #SONA2018 #SONAngyariSa2Years

The only category we’re giving an A+ too. Thank you Mr. President.

me after watching #SONA2018… pic.twitter.com/XQILxzL4S6

The real plot twist of SONA brought to you by Bb. Joyce Bernal.

1. The summary to end all summaries

We couldn’t have said it better ourselves.

SHAREBy Celene Sakurako If art and history is your thing, then The Sketchwalk...