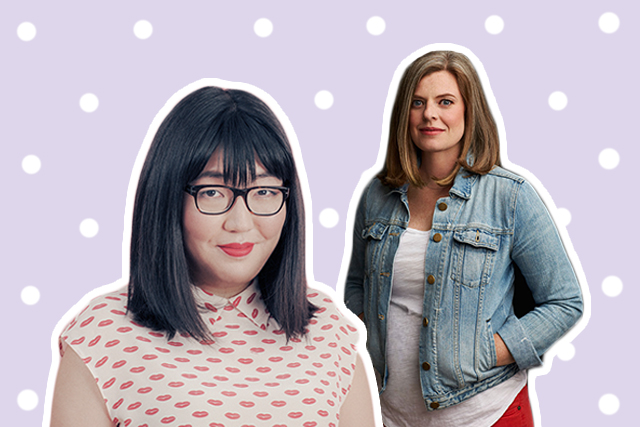 THIS STORY WAS ORIGINALLY PUBLISHED AT PREEN.PH

Have you ever wondered how fiction writers come up with characters or why people are still intrigued by coming of age stories? I was able to sit down with young adult authors Jenny Han and Siobhan Vivian to talk about the YA genre and some personal things as well. They talk about books that changed their lives and people they think are the most influential writers of our time.

What still draws people to read and write in the traditional way despite the digital age?
Jenny Han: I think that people like holding a story in their hands. There’s something satisfying about that. To be able to turn the pages of a book is different than flipping with your finger. If you ever read a picture book to a little kid there is drama in the moment of turning the page. It’s a subconscious thing but you feel maybe a bit more of the pace of the story and the heart of the story as you do that. I also think that for young people specifically, in the US I know traditional books are far more popular than ebooks. Part of it is that there’s something about being able to express yourself via what you’re reading. You can’t see what someone’s reading when you’re on a Kindle or on your phone.

What’s a book that you can categorically say changed your life?
SV: I have a few books that I remember my mom reading to me as a kid like Charlotte’s Web. I love that intimacy of knowing that every night I would go to bed [and] my mom would read me a chapter of a book and it caused me to fall in love with books.

JH: It’s so funny. I never liked being read to. I liked it when I was being read to when I was really little and I couldn’t read but I don’t like being read to, to this day. I’m a really fast reader and I always feel like people go too slow.

SV: Right. There’s a different pace certainly to like somebody performing the book for you.

Do you feel that way about audio books?
JH: I like audio books because then I’m not seeing the words. I’m just listening.

JH: For me, creating characters is always sort of an excavation process of digging and dusting it off and then polish it and then looking at it really closely. I just figure it out over the course of thinking about that character and who they are.

Describe to me the perfect place to write? Where are you, what are you eating or drinking, what music is playing in the background?
SV: I am going to say, my empty office on a rainy day, large ice coffee, and some kind of like borderline healthy snack like a trail mix or something like that. No music.

JH: I would say, a beautiful beach house overlooking the ocean on a couch with air-conditioning and a tall glass of lemonade with lots of ice, probably no music just the sound of the ocean.

Read more: I wrote a letter to my 16-year-old self

Who do you think are the most influential writers of our time?
JH: J.K. Rowling singlehandedly made children’s books big. She created an industry like that. It existed but it did not exist at that scale. So, with Harry Potter it’s made whole generations of readers and in my mind, no one can top that. Once you make a kid a reader, they’re a reader for life. So J.K. Rowling has me in the palm of her hand.

SV: I would second that. She’s sort of it.

JH: Stephen King, I would also say. Before there was a real designated YA section teens would pick up Stephen King because I think he really understands childhood and teenhood in a way that a lot of adult writers don’t. He really goes there, to dark places and not in a scary way but in a way that people understand. It feels familiar to them like deepest fears and desires.

How do fiction writers deal with “fake news” and “post-truth?”
JH: Hopefully the same way that anybody does. Whenever I’m on Twitter and I post a lot of stuff, I will look at the source and see who’s saying it. Then I’ll look at the link before I would share the information. If it turns out that it was wrong information then you need to repost it and say that it was found to be incorrect. Although, nowadays it hard to know what’s fake and what’s real, it’s about checking sources and doing your due diligence.

SV: Understanding that approaching news with the acceptance that opinions don’t agree or match up with your own doesn’t necessarily make a story fake or not real. Just being open to different opinions and different views of things but also being judicious when you feel like something is out there to manipulate or mislead.

When you began writing, how aware were you of the audience you were writing for?
JH: I was very aware because I was pretty young myself. I started writing my first book in college and so I had really been out of [teenhood] very recently. I was still in that frame of mind and thinking about that reader because that reader was still me.

SV: I similarly was working as an editor of teen books before I started writing my own stuff. I was very aware of the market.

Read more: What goes inside the mind of a creative?

If you could put Trump in a novel, what story would it be?
SV: I think it would be really interesting to see some kind of redemptive story of him kind of abandoning beliefs that I feel are only very loosely held anyway. Coming to my side and rewriting his own history. I think that would be a fun narrative to watch somebody who thinks one way and then through the experience he has at the White House comes to believe something entirely different. I would enjoy watching that.

SV: It’s such a universal experience. Experienced in ways that are infinitely unique. Ask anyone in this lobby about the first time they fell in love and who that person was and you’ll probably have a different answer every time. So, it’s a really universal experience but also unique as well. There are an infinite number of stories to be told.

JH: If someone were to say “Who was the fourth person you ever loved?” It might take you a minute to think of who that was.

SHAREDamn it feels good to be alive at this day and age. Described...