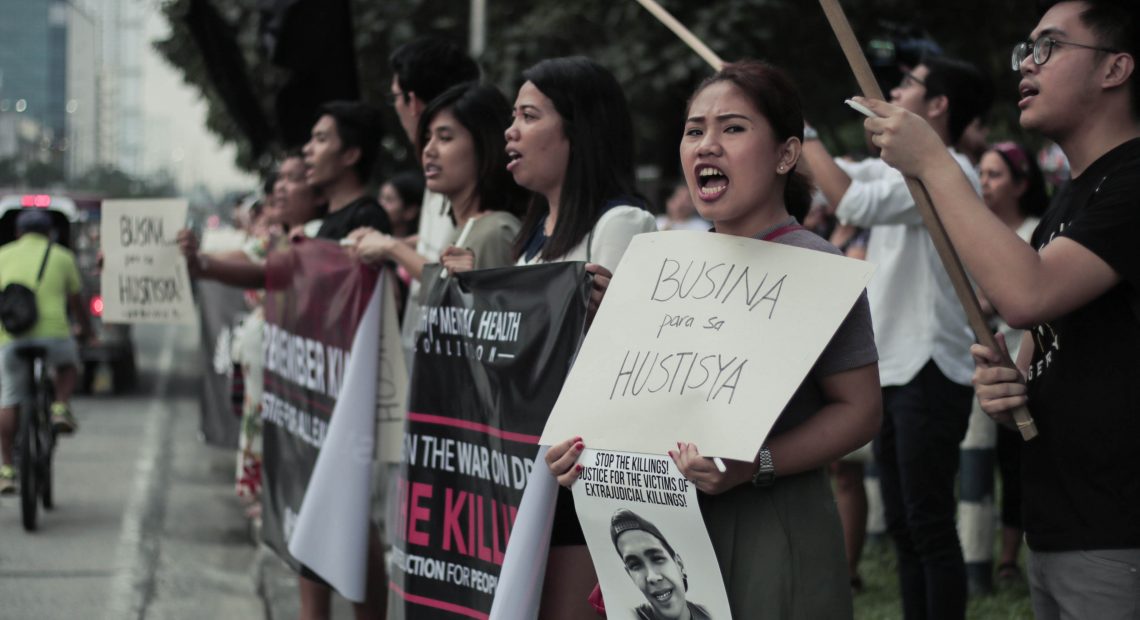 A person has a lot of first time moments like drinking alcohol or maybe losing their virginity. Going to your first protest is nothing like that. It’s not a slice of life, coming of age moment. Protests are reality at its finest. And the first one I went to was in honor of the young EJK victim Kian Loyd Delos Santos.

Kian died a little over a year ago from a drug raid gone wrong. He wasn’t just some young boy. He had now become a symbol of what the war on drugs really does. It takes away the innocent and leaves no survivors. At that time, I was accompanied by my photography intern. This was her first protest as well. The collective rage and frustration as you stepped in the Ateneo grounds hit us within an instant. Five minutes within the protest and we were already holding back tears.

It’s been a year since he had died. But his family’s frustrations and anger weren’t only theirs anymore. Suddenly, it became these people’s frustration and anger. What we’re all frustrated for and even desperate for was change. Why? Kian’s not the only boy who was victimized by this war. The body count is still growing. And yet, the change we all need feels so distant. 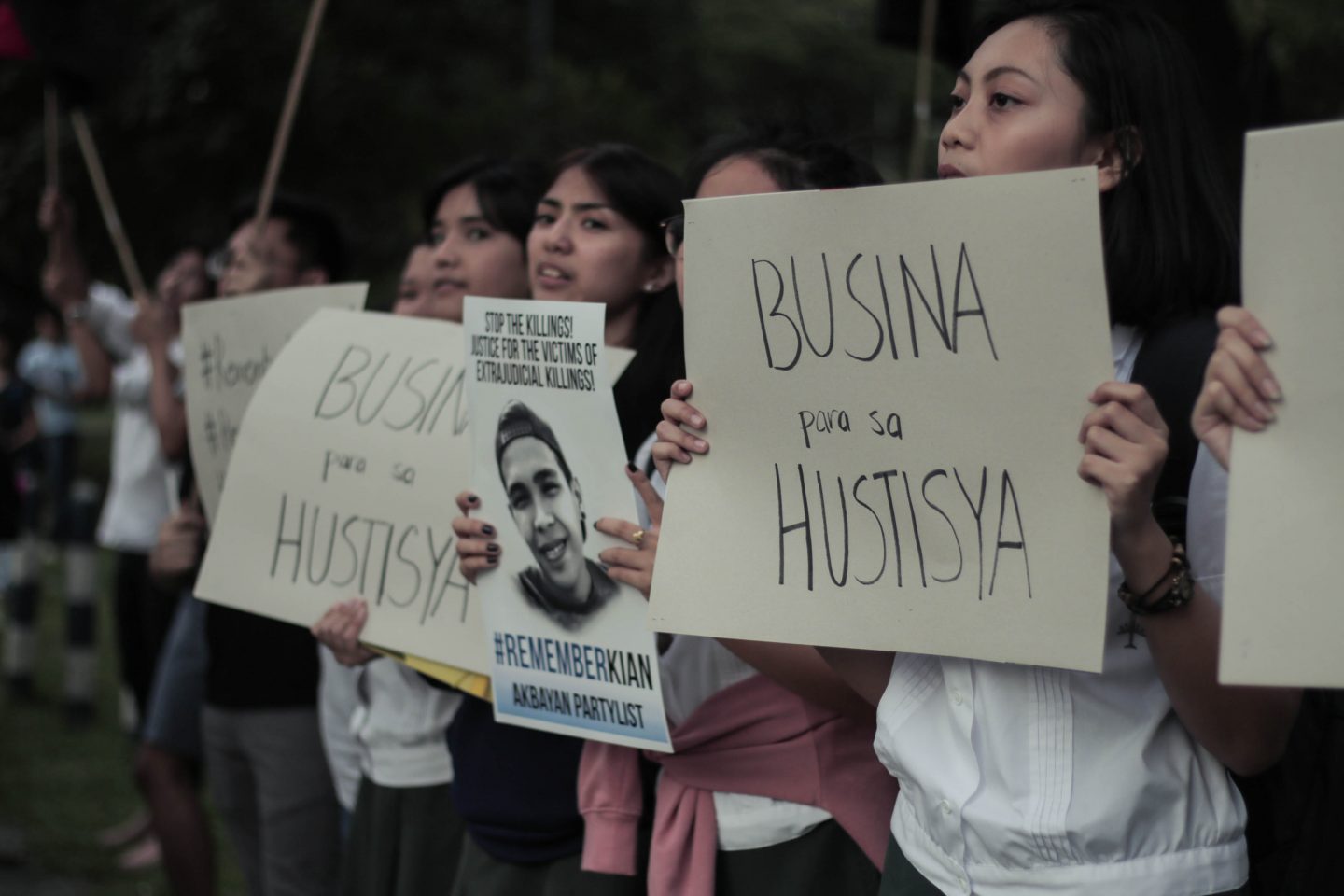 What is the place of protests in the digital landscape? That’s the question that had plagued me during the first protest I’ve attended.

“Sigaw ng taongbayan, tayo ang lalaban” was one of the chants that filled the air that day. I chanted with all that I’ve got alongside them. I listened in to the people’s pleas and anger toward the institution that had failed not only them but also the nation as a whole. Of course, it was way different from what I was used to. What I was used to is seeing the revolution televised or as a trending topic in social media feeds.

It made me ponder on this question: how powerful can a protest be in this age of hashtag activism? Hashtag activism is a powerful option, but admittedly also an easy one, which is why it’s also called slacktivism. Many movements rooted in an advocacy have both digital and “physical” counterparts: the #BlackLivesMatter movement, the #MeToo movement, and specifically here, the #BoycottNutriAsia movement. Impactful in the virtual realities we live in through their presence, but I can’t help but think of their impact in the daily lives of the people living in the cities we find ourselves in, the same cities we share with people who don’t have access to the luxury of the digital world.

Kian became one of those hashtags too. But as the months progressed, he became a symbol of this war against drugs. Going to this protest a year after his death just proved that he was more than a trending topic. People had that option to forget about this slain young boy from Caloocan. He could’ve become another viral tragedy. But people who gathered in Katipunan, Mendiola, and even in his hometown Caloocan refused to forget. All of them from different walks of life who gathered for the same cause. This something that no mere Twitter trend can accomplish.

We talked to the activists at the rally. Everyone belonged to different walks of life. Some were students, young vibrant people hungry for change. The others are veterans who have been fighting for different causes through the years. Jeffrey Dimaipit of Akbayan Partylist was one of them. He’s been in the party list since its establishment back in ’98. “Siya yung naging figure ng isang karumaldumal na pagpatay sa isang kabataan na inosente. Hindi lang naman si Kian ang naging biktima, a lot of youth, a lot of innocent people are victims of this war on drugs ni Duterte. Kaya lang, naging instrumento si Kian, alam naman natin papaano lumabas yung galit nung mga taongbayan dahil dun sa nangyari,” he enlightened us. “It can happen to anybody kahit na you’re not involved in drugs.” 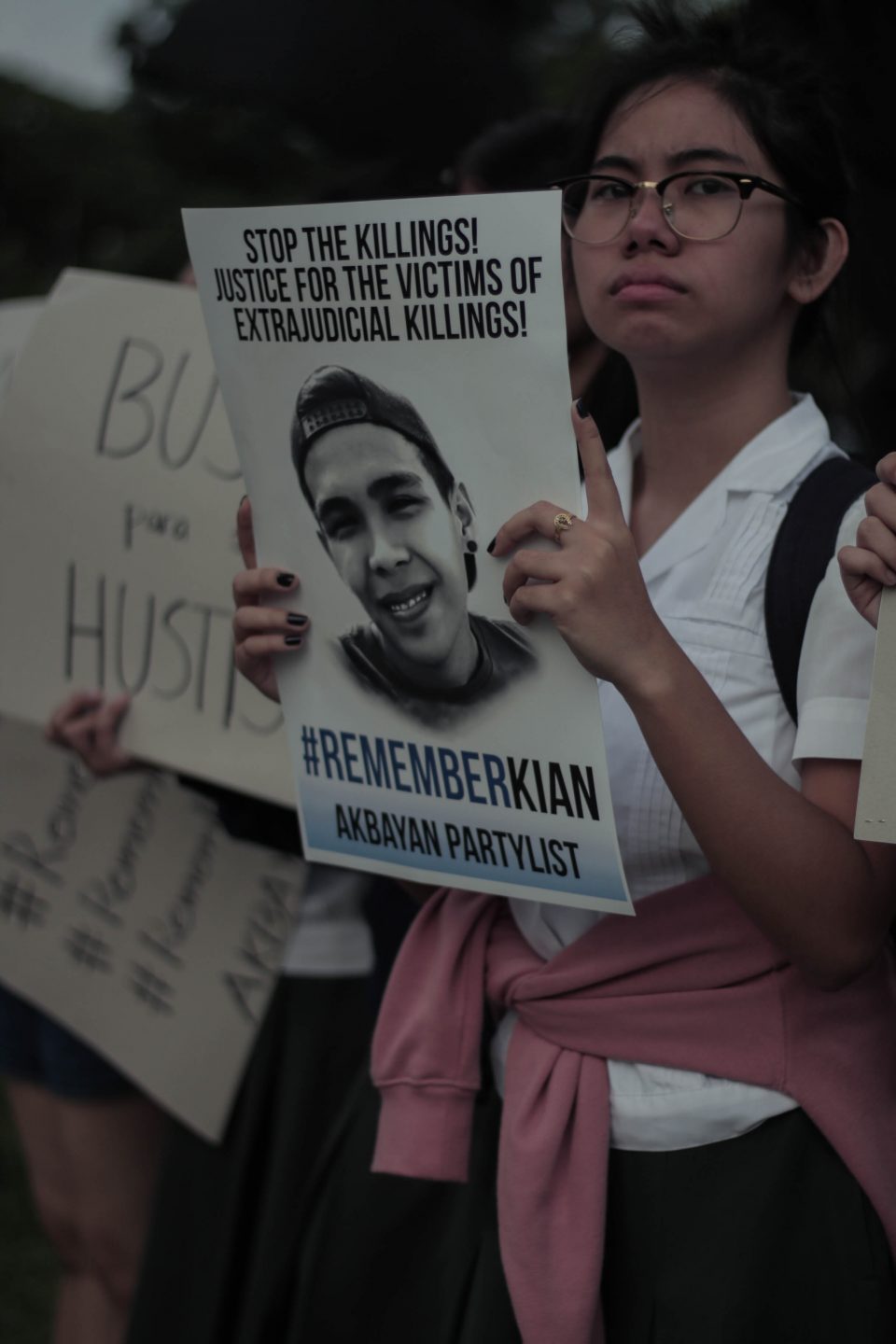 “What we’re doing here is giving back the lives that were taken away from them by this government.”

But no one dreamt to die to be a symbol of a movement like this. I’m pretty sure no kid has this life goal in mind. I asked this question to one of the protestors that day. JB Bejarin of Loyola Schools Sanggunian gave me a surprising answer. He didn’t give me a “for the revolution” response nor tried to justify why a young boy became a symbol of a grave war. Rather, he gave me an introspective response on the matter.

“I’m pretty sure no child or no teenager would want to be a symbol of such culture of violence. I’m pretty sure he had a lot of dreams for himself,” he bluntly responded. “I heard he dreamt to be a policeman and it’s so ironic na pinatay siya ng mga pulis [ng] Caloocan.”

“Who are [the ones] being killed?” Amber Quiban of UP Babaylan bounced a question back to me. “It’s the fathers, it’s the mothers, it’s the kids themselves. When they die we also have to consider that the welfare of the kids is also affected. Whoever is being victimized by this war on drugs, there’s always an effect on the kids and we are destroying that idea that the kids are the future of this nation. How will we have a future if we keep on attacking the kids and the welfare of the kids?”

She also raised the importance of people, especially the youth, coming together for someone like Kian. “I think it’s very, very important that all the youth should come to protests like this, to vigils like this. It’s more than just remembering a specific person. As I’ve mentioned earlier, these people were reduced by the government to just numbers. But now, what we’re doing here is giving back the lives that were taken away from them by this government. We’re giving them back the aspirations that could have been.” 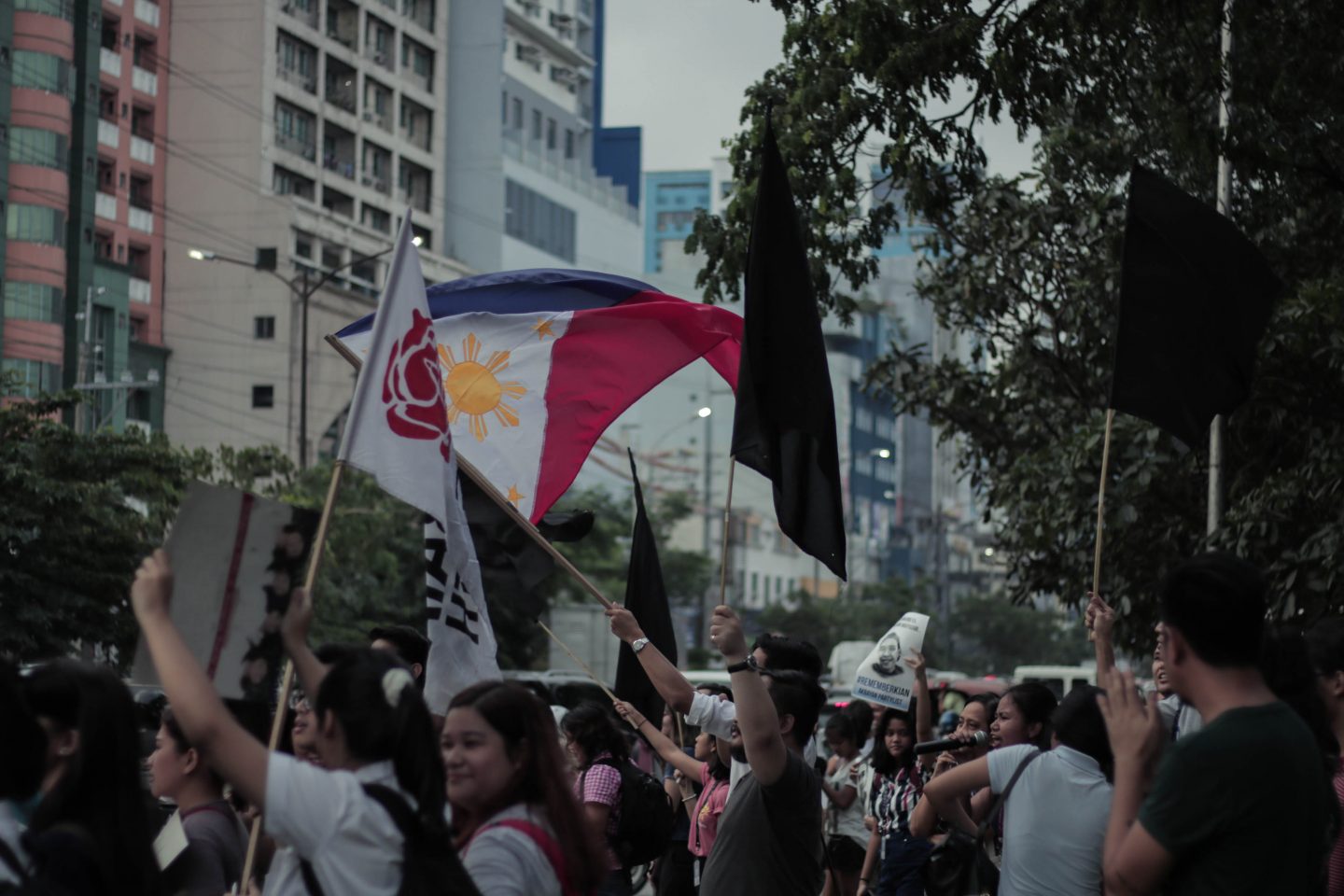 The revolution doesn’t look at your background or your economic status. What it does care about is your hunger and thirst for change.

The fight for justice lies beyond a tweet or a hashtag. We all need to remember that. There’s privilege in it that netizens like us cannot deny. That’s why I think protests powerful and all the more necessary still. It brings people from all walks of life together.

The younger generation continued the fight that the older generation started. No bickering over who’s the more superior generation, just guidance, and unity for one cause. The revolution doesn’t look at your background or your economic status. What it does care about is your hunger and thirst for change.

Read more: The rebellion behind SONA is the real state of the nation 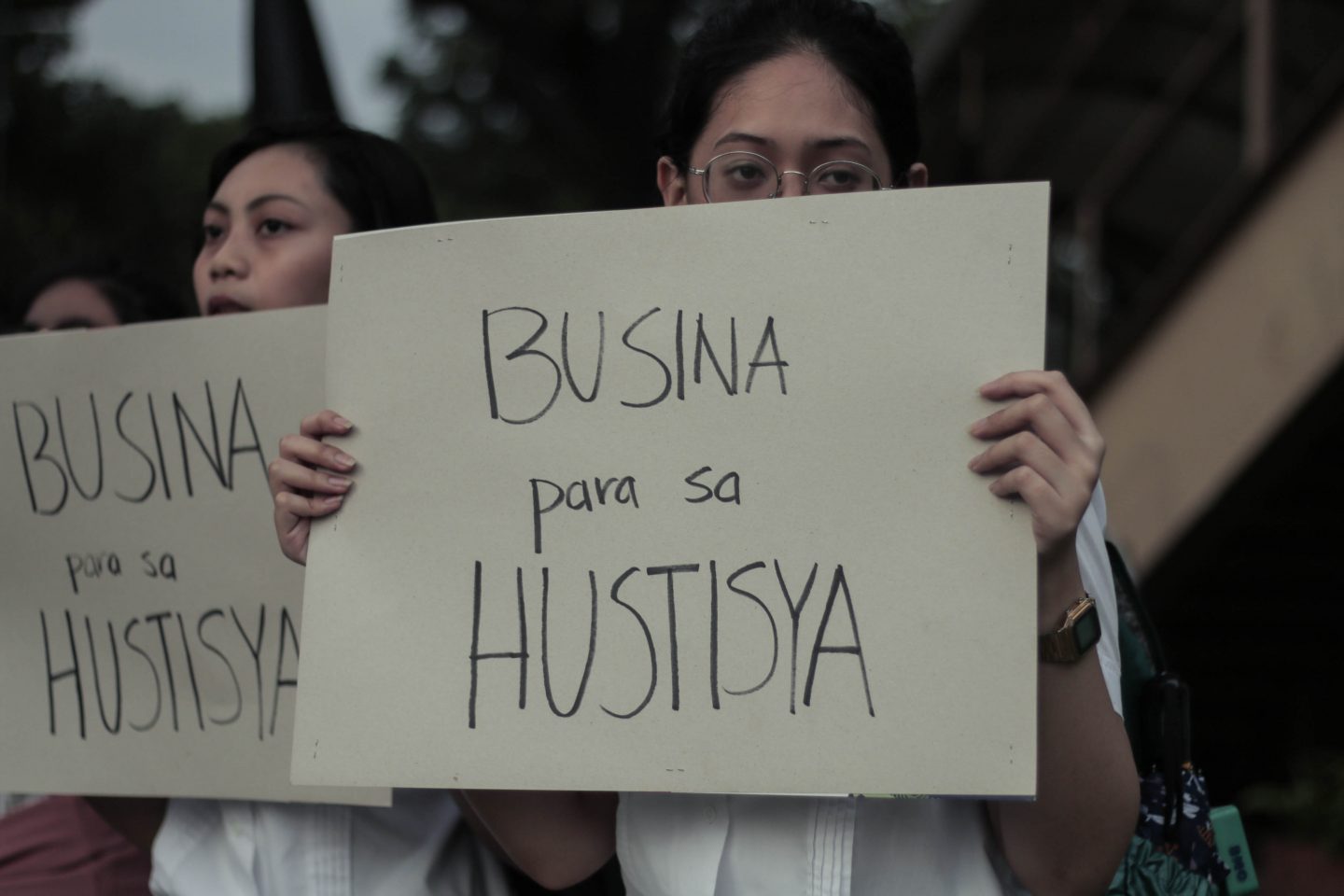 This is what happens when you take this digital rage for change to the streets. In a socio-political climate where being apathetic is the easy way out, protests keep the optimists in us alive and well.   “I know it’s very easy to be tired or be manhid on these issues, paulit-ulit na lang siya sa newspapers at paulit-ulit na lang siya sa social media. Sawang-sawa na rin ako na paulit-ulit pa rin yung sinisigaw ko, pero it’s a sacrifice for our country.”

What is the place of protests in the digital landscape? That’s the question that had plagued me during the first protest I’ve attended. But the protest also answered that for me. These fight for justice had not been rendered useless by hashtag activism. If anything, it made it all the more important for change to actually happen. Just by looking at these people fighting for a young boy they barely know is proof of that.

A year has passed since Kian died, but these protestors remember. They fight. And they do not let a cause as heavy as this only become a trend of yesteryear’s tweets.