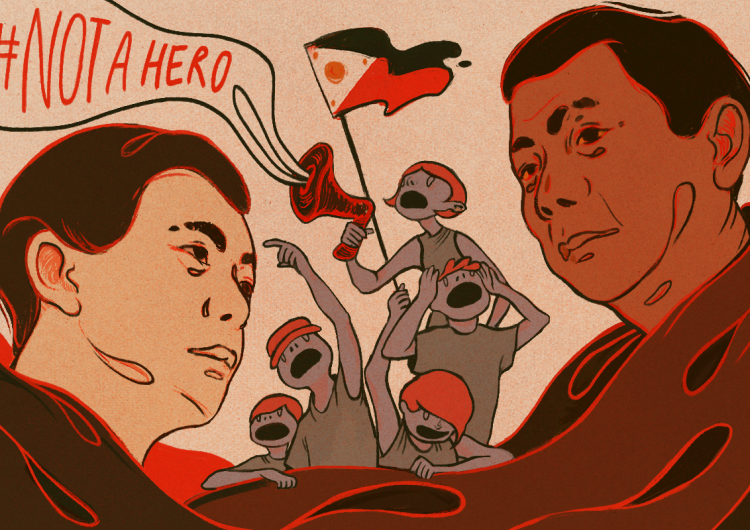 When I think of Imee Marcos, I always remember the 21-year-old student-activist Archimedes Trajano. He was a student of Mapúa Institute of Technology.

Archimedes—or “Archie” as he was known to his classmates—is remembered by history as the student who questioned Imee’s appointment as director of the Kabataang Baranggay in a forum on August 31, 1977.

Hours later, Archie’s body was found lifeless- beaten black and blue along a street in Manila. His parents were told he got into a fight with dorm mates. But it was easy to connect the dots.

While Archie is just one of the thousands who disappeared, imprisoned, tortured, even killed under the Marcos dictatorship, his murder remains a gruesome reminder of what the dictator and his family—including Imee—are capable of doing.

Had Archie been killed today, it would be much easier for the government to make an excuse.

I remember talking about Archie when I was asked to speak in a protest September 21 last year, the 45th anniversary of the declaration of martial law. But Archie was not the only one in my mind. I also remembered 17-year-old Kian Loyd Delos Santos, who was brutally murdered by the police just a month before.

Had Archie been killed today, it would be much easier for the government to make an excuse. His body would probably be found somewhere with the cardboard placard “pusher ako, ‘wag tularan” and no one would bat an eye.

One way or another, the events that marked martial law—rampant corruption, human rights violations, state violence—are making a comeback, and so are members of the Marcos family.

After she asked people to “move on” from the atrocities of her father’s dictatorship, our worst fears have been confirmed: Imee is running for the Senate in 2019. I am no longer shocked. With her “move on” statement, her brother’s electoral protest against Vice President Leni Robredo and the Kabataang Baranggay reunion at UP Diliman just days before Archie’s death anniversary, the Senate run announcement is just a blatant insult.

These are actions that spit on the memory of a young student who spoke against the Marcos dictatorship and whose bravery cost him his life. All this as the rest of us are already forgetting and repeating the same mistakes.

Read more: Martial Law History Is Being Changed On Wikipedia

George Orwell’s dystopian novel 1984 is the oft-used warning against the dangers of propaganda, forgetting and the manipulation of thought. Its continuing relevance speaks volumes about where we are heading as a society. It’s alarming: news reports mixed with disinformation and accusations of undue bias against legitimate media, all while the government leads the blatant effort to distort facts and revise history. The agenda is to make us forget how things were more than 40 years ago. So they can be reprised without scruples or hesitation.

We have a President who is a self-professed fanboy of the dictator. It was not a surprise that he gave Marcos a surprise hero’s burial and is even keen on following his footsteps.

Many survived to tell the harrowing tales of torture and abuse but some, like Archie, returned to their families as corpses. Some remain missing even to this day. Imee could make up a lie about how millennials have seemingly moved on from the past (or that she was “too young” to know of her father’s abuses). But I was a witness to how students quickly took to the streets to protest Marcos’s burial at the Libingan ng mga Bayani when the news broke out he was smuggled in.

Read more: A New Edition Of The Conjugal Dictatorship Is Getting Released This Month

In a time where fiction is being turned into reality and we are being trained to forget our bloody past, remembering is an act of defiance.

Thousands also marched to Luneta a few days later to insist that “Marcos, hindi bayani!” and remind everyone why the Marcoses should not be allowed to return to power. Even in social media, users and artists used hashtags and artwork during Marcos’s 100th birthday to post reminders of the dictator’s atrocities.
We have not moved on. We refuse to forget.

In a time where fiction is being turned into reality and we are being trained to forget our bloody past, remembering is an act of defiance. We may be young, but we remember the bravery of Archie, of Liliosa Hilao, of other young writers, students and activists who dared to defy tyranny and dictatorship. Their sacrifices should be examples for us to bravely fight the dictator rising in our midst.

Jose Rizal would say “Ang kabataan ang pag-asa ng bayan,” but more than that, it is high time for us to stand and say: “Kabataang makabayan, ngayon ay lumalaban!” We fight. We refuse to forget. We would not let history repeat itself.

SHARE“What the hell is a swap meet?” In my head, swap meets are...