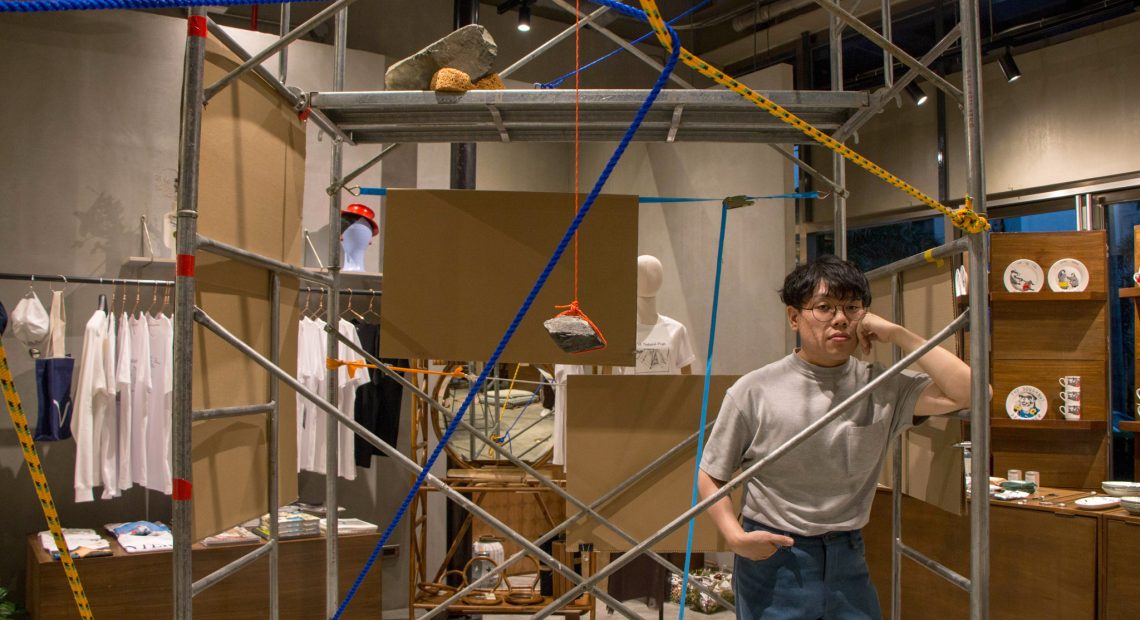 In between the rack of IDEA tees and a display of a Geoff Gonzalez dress at the eclectic retail space of Guava Sketches, a scaffolding has been erected. Several vibrant curios are found on different parts of the cold steel structure as if someone has been toiling here earlier. Numerous ropes are tied on the diagonal brace of the structure, a yellow microfiber towel hangs on the topmost rail, a rock rests on an orange sponge, a smaller rock hangs by a red rope, and another one secures a crumpled sheet of bubble wrap on the floor.

This is what it could have been like should Guava Sketches be under renovation, but this is a carefully assembled scene for photographer Koji Arboleda’s exhibit titled “Mapping Happiness.” 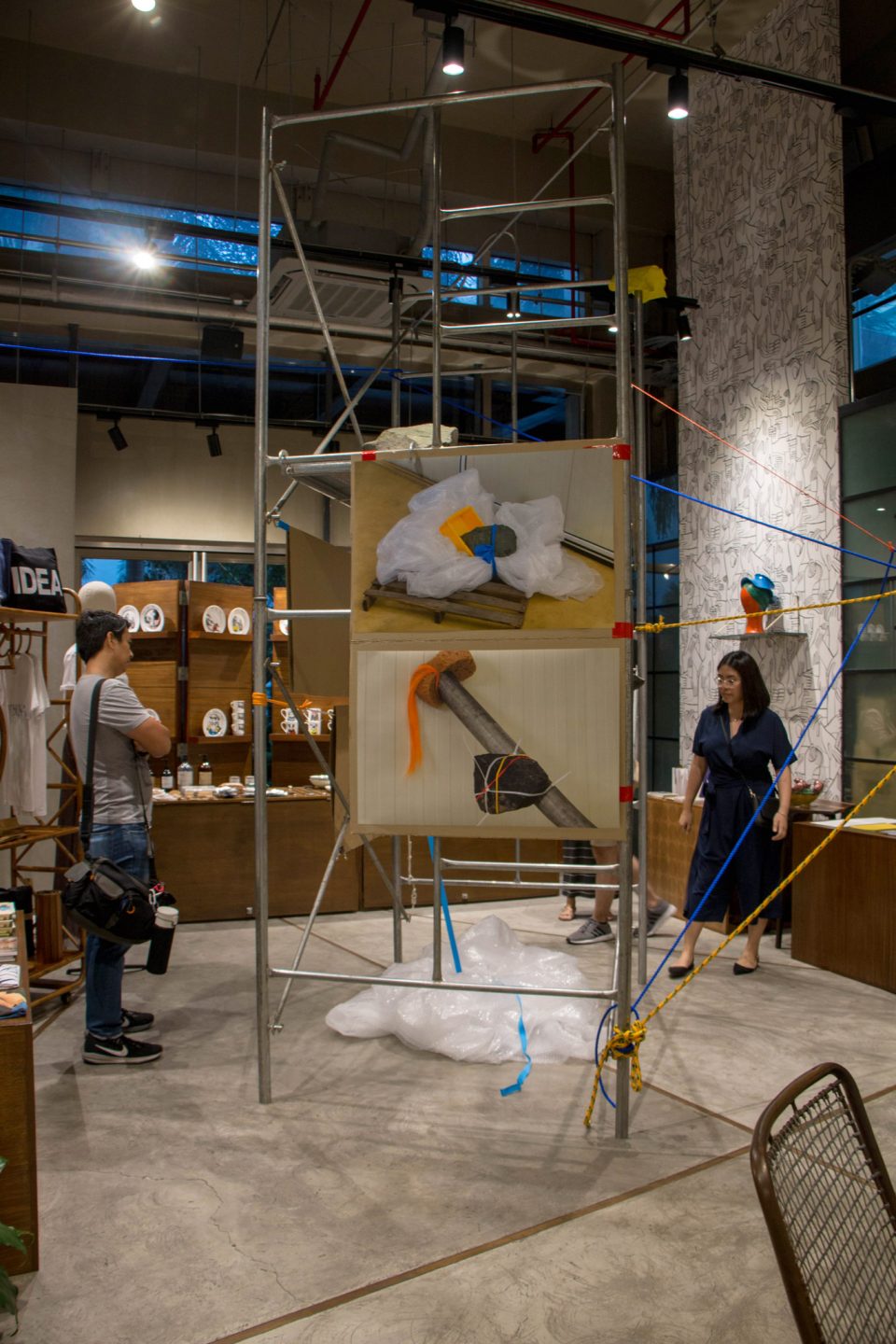 Koji lays a cardboard on the table near the installation. As gentle as he could, he removes the top layer, revealing one of the five prints for the show. He grabs the two ends of the photographs and secures it on another cardboard attached to the scaffolding.

Koji has always been popular for his fixation—or affection even—towards the human emotion. He is known for his masterful use of color in neat yet often quirky portraits. Think of the SCOUT covers he shot along with his Carl Jan Cruz campaigns. These signature attributes are still present in the photographs he presents in “Mapping Happiness,” but the lensman veers away from his familiar muse. Instead of putting another human in front of his camera, Koji takes mundane articles as his cast of characters for the photographs in this exhibit. 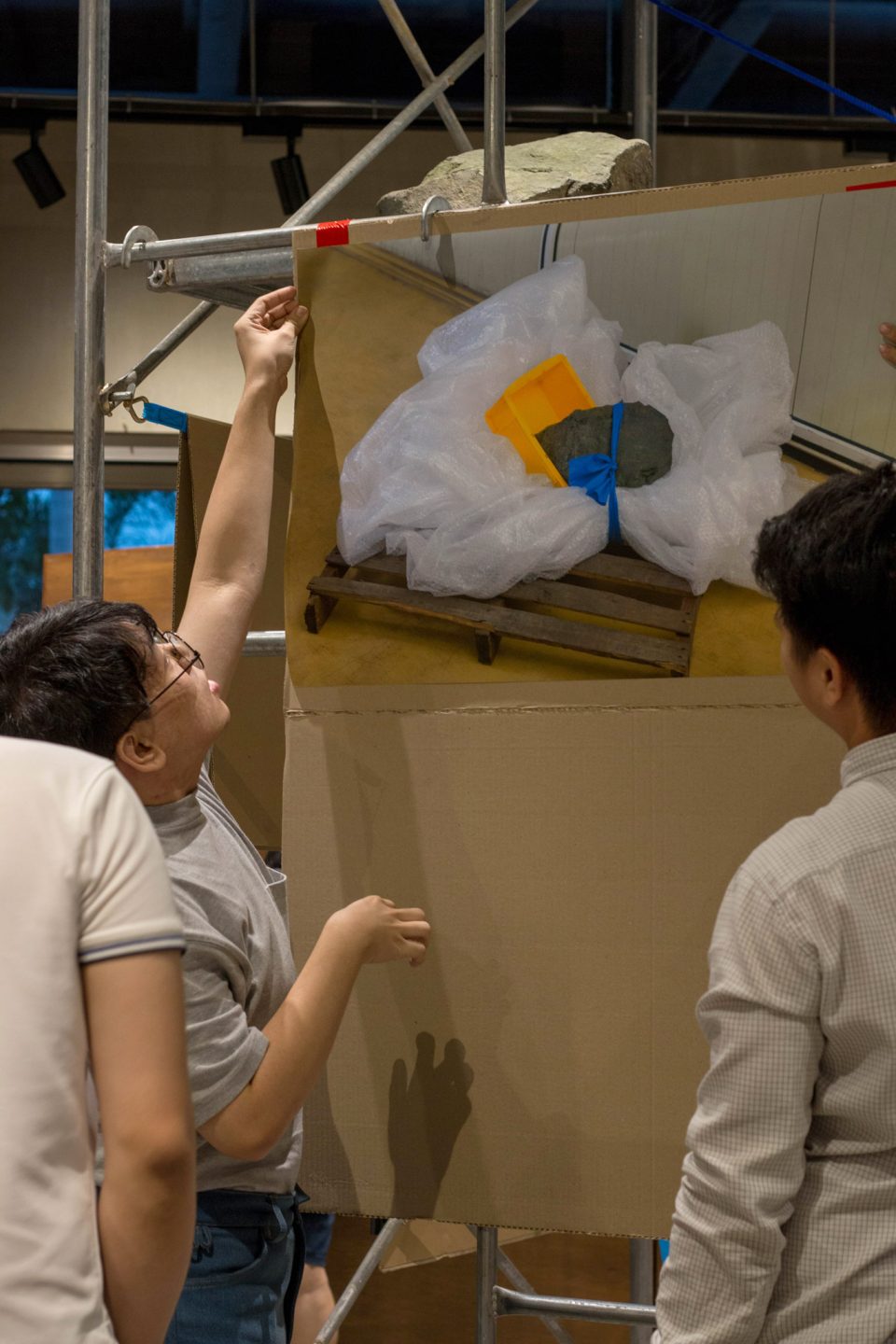 When the exhibition date was finalized, Koji knew right there and then that he wanted to work with objects. “Since I started doing product photography, I’ve enjoyed playing with objects and how they interact with each other,” he says. “Sobrang gusto ko ‘yung idea na I play with space, ‘yung locations nila sa shot and frame.”

Earlier this year, Koji also gave us a glimpse of his visual fantasies. With Thea de Rivera and Gab Bustos of 12/10, he deconstructed dishes from the restaurant and translated them into exquisite visuals done in Koji’s signature aesthetics. This creative pursuit further fueled his desire to photograph objects for this exhibit. 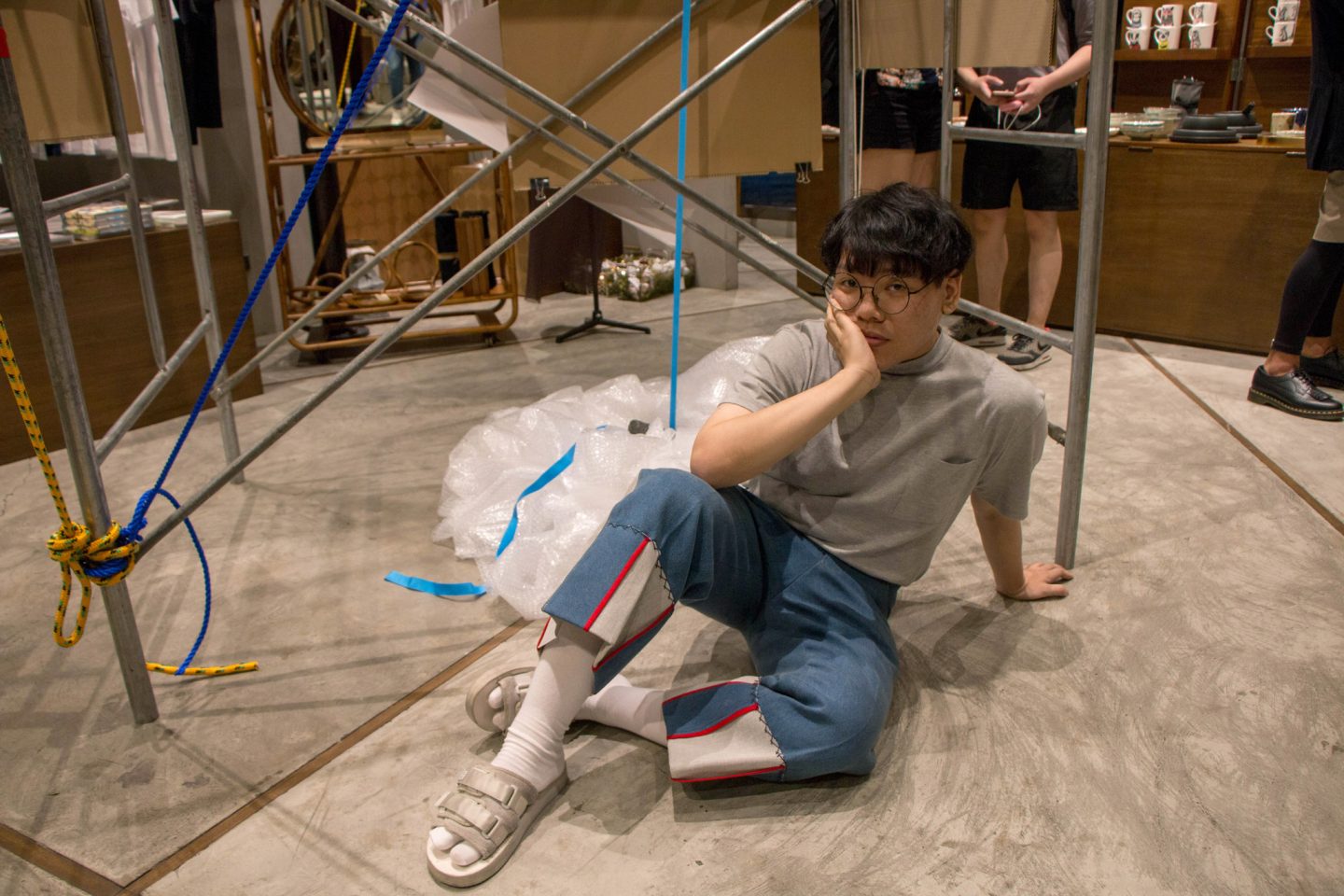 In “Mapping Happiness,” Koji contemplates on the form of rocks, lifts them off the ground, and puts them in the most unlikely position. For example, the largest rock feature in the exhibit is cradled by three ropes as it rests tenderly on the tip of a blue fish crate. Another photograph resembles the same display beneath the scaffolding: A rock and a yellow fish crate rest on a mountain of bubble wrap as all these elements are tied with a blue ribbon. 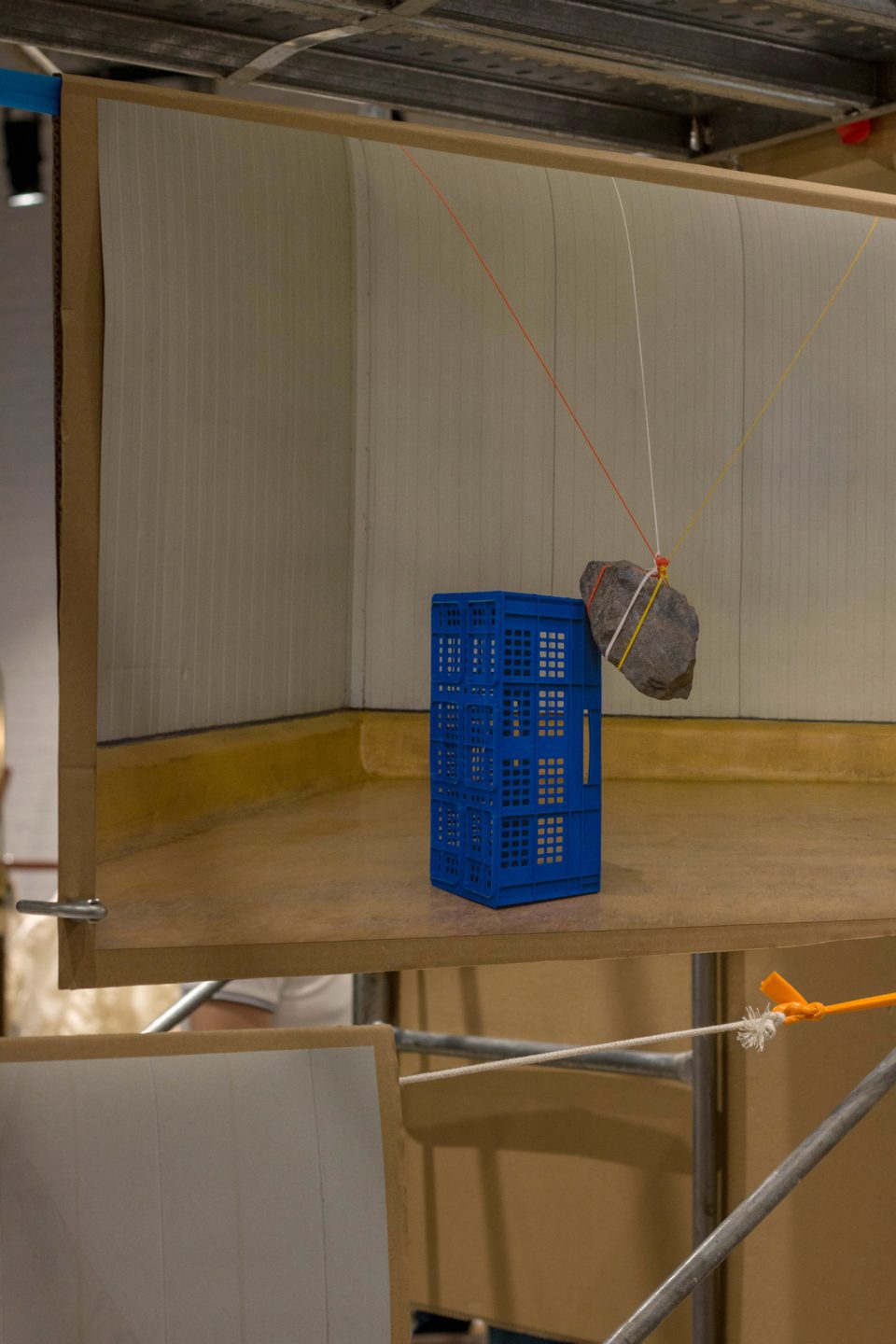 In a sense, some of the photographs could have been incidental. Take the steel tube adorned with an orange wig falling on a wet sponge for example. This scene could have easily been photographed at a sidewalk car wash at the right moment. The bubble wrap photograph, on the other hand, could have been captured during the unboxing of a new appliance. These photographs, however, are all planned out.

Koji took time to search for the objects featured in this exhibit. “[They’re] not found objects;  I feel I’m in full control. It’s all about finding things that are pleasing to me,” he says. More so, the placement of each object are thoroughly thought out. “Na-enjoy ko ‘yung installation siya pero instead of being live there, ako lang ‘yung nakakuha nito noong time na ‘yun.”

As usual, Koji explores color and balance in these photographs. Unlike portraits, however, Koji admits that his shoot for this exhibit tested his patience.

I always get fixated on one visual in my head, and it’s just me trying to perfect that shot. It’s just me tweaking [the placement] until I see na tama na ‘yung balance ng everything.

“Hindi siya katulad ng tao na pwede mong sabihan kung anong dapat gawin,” he says. “Ever since [I started taking photographs], I always get fixated on one visual in my head, and it’s just me trying to perfect that shot. It’s just me tweaking [the placement] until I see na tama na ‘yung balance ng everything. Like, gusto ko na sakto ‘yung bagsak ng crease (referring to the bubble wrap).”

At its core, “Mapping Happiness” could be Koji’s most personal work yet. As much as Koji is the lensman, he takes himself away from his comfort zone and somewhat unravels his most personal ideas, making him somewhat the subject of this presentation. There’s no trace of him, but every image is a product of a careful formation of miscellany to translate his vision into something tangible. 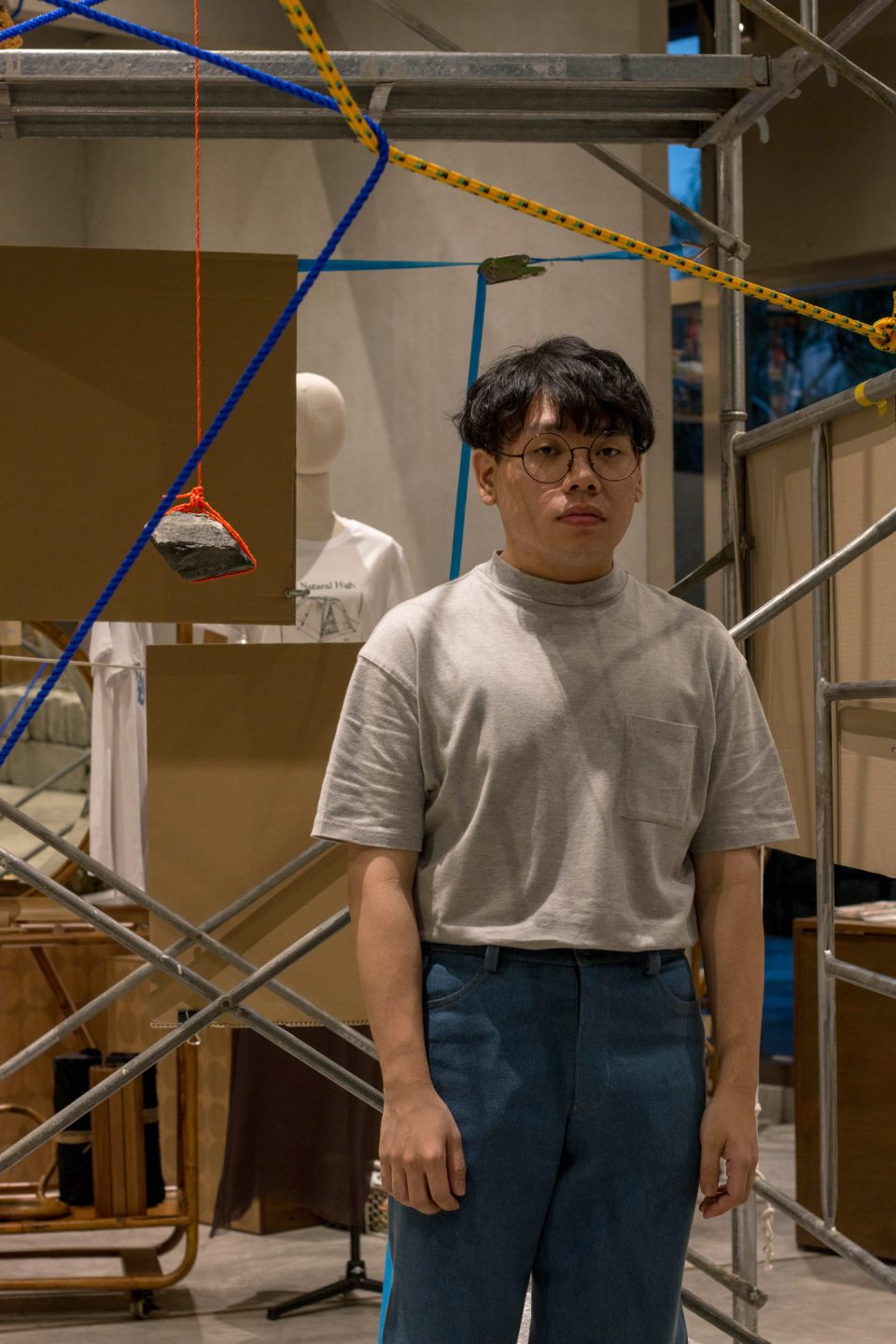 Koji is ready for new things. Recently, he helped style the characters for Whammy Alcazaren’s Never Tear Us Apart. Soon, he wants to further explore the possibilities in the territory of object photography. But right now, he is in control in “Mapping Happiness.” And true to the title of his exhibit, he is happy with this control. “I love the control kaya SZA ako,” Koji quips.

“Mapping Happiness” opened on Oct. 20 and will be on view until Nov. 20 at Guava Sketches in Greenbelt 3.

SHAREAs the pandemic continues to plague our lives, businesses struggle to survive and...

SHAREAs far as I can remember, I’ve always wanted to be an anime...