If you want to argue with your friends that memes could be or already are art, here’s your evidence. 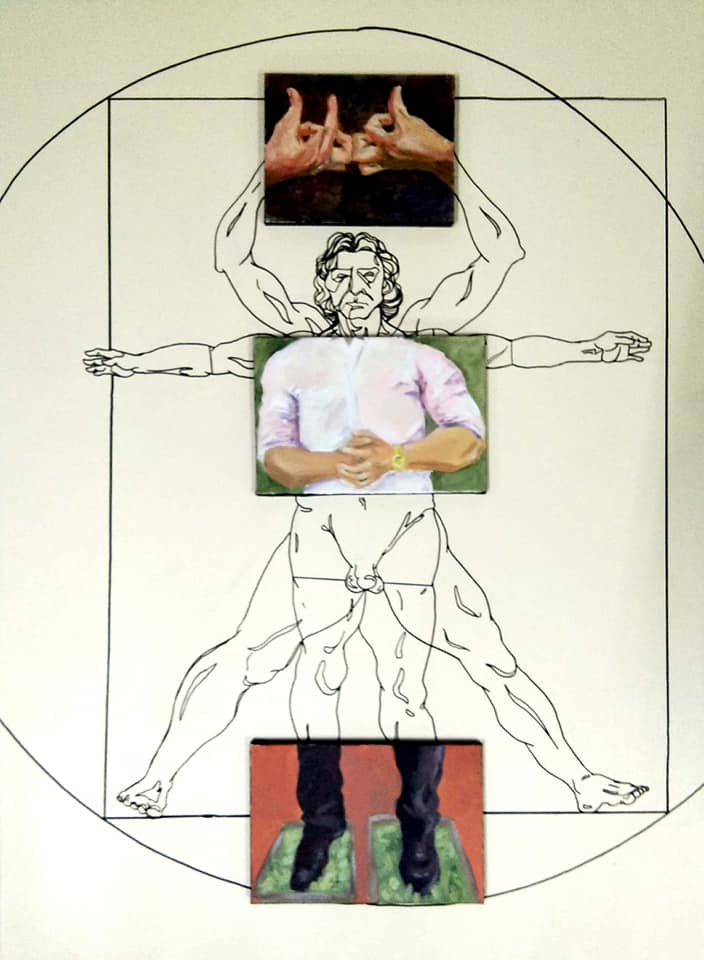 “‘yeet’ was the choice for the exhibit since it really represented what my exhibit is, which was the evolution of memes and how it’s so freeform that you can use it for anything.”

His pieces include “Non-aesthetic Vitruvian Man.” It’s a crude sketch homage to Da Vinci’s iconic work—but with the man’s hands, arms, and feet showing off the Blood hand sign, the “You Know I Had To Do It To ‘Em” iconic hand clasp, and if we’re not mistaken, the Burger King foot lettuce from years past. Deep cuts.

Other pieces are “Pope a Cap” (literally the Pope popping a cap), “Cursed Hands” (a man looking at a hand with extra appendage), and “Loss In the City” (a play on “lost in the city” using images reminiscent of the famous Ctrl+Alt+Del comic strip that became a meme format reiterating the “is this loss? meme.)

Read more: Our Favorite Memeposting Groups, In No Particular Order

We reached out to Earnest about his thesis exhibit, where memes stand in postmodern art, and what the future of memes has in store for shitposters alike.

Out of all meme catchphrases, why name your exhibit “yeet?”
I named it “yeet” since it represents some form of connection with the shitposting culture that we have. There are people that go: “yeet yate yote” as a parody to “live laugh love.” There’s also the idea of replacing every verb [with yeet], like “oh I yeet my meat” or “I yeeted a trashcan.” In my case, “I once yeeted a watermelon.”

“yeet” was the choice for the exhibit since it really represented what my exhibit is, which was the evolution of memes and how it’s so freeform that you can use it for anything. You can interpret it in anyway possible. That’s how it all started. 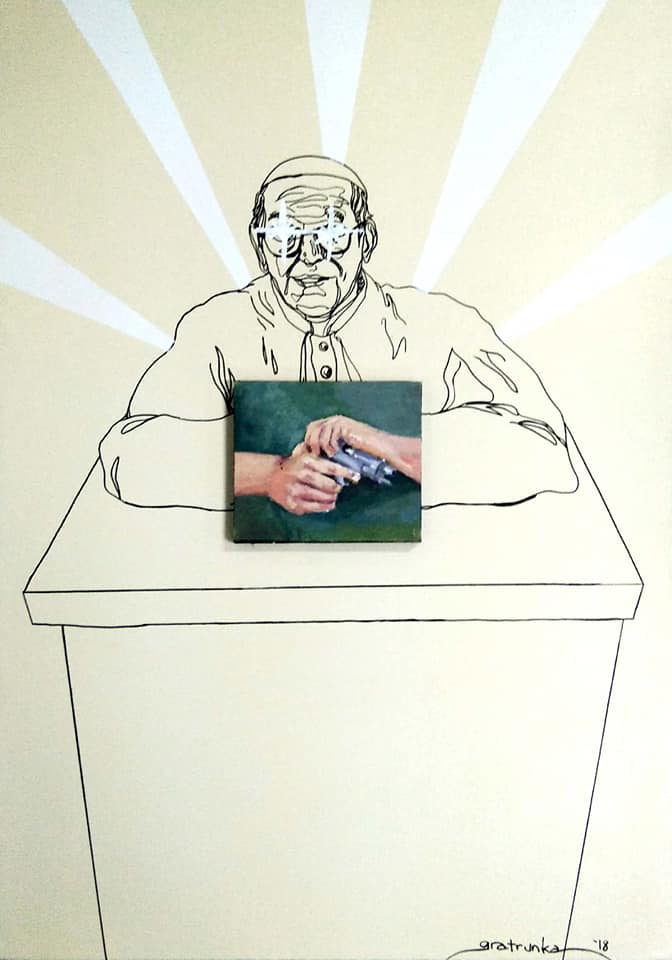 “I really wanted to find a way to talk about memes, that at one point they can become art or are art as of now.”

What motivated you to focus on meme culture in this exhibit?
To be honest, this exhibit was my thesis actually. It’s supposedly a solo exhibit. But I really wanted to find a way to talk about memes, that at one point they can become art or are art as of now.

A few shitposter friends of mine, who have the same sense of humor as me, tended to talk about how memes evolved from merely just a communication tool to something else. Well it’s still a communication tool; but incredibly obscure and mostly inside jokes, niche humor, and millenial humor. A lot if it is nonsensical.

It’s not a normal thing to talk about. Memes are classified in different ways. There are like the usual communicative Twitter memes, which are incredibly relatable. But what I’m talking about are the ones that you need at least five years of experience in the Internet to understand the context of everything, the subtleties of it all.

That’s what motivated me. I just saw the connection between art and memes, so I decided I’ll make it.

Personally, where do you think memes stand in modern art?
There’s no definition yet, to be honest. But I have parallels about it. My thesis adviser Dr. Paul Grantn discussed how it’s similar to situationist artists. It’s also similar to pop art, dadaism, in a way that memes and these movements are very contextual.

It’s free form. Once again, it’s similar to modern art, postmodern art even. While doing research, since this was a thesis, I was reading up on similar exhibits. For example; Massie Post’s “What do you meme?” exhibit back in 2016, where she discussed how [memes] are similar to folk art also.

Also, there is The Philosopher’s Meme, a website that did manifestos and meme analysis. They also discussed parallels of how the “Loss” meme is similar to Wassily Kadinsky’s “Simplification of Dancer.”

There’s a lot of parallels from previous art movements that do apply to memes right now. Where memes stand now is merely at the door, a door that someone else has to open in order for it to be recognized as art.

How did people react so far towards your “yeet” exhibit? Did anyone question the validity of memes in a gallery setting?
My thesis panel actually questioned the validity of it. They were questioning it in a way that they don’t think my art is in the line of memes. But my thesis adviser, in one of the panels, do acknowledge the “memeness” of it all.

I don’t really mind that ‘cause if you think about it, a lot of shitposting meme groups like 4Chan or Reddit discuss memes and they always argue about it all. It doesn’t really matter at one point. But then, the validity of it all they did question that. Although, they understood how I talked about the parallels [between memes and postmodern art.] 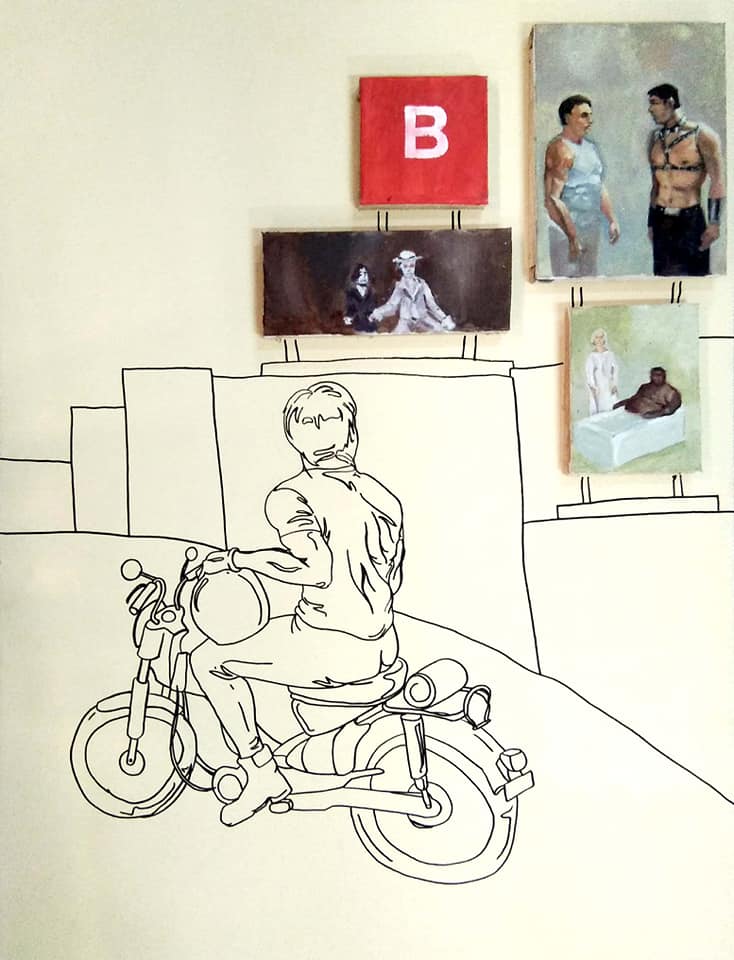 “Where memes stand now is merely at the door. A door that someone else has to open in order for it to be recognized as art.”

What is the future of “meme culture” and “shitposting groups” for you?
I don’t really like to talk about what the future could really hold, y’know? I really do think that I would like to live in the moment. New memes will come and go or new ways to shitpost will come and go. All we have to do is get ready and adapt to it as soon as possible.

Humor is adaptive. A person’s sense of humor just evolves. With meme culture and shitposting it’s all amazing because the simplest forms of things just makes you laugh. It does show the adaptability of these people [who meme and shitposts]. There’s no worries for the future. It would be just people standing for what’s going to come next. You don’t really have vision for it. There’s no vision whatsoever.

View his digital gallery below:

SHAREWhat better way to end your summer than see your favorite bands in...