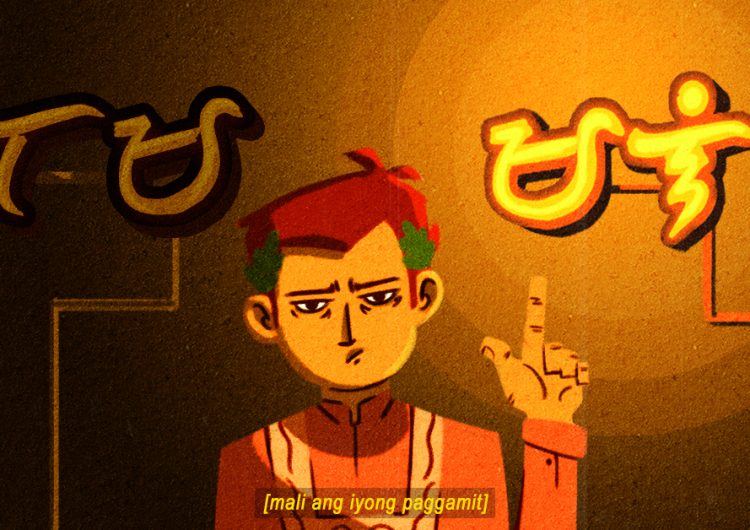 Planning to get a Baybayin tattoo? Before you engrave that Google Translate version onto your skin for the rest of eternity, maybe hold off til you’ve seen @baybayin on Instagram first.

The account is run by Kristian Kabuay, a self-taught artist and speaker on our ancient native script. He’s spent his college years teaching himself Baybayin, did talks at prestigious universities like Stanford and Harvard, has toured his Baybayin calligraphy art around Europe and even developed his own performance style of Baybayin called Tulang Kalis. In other words, he’s pretty legit.

Kristian has hawk eyes for Baybayin errors and apparently, there’s a lot. Here’s a rundown of the top mistakes real people have made with their Baybayin tattoo designs, as pointed out by Kristian in hilarious IG story format:

Don’t forget, ladies and gents: Baybayin is nothing like the Roman alphabet that we know. The characters represent full syllables, so translating each letter shouldn’t be necessary. If the six-word phrase you’re converting is starting to reach three lines in Baybayin, you need to double-check your work. 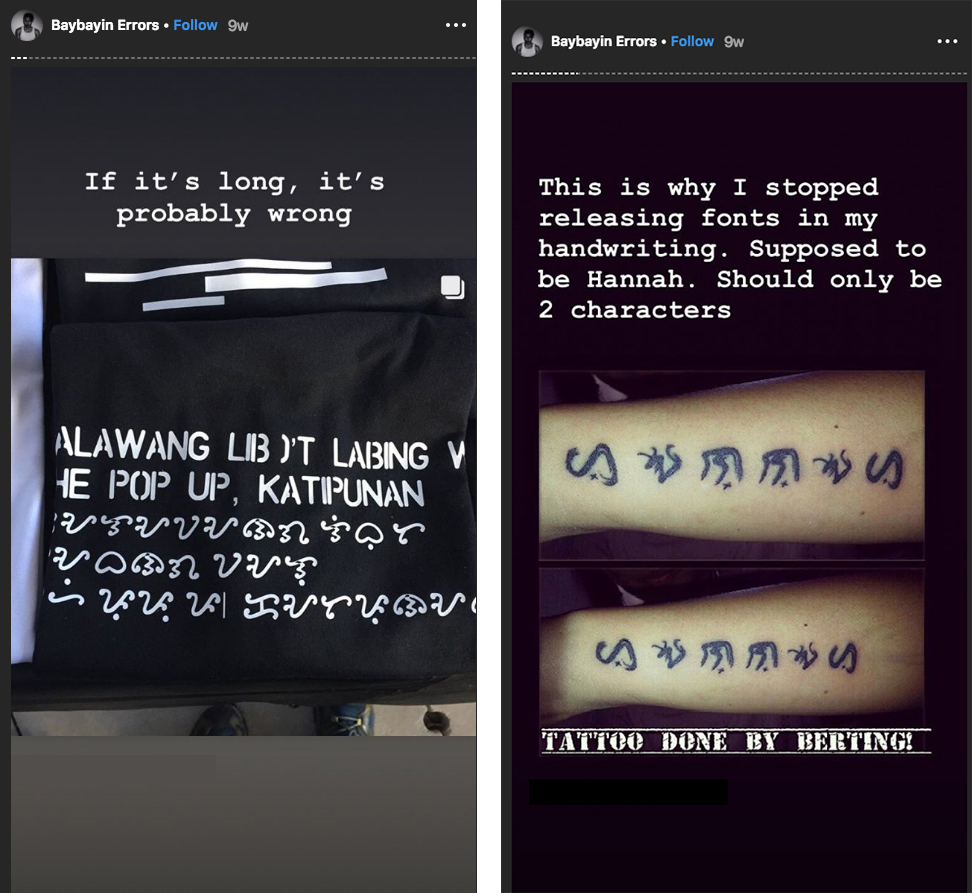 FYI, Alibata is not Baybayin

The term Alibata actually came from a Spanish scholar named Paulo Verzosa way back in 1921, probably patterned after the Spanish El Alfabeto but with the Arabic letters alif and bata.

Okay so the term is wrong, but what’s the big deal, you ask? Well, Alibata is a misnomer that means alphabet, which Baybayin is not. It’s an alphasyllabary, which means that characters represent consonant-vowel syllables. Since we might view it as an alphabet, we could end up using characters the same way we use Roman letters. Remember, if it’s long, it’s probably wrong. 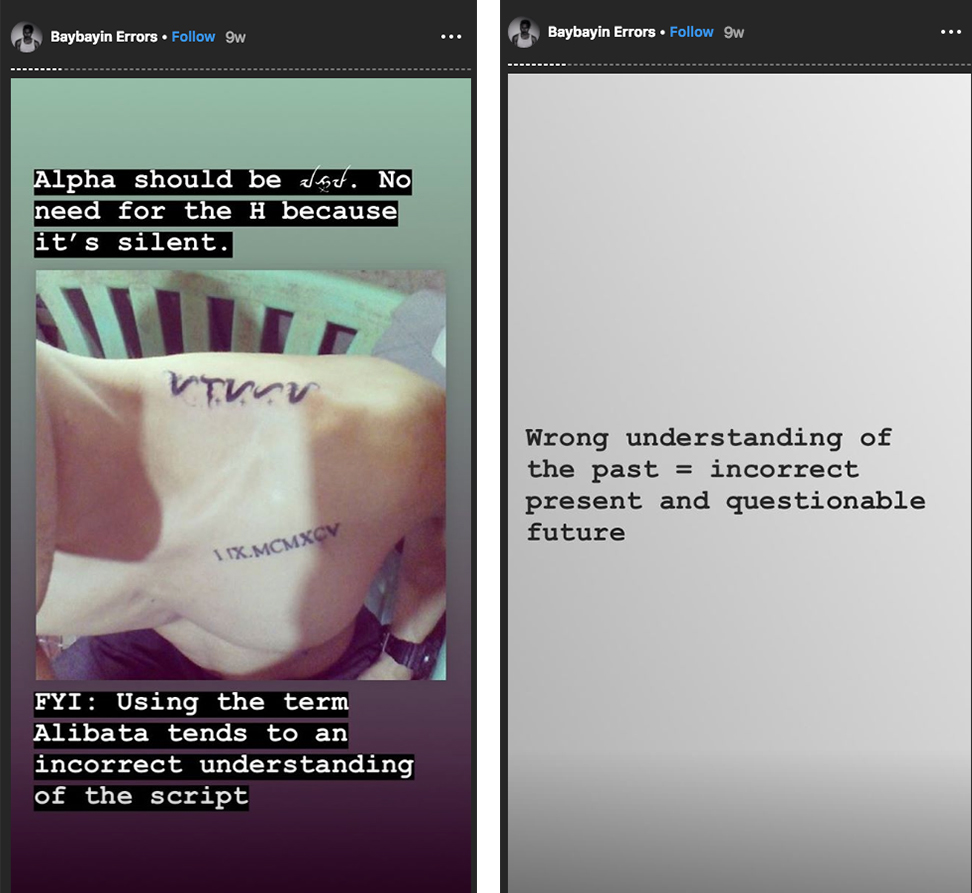 A common mistake according to Kristian’s series is canceling vowels. If you’re wondering how to use the consonants in a Baybayin character without the vowel, all you have to do is add a kudlit to cancel it out. Also, if in one character you cancel a vowel, you don’t need to add it in again with another character. Baybayin is short and sweet and doesn’t have to be complicated. 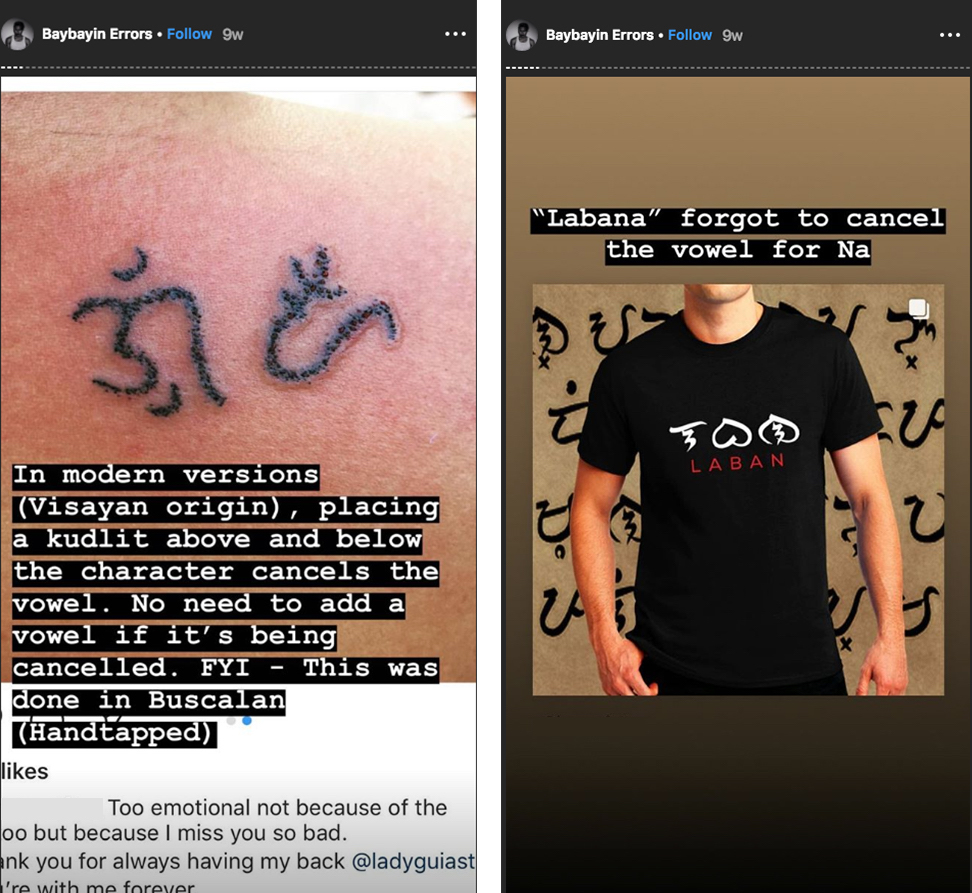 Make sure the symbol is actually Baybayin

This one is just… a head-scratcher. Double check your stuff, guys. Especially if it’s going to be on your skin forever. 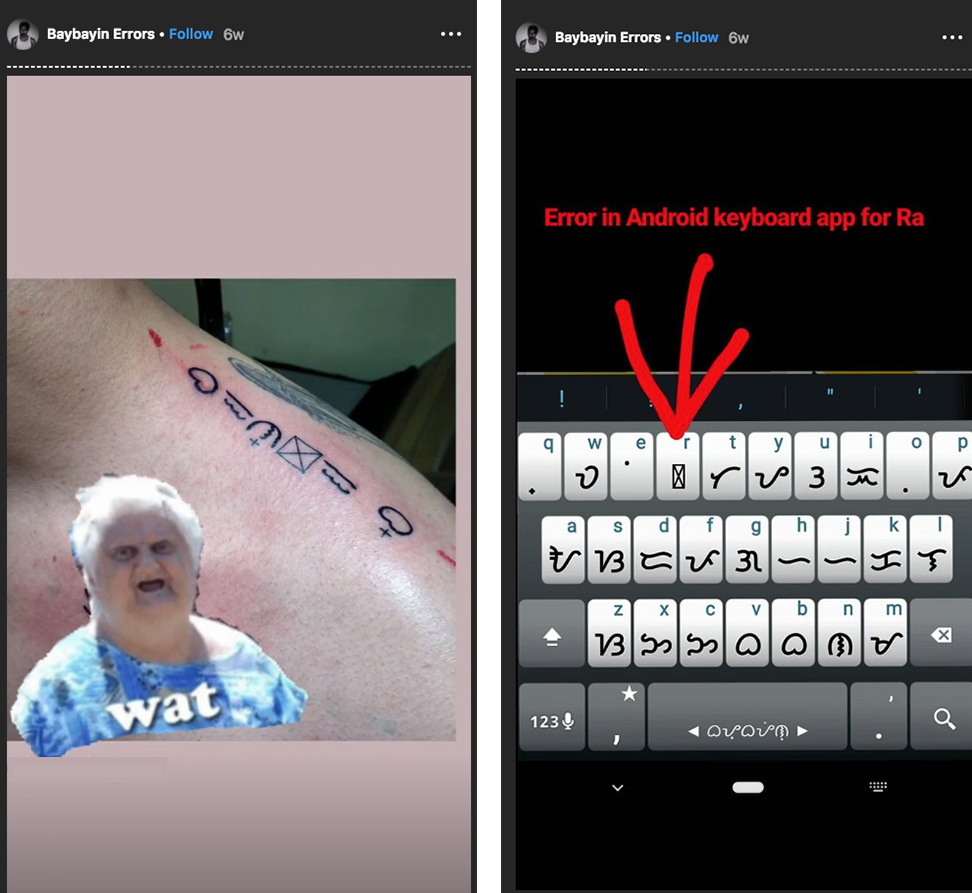 Wanna know more? Here’s our interview with Kristian to talk more about the beginnings of his work,as well as his thoughts on Baybayin today.

How did you get started studying Baybayin?

I started when I learned that the Ka character on the Katipunan flag was not a capital I. It started with a chart in the book and then early websites and correspondence with Hector Santos and Paul Morrow where I learned the history.

Why choose the graffiti style in your Baybayin works? Was there any specific inspiration behind it?
It was the first artistic writing style I was into as a kid.

Since you’re based in the US, what’s it like talking about Baybayin to a largely Western audience?
What is “Western?” I assume that it’s either non-Filipinos or Filipino-Americans. When I first started doing this publicly, not many Filipinos knew about it. Since then, awareness has grown. The most common comment is “I didn’t know Filipinos/we had a writing system.” Having to explain the writing system is a similar experience explaining ourselves. Not many know about the Philippines as a people or even geographically, so what more the food, cultural practices, martial arts, dance, textiles, etc. I must say that the Fil-Am community I work with are more [culturally informed] than those I was exposed when living in the Philippines. Just because they don’t speak a certain language or have a different passport, it doesn’t make them any less “Filipino.”

What do you think keeps Baybayin “alive?” It’s been tagged as an extinct writing form, but there are artists like you creating your own style like Tulang Kalis.
I play both sides of the scripts being alive and dead. I’ve promoted both at the same time. What keeps it alive is the yearning for identity. Cultural identification means different things depending on the context of the person but at its core, it’s filling a hole.

What is one thing you want Filipinos, and the youth in particular, to pick up from your works?
My art is only a catalyst for cultural realization and change. If you go beyond the “pogi points” of the art, clothing, tattoos, etc, you will start to realize how much more you don’t know about culture in general from a micro and macro perspective. Ideally, I’d want the youth to decolonize and do better than me but until then, bring it on.

PS: I do realize when I mention the term “decolonize,” some people will roll their eyes and have an unoriginal comment like “Why you speaking English” or “You don’t even live in the Philippines.” Decolonization isn’t black and white and is an ongoing process. I look at it more of a mental state rather than something that manifests in language, geographic or a shirt that says ‘I Love Adobo.’

SHAREJoel Casimiro, virtual reality artist, has dropped a teaser for an upcoming short....

SHAREIf our grandparents had whispers of folktales growing up, big city kids have...