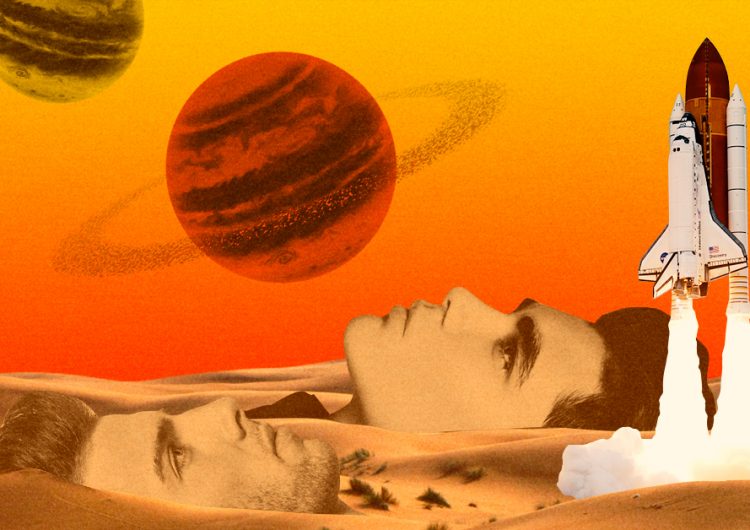 Happy new year, friends! The post-holidaze month is upon us, and at this point in time there’s probably a large chunk of the population who still haven’t gotten their heads out of the holiday funk (myself included). Now staying home in a leftovers-induced food coma won’t help you out of that zombie state, so we’ve rounded up some cool functions happening this month that’ll get you up and off your couch. Thank us later. 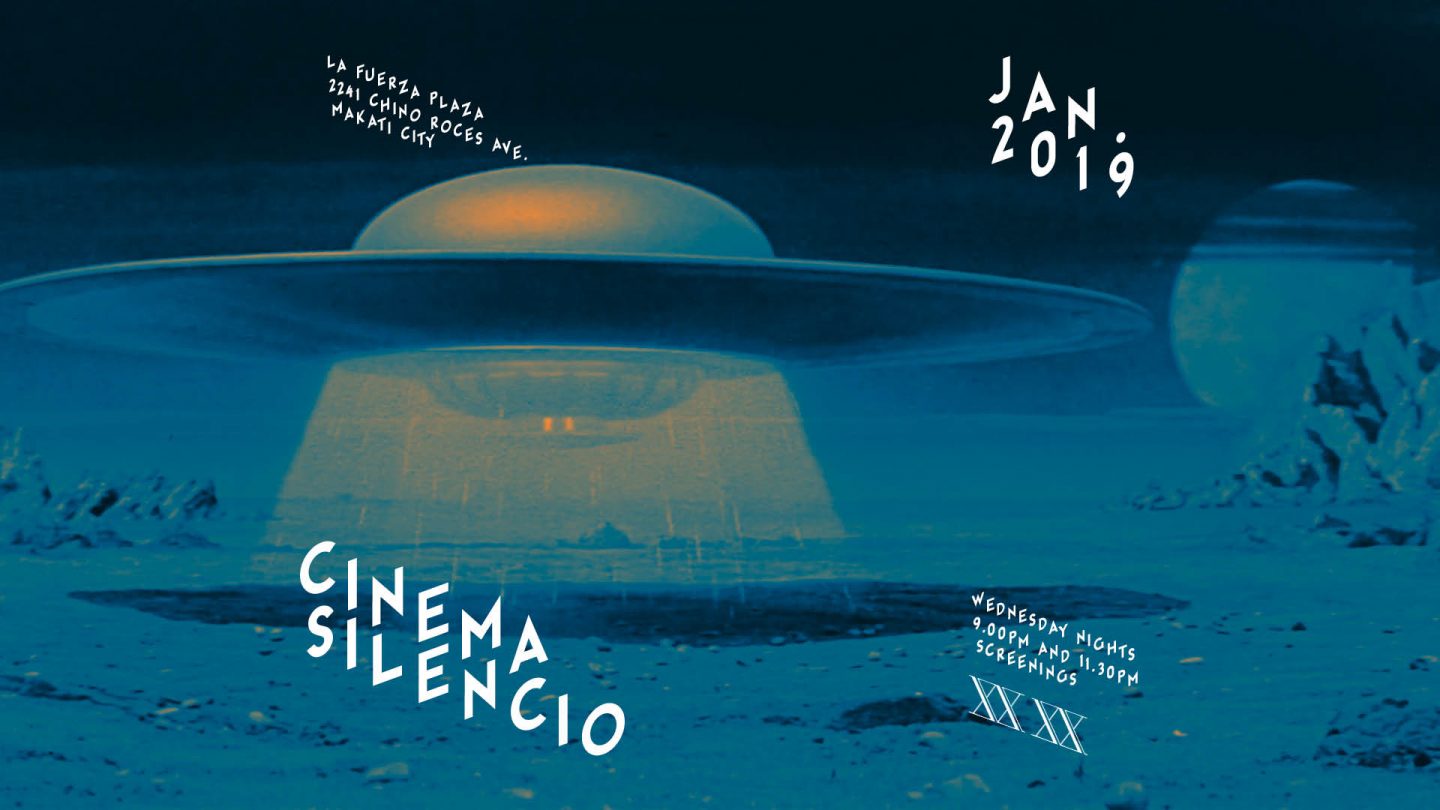 Aliens! Dystopia! Psychic powers! If any of these pique your interest, then you should head over to Cinema Silencio at XX XX this month. The weekly film screenings happen every Wednesday, with two films a night along with a musical act to transition between films. The theme, if you still haven’t guessed it, is sci-fi, and features cult classics like Barbarella (1968), The Day The Earth Stood Still (1951), and The Man Who Fell to Earth (1976). Check out the full lineup of films here. 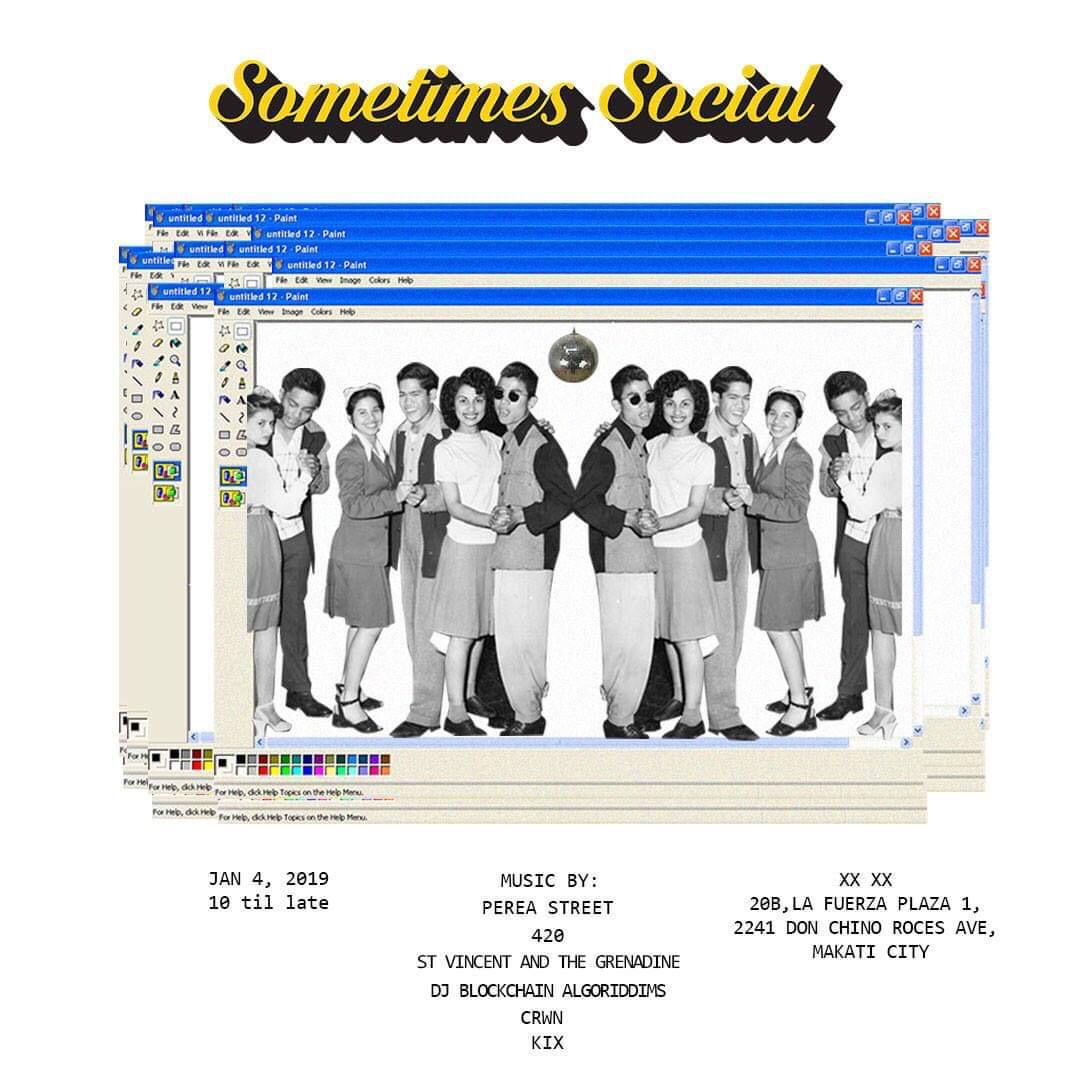 Sometimes Social has imported his hangout parties from Tokyo all the way here to his hometown of Manila. After weeks of a whole bunch of fun nights, tonight marks his last shindig. If I were you, I’d put my dancing shoes on and head over to XX XX as soon as those doors open.  Performances from Perea Street, 420, St Vincent and the Grenadine, DJ Blockchain Algoriddims, CRWN, and Kix are also lined up, so grab a beer and get grooving.

So Worth It! The Yellow Cab Pizza Tour (Jan 5) 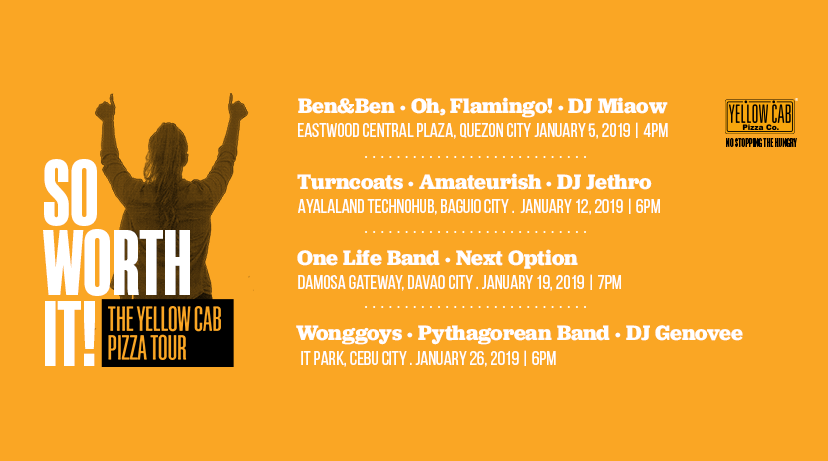 I know, I know. Everyone’s cutting back on food to make up for the past month’s gluttony. But come on, pizza? Awesome performers? Free entrance? Pretty hard to say no to. Yellow Cab’s So Worth It pizza tour is happening all around the country, so if you’re anywhere nearby the venues, then come through and bring your friends. We’ll be putting our food cut on hold for a night because Yellow Cab is right: There’s no stopping the hungry. 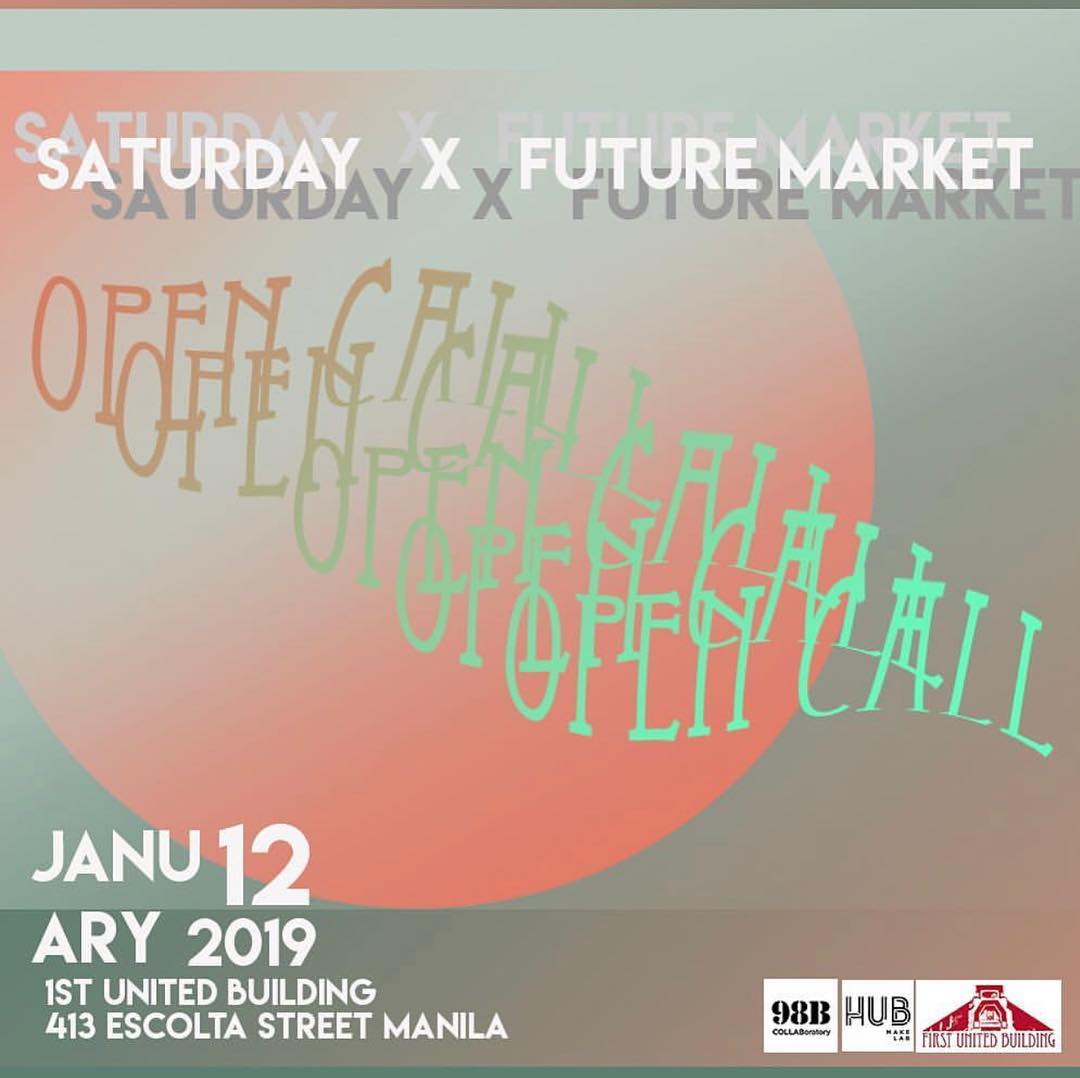 Attention, hoarders: Here’s your chance to start fresh and let some things go. The first Saturday x Future Market is set to happen next weekend, and whether you’re a buyer or a seller, it’s definitely going to be a fun place to look around for unique knick-knacks and doodads to bring into or pass on to others for the new year. Future Market is happening at 98B’s space down Escolta. Tune in for more details or find the vendor’s application link here. 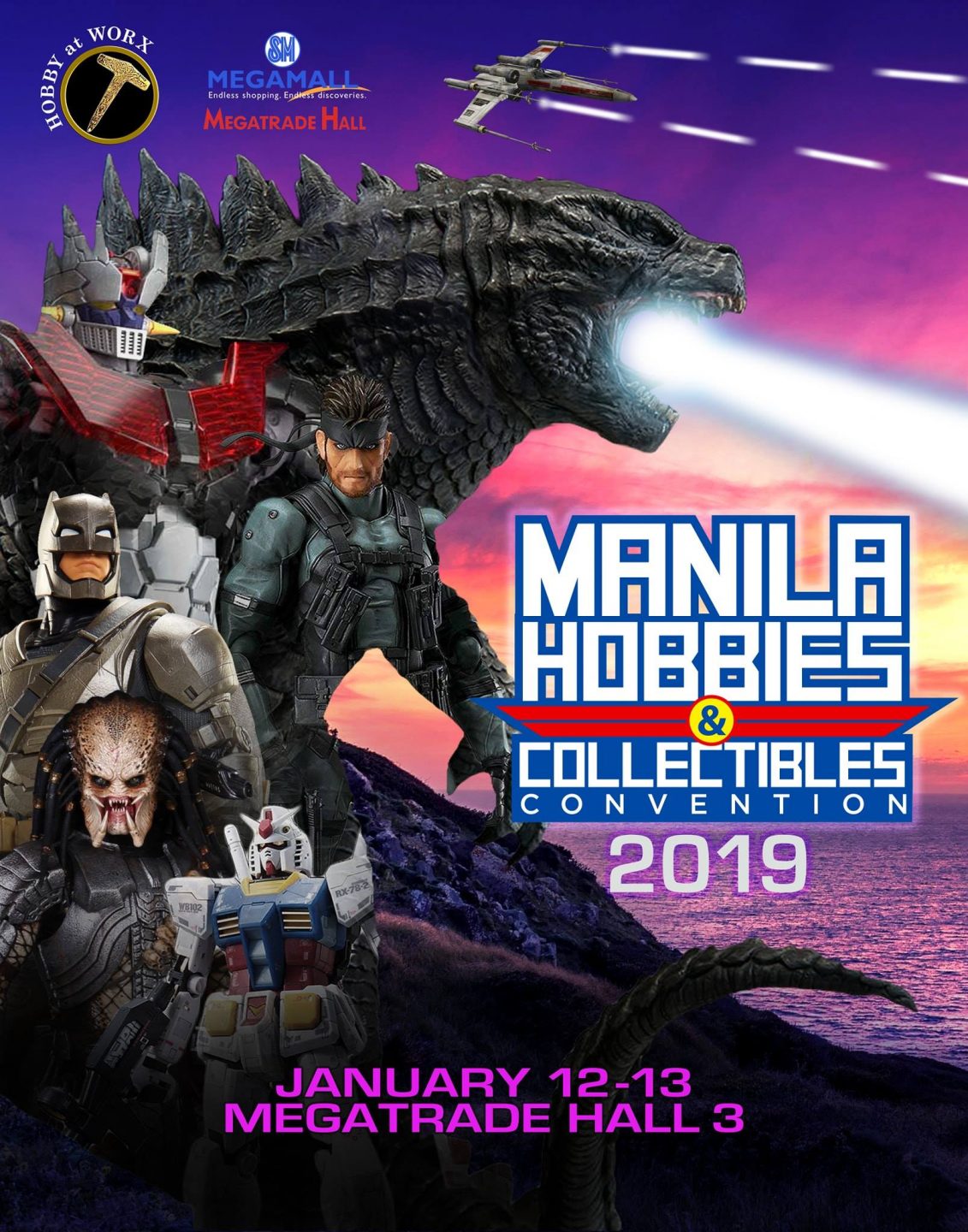 Clearly, the weekend of Jan 12-13 belongs to the toy enthusiasts of Manila. The annual Manila Hobbies and Collectibles Convention is back to kick off the year, and it’s nothing short of a collector’s dream. The event will host over 50 toy sellers and retailers, collectors’ exhibits that feature life-size statues, a Gundam caravan, and a K-Pop competition. Time to brush up on your anime fandoms, friends. Check out more details here. 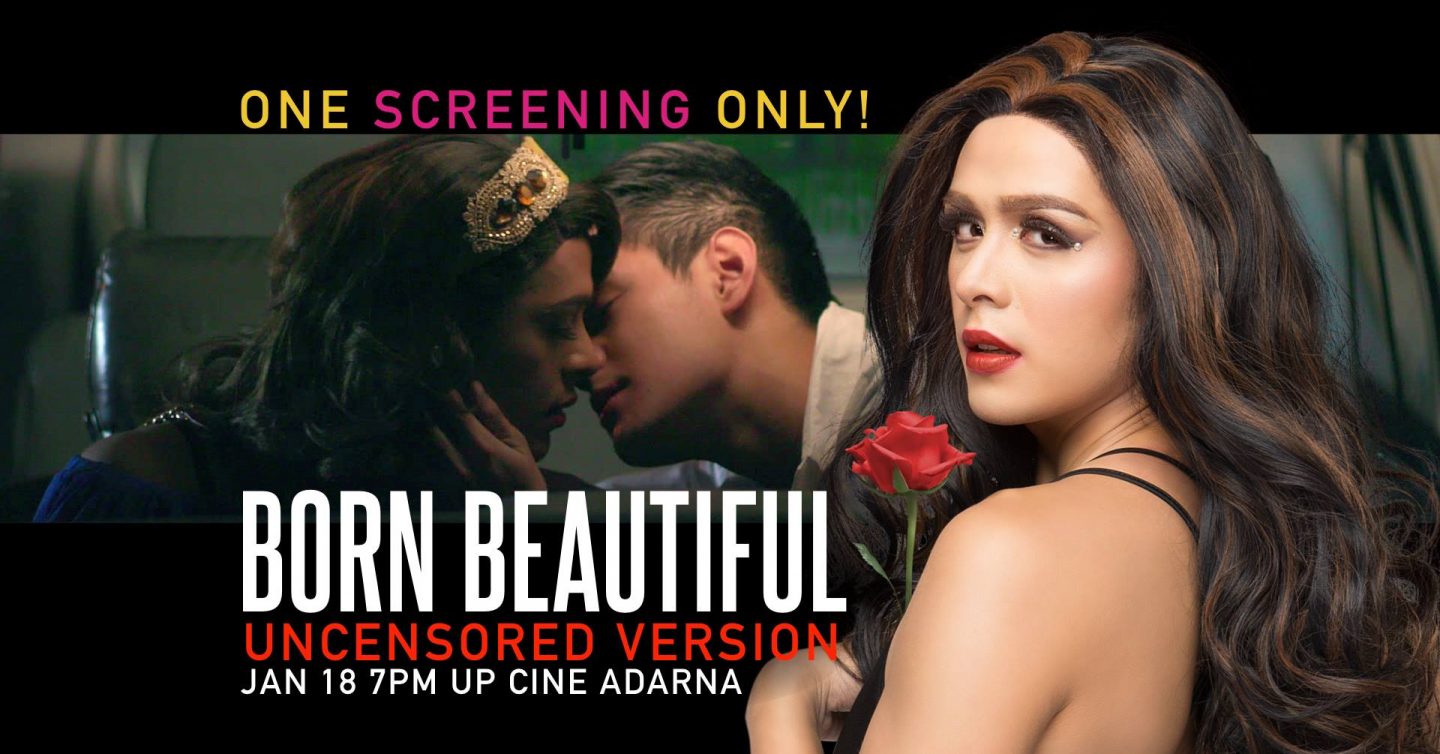 Once upon a time in 2016, we had a progressive (read: worthwhile) selection of films for the annual Metro Manila Film Festival. Out of that roster we got Die Beautiful, which was a festival darling that garnered accolades overseas. The film’s sequel titled Born Beautiful comes out this month, but was slapped with an R-18 rating that resulted in numerous cuts. Before it comes out nationwide, the creators are holding a single screening of the full uncut version. This is probably a once in a lifetime chance to watch the film in full, so hurry and reserve your spot in the limited seating. Here’s how to get tickets.

Not An Absolute Value (Jan 18) 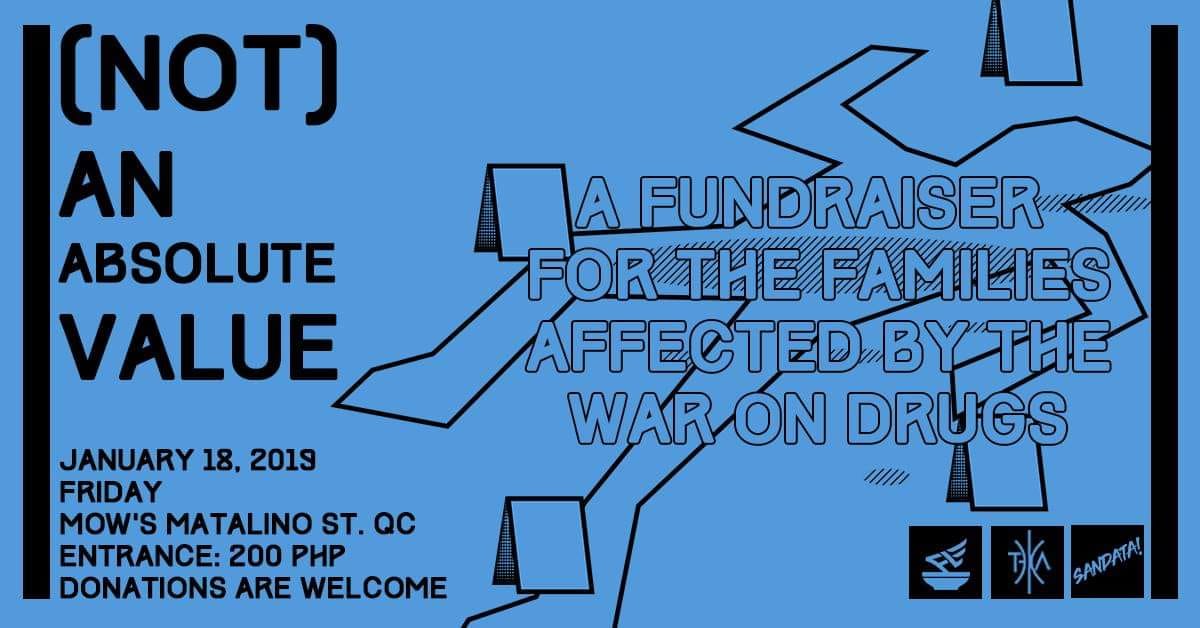 The devastating phenomenon of tokhang has been prominent the past few years, and there’s no one more affected by the carnage than the families of the victims. Not an Absolute Value is a fundraising gig that features performances from BLKD x Calix, Kartell’em, The Buildings, Alisson Shore, kiyo, STILLIFE, and Imelda. The event also promises that “everyone in attendance will be made aware [of the war on drugs’ effect] through their [the victims’] stories.” All proceeds go directly to families affected by the EJKs. Donations will also be accepted. 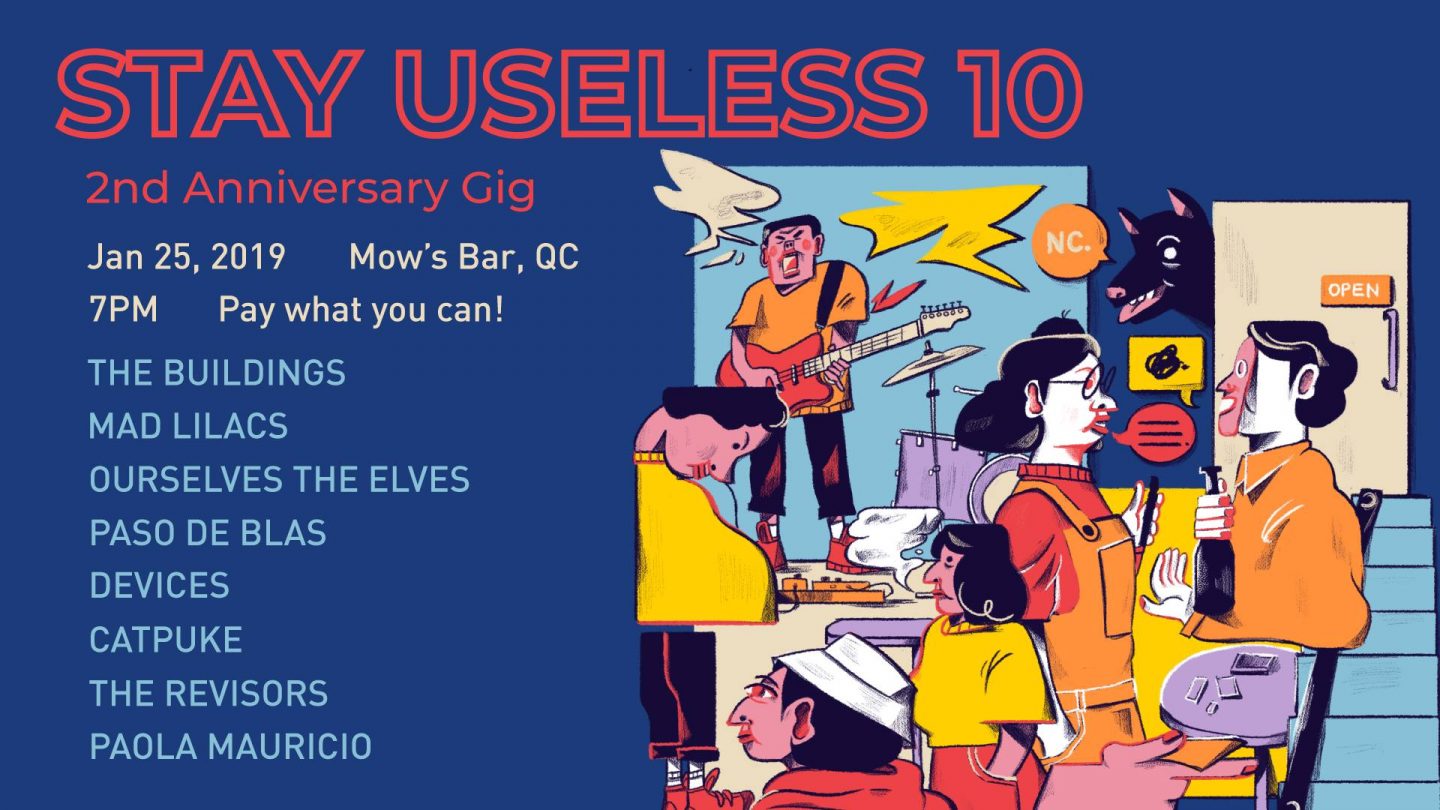 It’s Stay Useless’ second birthday, and they’re celebrating with a pay-what-you-can anniversary gig! Now, just because it says to pay what you can, doesn’t mean you should pay the minimum. We’d like to think that this awesome lineup of acts deserve as much support as they can get! Plus, zines and other merch from Rob Cham, Ches Gatpayat, Sara Rivera, Maryan, The Flying Lugaw, and Ren, Ava, Markus, Kara will be up for grabs at the event. Check out the page here for more info. 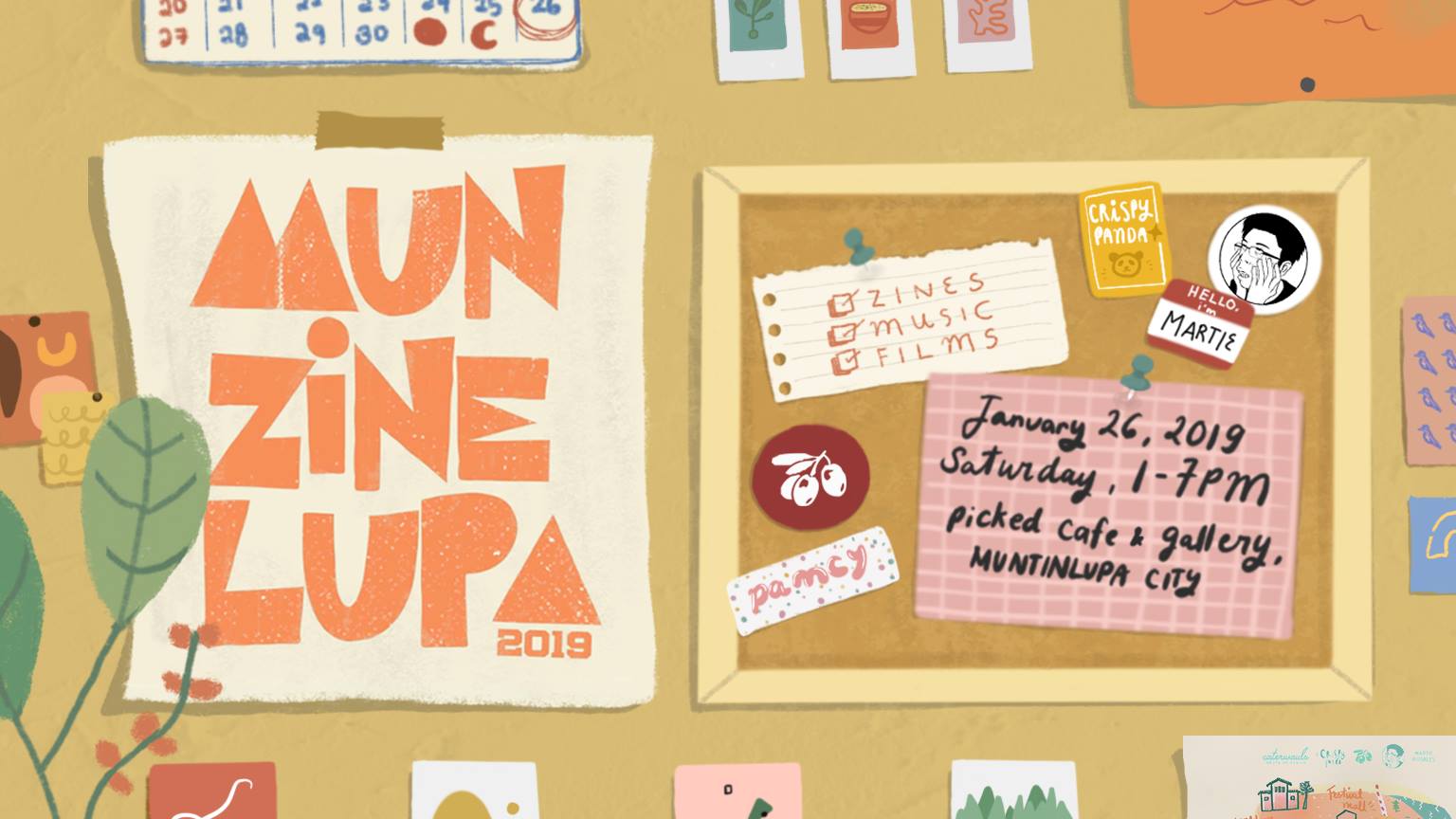 South creatives, rejoice—Munzinelupa is back! The annual zine fest will have over 30 independent artists and their works front and center for this year’s iteration. It’s a great way to support and get to know the creatives from the mysterious depths of the so-called south south. (As a Laguna native myself, I’d just like to say that I promise we don’t bite.) Come through to the Picked Cafe & Gallery on the 26th for a day of zines, music, and films. More on the event here. 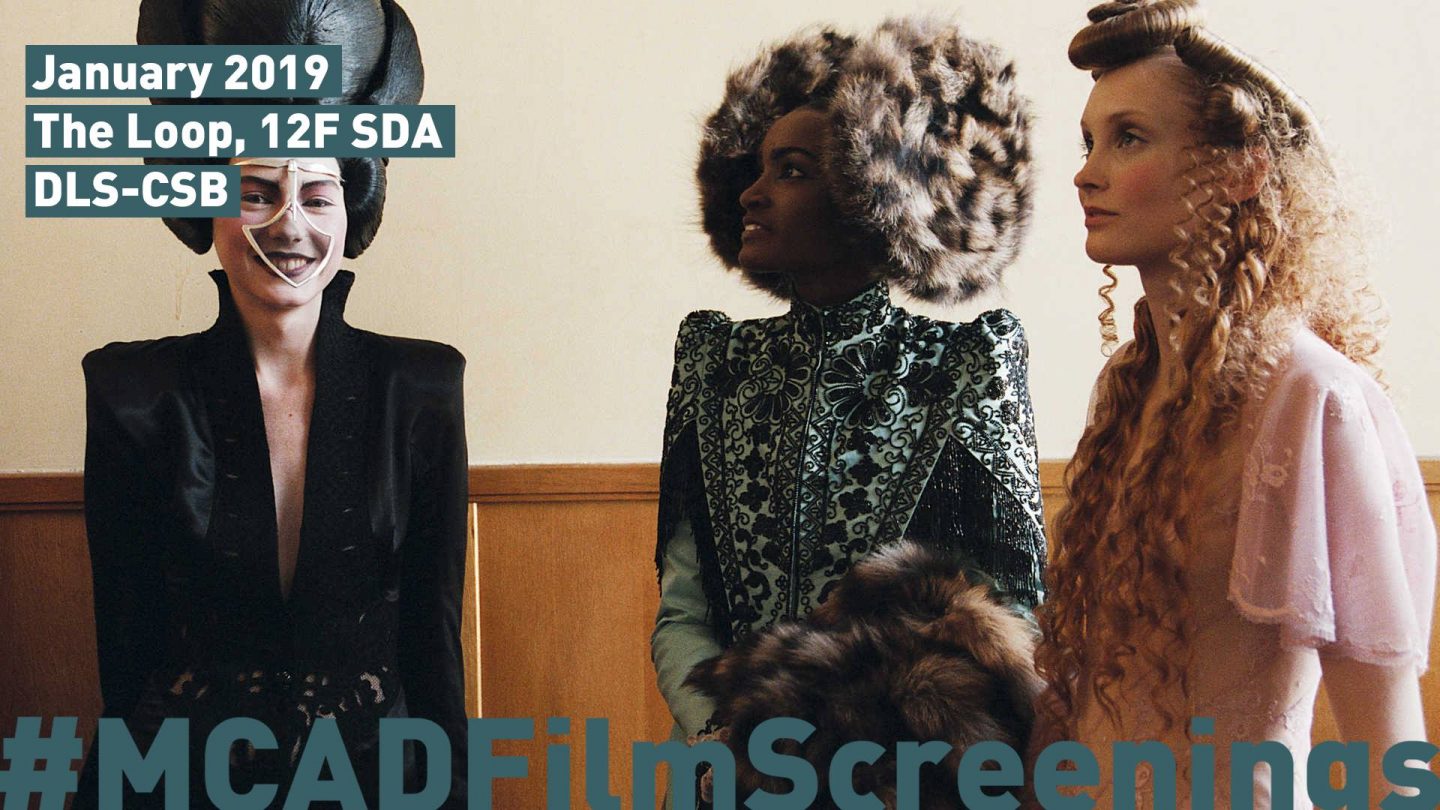 The Museum of Contempary Art and Design (MCAD) is back with their film screenings, and for this month the theme is fashion. The selections are curated by Olivia Lopez, and feature stories and documentaries on the art of creating fashion and its role in society. All the screenings are free and open to the public, so tag along your fashion enthusiast friends. More on the screenings here.

SHAREIf there’s a country you’ve yet to tick off your bucket list, chances...