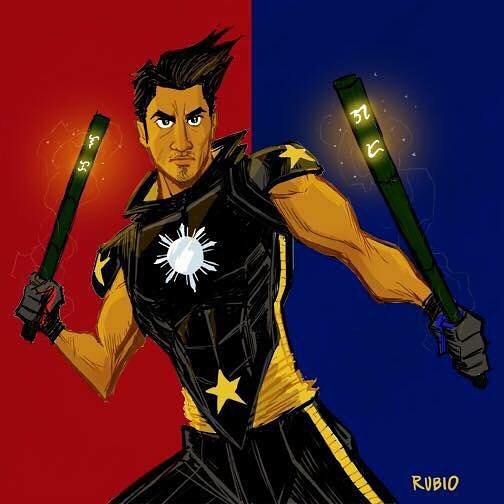 Arnis is probably one of the most recognizable art forms in Filipino culture, and also one of the coolest to boot. It’s a skill worthy of a superhero, and Pixar artist Bobby Rubio is about to create a comic book that features a Fil-Am Arnis fighter with magical Arnis sticks. Now that’s a superhero I’d pay to watch a movie about.

I’m back to working on my next project #NeighborhoodLegend! I want to create a #FilipinoAmerican superhero and he has enchanted #Eskrima sticks! Sure, I like #Nightwing and #BlackWidow but I want to see a #FilAm doing our martial art! Eskrima is a #Filipino Martial Art! #ShareTheCulture #ChangeTheWorld

The artist took to Instagram last Jan 25 to post his initial design of the superhero. The comic is called Neighborhood Legend, and features an Eskrima (which also means Arnis) fighter named Danny Reyes. His costume prominently displays our three stars and a sun, and his Eskrima sticks have glowing Baybayin etches which mean “strength” and “beauty.” The artist says that both are needed to practice Eskrima.

We also love that our boy Danny has a badass Eskrima master named Grandmaster Liwayway. She’s also a Babaylan, which is a pre-colonial Filipino shaman. Is it too much to say that she’s already my favorite character?

There’s no news yet on when it’ll be out, but we’re definitely stoked to see what kind of cool crime-fighting action Danny’s going get into.

SHAREBy Carmel Ilustrisimo Illustration by Lianne Fondevilla There is no stage for the...