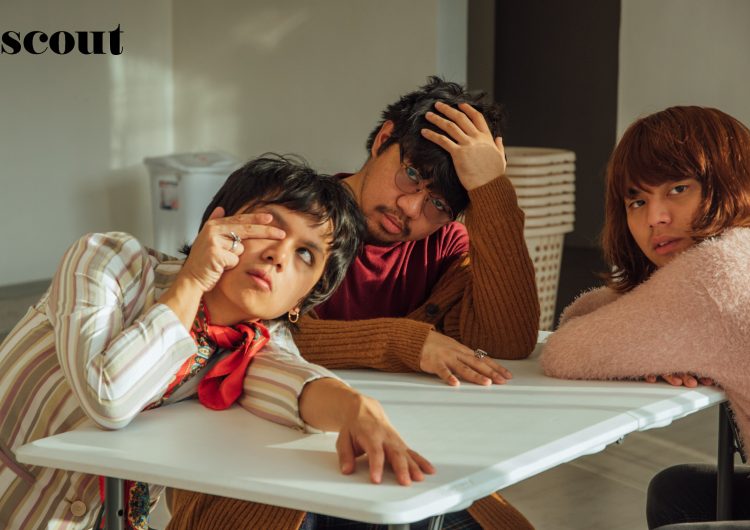 The boys of IV of Spades, Blaster Silonga, Zild Benitez, and Badjao de Castro, are stars. This is undisputed. Among their accolades: winning Air Asia’s “Dreams Come True” competition and Best Southeast Asian Act in the MTV Europe Music Awards, performing internationally including Clockenflap 2018, garnering a #1 hit on the Spotify Globaly Chrts with “Mundo,”  and becoming a household name among hundreds of thousands of fans across the world.

Fresh off their album release, the boys are poised to embark on a world tour of sorts.

Fresh off their album release, the boys are poised to embark on a world tour of sorts. With tour dates in the U.S., Canada, Dubai, and Abu Dhabi lined up, their 2019 is busy. This marks another important milestone for the band, and the first time for Badjao and Blaster to head to the United States.

Before their tour, the boys are saving all of their energy. They won’t perform in the Philippines anytime soon, save for Malasimbo in March. Time for gigs is replaced with time for promoting their latest and first album, CLAPCLAPCLAP!. The curious album name is their way of saying thank you to their fans.”Why do people clap? Appreciation kasi ‘yung pagpalakpak. Dati walang pumapalakpak noong nagsisimula pa lang kami. Ngayon na may people na nandiyan para sa amin lagi, ngayon gusto namin silang palakpakan sa mga ginagawa nila,” quips Zild. 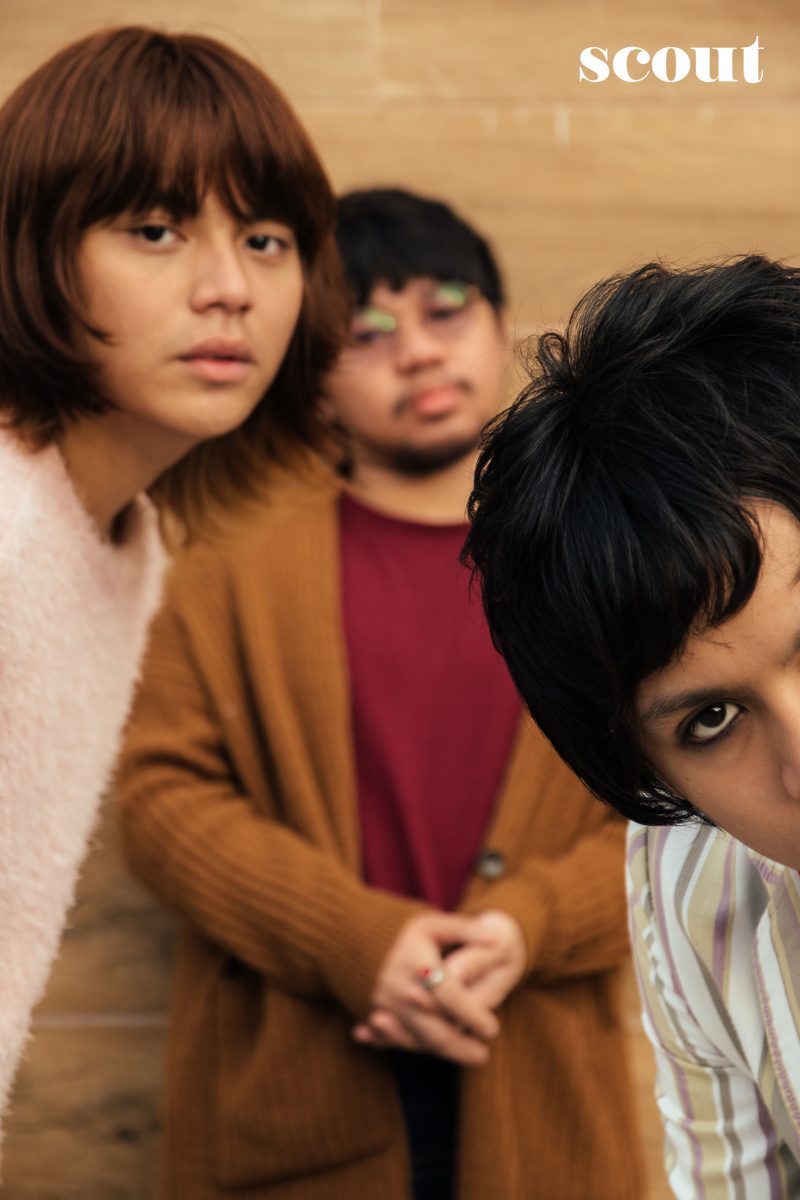 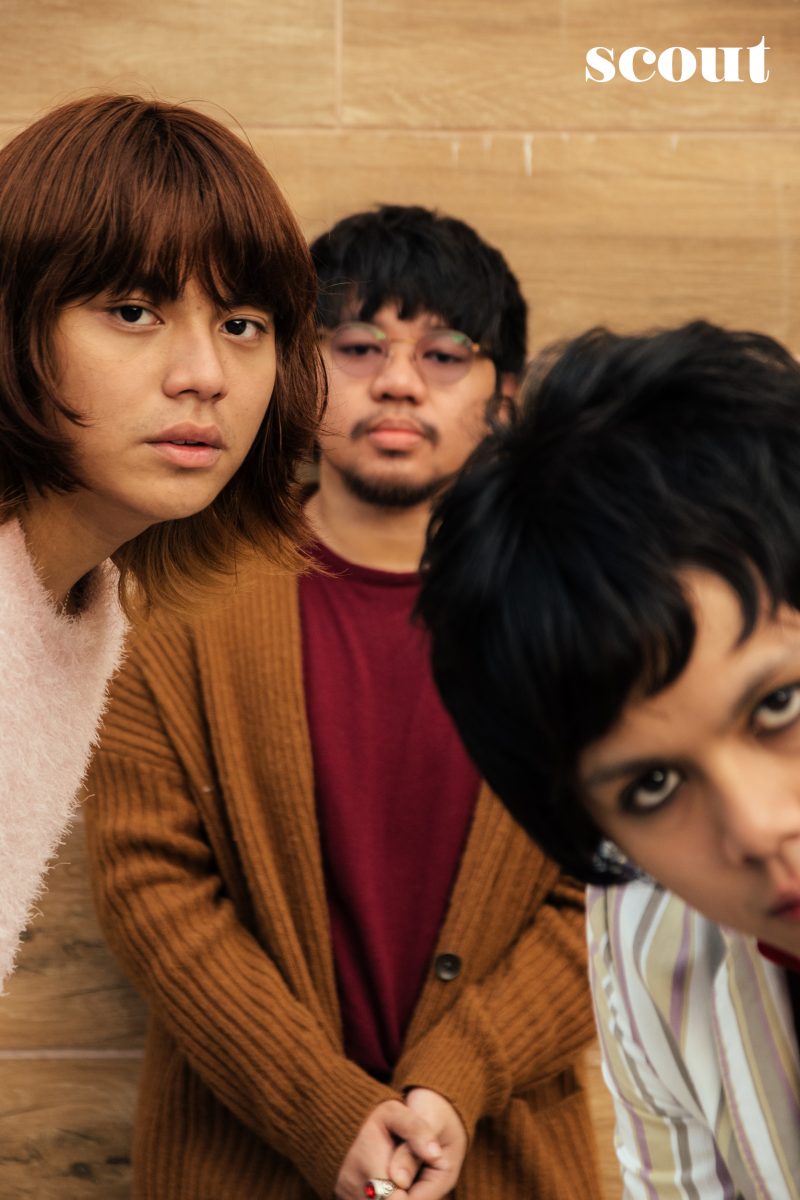 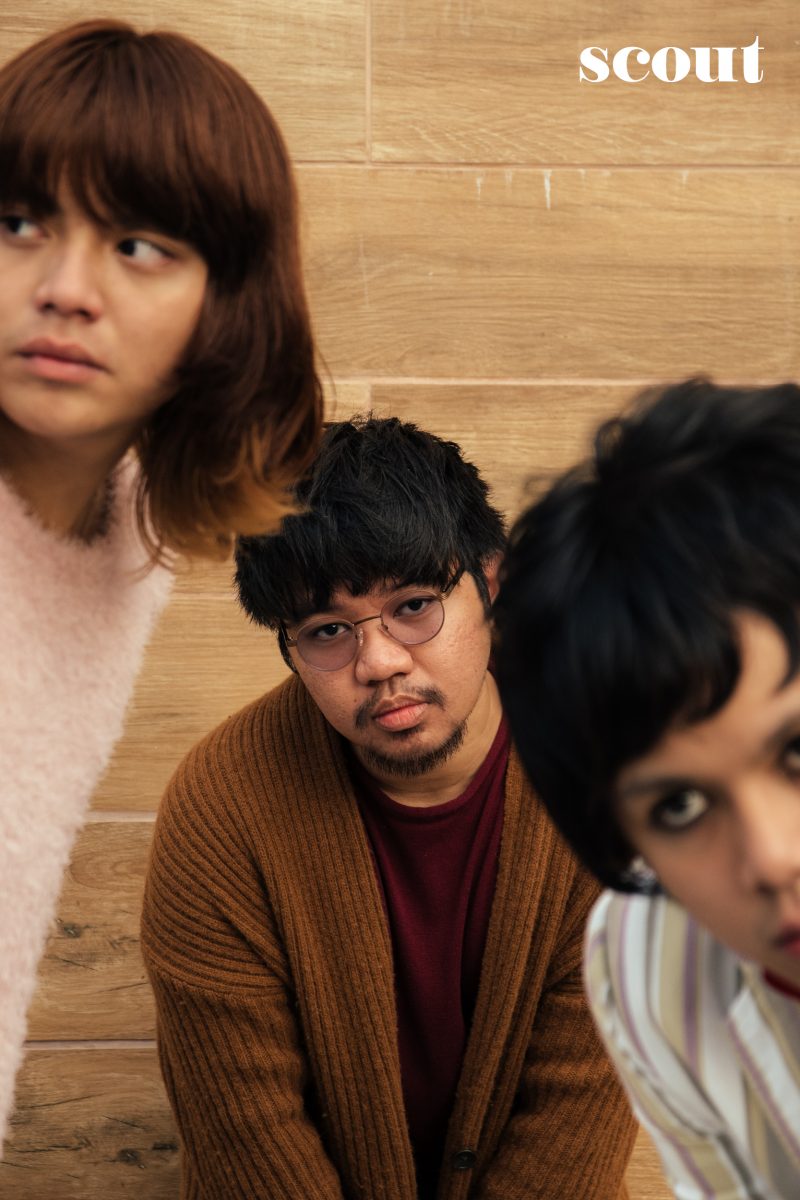 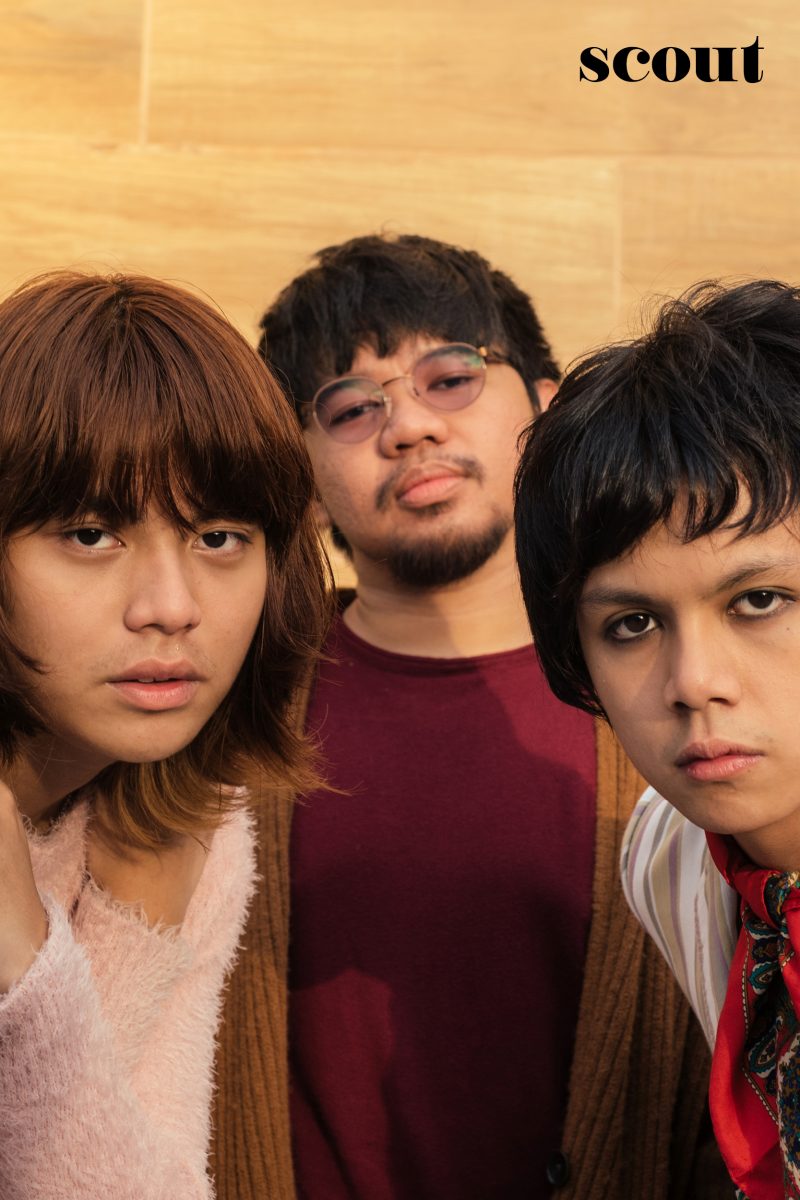 CLAPCLAPCLAP!, according to band manager and Blaster’s father Allan Silonga, was conceptualized and written in between their performances in the latter parts of 2018. With laptops in hand, the band spent “all of their free time”—in airports, airplanes, and hotel rooms—working on the album. One album, comprised of 15 tracks, done in the span of four months.

When you talk about IV of Spades, it’s hard not to talk about the departure of their rhythm guitarist and former vocalist Unique Salonga, who released a solo album last August. While Blaster and Badjao have considerably lent a hand in the album as compared to band’s previous releases, Unique’s influence is still present; he is credited in “In My Prison.” Both albums have been received positively, but fans of IV of Spades can’t help but compare not only both of the albums but the band before and after his departure.

On midnight releases and vague promotions 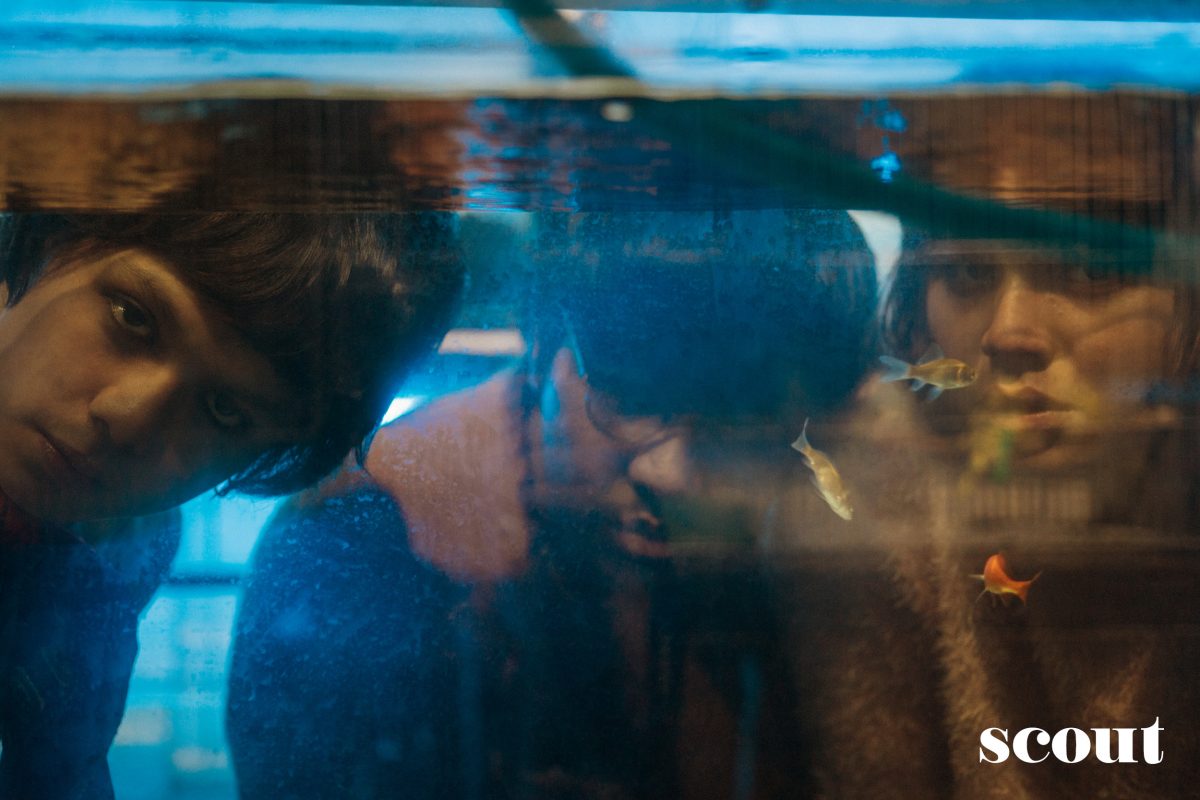 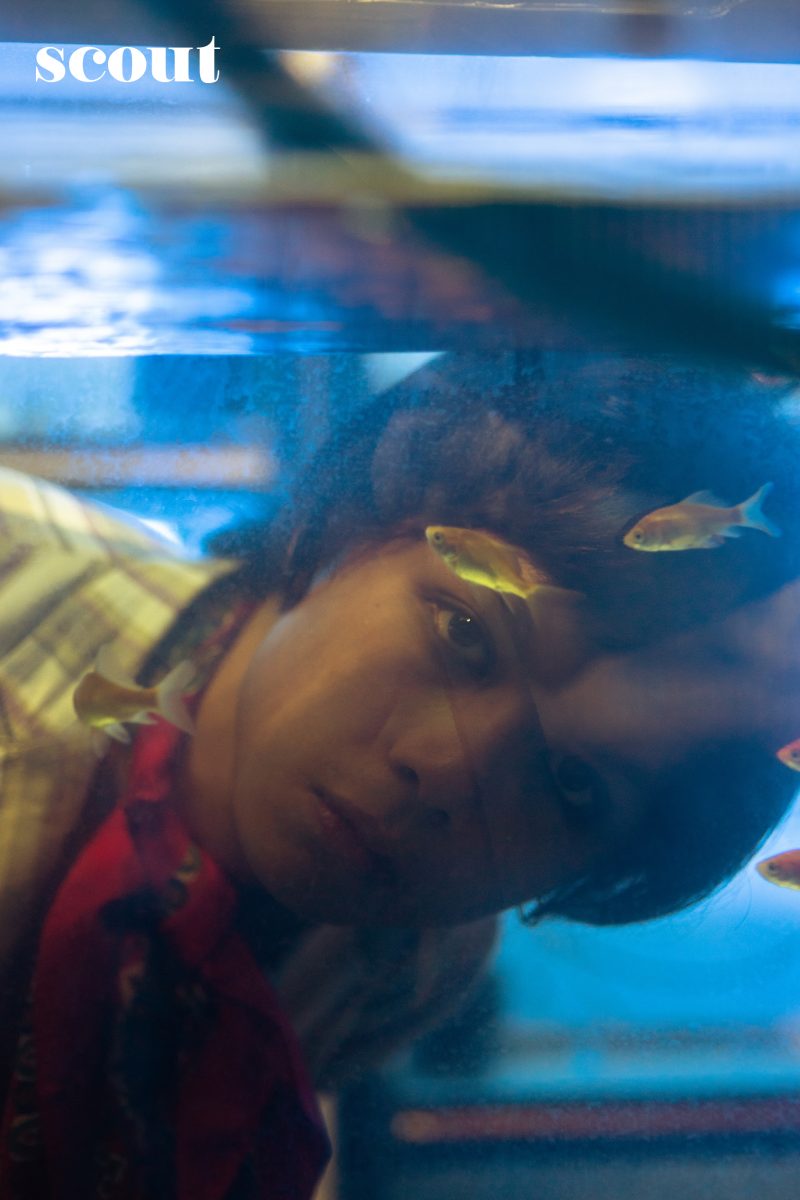 While talking about their constant collaborators—Shaira Luna and Two Fold, to name a few—Zild mentions something curious: the idea of “wishful representation” for IV of Spades as a band. Without a doubt, the band’s way of presenting themselves lends much to their fame, and their intention of being seen a certain way isn’t only a matter of branding, but also about communicating a very distinct lifestyle. 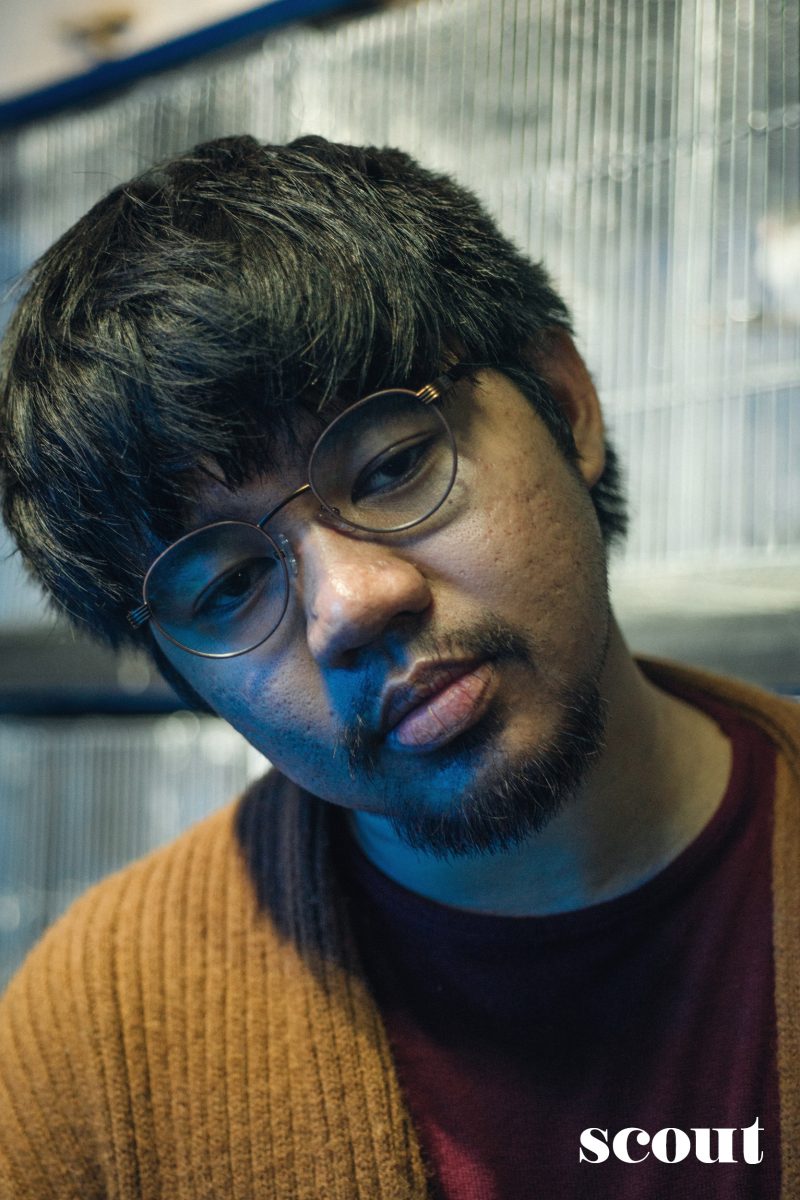 So who influences the band? While each member of the band is currently rotating different artists (Nirvana, Soundgarden, and Eraserheads for Blaster, Rex Orange County and UDD for Badjao, and The Beach Boys and Ryan Cayabyab for Zild), they each owe their fashion sense to the greats of decades past: David Bowie and The Beatles, to name a few. Blaster poses that the fashion of iconic artists are justified by their music. “Mga damit namin, parang di ko kaya suotin ‘pag ‘di kami banda. Like they coexist. It’s really a lifestyle.” 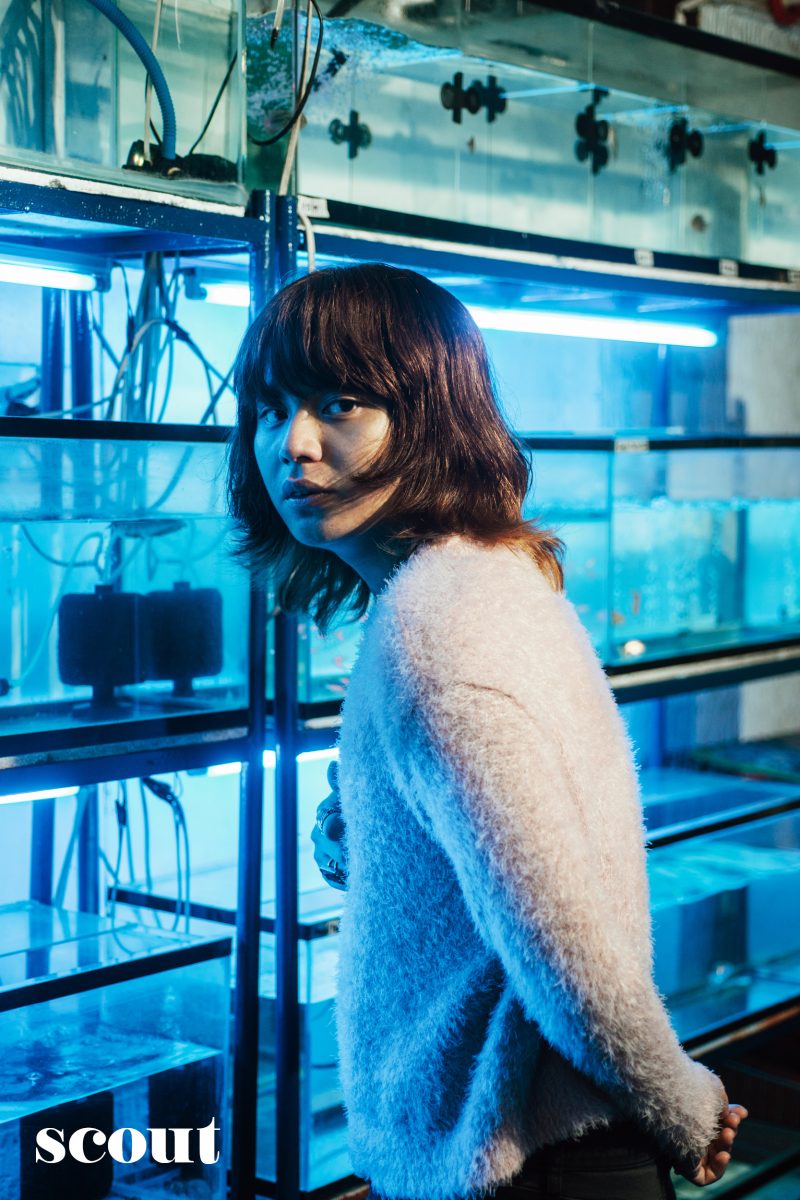 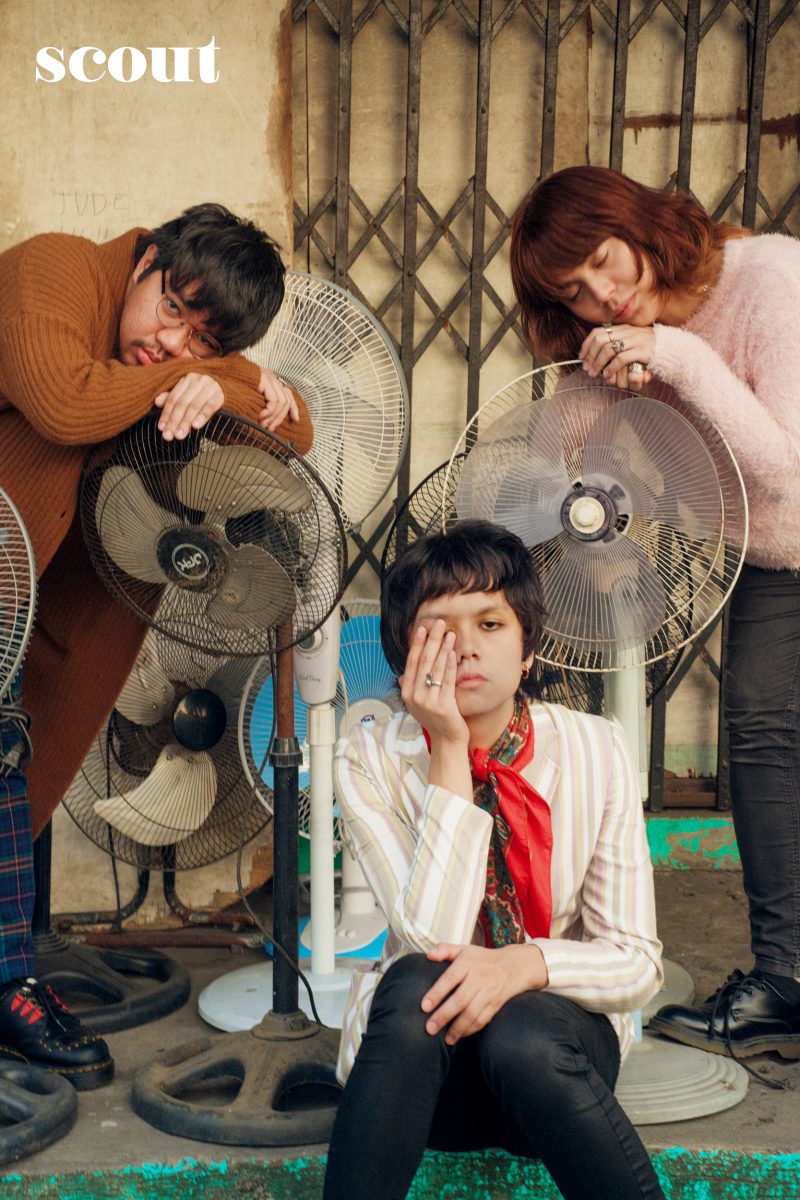 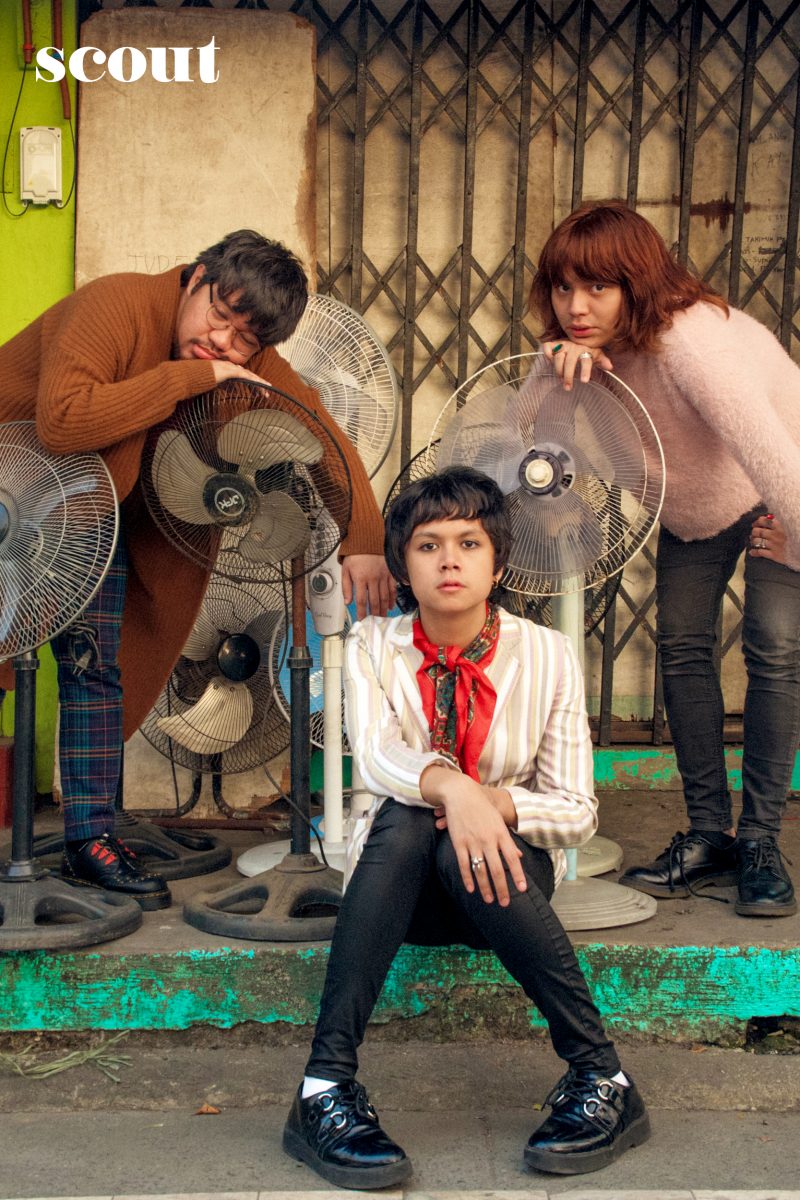 Jumping off 2017’s music video releases for “Ilaw Sa Daan,” “Hey Barbara,” and “Where Have You Been, My Disco?,” 2018 was the year the band’s momentum reached full swing. Yet the album, released mid-January this year felt out of rhythm according to comments on social media. While the main references of what makes IV of Spades who they are are still present—the “‘70s-inspired” flashy outfits, the equally flashy visuals, the stage theatrics, the guitar solos, the tinted shades, the eyeshadow—their debut album failed to have the same sense of awe carried by the handful of singles that have brought them to prominence. A day after the album release, some people from social media are quick to declare that they’ve reached their peak, and the band is plateauing. Riding the wave, so to speak. 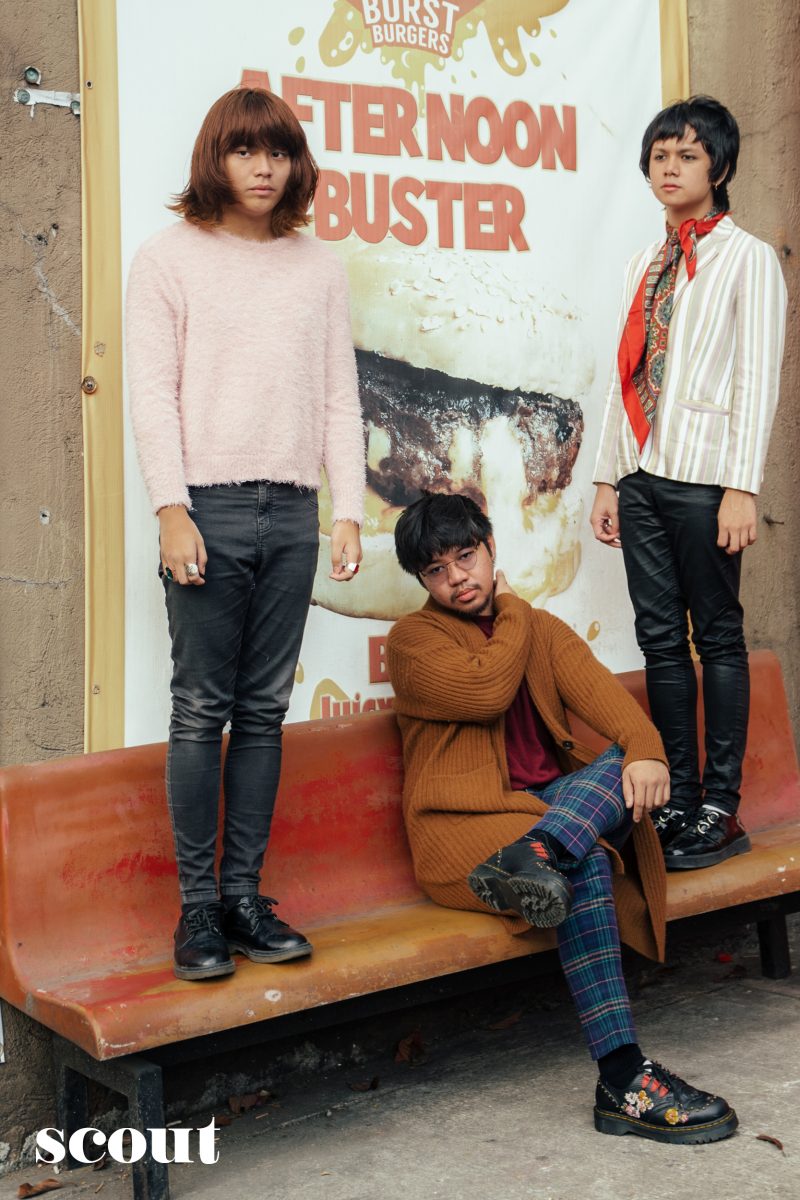 But whether it’s positive or negative, the boys enjoy looking at what people think of them. For the many, many letters sent to them by adoring fans, they spend the time earnestly going through each one (“Nakakapanlambot basahin,” according to Zild). They do the same thing when it comes to social media. A habit that the boys of IV of Spades share is that they both routinely look up themselves and the band’s name on social media, which isn’t surprising given their social media presence. They are, to a remarkable but also horrific point, self-aware. They know the clever quips made of them, they know the jokes made at their expense, and, for better or for worse, routinely reference these jokes and insults.

A habit that the boys of IV of Spades share is that they both routinely look up themselves and the band’s name on social media, which isn’t surprising given their social media presence. They are, to a remarkable but also horrific point, self-aware.

After a taping for television, Zild, Blaster, Badjao, and their posse head to Lilac street in Marikina for some wings at their favorite food joint. Badjao grew up around the neighborhood, Blaster lives across town, and Zild lives in nearby-but-not-so-nearby Quezon City, but it seems like they are all in their element. This is where we meet the boys, away from all the glam of the spotlight and right smack in the middle of the places they feel comfortable in. They happily agree to walking up and down the street to take some pictures, and while their loud clothing catches the eye of passersby, they walk, talk, and, if you look hard enough, look like a tight knit of friends enjoying an afternoon stroll. But they are also misfits, who, instead of finding a way to fit in, have paved their own way, while wrestling with the fact that they have emerged as an influential voice for their fans, many of whom are bustling teenagers navigating through their own identities. Their struggles are reflective of the struggles of the youth today.

Which makes their relationship with their fans all the more nuanced and precarious. 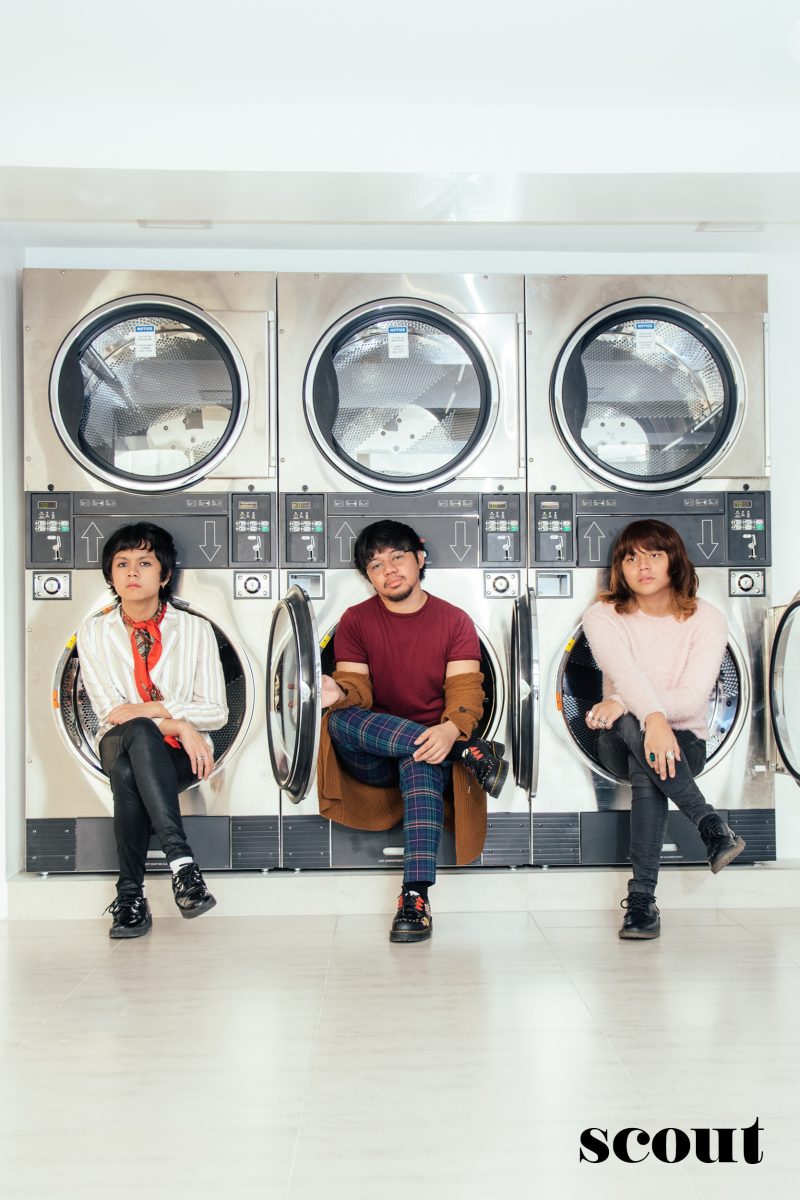 Sa akin, everybody stands up for something. But if you’re going to weaponize what you believe in, that’s toxic.

I asked this before, and I honestly wasn’t satisfied with your answers, but how do you guys want IV of Spades to be remembered?
Blaster: Decade-defining.
Zild: The inspiration to the misfits, to the ones who don’t fit in. We want to tell people that they can be themselves even if they don’t meet the standards of society.
Badjao: Gusto ko, kasama mo kami sa pagtaas at pagbaba ng pinagdadaanan mo. Sa sobrang lungkot mo, kasama mo kami. Sa sobrang saya mo, kasama mo kami. 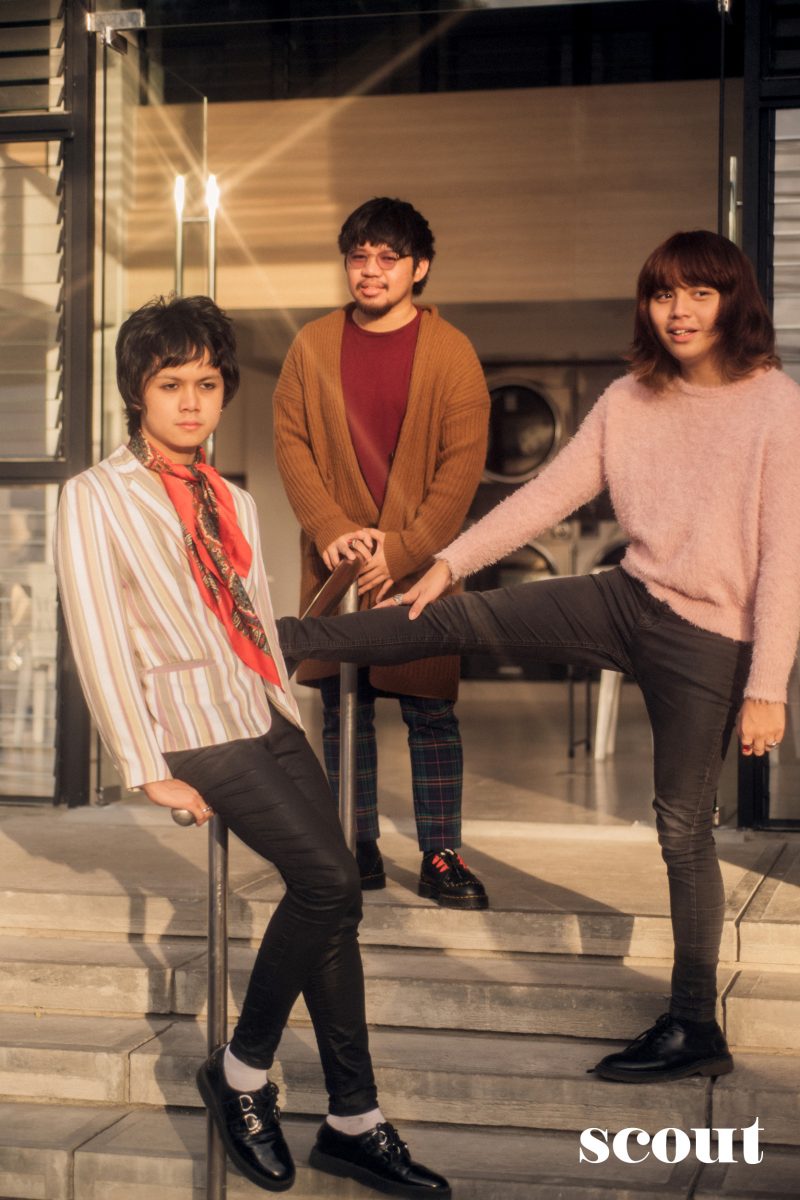 Zild: Hindi sa nag-sa-save kami ng tao through our music, more of sinasamahan namin sila. When we see fans, we see people who look up to us. Nakikita namin sa mata nila na may tama kaming ginagawa. Na-i-inspire kami lalo na ipagpatuloy namin. We want our music to breathe within their bones.

IV of Spades is SCOUT’s digital cover for January 2019. #SCOUTxIVOS

SHAREBring out your music boxes and baker boy hats, “Anastasia” is coming to...