Every day, we see marine creatures strangled with straw or the rim of a plastic bottle. Marine mammals even die because of plastic ingestion. In 2017, it was even reported that the plastic waste floating in the ocean could even form an island as large as France. If you still think plastic pollution doesn’t concern you, allow us to remind you that you might have eaten microplastic waste and plastic could also interrupt an MRT ride.

On a positive note, we’re slowly learning to change our ways. Although difficult, more and more people are embracing a plastic-free lifestyle. We’re also finding more ways to recycle plastic ways. Even our government has taken a huge step with the recent efforts to revive Manila Bay.

Despite this collective effort to protect the environment from plastic pollution, there are still apathetic individuals who throw away their garbage mindlessly. But Nadine Lustre sets an example on how to deal with this kind of people. 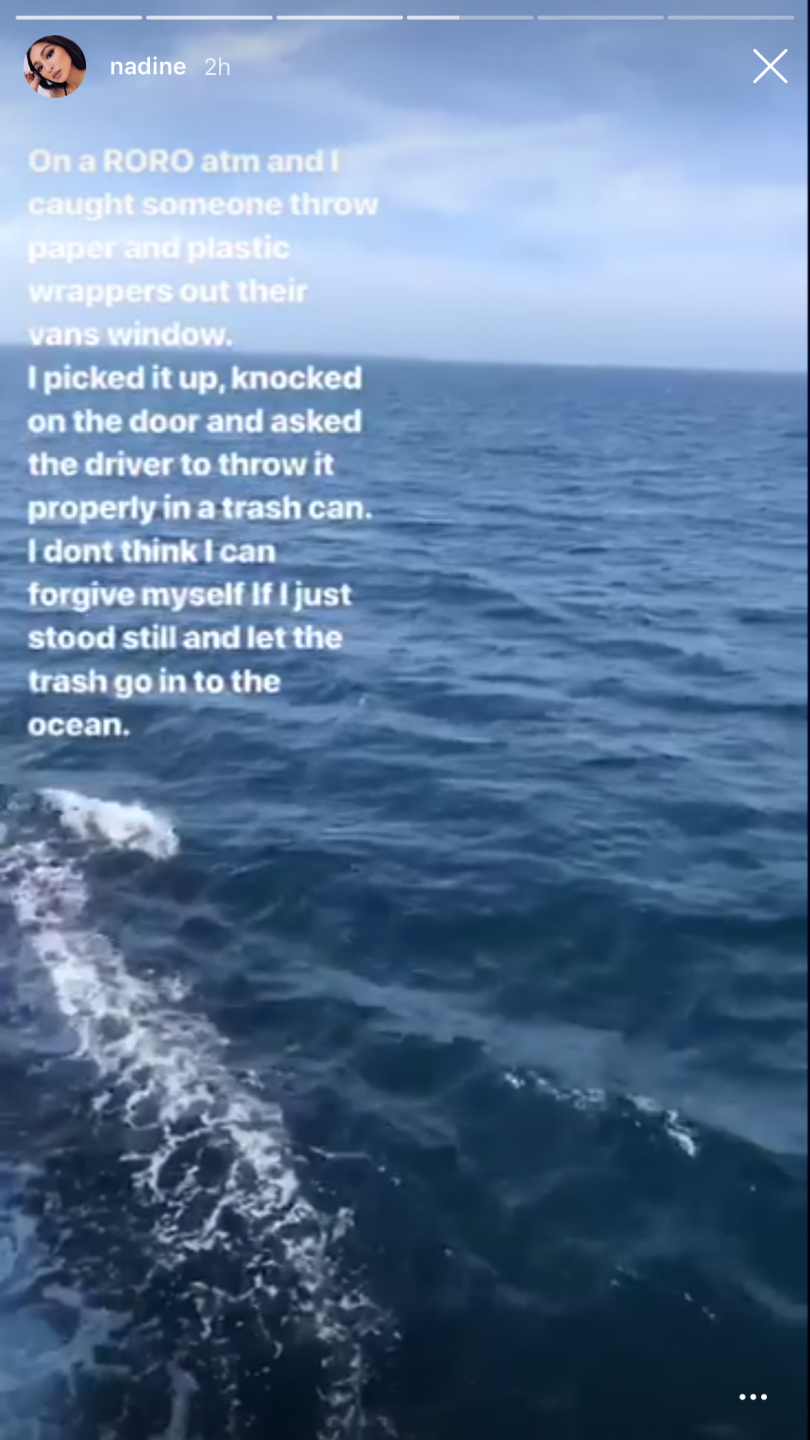 In an Instagram story earlier today, Nadine wrote that she was on a ship ride when she saw someone throw out paper and plastic wrappers improperly. Upon seeing this, Nadine, being the wonderful person she is, picked up the trash and told the driver to throw it away properly. “I don’t think I can forgive myself if I just stood still and let the trash go in to the ocean,” she wrote.

You may think that a plastic wrapper is too small to make a difference, but it can still largely contribute to marine pollution. In 2018, the Metropolitan Manila Development Council’s (MMDA) records showed that we produce 56,000 cubic meters or 1,200 to 1,500 truckloads of trash daily. The Philippines was also hailed the third largest contributor of plastic waste in the ocean with 2.7 million tonnes of plastic waste. That’s a reminder that even the smallest candy wrapper can still contribute to pollution.

“We are part of everything. Everything that we do to harm the earth will eventually come back to us, maybe not now but in the future.” 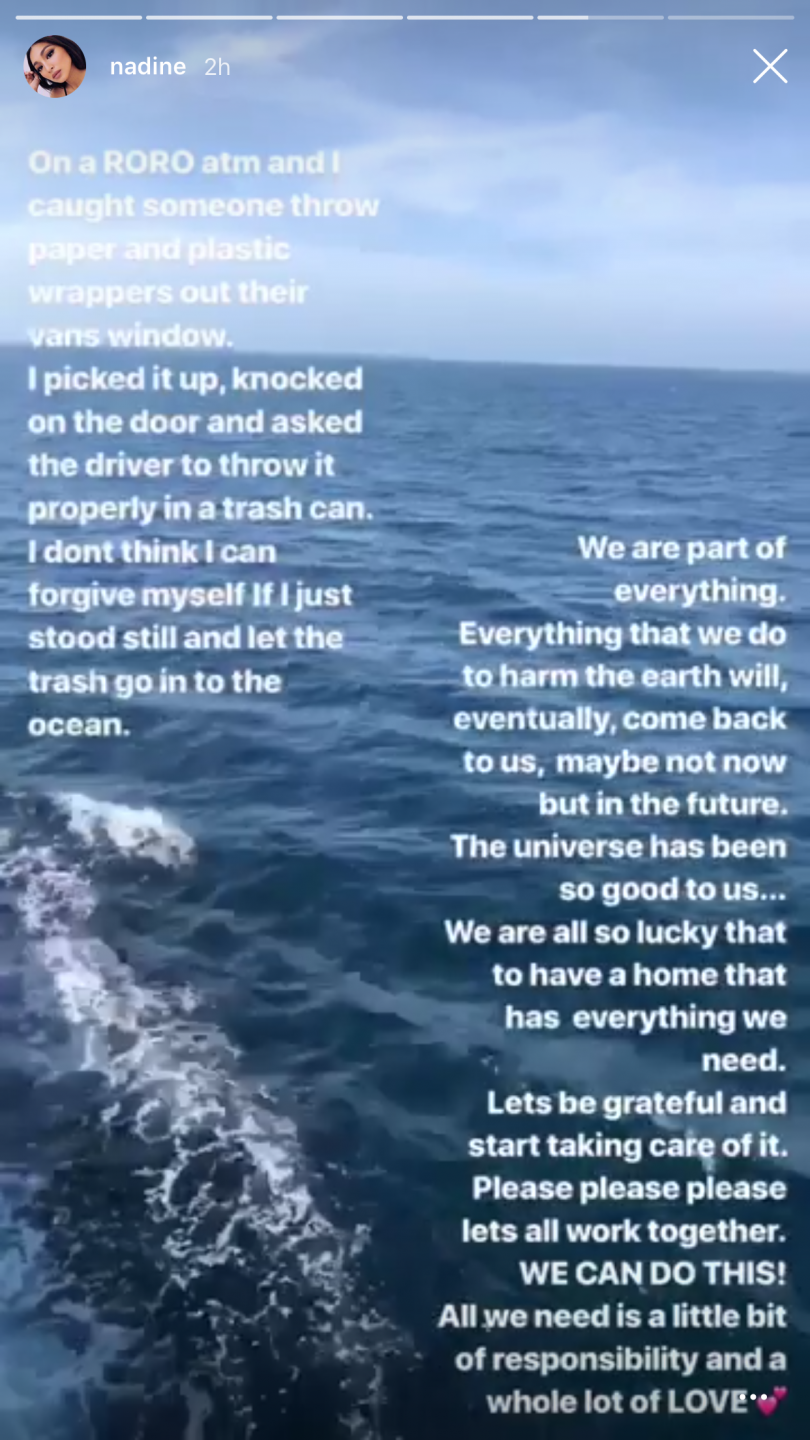 Nadine shows us that we should take a stand for the world we live in. Last year, she also joined a cleanup drive in Siargao together with James Reid, Lauren Reid, Jack Reid, Kiana Valenciano, and friends. Well, that’s the role model (or president) we need.

The beach is NOT a trash bin! ?? Keep the beach happy and throw your rubbish in the bin! ?? Impromptu beach clean up with our mga friends for the #SIRENASPArty weekend! @sirenaspasiargao

“We are part of everything. Everything that we do to harm the earth will eventually come back to us, maybe not now but in the future. The universe has been so good to us. We are all so lucky to have a home that has everything we need,” she reminded her followers. “Let’s be grateful and start taking care of it. We can do this! All we need is a little bit of responsibility and a whole lot of love.”

So the next time we see a friend, or even a stranger, throw that cup of fancy frappe on a sidewalk, be like Nadine: Call them out and make sure they dispose of it properly. And for the guilty litterers, don’t wait for someone to take notice of your bad behavior before you fix it. Also, join cleanup drives. After all, it’s time to be good stewards of this world.

SHAREWhile the government’s own provisions are leaving folks a little unsettled (and understandably...

SHAREThe guys of IV of Spades are everywhere.  And by that, I mean,...