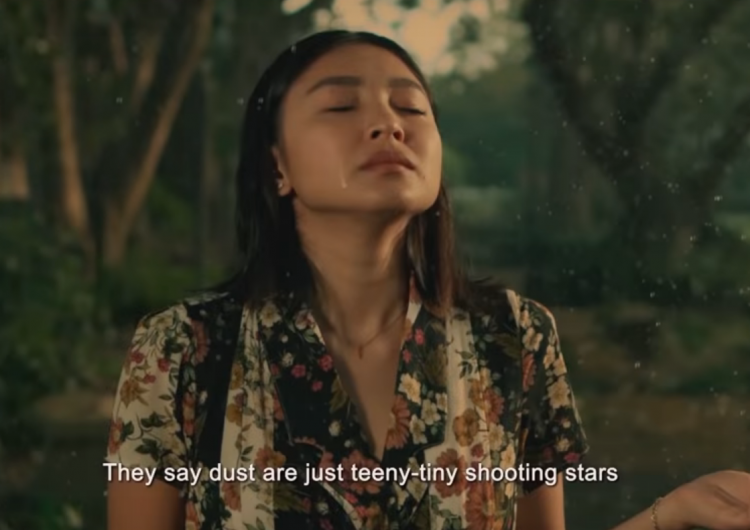 In my last year of college, I took up a literature course on mythology and folklore. We spent a lot of our time discussing the many facets of a myth and what makes it so, and I never thought it would be as complex. I had always thought that myths were just there because, well, they were there. We were always told not to stand under a balete tree to avoid the tobacco ash of the kapre living there, but we were never told why he liked smoking so much. We were always taught to say “Tabi tabi po,” when walking through wooded areas to pay respect to the home of the duwende, but never how they got to living underground. “Ganon na talaga dati pa eh,” the adults would reply back if I asked.

The same way, we were told through movies and fairytales that love is this and love is that. A prince is destined to end up with his princess. A longstanding love is meant to be reciprocated as long as you wait for it. In the case of Nadine Lustre’s Maya in director Irene Villamor’s latest offering Ulan, a kiss in the rain guarantees a forever.

After all, it’s how her lola knew that she’d spend the rest of her life with Maya’s lolo. It’s a lovely thought to cling to. A one-and-done step to figure out love, the elusive thing she’s been trying to figure out all her life. Of course, we all know it doesn’t work that way, and Maya learns this lesson in this not-quite romance story, not-quite coming-of-age story in the hardest way possible.

In the beginning, young Maya’s world revolved around her lola’s stories of lore, which included the most supernatural like the tikbalang, to the most mundane like the rain. Young Maya used these tales of lore as a vehicle to cope with and understand the world around her. The situation is the same for some of us who grew up with a superstitious lola-figure of our own, which gives the film a sense of nostalgia for its audience. Despite the magical realism being the most otherworldly element in the film—and perhaps in recent mainstream Filipino cinema as well—it’s also one of the most relatable.

Myths can be used to teach us many values unwittingly, like respect through saying tabi tabi po and faith through rituals like alay. In Ulan, we see Maya literally being taught by lore through magical realism.When Maya first meets the tikbalang couple getting wed in their backyard amid the rain on a sunny day, she asks them why they still choose to marry despite the heavens itself protesting? The tikbalang then answers, “Bakit naman kami titigil?” and tells her that as long as they love each other, nothing can stop them, not even the rain. And so, Maya falls in love with the thought of an all-conquering love.

Aning, the sobbing storm that weeps in front of Maya, who tells her that she will one day be hurt beyond all imagination by a love lost. In this, the rain becomes her mentor.

Later in the film, she also meets Aning, the sobbing storm that weeps in front of Maya, who tells her that she will one day be hurt beyond all imagination by a love lost. In this, the rain becomes her mentor. When she hugs the weeping Aning and she, along with the raging storm, calms down, the rain becomes her companion.

On the pains of loving

As Maya, now played by the enigmatic Nadine Lustre, grows to be a young woman, she still clings to her belief that a special, all-powerful love is out there for here to seek out and find, and the journey takes her through much pain. She first looks for it in her long-time love, Mark, her old friend and her version of “the one that got away,” whom she goes to visit despite pouring rain to bring him a cake for his birthday and to confess her love. When she arrives at his doorstep, Mark opens the door to greet her, and to introduce her to his wife and child. Maya goes home with broken heart. “Feeling ko talaga sinumpa ako eh,” Maya cries to her best friend. “Tuwing may magandang nangyayari sa’kin, bigla nalang uulan.” She blames the rain, who taught her unstoppable love. She vows never to cry again.

She then experiences a different kind of heartbreak in Andrew, a smooth-talking, prince of a man who twirls her through a dance floor at a wedding and sweeps her off her feet. Their relationship blossoms. One day, she tries to seal their fairytale love by having their magical kiss in the rain, the one her grandparents had that she hoped to emulate. Before they could kiss, Andrew’s work friend Princess interrupts. She comes between Maya and Andrew’s relationship and reveals that he’s nothing like the prince she dreams of. He breaks up with her unceremoniously through a text message, and Maya is back where she started with a broken heart.

Every time Maya goes home defeated and lets her tears fall like rain, she dusts herself off and opens her heart again. It’s a defiant innocence so well-embodied by Nadine, who proves to be a force to be reckoned with on her own.

We watch Maya as she goes back and forth on the unstoppable love she so wholeheartedly believes in. She believes that her true love is out there almost like it’s her life’s mission, because all she wants is to give someone all the love she has in her. Every time Maya goes home defeated and lets her tears fall like rain, she dusts herself off and opens her heart again. It’s a defiant innocence so well-embodied by Nadine, who proves to be a force to be reckoned with on her own.

The film is also a perfect breakout film for Nadine as her first project without her on and off-screen partner, James Reid. It’s almost poetic, how the movie’s topic of self-growth also parallels the mark of another milestone for the actress. This, and that Nadine seems to take on Maya’s character with such ease and authenticity, it’s easy to realize why the director handpicked her to play the role.

In the last act, Maya finally meets Carlo Aquino’s Peter. The two meet almost serendipitously. Maya drops her belongings during a particularly windy and, of course, rainy day, and Peter was there to catch her—err, her belongings. Leave it to the rain to shape Maya’s fate once more.

Over time, the two create a genuine friendship, which turns into love. This is different from all the others, because, as she and Peter share the kiss under the rain she had always wanted, Maya recognizes this as the one she has waited for all along. But, through the interjection of fate in the form of a violent storm, Peter is taken away from Maya forever. Aning’s almost prophetic line and final lesson to Maya had finally come true.

Read more: In figuring out what love is, I found something else

After the tragedy, we see Maya revert back to her childhood lens. “Naniwala ako,” says Maya to the tikbalang, drenched in tears and rain. “Sabi niyo walang makakapigil sa pusong umiibig,” she laments, heartbroken. This might finally be the moment where she loses all hope in love.

In my college class, one thing we learned about myth is that it is not necessarily synonymous to just “make-believe.” In fact, myths are an amalgamation of so many realities that humans have faced, and is borne of real experiences, faiths, cultures, and politics. Myths are one of the most powerful narratives in mankind’s history, able to withstand the most ruthless force of all, which is time.

The myths we create are a testament to our evolution as people, and we also see Maya’s own growth through the evolution of her notion on love.

What happens is, myths show how humanity evolves. The supernatural myths of ancient times were formed through the zeitgeist of gods and religion, while the myths of today have morphed into modern, economic concerns like the myth of, say, virginity.

The myths we create are a testament to our evolution as people, and we also see Maya’s own growth through the evolution of her notion on love. When Maya confronts the tikbalang in the last act, she also confronts her old notions of love. At that moment, her myth of love was shattered, but  a new one was formed. From chasing after her true love’s kiss in the rain to finally finding unshakeable love for herself, Ulan is a display of Maya’s triumphant evolution as a person.

The closing shot, arguably the most poetic and beautiful scene in the film, is where Maya comes full circle. After experiencing the worst of all heartbreaks, she runs to meet a version of her younger self. They meet halfway, their hands meet, and they smile. Then, they dance in the sparkling, sunlit rain, which has finally taught them all the terrible, wonderful lessons it had wished to impart. They’ve reached the end of the storm, and are finally blessed by the rain with a renewed sense of peace. Maya finds her true love within herself.

They’ve reached the end of the storm, and are finally blessed by the rain with a renewed sense of peace. Maya finds her true love within herself.

In Ulan, rain becomes Maya’s teacher and a parallel for love. Love’s allure to an innocent heart is strangely fascinating, the same way little Maya’s hand was curiously catching raindrops in the opening scene, and the same way the young seminarian Peter was reaching out to feel the rain in his first meeting with Maya. Love is cruel and devastating, the way the merciless storm took away Maya’s true love right as they were about to confess their love to each other against all odds. But what the movie wants to tell us is that, more than the others, love, like the rain, can be the most gentle, forgiving force—especially if you direct it to yourself.

See the trailer of “Ulan” below.

SHAREOn the southernmost edge of the country, Unlabeled Collective is bringing a new...

SHAREOur pop groups aren’t exactly a goldmine compared to the ones in SoKor....