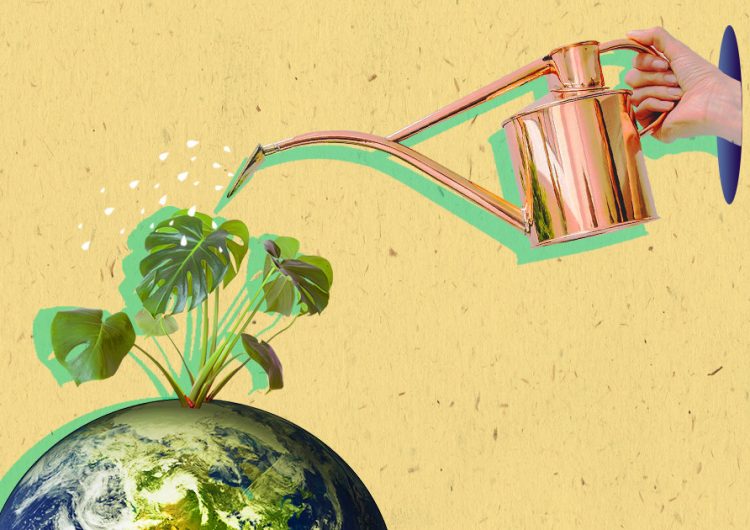 Have you heard the news? The Earth is in pretty bad shape. Climate change has been knocking on our doors the past decade, and it’s lugging along with it a bunch of very scary problems. Coffee is on its way to extinction, temperatures are rising to irreparable levels, and Manila, among many other cities, will be underwater by 2100. It’s about time we pay attention.

Luckily, these celebrities already have—and they’re making damn sure that we don’t meet that fate. Now, if these stars can find time out of their extremely busy schedules to make a move for our environment, I’m pretty sure that us normal folks can too.

I cant wait for tomorrow… sobra ko talagang gusto gawin to! Let’s make sure we have a cleaner Philippines… air, water, and Land! Join us if you can ?? @ria @reefcheckphilippines ???

Enchong has often been vocal about his passion for a cleaner, greener Philippines. He’s been part of clean up drives and has spoken about how to strengthen environment protection legally. He’s even supported the Green Thumb Coalition during the 2016 presidential elections, saying that his president is “the one who stands for the environment, ecotourism and agribuisness. Say no to those who are for deforestation, mining, and (to those who simply don’t) care about our environment.” No wonder we’ve been stanning Enchong since 2015.

By 2050, there will be more plastic than fish in the ocean… unless we do something about it. So come and join us clean up tomorrow ❤️☺️ RSVP to 09612802112 #TrashTagPH #ReefCheckPH

“Nandito po kami para magpulot, hindi po para mag-picture,” says Ria during a clean-up drive she organized with Reef Check Philippines. Aside from being a hands-on environmental advocate IRL, she’s also starred in a Maalala Mo Kaya episode in which her character protests against a mining corporation that threatens to exploit her provincial hometown. We’re rooting for you on and off-screen, Ria!

Read more: This search engine helps you save the Earth, one query at a time

If anybody on the face of this country is busy, it’s president Nadine Lustre. Even with her schedule, she made sure to dedicate an entire afternoon to Greenpeace PH’s anti-plastic campaign. That also includes her precious personal vacation time, where, even on a spa party getaway, she manages to clean a beach bay. And if she’s not cleaning up herself, she’s also not afraid to tell people to watch their litter. She’s got our vote forever.

If you have a phone you have no excuse not to help out. If you have any following at all you can at least share information with even one person and it makes a difference. If you’re a person with a huge following it’s really your duty to humanity to help save us all. @unenvironment #unenvironment #unga

Umbrella Academy‘s Aidan Gallagher, AKA Number Five, plays a time-travelling hero who’s figuring out how to save the world. Looks like Aidan and Number Five have the same goal. He’s been named the youngest United Nations Environment Goodwill Ambassador, and he’s spoken to world leaders about the actions we need to take to fight climate change. He’s also been known to write pretty impressive Instagram captions about environmental facts, and with academic citations, mind you.

Fading Paradise, a self-produced advocacy indie film about climate change. With me, Krystal Reyes, Coleen Perez, Kenneth Paul Cruz, Mark Castillo, Angelo Serna with the special participation of Ms. Alma Moreno. 🙂 Here’s the link of the official trailer: https://youtu.be/eSjog8OOHl0 We are one of the featured films of QCinema this year! Please catch us on these days: 1.) GATEWAY CINEMA 7 on October 20, Friday, 1:30pm 2.) ROBINSONS GALLERIA CINEMA 7 on October 24, Tuesday, 3:30pm 3.) QC Museum Mini Theater, October 26, Thursday, 3:00pm You may also visit our official Facebook page, www.facebook.com/FadingParadise We hope to see you! 🙂 Please share! 🙂

Bea Binene is one to take her environmental advocacy with her own hands. In 2017, she self-produced an indie advocacy film for the environment called Fading Paradise, which tells the story of a lush island in Bohol that becomes poisoned by commercialization. Now that’s a power move. In addition to being an actor-producer with a cause, she’s also a junior ambassador for Haribon Foundation.

Read more: The #trashtag challenge is the only trend that matters

⁣ ⁣ ✅ Customer service skills ⁣ ✅ Product knowledge⁣ ❌ Uniform (glasses kept falling off)⁣ ⁣ To celebrate the launch of @JUSTxAustralia, @c.syresmith worked the floor at @woolworths_au in Melbourne! Tell us how you think he did below ?

Of course, we can’t leave out philosopher, rap star, and environmentalist Jaden Smith off the list. Jaden and his father, Will, started his company called JUST Water when he was 17 years old, but he’s had the dream with him since he was 10. He’d seen a “plastic island” floating in the middle of the ocean during a surfing trip and got very upset about it. Seven years later, He’s making 100 percent recyclable paper and plant-based plastic bottles filled with spring water to avoid just that. No question, Jaden’s just an icon living.

Cha Fonacier knows that people tend to ignore impending gloom and doom, which is pretty much the reality of climate change. So in 2017, she used her comedy character, Kurdapya Jones, and partnered with Sutukil Sauce to create a six-part series on debunking climate change. To quote, Kurdapya has “… made bantay that the klima and the weather are not sakto anymore.” She’s not wrong. She’s here to make (understanding) climate change fun, and maybe Grimes can take a few notes.

If you need any more reason to love the queen SZA, here’s another: She’s a soon-to-be environment-conscious fashion mogul. SZA is set to release a sustainable clothing line of windbreakers and jumpsuits, with a goal to help save the ocean. So I guess she’s a friend of two Oceans? Kidding. Okay but we are hoping her friend Frank Ocean jumps in on the project to maybe design a few pieces himself.

Sad news is she’s deleted her posts about it, and the Ctrl Fishing Company Instagram account is still empty—but of course, the internet has receipts. For now, let’s enjoy this video of her giving us “earth,” “climate change,” and “devastation.” We’ll take that as a call to environmental awareness.