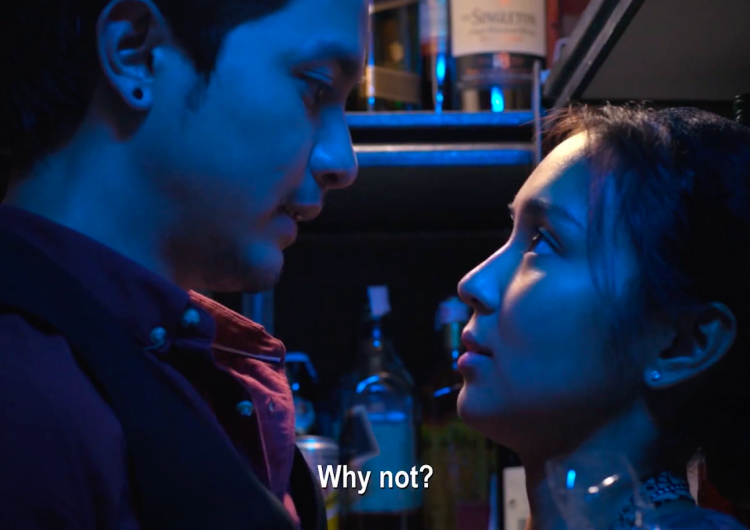 The long wait is over, Kathryn and Alden stans! The official trailer for the upcoming intriguing film Hello, Love, Goodbye just dropped last night. Directed by Cathy Garcia-Molina, this film follows the story of Joy and Ethan, who are both Overseas Filipino Workers (OFWs) in Hong Kong, squeezing all their strength to make ends meet.

Thanks to the trailer, we find out that Ethan (Alden Richards) and Joy (Kathryn Bernardo) will change the meaning of “I love you” in the upcoming romance-drama film.

In a scene, Ethan explains that in the next chance he gets, he’d say “I love you” to the girl he’d want to push away, because saying so would surely freak her out and make her leave. Joy (Kathryn Bernardo) then replies with “I love you” and a stunned Ethan says he doesn’t love her back. Based on the current psyche of Ethan, that means he wouldn’t leave her.

Hello, Love, Goodbye is the first project of Kathryn Bernardo and Alden Richards as a pair. Although they’re coming from different prominent love teams, they look promising together—tbh, we must admit we felt the kilig just by watching that short trailer. After all, wouldn’t we want our idols to grow individually? It’s quite exciting knowing that we wouldn’t be always stuck in our love team culture.

If you’re not yet convinced that a great story can be told even outside their respective love teams, take a glance at these local films in the past years. Here are six Filipino films with love stories led by fresh, unexpected tandems.

For the past three years, we’ve been seeing Julia Barretto with her onscreen partner Joshua Garcia, while Gerald Anderson has grown out of the love team formula after Kimerald. Then, Between Maybes came into the picture, pulling the two actors out of their usual zones. In this film, Hazel (Julia) visits Japan to take a break from her chaotic, frustrating showbiz career. Then, she meets Louie (Gerald), a fellow Filipino. Gradually, they find comfort in each other.

Read more: Julia Barretto: The star in the stars

In So Connected, Jameson Blake and Janella Salvador delivers an affective portrayal of two young people dealing with the complexities of the getting-to-know stage. It starts when waitress Trisha (Janella) buys a phone from a black market seller. One day, Karter (Jameson) uses a media-storing app to spy on the phone’s buyer, who turns out to be Trisha. The story strikes a balance between a source of kilig and an avenue for lessons on social media usage.

Read more: Jameson Blake is a made man

Saving Sally is one of the gems of Metro Manila Film Festival 2016. 12 years in the making, this film is a breathe of fresh air starting from amateur comic book artist Marty (Enzo Marcos) and gadget inventor Sally (Rhian Ramos), the pair that beat the odds (and monsters) in their live action-animated world.

Based on the Palanca award-winning musical, Changing Partners tells the progression of the romantic relationship between Alex and Cris, but in four variations. Narrated in changing gender pairings, watching this film feels both a curse and a blessing as it unapologetically unfolds the pains of a dysfunctional relationship, but showing how letting go molds our growth as individuals.

I’m Drunk, I Love You

Maja Salvador and Paulo Avelino was the tandem we didn’t see coming, but with how I’m Drunk, I Love You meddled with our unbothered feelings, the pair proved to be powerful enough to be invested in. This JP Habac rom-com is the story of every confused young adult who finds their feelings going deeper for their best friend. Paired with beer, bagnet, university life, and some nostalgic aesthetic, this film feels like home in another way.

Of course, who would forget our President Nadine Lustre’s artistic portrayal of free-spirited, introspective Maya? Injecting magic realism in the storytelling, Ulan is a coming-of-age story that follows Maya’s path to (re)discovering the meaning of love, with Peter (Carlo Aquino) as an important agent in the process. Add in some tikbalang and the spell of rain, you wouldn’t even notice that these two main characters originally come from their own known love teams.

You can catch these films on online streaming services and your local microcinemas.

SHAREQCinema’s wide array of films are almost intimidating to look at. Digitally restored...