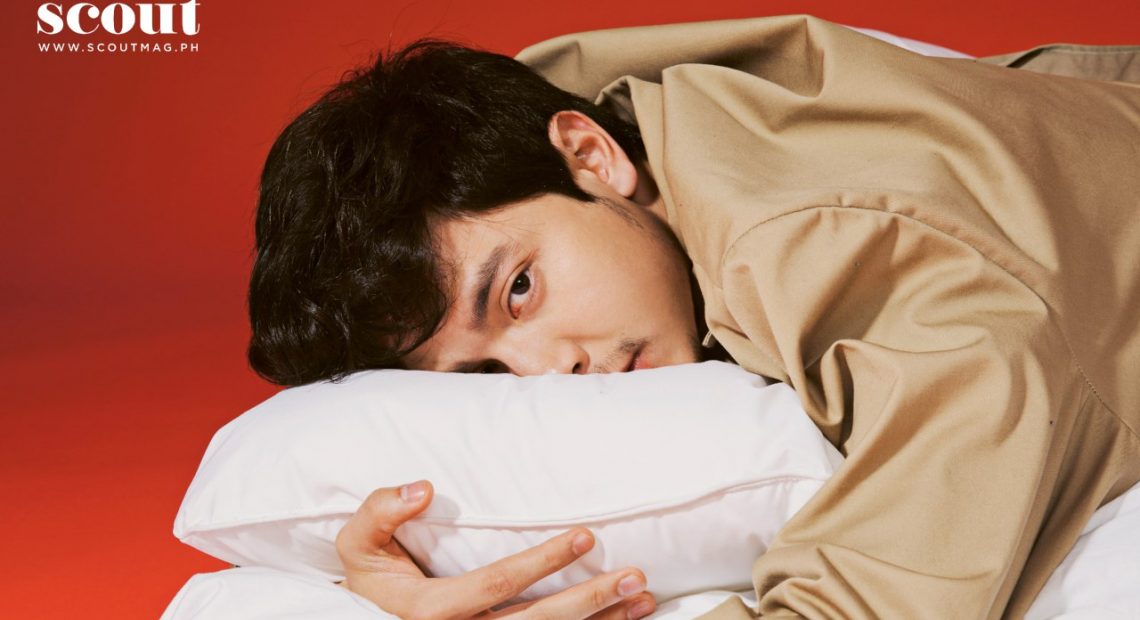 Alden Richards has reached singularity. He’s all over the news, not as AlDub or half of a portmanteau bearing the chains of an onstage/offstage relationship. Not even as Pambansang Bae, subsumed into a relationship, but simply as himself, Alden Richards, the 27-year-old Seoul Drama Award-winning, leading man of the highest grossing Filipino film ever.

The uniquely Filipino phenomenon called the love team has a long history in the local industry. Mary Walter and Gregorio Fernandez were the first romantic film pairing, back in the ’20s and ’30s when films were still silent. A century later, studios still adhere to this formula, a testament to the enduring romantic hopelessness of the Filipino audience. 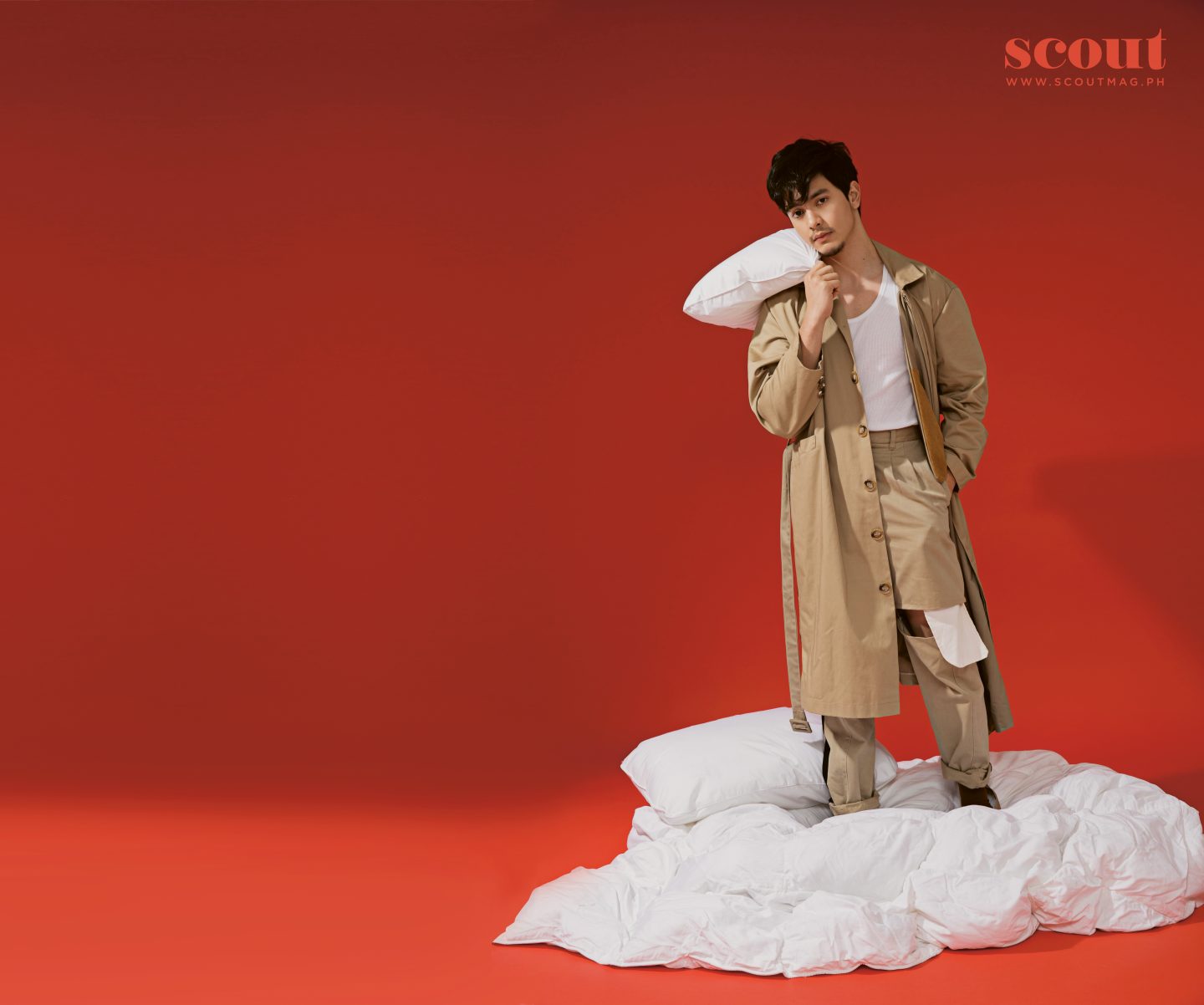 Coat and pants from Proudrace

Enter “Hello, Love, Goodbye,” a movie that took considerable risks with its lead cast but has since raked in more than P880 million worldwide with its timely portrayal of a young OFW couple living in Hong Kong. Kathryn Bernardo was hot off the heels of the highest grossing Filipino film “The Hows of Us,” her seventh with real-life partner Daniel Padilla. Alden, meanwhile, had just finished a post-apocalyptic TV movie for GMA called “The Journey,” and has been indelibly linked to Maine Mendoza since their “Eat Bulaga” pairing catapulted them to insane levels of stardom in 2015. Pre-AlDub, Alden was not yet a household name but he already had the makings of a serious actor, after winning an award for his turn as Jose Rizal in the TV series “Ilustrado.”

“It was a risk for Kath and [me]. We all took that risk. But it shows you don’t really have to be in a real relationship to make the scene work,”

Actors each from different networks and different loveteams, with their legion of intensely loyal fans, what’s not to fear?
“It was a risk for Kath and [me]. We all took that risk. But it shows you don’t really have to be in a real relationship to make the scene work,” says Alden, who shows up at the Hinge office in sweatshorts and a gray James Perse T-shirt. He’s boyishly good-looking, a quintessential leading man minus the dark side.

“Hello, Love, Goodbye” struck a chord with audiences because of its relatability, open-endedness, and treatment of OFW concerns. “The writers and researchers picked stories from different people and put them together, that’s how we did the movie,” he says. “It’s real; this is what happens in real life.”

“It’s real; this is what happens in real life.” 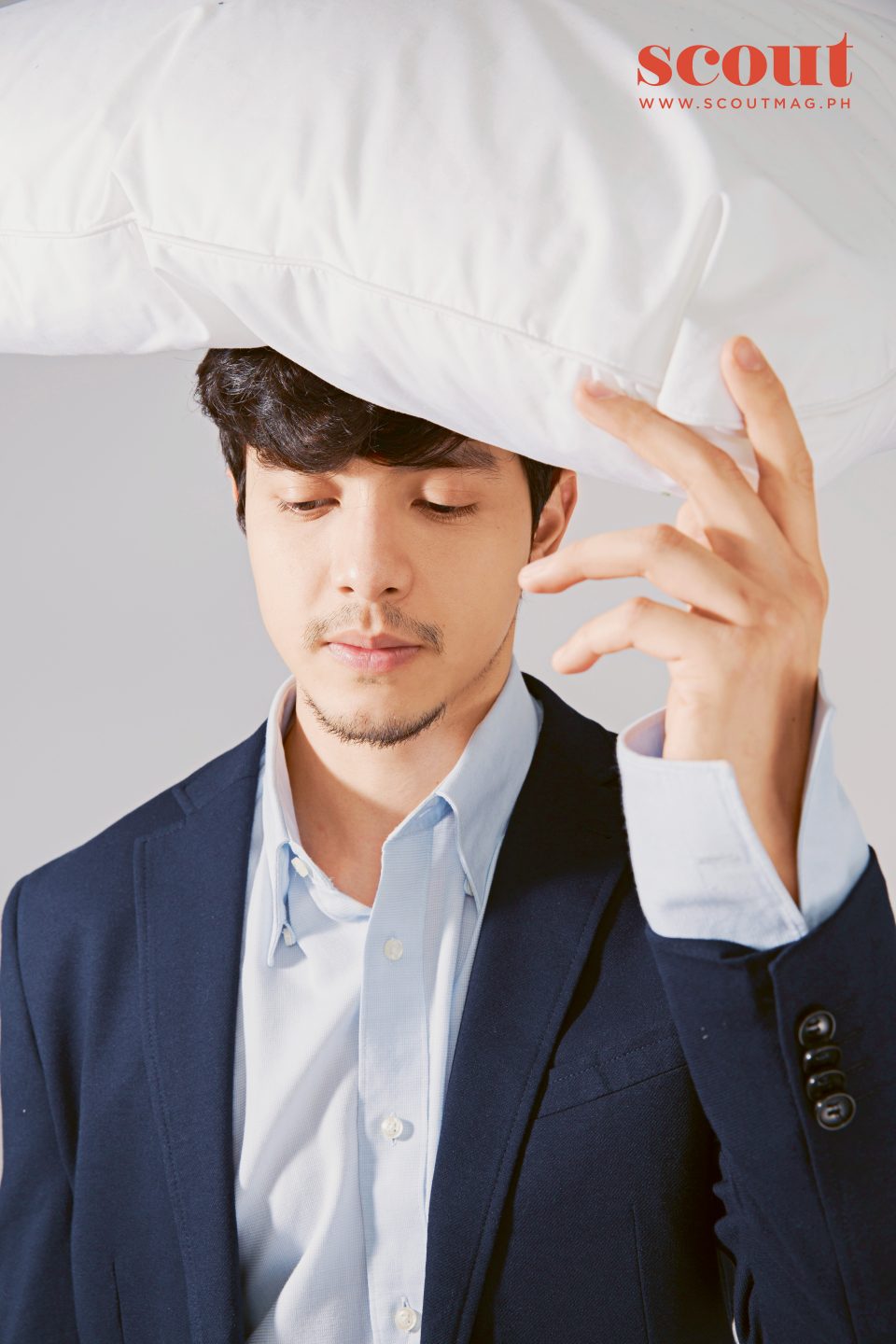 In real life, Hong Kong has become more than just a place where “no one stays forever,” as Kathryn’s character narrates in the film’s opening sequence. Ninety-five percent of the film was shot in Hong Kong, and just a week after they packed up the set, its citizens erupted in protest against the government. The team couldn’t return to attend the screening due to the instability of the situation. “It really saddened the team, we wanted to be there during the screening, to thank our Filipino counterparts who helped create the movie,” Alden says. “Of all places, Hong Kong should have been the priority.”

He just came back from Cambodia, where he was surprised by the number of non-Filipinos who attended the screening. “They’re really just fans of romantic genres.” Perhaps there really is a wider market for our uniquely Filipino love team phenomenon.

Alden is currently shooting the first few episodes of his newest primetime series, “The Gift.” After starring in the fantasy series “Victor Magtanggol,” he was hankering for a meatier comeback role. “Heavy drama is my comfort zone,” he says. “Mas na-fi-feed ’yung soul ko as an actor.” “Heavy drama” seems to be a genre particular to our industry. Of course, tragedy abounds in television and cinema all over the world, but we certainly have elevated suffering to a high art.

“Heavy drama is my comfort zone,” he says. “Mas na-fi-feed ’yung soul ko as an actor.”

“The Gift” premiered mid-September on GMA and has no shortage of tragic characters mired in unfortunate circumstances. Alden plays Joseph, who, in a failed kidnap attempt in Quiapo, ends up getting separated from his wealthy family as a boy. He is adopted by Strawberry, a fruit vendor with dwarfism. Sep then gets blinded in a gunfight but wakes up with the gift of clairvoyance, which his stepbrother, a political aspirant, uses to his advantage. To make things worse, Sep and his mother lose their livelihood.

During his immersion with a community of the visually impaired—including 30 minutes of walking with a cane while blindfolded—Alden learned that those who are born blind and those who lose their eyesight later in life go through different experiences. “It’s challenging to have gone blind. When I interviewed them, I felt their sadness, but most of all I felt their hope. [They were asking], ‘what can I contribute to society after being blind? What else can I do?’”

It was serendipitous that Alden had also just released an athleisure collection with fashion designer Avel Bacudio, who underwent surgery for retinal detachment. Emerging from three days of darkness, Avel began to see spots of color. “When they removed the bandage, he first saw maroon, which were the blood clots. Slowly he would see more colors, blue, then green. Every aspect of the collection has meaning.” The first hues that returned to Avel formed the palette of the collection, which was primarily designed by Avel but inspired by Alden’s taste in tracksuits. Avel’s experience with sightlessness moved him so much that he has dedicated a portion of the proceeds to the Northern Luzon Association for the Blind, to help with the education of blind children in Baguio. 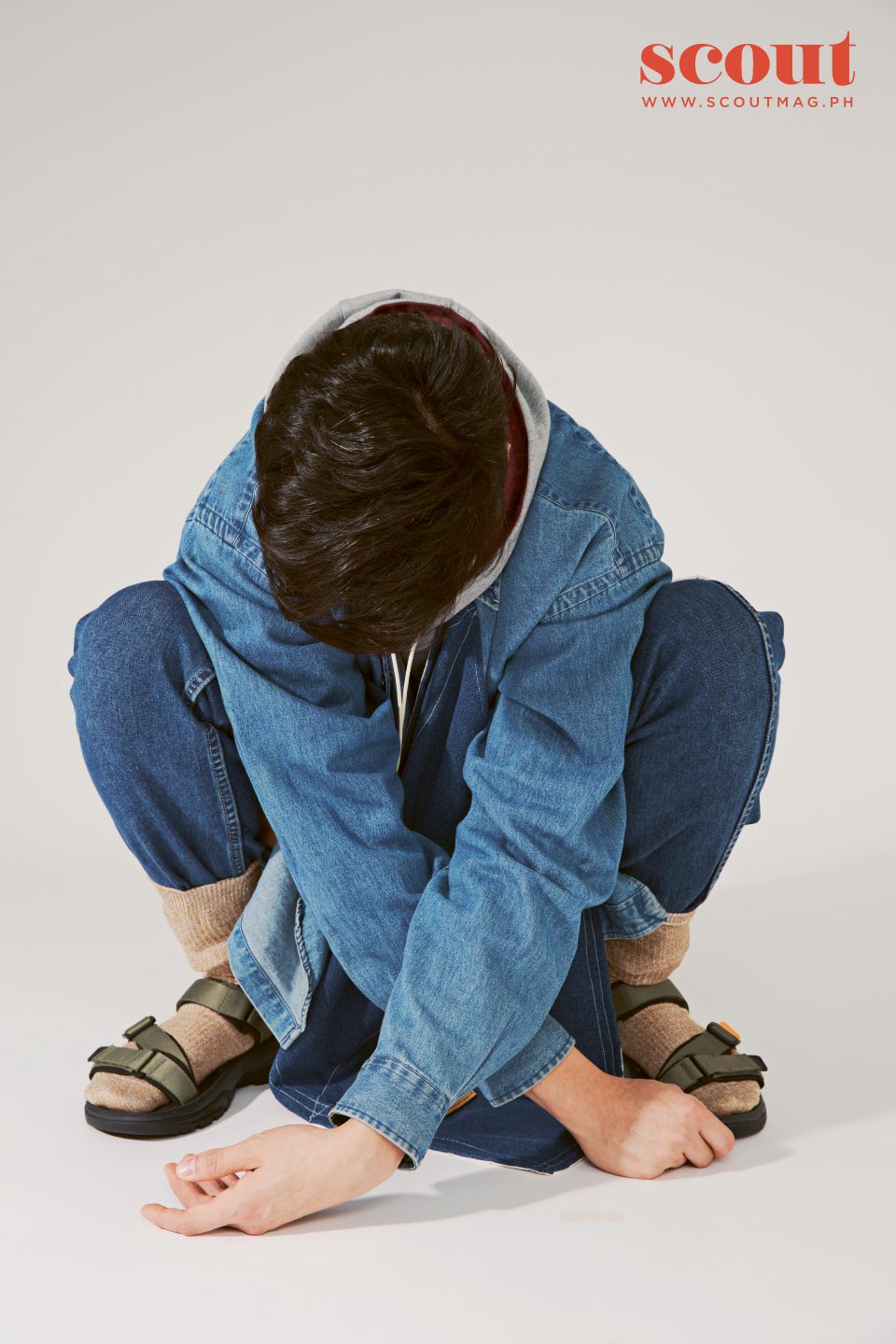 Alden considers his role in the entertainment industry a service to others, but this view developed over time. “At first, it was a dream of my mom’s,” he says. “I wanted to be part of this industry for the money. We were not rich, my dad resigned from his job, and mom died. Eventually, project after project, I fell in love with the craft, with telling stories to an audience. The most rewarding part is when you meet people, and they tell you, ‘you inspire me, you changed my life.’”

“It’s not just a job. I would really, really like to be part of those changes in other people.”

Alden, too, has gone through some rough times, so he knows what it’s like to experience failure. His initial forays into showbiz were frustrating, but he believes that he would not be the person he is now if it weren’t for those rejections: “My faith, my family, my dreams kept me going.” 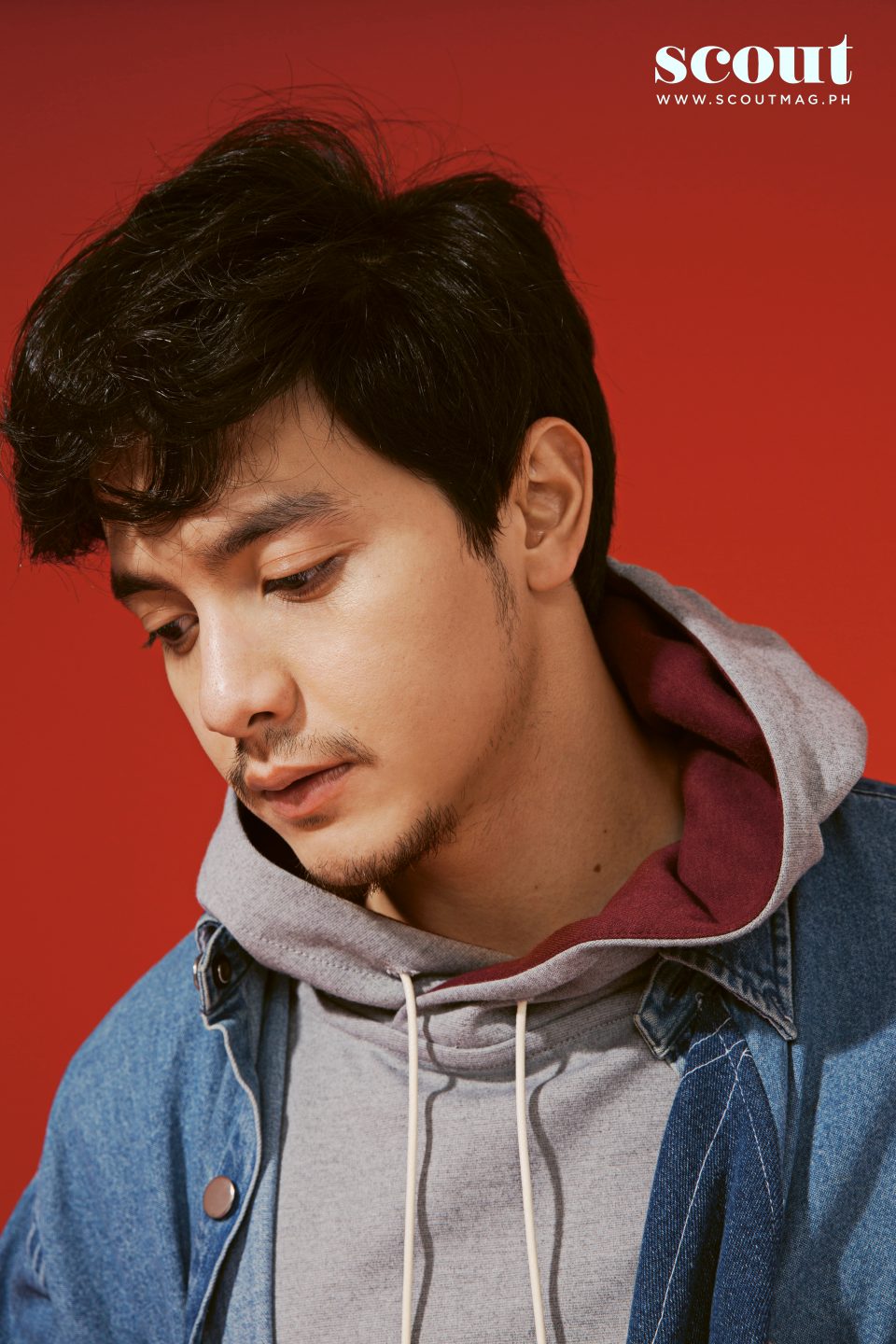 Don’t be surprised if Alden Richards eventually becomes an international name. He’s set his sights on international projects. He’ll take on challenging, unconventional roles—one of his favorites was playing a wordless psycho killer in the horror film “The Road” (“I look forward to those kinds of movies, it saves me from memorizing a huge amount of lines”), and characters who are completely different from him (“Ethan [his character on HLG] was so not me—a happy-go-lucky playboy”).

But when asked what exactly Alden’s opposite is, he hesitates to answer. “The worst: an extremist, doesn’t care about what people think or need from me, selfish. I really can’t imagine the opposite of me, and thinking about it now makes me uncomfortable.”

People who have worked with Alden have nothing but respect and admiration for his good nature and polite behavior, and, for him, being the “good guy” is nothing to be ashamed of. “These people,” he says, talking about his team, “have been with me for the longest time. They know me, and I don’t think I’m going to change.”

This is good news for all fans of the singular Alden Richards, who could have played it safe but didn’t, who could’ve lost his soul but hasn’t—because he, too, wouldn’t want to change a thing.

#AldenforSCOUT will be available in select National Book Store and Powerbooks branches soon, but you can get first dibs tomorrow, Oct. 12, at #SCOUTCreativeTalks. Click here for more info.

It’s not a “Crazy Little Thing Called Love” sequel, but we absolutely want...