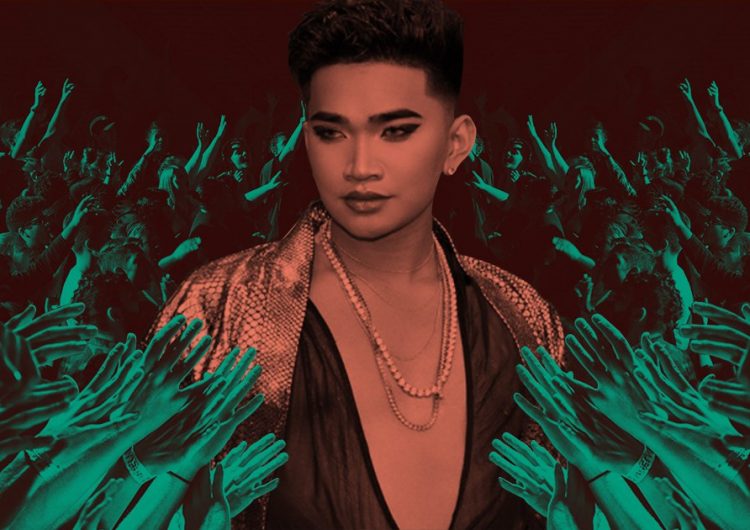 Real talk: Even people who claim complete and absolute apathy for famous people has that one person they would want to at least have a commemorative photo with. Or, you know, maybe not–if you want to be pretentious about it. I’m just trying to set up a possible scenario from which you can derive some level of understanding towards these crazy ass fans brazenly asking for selfies with internet beauty guru Bretman Rock during a very private moment with his family. Though I suppose it’s futile to try to find common ground because honestly that amount of gross entitlement is near impossible to grasp.

Imagine the balls it takes to go up to an actual person and pull an insensitive stunt like this. Yet here we are with stories like Tony Goldwyn from “Scandal” getting licked on the neck while taking a fan photo and Mac Miller fans taking the time to harass Ariana Grande to the point that she had to deactivate her Instagram comments. With Bretman having to tweet a reminder for people to have basic respect, this is one more notch on the belt for crazy stans.

Can people just let me be sad for onces…. I’m here in the Philippines for my dad who just passed, don’t come to my house and ask me for pictures.. so many people showed up to my dads funeral uninvited and started taking pics of my dad and my family..

Seriously? You don’t need high EQ for this one, folks.

So today, from a large truck’s length away, I’ll piece together the logic behind people who have the empathy of one whole seedless grape. A long shot but let’s try, shall we?

I’m going to start out with some data because only science can help us begin to understand the thinking process behind these aberrant behaviors. Like how science explained this lil badger burying a whole ass cow for a week. The world’s a scary place. And if you’re a toxic stan, congrats for contributing to that fear.

…fans often associate themselves and their self-confidence with their fandom of choice.

According to the study “Costs and benefits of allegiance: Changes in fans’ self-ascribed competencies after team victory versus defeat” led by psychology professor Ed Hirt and his colleagues, fans often feel like the thing they actively support is associated with how they view themselves. Fanaticism is a gateway to a self-esteem pool of sorts.

These findings are further supported in a more recent study published in the Psychology of Popular Media Culture, where researchers Groenne and Hettinger found through case studies on “Twilight” and “Harry Potter” fan communities that fans often associate themselves and their self-confidence with their fandom of choice.

Much like how flat-earthers, anti-vaxxers and even sports team fans clump together with their fanatic hive mind mentality, stans feel like extensions of the community. This empowers them to act as an individual under a much larger banner.

They aren’t a mass of content-creating pixels. The sooner stans realize this, then the sooner they can start to see themselves as more than an extension of someone else’s identity.

If you lurk the interwebs through Instagram, YouTube or Tumblr, toxic stan culture can often come as part of the territory. On Twitter though, stan culture feels like 90 percent of the whole plot. Choose your fighter from cancel culture to call-out culture, from clout mentality to mob mentality and the list goes on and on until it’s 4 am and, whether you wanted to or not, you now suddenly know the entire history of the James Charles-Tati Westbrook issue almost a year after it died a sensationalized death.

This is because nothing really dies completely on the internet. All of the flame wars, problematic comments and name dragging make for an endless scroll of internet drama. Accidentally getting yourself in the middle of an issue you know nothing about through trending hashtags is also a common occurrence for Twitter denizens. This makes stan culture all the more easy to corrupt with toxicity.

so sick of toxic stan culture. not normal stan culture, there’s a lot of love and support there.

i don’t get it

…take that human behavior and make it into a culture, a career even, of constant sharing then that is a recipe for some very delusional ideas being normalized.

You grew up with them as you spent time enjoying their content through the years. You might have even helped them grow in turn in the form of a faceless like, comment or share. You know their stories, from the really good to the really heartbreaking. Since they’ve been so forthcoming with their lives, it reaches a point that their privacy starts to be perceived as a form of selfishness.

Entitled fans aren’t anything new per se. The idea of stalking celebs has been a thing for as long as the idol status itself has been a thing. But take that human behavior and make it into a culture, a career even, of constant sharing then that is a recipe for some very delusional ideas being normalized.

As crazy as it all sounds, you can’t help but wonder what kind of behaviors are being promoted by social media. Don’t “ok boomer” me yet. Hear me out: If fan culture has been observed by psychologists as a need to belong and self-affirm, then the creation of overzealous stans might be a symptom of a greater system of desensitization and detachment online. Simply put, people start to forget that those faces they idolize behind the screen are also human. They aren’t a mass of content-creating pixels. The sooner stans realize this, then the sooner they can start to see themselves as more than an extension of someone else’s identity.