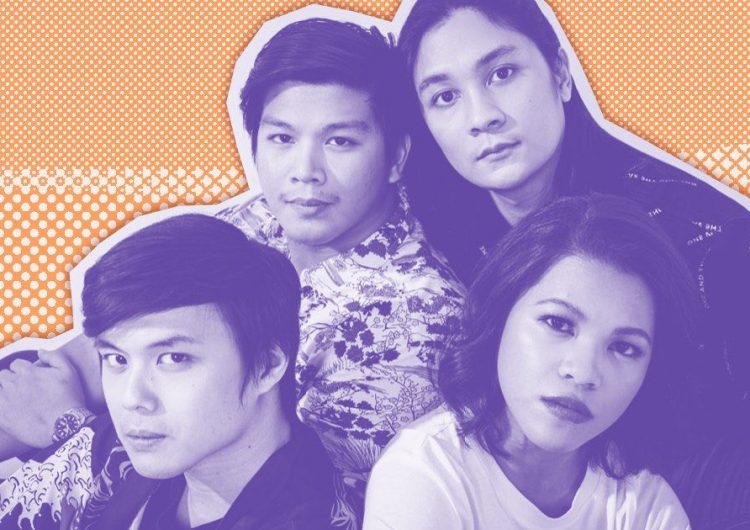 Fairy lights, bean bags, and street food made for a chill get-together at Over October’s listening party for their debut album. The pop/alt-rock band gave us an exclusive listen to their unreleased album last Nov. 14 in a closed off gathering with dedicated fans, close friends and unlimited snacks—the university street food trinity: fishball-pancit canton-sorbetes. A fitting ambience for the soundtrack of our next coming-of-age daydream.

Despite some tracks being released as singles, all of the songs were produced with a coherent experience in mind, with each one meaning to flow next to each other in this album. “The curation process starts when we’re trying to write it and arrange it pa lang” drummer Janessa Geronimo candidly explains.

Frontman Josh Buizon adds, “When we sequenced the songs, that’s more when the thinking came in din which songs would make it…we thought more of the sequence of the songs in the album, more than what songs [individually] would make it into the album.”

The album as a whole culminated a four-year process that captured their current sound—feel-good music shaped by a nostalgic quality reminiscent of mid-2000’s pop era. But when asked about whether they’re trying to pin down or explore a specific type of sound, lead guitarist Josh Lua says, “It’s [just self] expression. Which is good [because there’s] less pressure to stick to our own sound.”

To which frontman Josh explains, “Nasa state pa rin kami of trying to introduce ourselves than to make an album na ganito yung theme. It’s more of, nagsulat kami ng album to let people know how Over October sounds.”

For dedicated fans who continue to follow them across gigs, keep your eyes peeled for 2020 because Over October wants to meet you halfway. Even better, they’ll have “physical stuff you can bring home”.  Get ready to fall in love during their tour because Janessa succinctly captures the overall feel of their debut by mentioning the vibe as, “The soundtrack of their last dance.”

Over October’s debut album will be dropping very soon along with another surprise bonus track, so don’t just take my word for it and listen for yourselves—preferably during a long drive mid-afternoon with the girl of your dreams.

Read more: Hold up, Iñigo Pascual is working with Prettymuch and NCT Dream

SHAREThe streaming war between Nickelodeon and Disney+ has just gotten even more heated....

SHAREHave you ever found yourself in the verge of frustration as your skincare...