For the locals and the folks that flock to Cebu every January, the Sinulog Festival is a lot of things: A celebration of culture and history, plus a totally valid reason to party for a whole weekend. As the Queen City comes alive, there’s not one spot in Cebu that isn’t ready for a good time—and we’re here to give you a rundown of all the best parties to drop by.

Scrape a knee, have a lollipop or two and dance with the child in you. This Sinulog Friday, the world is your playground. #letsplay #sinulog #musicfestival #LifeDance #BMF2020 #sinulog2020 #baladhay2020

A post shared by Baladhay Music Festival (@baladhaymusicfestival) on Dec 2, 2019 at 4:55am PST

When it comes to Sinulog weekend, nothing beats a good ol’ music fest. To kick off the festivities, Baladhay Music Festival features a lineup of iconic acts and some new faces, with the likes of IV of Spades, Pedicab, and Cebu-based acts Mandaue Nights and Sepia Times. Baladhay is happening on Jan. 17 at City De Mare, Cebu City. General Admission tickets are P1,500 each, but if you’re willing to splurge for the night, VIP passes are P2,500 for VIP Standing, P50,000 for VIP Table for 10, and P75,000 for VIP Lounge.

If you’re still living on a Baladhay high the next day (or if you missed it and need to play catch-up), get an indie fix at the PLAZA sessions on Jan. 18, to the sounds of Unique Salonga, Autotelic and Mandaue Nights. Held at the historic Plaza Independencia, the event is a fusion of the past and the present—much like Sinulog itself.

Read more: What most Filipinos should know about Sinulog, according to Cebuanos 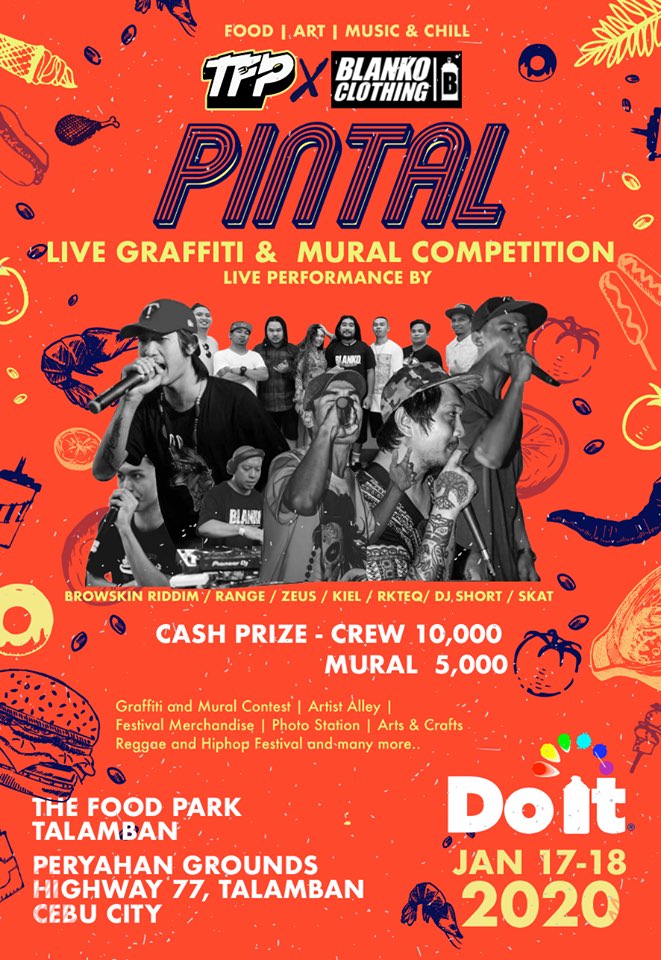 Art? Food? Music? Tick all the boxes at Pintal, a free two-day fest with a live graffiti and mural competition, topped with reggae and hip-hop beats on stage. Plus, you won’t run short on grub. It’s all happening at The Food Park in Talamban, Cebu City on Jan. 17 to 18—so really, you’re all set.

When making your way to Cebu, pigging out on food is pretty mandatory. If you want a taste of that famous lechon, drop by at Sugbo Mercado’s pop-up feast at Cebu Business Park from Jan. 17 to 19.

Don’t let names deceive you, this isn’t the trainwreck made infamous via documentary. For those into the great outdoors, DJ sets and rappers like Shanti Dope, Sinulog Fyre may be up your alley. Happening on Jan. 18 at City Times Square Open Parking, Mandaue City, tickets cost P900 for General Admission and P1,500 for VIP.

Because 2023 is all about self (virtual) love