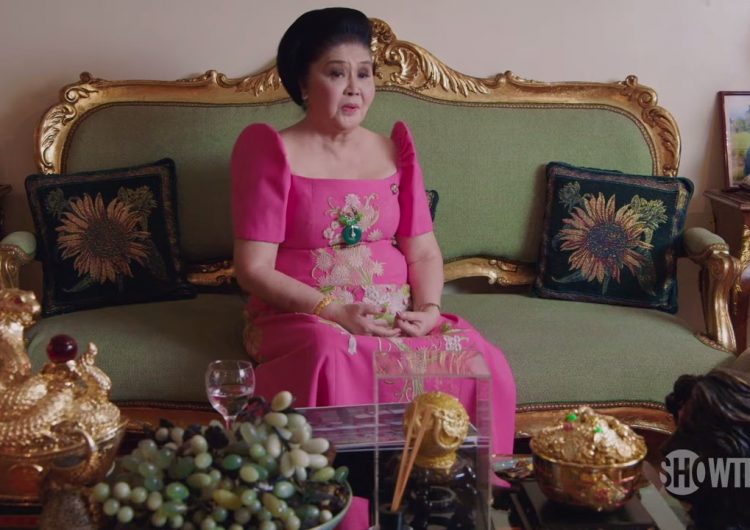 “The Kingmaker” will premier in the Philippines on Jan. 29 at the CCP Little Theater at 7 p.m., with a matinee screening at 3 p.m. There’s also a talk set to happen after the screening with a representative for the film as well as guests from various sectors.

The chilling documentary follows the former First Lady’s unabashed pursuit for both opulence and power, even decades after Ferdinand Marcos’ ousting in the ‘80s. It includes revealing interviews with Imelda herself, her son Bongbong Marcos, current Vice President of the Philippines Leni Robredo,  and human rights violation victims during the notorious Martial Law.

“Perception is real, and truth is not,” Imelda Marcos quips in her home while surrounded by lavish items, including Picasso and Michaelangelo pieces. The film chronicles Imelda’s role in her son Bongbong’s attempt at the vice presidency and how they used the Marcos’ ill-gotten wealth to regain power.

It’s ironic that the film’s debut will happen at the CCP, which was first initiated by Imelda 50 years ago to become a beacon of arts and culture. Although its roots are tied with Imelda’s, they emphasize that they have transformed the institution into a people’s arts center, where decentralized art and important democratic discussions can be held—one of which is the discourse sparked by works like “The Kingmaker”.

The film is a sobering reminder of how democracy is always on a perilous balance, and how we can’t let historical revisionism place corrupt people in power ever again. Even Greenfield herself labels the film as a “cautionary tale,” and we can’t help but agree.

Watch the trailer for “The Kingsmaker” below:

If you're a fan of what Senator Risa Hontiveros has been doing, then...

SHARESo many are convinced he is the last hope for the Philippines. Very...

SHAREThat’s right ‘90s kids, our childhood prayers have been answered—finally.  “The Legends of...