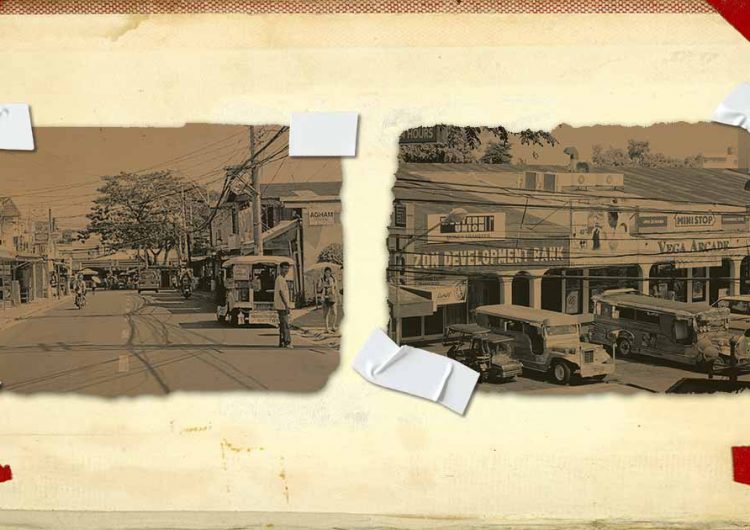 Fourteen years ago, I would have described Santa Rosa as green. Fields overran cement by a mile. Air was light. All space. Quiet.

These days when I ride the bus going home to Laguna every Friday, the noise I hear daily in the gray of Manila seems to follow  me back.

Now, Santa Rosa reminds me of red. Where did this traffic come from? I go back to my memories of seven years ago, when a 10-kilometer distance was a 20-minute drive. It takes almost an hour now, especially on bad nights like a Friday payday. I stare at the backside of dozens of cars during that hour, their taillights an angry, bright red. On the Sunday nights I return to my rented condo in Manila—I never can call it home—the same joyless view greets me.

Where did all this come from?

If you ask me when I think it all began, I’d say it was in 2008. A major land developer had just opened a landmark al fresco mall in our quiet city. There was a giant, man-made lake and shiny, fluorescent blue food chains standing around it, so shiny and… way outside my fourth-grade budget. It felt glorious, for a few fleeting years.

In the 11 years since, those blue food chains were replaced by browns, then reds, and were accompanied by new yellows, whites, and greens. Businesses came and went in a blur.  I can’t remember all their names anymore—just the color of their bright, blinding headboards. I felt each one’s frantic race for survival then, and it continues until now. I had never quite witnessed anything so vicious in my home before.

I had never quite witnessed anything so vicious in my home before.

I watched those lights and buildings grow and grow. By 2011, there was as much cement as there were trees. Just a few years later, a second phase popped up to its left. Some time right before I turned 18, a third phase rose out of nowhere behind it. This one had a cinema—the first one that was closer than two jeepney rides from my home. I remember this as the first time I felt a strange pang of unfamiliarity in the city I’d spent my whole life in.

During this time, I was beginning to live back and forth between Santa Rosa and Los Baños for my undergraduate degree. In the small town of College (yes, this was its legal name), the artisanal coffee shops and yoga studios managed to keep away for a while. I lived off freshly cooked meals from Tita Cora’s and Kuya Dhenzmer’s and, on very special occasions like aced exams or emotional breakdowns, splurged on a ₱150 meal at the sole Korean restaurant in the area.   My heart found solace there, and suddenly I had two homes.

It was also around these years that the word “gentrification” started being thrown around. It was a clinical-sounding term, one my professors obsessed over and one I did not have much interest in. But the word kept popping up, from bolded subsections in handouts to class presentations to lunch conversations with my friends.

Gentrification seems to go by many names. Depending on who’s talking about it, the label can be as damning as colonialism.

Some have even called it new-age colonization. “The opposite of gentrification isn’t urban decay; it’s the democratization of urban space,” says David Madden in The Guardian. Inequality can be glaringly evident in developing a land, and considering the Philippines’ track record of corruption, the wealthy tend to be prioritized—many times exclusively—over the poor.

Read more: Here’s the state of the nation as we know it

Take Sitio San Roque, for instance. It is a community that, at its peak, was home to 17,000 families and had developed its own ecosystem after decades of existence. In 2009, plans for the Quezon City Central Business District were finalized in a public-private partnership deal between the QC government and a major land developer. Just like that, the people of San Roque began to be violently coerced into leaving the sitio.

“The high-rise construction is happening left and right. Whenever you see one, you will just imagine there have been people who have been displaced,” says urban landscape expert Prof. Hazel Dizon to Channel News Asia. Democracy, it seemed, was sold—at the price of over hundreds of thousands of lives forced by violence into an internal displacement.

The government and conglomerates use more euphemistic labels like urbanization, development, and revitalization, even. “Progress” is the label that’s most questionable.

In situations like this, the government and conglomerates use more euphemistic labels like urbanization, development, and revitalization, even. “Progress” is the label that’s most questionable.

It’s raising rent to get the privilege of living in safer, more patrolled buildings—because only people with money deserve protection.

Progress, according to the definition of businessmen, is plunking one big-box supermarket in a rural community in competition with four generational mom-and-pop groceries, eventually running them out of business. It’s raising rent to get the privilege of living in safer, more patrolled buildings—because only people with money deserve protection.

“Progress” was edging non-profitable people out. Where does this leave the 21 percent of the population living below the poverty line?

It boils down to the question: Who is this development for, really? On one hand, the economy grows. On the other, long-term, low-income residents are alienated (to say the least). Is this supposed to be a case of the age-old question: Do we consider the needs of the many, or the few? Of course, this is not an issue of pulling a hypothetical train-track lever to run over a kid or kill a trainful of people. It’s real lives.

In Los Baños, there was nanay who sat every day at the corner of a chicken inasal place, selling candy and pasalubong items. I don’t see her around anymore after the chicken place was replaced with a concrete, air-conditioned restaurant. Maybe they thought street vendors were unsightly.

There was also the small key duplicator’s stall in the old commercial complex by the university gate. I had most of my dorms’ keys duplicated there during my stay, and beside it was a quiet handyman who saved quite a few of my umbrellas. When I came back to visit this year, they were gone. Now a Starbucks is in their place. They probably couldn’t afford the rent next to it.

I can feel the simmering air of possibility, fueled by indignance, courage, and most of all, hope. Greed is a terrible enemy, but maybe it isn’t undefeatable.

Is this all progress or alienation? Can we blame businesses for trying to make a living—and do we really have a choice but to play the game of capitalism? Only privilege can allow someone to say no. Still, I have seen the businessman’s progress in too much of Metro Manila and now I fear for the future of my home.

Read more: What we discovered upon visiting Waiian’s creative space

But progress, real and inclusive progress, is still out there.  I see it in the pen strokes of creators who’ve had enough. I hear it  in the voices of the youth who revolt in the streets against power. I can feel the simmering air of possibility, fueled by indignance, courage, and most of all, hope. Greed is a terrible enemy, but maybe it isn’t undefeatable.

Metro Manila has ancient beasts, much more ruthless than what we have in Laguna, which is at a crossroads. Will this development be democratic, or will it become a carbon copy of the view from my rented Manila condo—the one I can never call home?

It is frightening, though, how powerful—and wicked—money can be. Metro Manila has ancient beasts, much more ruthless than what we have in Laguna, which is at a crossroads. Will this development be democratic, or will it become a carbon copy of the view from my rented Manila condo—the one I can never call home?

As the elite hold the dice so casually in their hands, we toil each day and wait—in a sea of angry, red tail lights.

SHAREThis is it, pancit. We’re finally down to the last day of this...

SHAREThanks to Twitter, the quarantine saw the age of a gazillion Picrews. Now,...