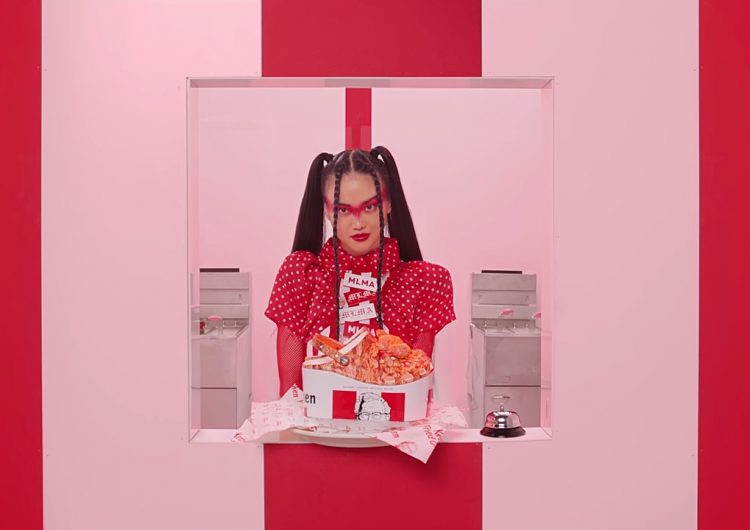 Aside from its finger lickin’ good chicken, KFC is also known for having the most left-field marketing efforts to date. They’ve made a streetwear line, a washable bucket hat, and most peculiarly, an RPG dating simulation featuring a bachelor Colonel Sanders. Now their latest addition to their colorful promotional efforts is a capsule footwear collection with Crocs.

KFC debuted the new merch at the recent New York Fashion Week with a video featuring—you probably never would have guessed it—MLMA, also known in the Instagram world as Me Love Me Alot. The artist is known for her hand painted, maximalist graffiti-style clothing designs (favored by Billie Eilish herself), and also for her MLMA-clone-filled IG videos.

The debut video imagines MLMA as a crimson-clad fry cook at a KFC kitchen. She receives a tape receipt for an order on a prompter, and then proceeds to deep fry something delish. She sets a timer and waits til the bell dings, and then pulls out her creation for serving: a pair of flat platform Crocs, adorned with a few Jibbitz charms shaped like little KFC Chicken leg parts. It really doesn’t get any campier than this.

If you’re curiously attracted to getting a pair for yourself (because we kind of are right now), the classic clogs will be up for sale at $60 (P3,028) in the coming spring season. Unfortunately, MLMA’s sky-high pair will not be retailing for the public.

Still from “KFC x Crocs. Not for human consumption.” video

SHAREWith the COVID-19 pandemic, to say that the world is in bad shape...