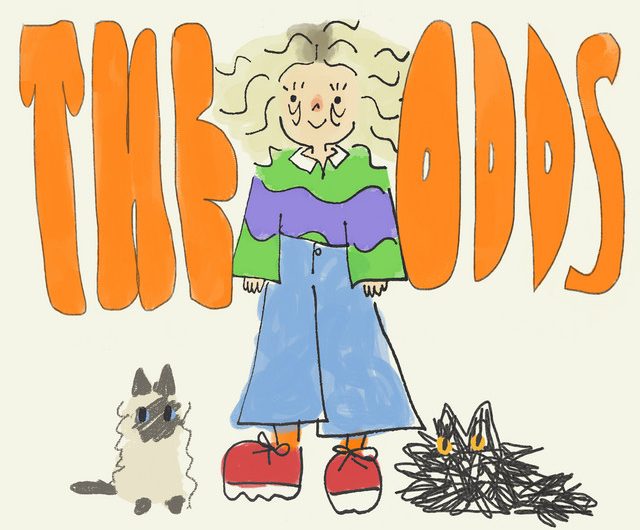 Picture a slow-moving daydream with welcome, sepia-colored tinges of nostalgia and hope—that’s what comes to mind when we listen to indie alt-pop artist Ruru’s first offering of the decade, “The Odds”.

The project is a five-track record from Denice Quimbo, known also by her artist name Ruru. “The Odds” is her third full-length project, with the previous ones, “Sleep” and “Far Out” having been released back in 2018.

Her new project is chock-full of gauzy synths, velvet harmonies and ambient texture. No second is left undone, each all filled with an aural puzzle piece. As a holistic experience, the tracks on “The Odds” fall into the next with the soft click of a tape player, like a reminiscent conversation weaving from memory to memory. No matter the woeful subject matter—from slipping long-term friendships to feeling lost—the melody always provides comfort in the end.

We picked Denice’s brain about the process behind “The Odds” and her growth as an artist post-release. Read on for her thoughts, plus a song recommendation we’ll be sure to check out.

How long was “The Odds” in progress? Could you tell us about the moment when you knew that you had it finished?

3 years. Or 2 years and a half. I’m not quite sure. I’m an impatient person—there were times in between songs where I wanted to just drop it to let it go already. But I was training myself to really finish-finish something this time around. I knew it was done after creating Nowhere, Girl. I was looking at some songs that were assembled in 2018 waiting to be released and I was like, “Aww, my babies deserve to be out there already.” So I did.

What’s the story behind the cover art? What made you land on this one for “The Odds”?

I wanted to portray Ruru as a comic book character. Sometimes when I don’t have anyone to talk to about a certain topic I would draw a scenario or a conversation on a comic strip. Each song is like a strip that talks about whatever topic. My piano teacher in grade school had a lot of comic books (Calvin Hobbes, Garfield, Peanuts, etc.) in the waiting room to keep me entertained while I would wait for my turn so I guess that was really embedded in me.

During the process of making this record, how would you say you’ve grown as an artist? What were your creative takeaways after finishing it?

I’ve learned to be patient and not give up on projects too easily. Take lots of breaks, don’t over-listen, don’t try to squeeze out creative juice when there’s just none. Live life, appreciate it deeply and come back and you can write about it again. When a project sucks, it’s not always terminal.

Did you always know that the stories/songs on “The Odds” would come together in this EP, or was it an organic, trial-and-error process?

It’s always been organic… Trial-and-error is my middle name. I’ve always been messy in that way but you gotta own it these days—whatever God gave you, you just gotta own it.

When you were creating the songs, what did your studio set up look like?

Some of the songs that began in 2018 I had done using only my Macbook 2015 model, a Blue Yeti mic, and a midi keyboard. That’s it. Now, I use an ASUS laptop because my Macbook only had two USB inputs and I was just gifted an audio interface. So there’s basically no studio hahaha. All the instruments in my songs were MIDI-ed on my keyboard (except guitars). Ya girl doesn’t have the money to set an entire studio up herself so she just wings it with VSTs. I take my set-up like a sketchbook. I do all the learning and mistakes here and then do most of the finalizing at the studio.

We know that Mellow Fellow is one of your frequent collaborators. We’re just curious if he was a part of creating this record in any way?

Yes, he was! I would bring my tracks to his studio and I’d ask him for his critique and he would help me mix and master some of my songs. My “studio set up” isn’t complete so I’d always go over to his place to listen to my tracks on his monitors. He would always be the one to slap me into reason especially when I’d be demotivated to work on music. We became each other’s support system in that way—cheering each other on, giving critique…

Read more: Mellow Fellow’s “cookie butter” is about saying goodbye to a lover

“The Odds” made us feel like we were living in your own memories for a few minutes, which is such an intimate feeling. What’s a record that makes you feel that way right now about an artist you’ve never met?

There’s just so many! Probably Trick by (Sandy) Alex G. His songwriting is just so tangible and the tunes I resonate with so much. Jagged sound, but with lyrics almost cipher-like, the experience is sandpaper but there is a window of tenderness every so now and then that is so satisfying and so well-earned.

Listen to “The Odds” here:

How Snapchat is making its comeback: Custom lenses

Believe it or not, last year, some people actually declared Snapchat as a...

SHAREFor its 14th year of voicing out the unheard of and singing the...