Being a K-pop fan for almost a decade, it was pretty groundbreaking to witness a historic moment in K-pop through BTS making their US television debut at the 2017 American Music Awards. Breaking records practically everywhere, BTS was able to successfully cross oceans and showcase how influential they can be. They held a torch representing Asian music everywhere and we’re definitely here for it.

While we’re a bit bummed that the quality of this performance of “DNA” isn’t (damn it, the camera work could’ve been done better) at par with their stages in Korea, it was still crazy to see the gravity of the entire performance.

What else did we enjoy watching BTS at the AMAs? We’ve got a bunch:

1. The boys having a good time watching the performances

Raise your hand if you had a mini heart attack after the camera panned in on the guys during Demi Lovato’s performance. Looks like they had a fantastic time and we’re nothing but happy for them. 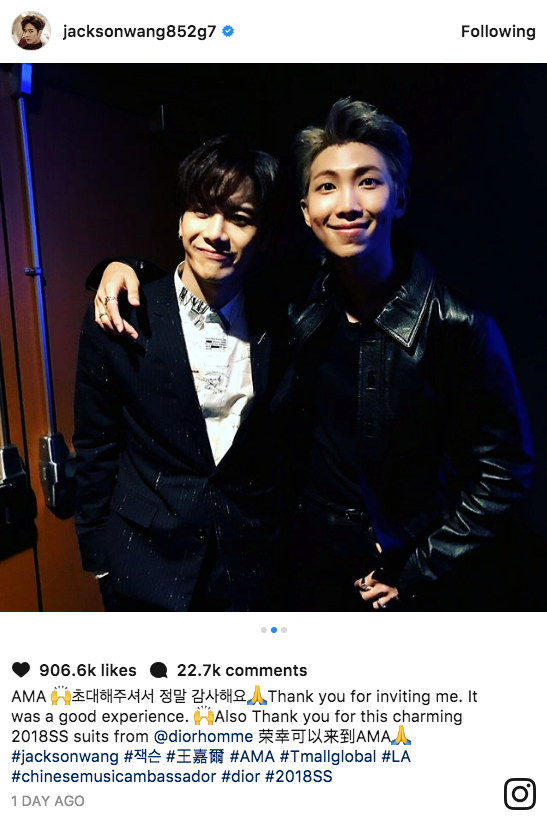 For those who didn’t know–GOT7’s Jackson was also in attendance at the AMAs. Known for being good friends with Rap Monster/Namjoon, the two made sure to meet up with each other and pose for this cute photo, which Jackson posted on his Instagram account. Glad to see that this bromance is still very much alive.

3. Celebrities were wowed by them

Jared Leto after BTS performed in the AMA’s.

“I need a moment to recover from that performance”

Though we’re still a bit salty that The Chainsmokers were the ones who introduced BTS’ performance, it was nice to see that other celebs piquing their interest in them, whether it’s Jared Leto being blown away by the show or Nelly Furtado wondering what their skincare routine is.

4. Ansel Elgort was their designated fanboy for the night

Ansel Elgort has actually met BTS in the past, and was finally reunited with the gang at the awards show. He took another photo with them at the event itself and posted it on his Twitter account. Ansel was also seen on [mega] fan mode during BTS’ actual performance and it was a cute moment for everyone to watch.

he literally just has a bag of snacks pic.twitter.com/RqIdlCSHzA

You’d think that people would try to act cool in their first time at the American Music Awards. But apparently, not BTS maknae Jeon Jungkook. In the middle of taking a group photo with #1 celeb fanboy Ansel Elgort, Jungkook was captured midway through eating a literal bag of snacks. It’s painfully apparent that this boy was not ready for a picture, had his mouth still full, and was literally just about to reach in his snack bag for more.

But I love him even more now (if you can’t tell yet, Jungkook is my BTS bias).

Also it seemed like he continued to eat throughout the AMAs, even while jamming through the show. Never change, Jungkook.

In an interview with ET, the boys talked about how important ARMYs are to them and how their fans always come first. They ditched the AMAs after-party to hang out in their hotel room and do a V-Live with ARMYs to talk about what went down at the awards show. Unfortunately, they didn’t let Jungkook drink the champagne. Boo.

It sucks that they edited out the ARMY fanchants but we’re still glad to see that they pulled through at such a big event as this. Western websites and blogs were even wondering what the ARMY bombs were.

SHAREBy Celene Sakurako Fugu Musk, for those who don’t know them yet is...