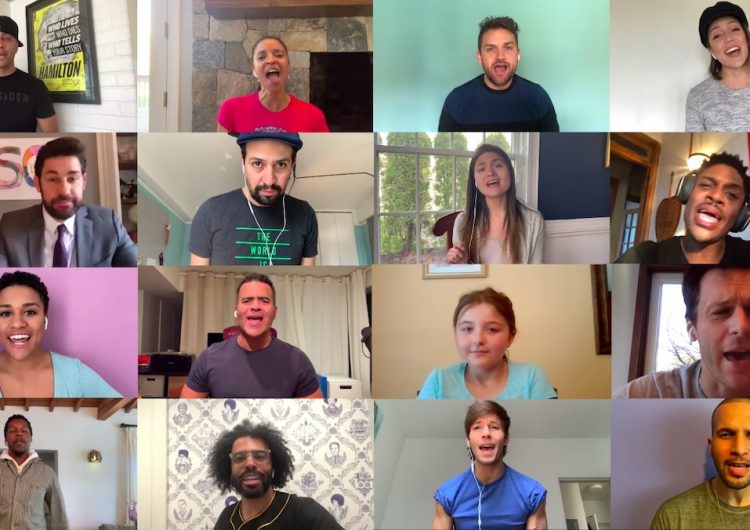 Little acts of generosity are what the world needs right now. After the release of a never-before-heard track, “Hamilton” fans are getting their daily dose of joy from Lin-Manuel Miranda and the Broadway run’s original cast, thanks to a one-off reunion performance via Zoom.

On the second episode of John Krasinski’s YouTube show “Some Good News,” the actor had a little surprise for a young “Hamilton” fan named Aubrey, who missed her show due to the recent cancelations. After learning that the nine-year-old had opted to watch “Mary Poppins Returns” on TV in lieu of “Hamilton,” Krasinski brought out Mary Poppins herself—his wife, Emily Blunt.

In “Mary Poppins Returns,” Blunt stars alongside “Hamilton” showrunner, Lin-Manuel Miranda. “Obviously, he’s not the best part of it, he’s more like a backup dancer,” she jokes, which then prompts Miranda’s so-called “Zoom bomb.”

Read more: We can legally stream “Hamilton” by 2022

“Since you couldn’t go to ‘Hamilton,’ we’re bringing ‘Hamilton’ to you,” Krasinski says, who proceeds to what may be the best consolation to a canceled ticket. Accompanying Lin-Manuel Miranda on the legendary Zoom call is the rest of the original Broadway cast, including Leslie Odom Jr., Daveed Diggs, Christopher Jackson, Anthony Ramos, Philippa Soo, Jonathan Groff and the ensemble, performing the show’s opening number “Alexander Hamilton.”

Just like Aubrey, consider our days made. Check out the performance and rap along below:

Screenshot from “Some Good News”

We all loved actor Nam Joo Hyuk as the adorable and playful feminist...