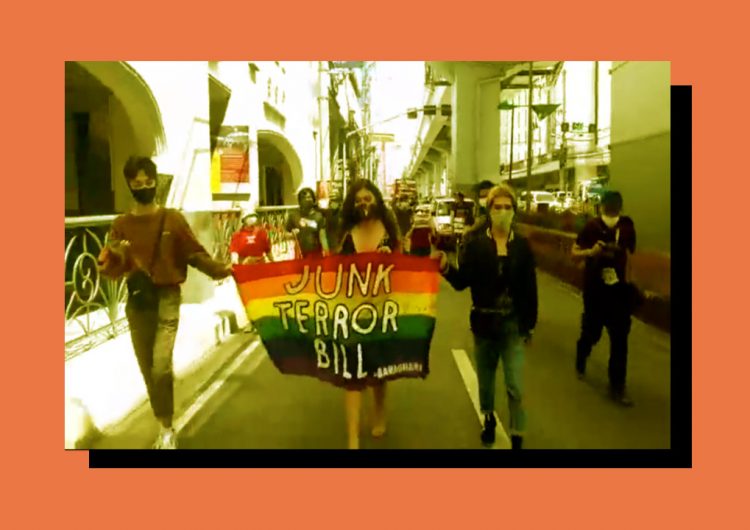 Pride is a worldwide celebration of our LGBTQ+ community. But people seem to forget that it’s a protest as well. Fifty-one years ago, transgender activists like Marsha P. Johnson, Sylvia Rivera and Miss Major paved way to pride celebrations we still cherish today.

Today, June 26, LGBTQ+ organization Bahaghari carried this 51-year-old tradition by holding a Pride Protest in Manila’s University Belt. But it ended on a bitter note when police arrested 20 participants.

Ten LGBTQ+ folks, eight allies and two drivers were detained at the Manila Police District Headquarters on UN Avenue. In a tweet, the College Editors Guild of the Philippines said that the police violently dispersed protestors while the Union of Journalists of the Philippines-UP confirmed that authorities haven’t given any information on what laws were violated.

According to the UP Office of Student Regent, protestors were peacefully marching while practicing social distancing. Bahaghari National spokesperson Rey Valmores-Salinas said they asked the officers for their names as well as their violations but didn’t get a coherent response.

PRIDE IS A PROTEST. #FreePride20!

At least 20 individuals, including UP alumni, who participated in today’s Pride March were arrested without any warrant or clear charges. Protesters peacefully marched against tyranny while practicing physical distancing. #SulongWagPatinag

These pigs don't know what case to file against us BECAUSE WE VIOLATED NOTHING. #FreePride20 https://t.co/s4cfsQTVsr

According to Bahaghari’s tweet, Cong. Sarah Elago of Kabataan Partylist, Cong. Eufemia Cullamat of Bayan Muna and Atty. Fudge Tajar went to the police district to address the arrested participants. The 20 participants are still in Manila Police District Headquarters as of writing.

NOW: Cong. Sarah Elago of @KabataanPL, Cong. Eufemia Cullamat of @BayanMuna, and Atty. @fudgetajar are present at the police district to address the illegally arrested members of Bahaghari and various bold organizations.#FreePride20 pic.twitter.com/nJpjoVDXrL

June is more than just another month for the LGBTQ+ community. It’s a celebration of identity and a continuing fight for our rights. So if anyone says Pride March is just a block party, remember this incident.

Read more:
Learn about the T in LGBTQ+ with this pay-what-you-can guidebook
These five LGBTQ+ books portray issues that we should know about
Why is the rainbow gay?

SHAREElection season is here, and our streets are going to be filled yet...