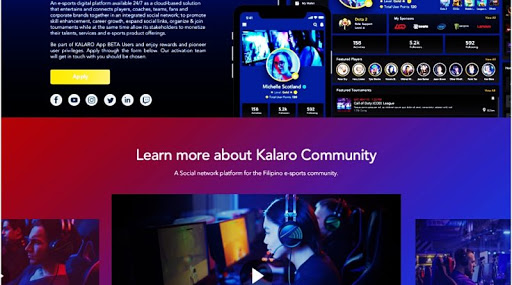 ESports in the Philippines is thriving. With 27 million players nationwide, we are riding the wave of its golden age in Southeast Asia. Multiplayer online role-playing games are going beyond the spaces of our barangay’s computer shops—and our love for it won’t stop anytime soon.

That’s why the folks from The Asia Group Incorporated made an app just for us. Meet Kalaro, your future go-to social media app for everything ESports.

“Our goal is to create a central hub for esports entertainment and at the same time, support budding and expert Filipino ESports e-athletes to excel through the active support from the esports community, and sponsorship from corporate brands,” says software architect Jun Lasco Lasco in a press release.

Kalaro aims to be a virtual hub to hone gamers’ skills. It’s for gamers, coaches, teams, influencers, team owners, leagues and especially ESports fans. Although it’s not the first of its kind, it’s a huge step for Filipino ESports to create a platform for this community.

Who knows? Maybe it has the potential to be our own Twitch. Quite possibly, our answer to platforms like Steam.

Read more:
ESports will soon become an academic course at this local university
The up, down, left, right, of ESports according to a pro-gamer
This Filipino esports team is competing worldwide for P26M

SHAREThanks to Twitter, the quarantine saw the age of a gazillion Picrews. Now,...